Do send in your photos if you have good ones. Today’s batch contains recent owl-related photos taken just recently by Paul Matthews in Canada. Paul’s notes are indented, and you can enlarge his pictures by clicking on them.

These photos were taken in the Ottawa area in Canada. The first series is from November 20, 2021, and the second (boreal owls) from December 5, 2021.

With winter on the doorstep, my first encounter of the season of a Snowy Owl (Bubo scandiacus) was a memorable one. The presence of an owl usually greatly upsets the other birds in the vicinity, who will surround the owl in an aggrieved, even hysterical group, calling insistently (a behaviour known as mobbing). I don’t think mobbing is well understood. It often seems rather ineffectual, as the wise owl (see what I did there?) will simply wait out the harassment till its tormentors lose interest and go back to their normal activities. That said, a small to medium-sized owl being mobbed by little rather powerless passerines is one thing, and a medium to large owl being mobbed by ferocious corvids (crows and ravens) quite another. While I’ve never seen a corvid actually strike an owl during mobbing, the dive-bombing and other mock attacks within centimetres of an owl’s head must be very unsettling. 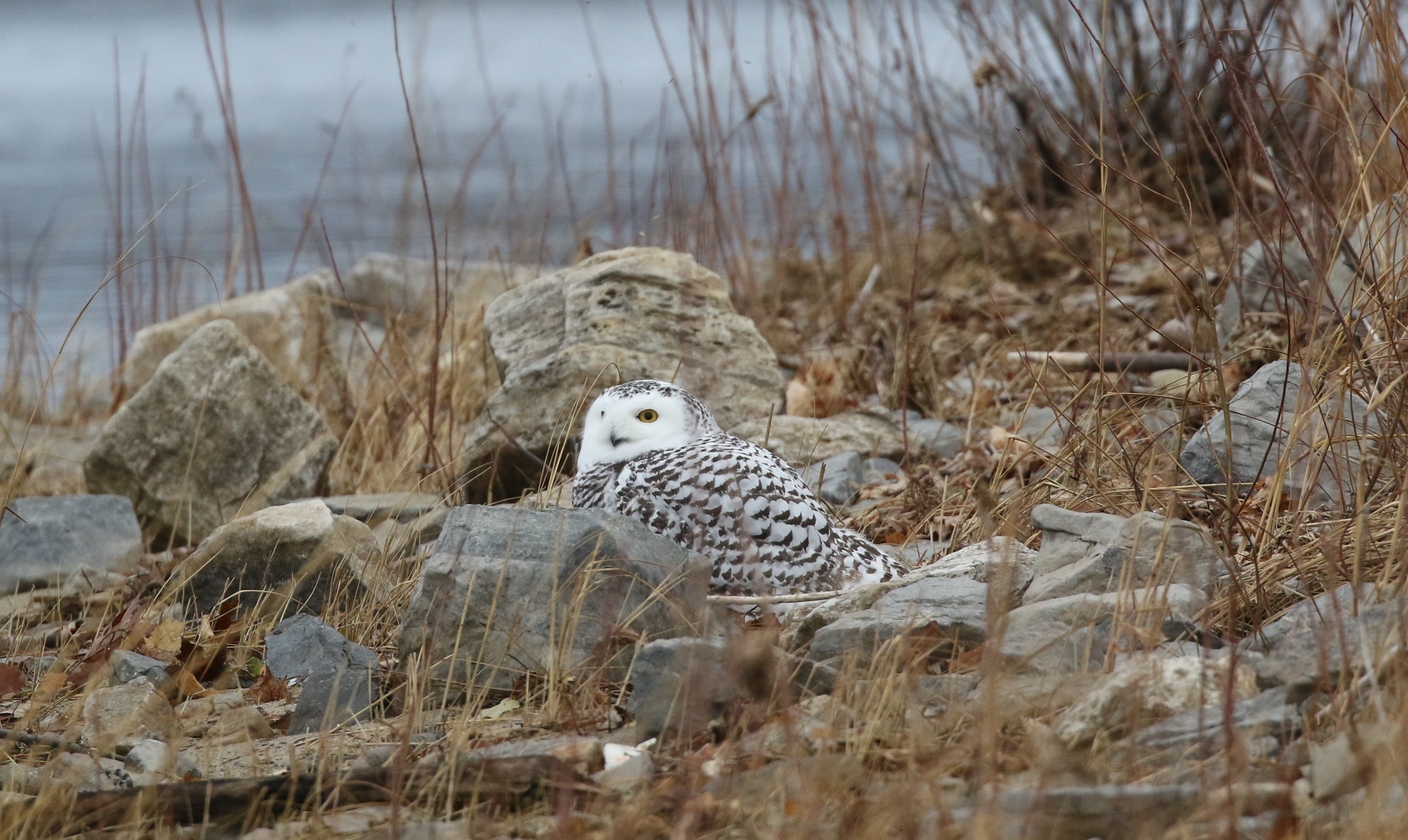 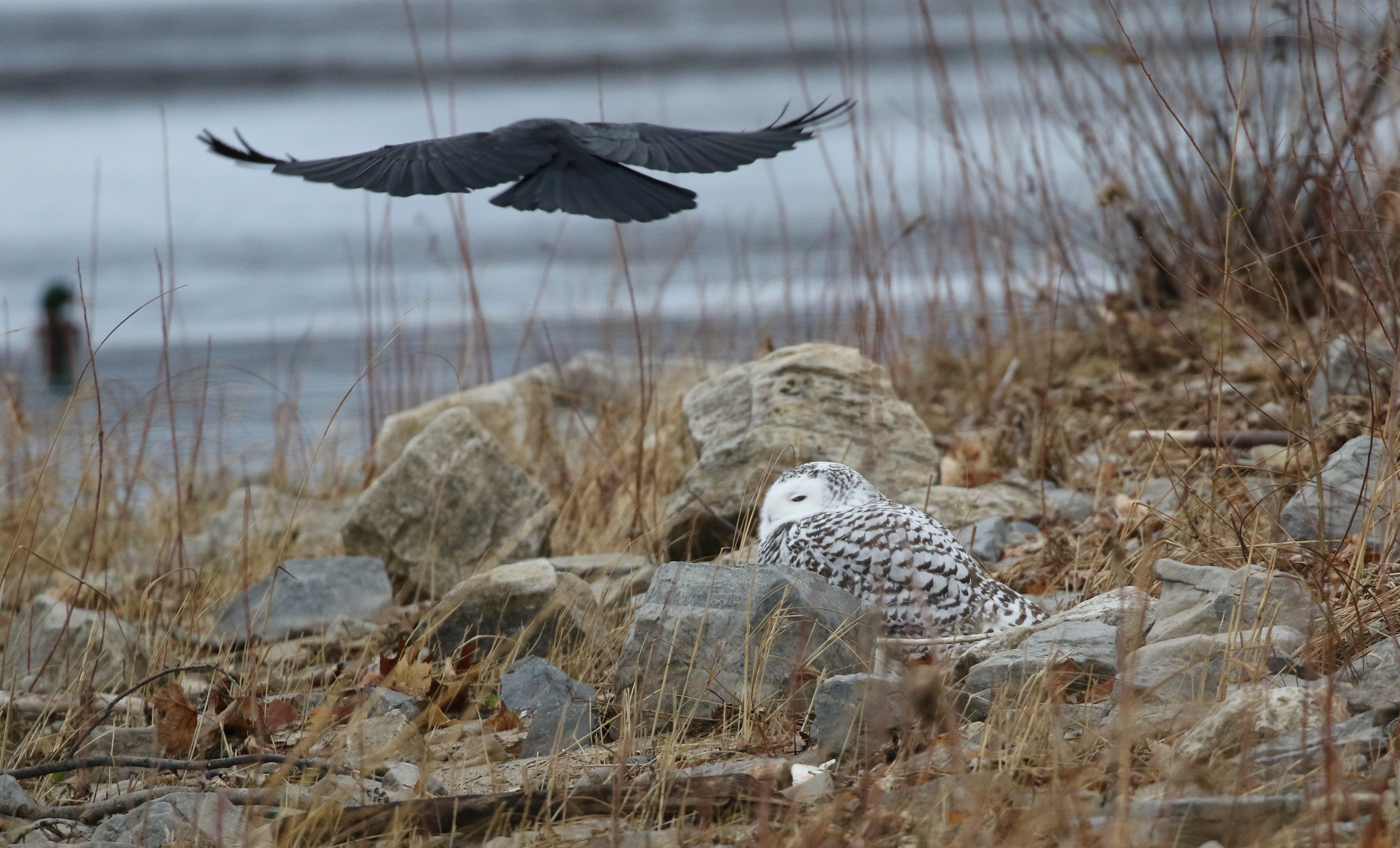 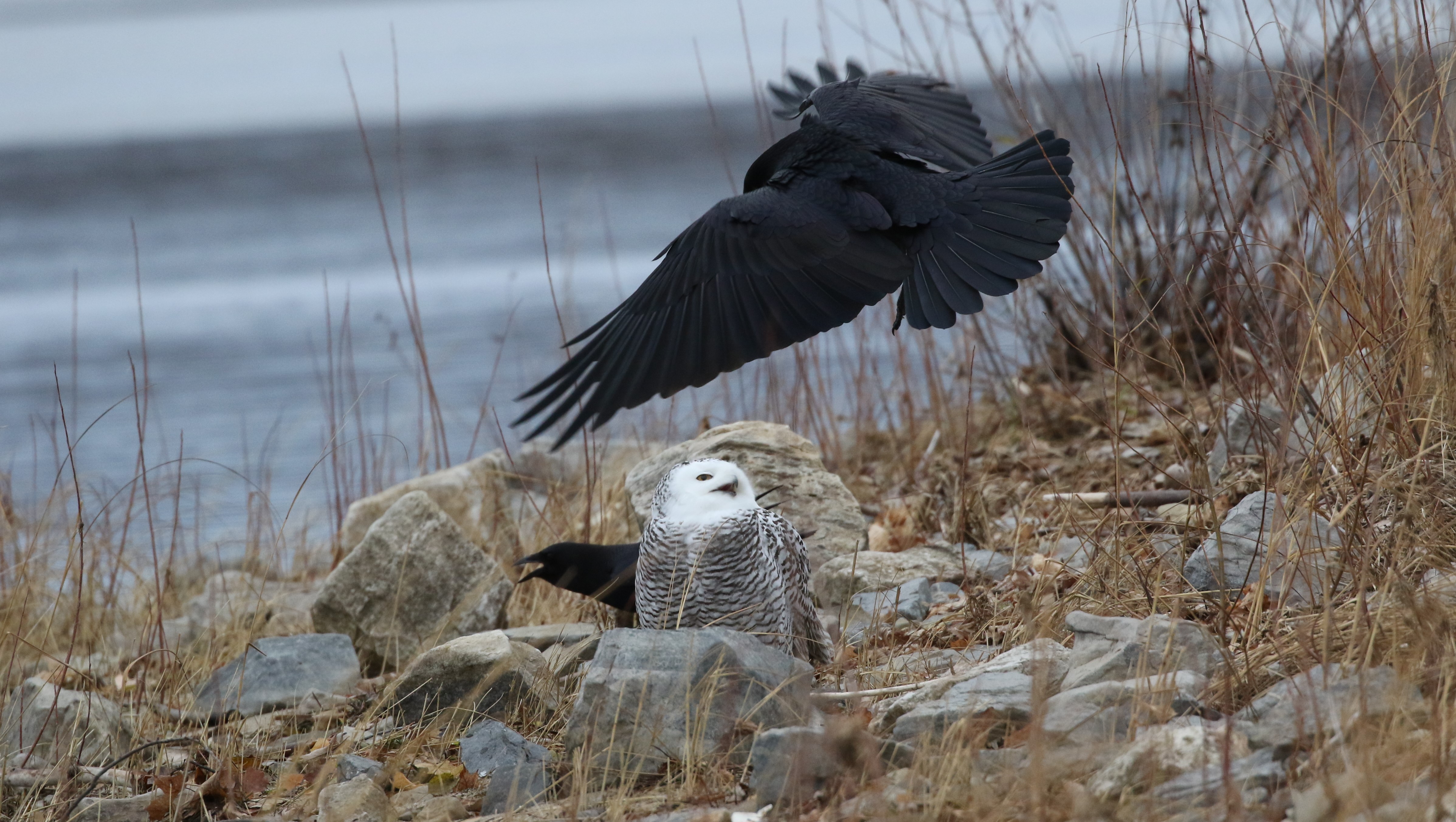 This snowy owl was also mobbed by Ring-billed Gulls (Larus delawarensis), American Crows (Corvus brachyrhynchos) and one Common Raven (Corvus corax). The raven really got in the owl’s face. Ravens are large birds with quite an imposing bill (compare with the smaller-billed crow in the background of one of the photos), but snowy owls are the heaviest North American species of owl and have rather fearsome weaponry. I really wondered whether the raven knew what it was doing but, as I returned to my car, I noticed it flying away, apparently unscathed. The owl, by the way, is likely a young female given the extensive barring. As with all owls, female snowies are larger than males. By the way, there is a mallard (Anas platyrhynchos) in one of the photos. Can you spot it? 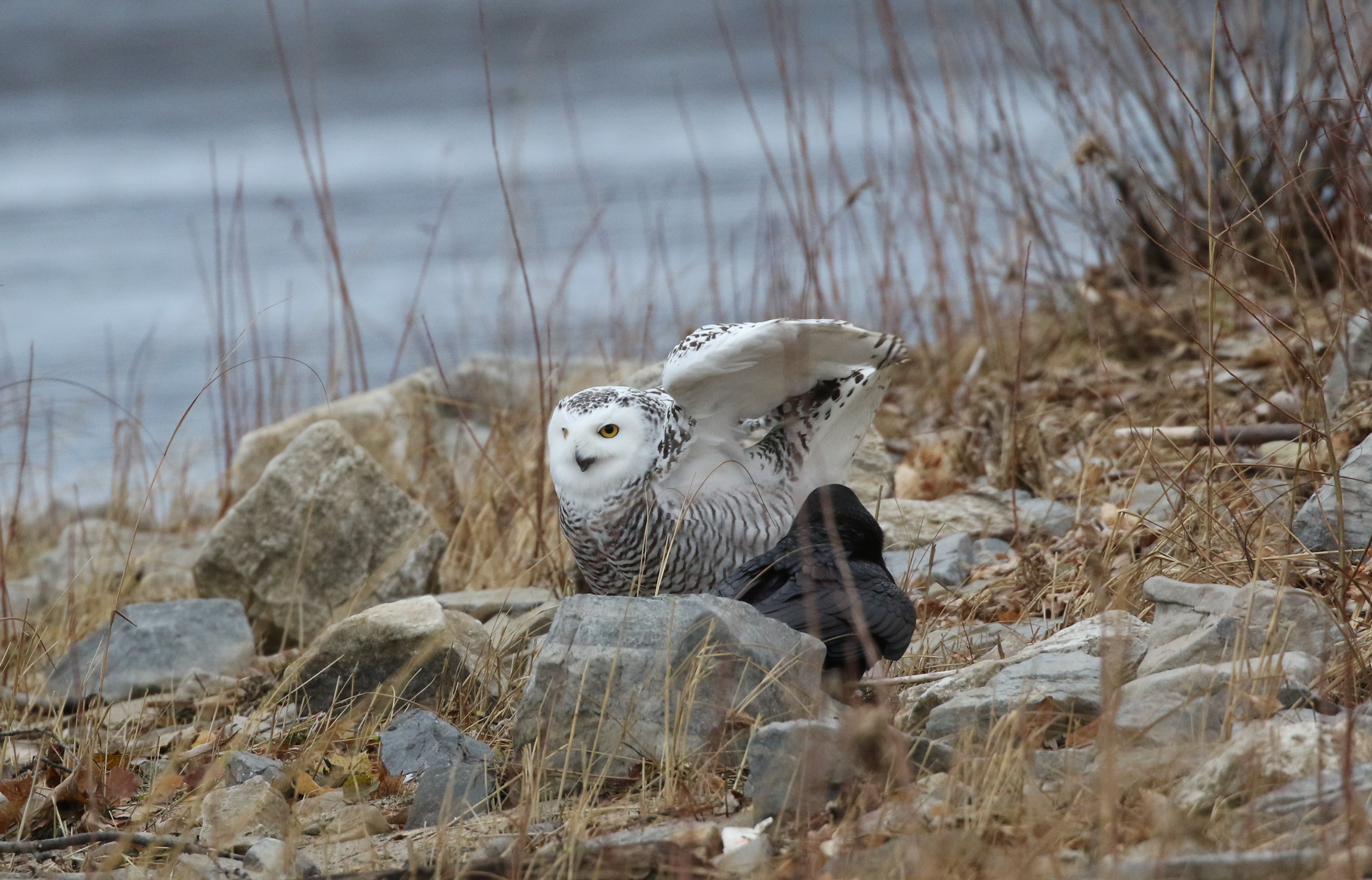 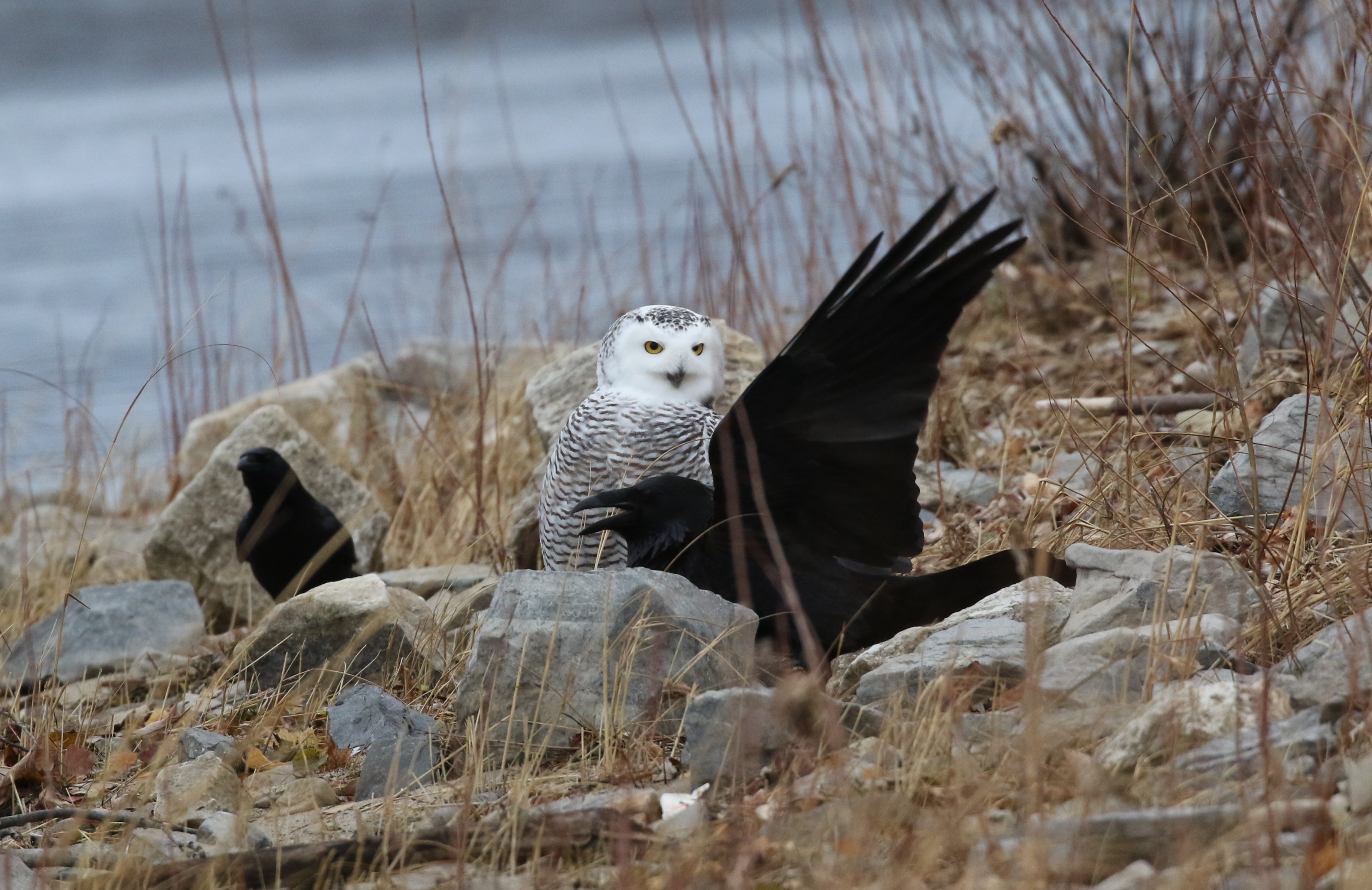 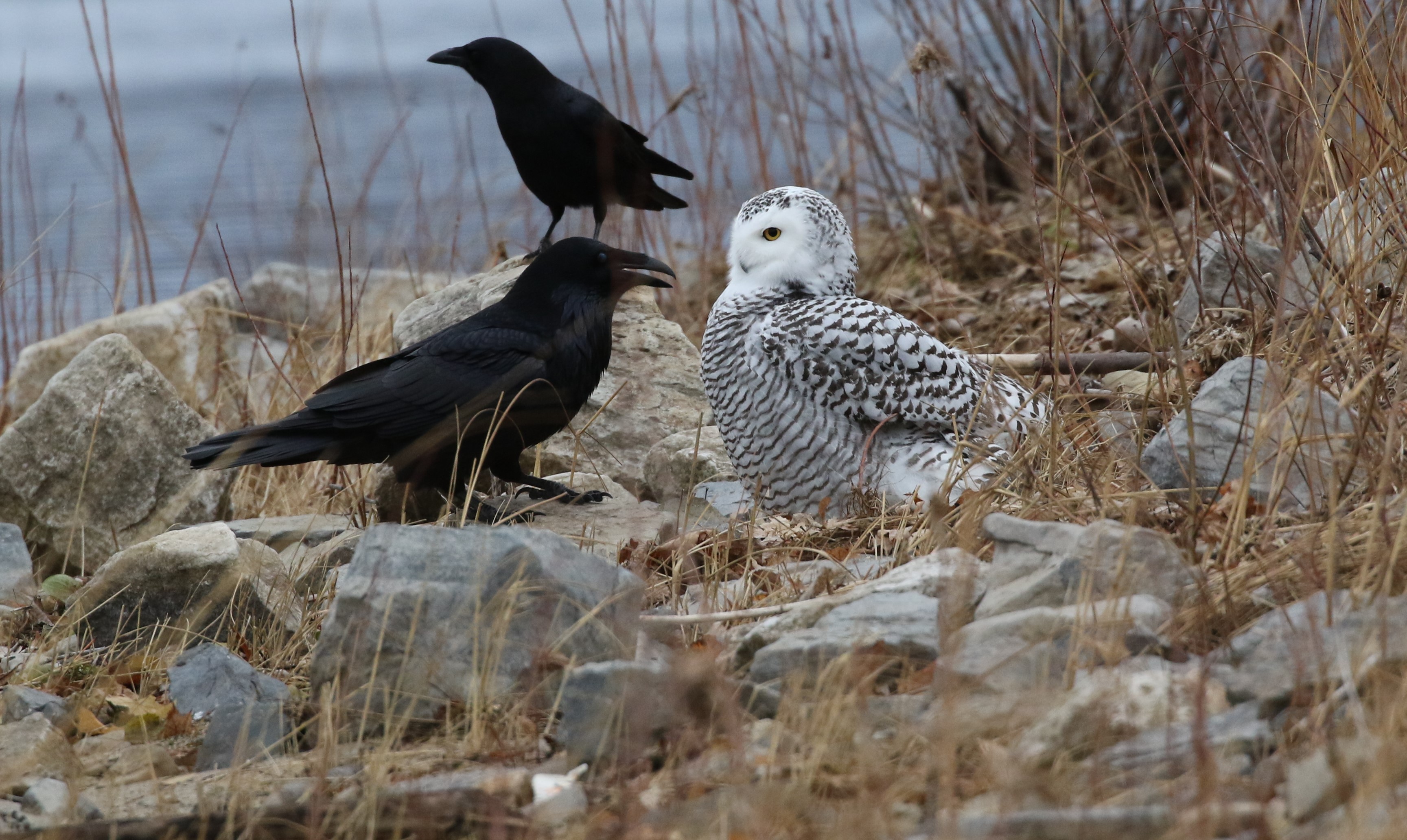 As lagniappe (a word I learned from WEIT), I offer another winter owl, much smaller than the snowy: a Boreal Owl (Aegolius funereus). This is the least frequently encountered of our regular owls, much sought, and I hadn’t seen one in several years. It tends to be very well hidden. If you’ve been paying attention you can probably guess how it was discovered: yes, it was being mobbed (by chickadees). 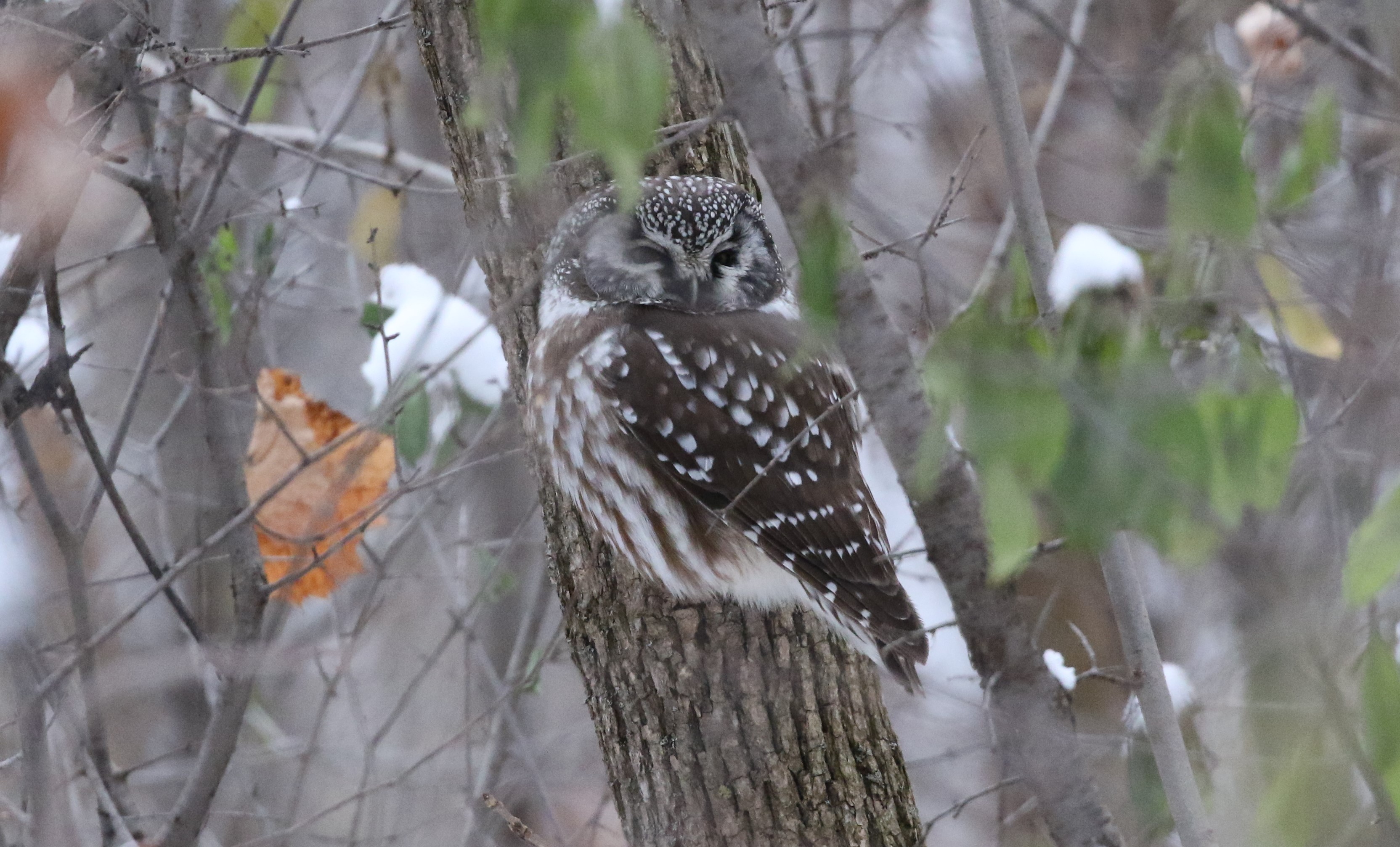 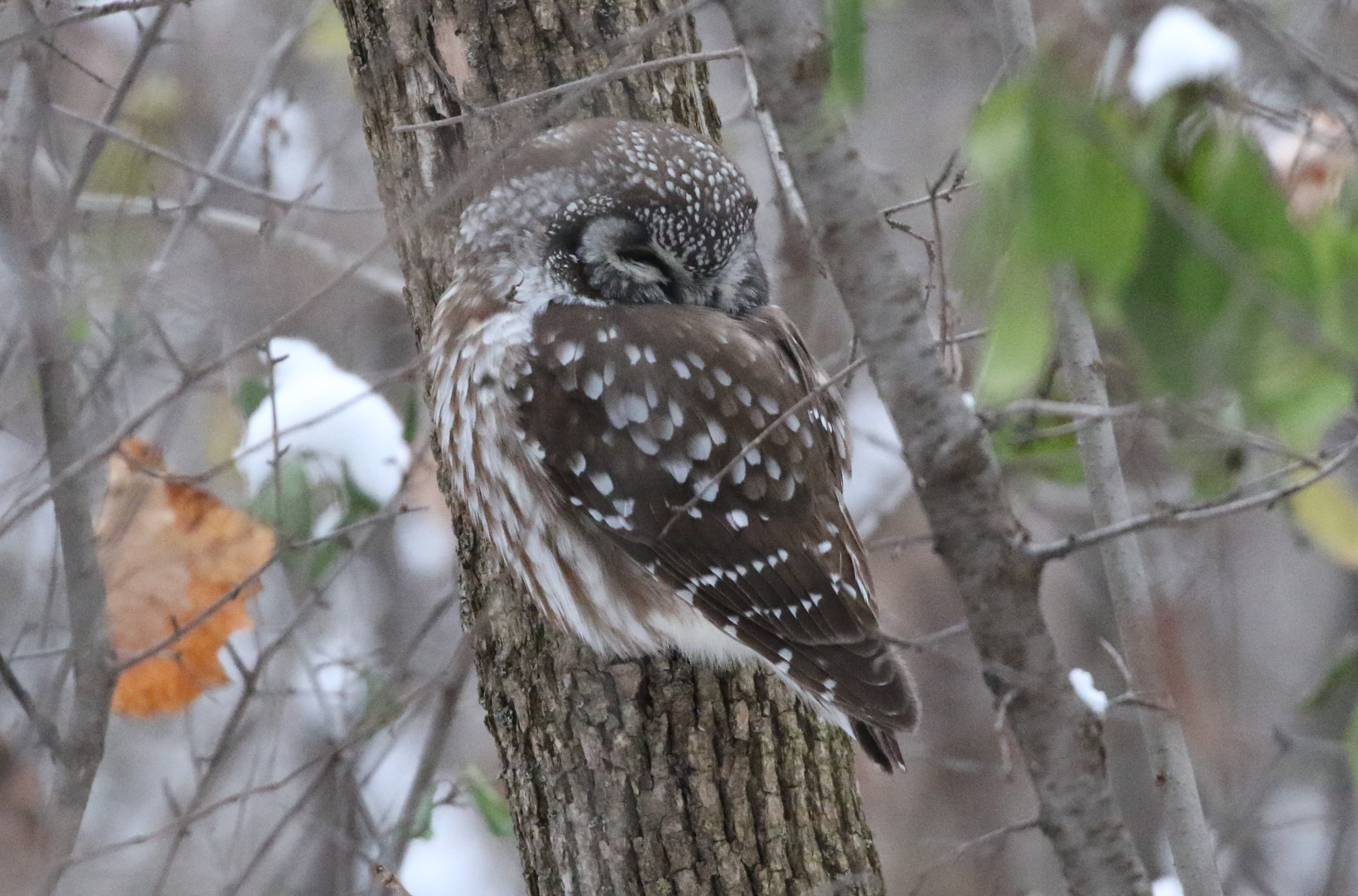 Did you spot the raven?