Here’s a renegade scientist described by Canada’s conservative National Post, which must love articles like this.  It is the tale of a person of color—Patanjali Kambhampati, an Indian physical chemist at McGill University who seems quite accomplished. He works on “quantum dots“, which are tiny semiconductors, has published 132 papers, on many of which he was first author, and has an “h index of 37”, which means he’s published 37 papers that were each cited 37 times or more. (The higher the index, the more widely you’ve been cited.)

One other relevant fact besides his scientific quality: he’s been subject to racism since he moved to North America from India at age four. He reports that he’s been verbally harassed, beat up constantly, and has been “harassed by U.S. border guards and racially profiled in Canada, too.”

But his scientific quality, his “person of colorhood”, and his oppressed past haven’t helped him get grants from the Canadian government. Why? Because he refuses to write the kind of woke diversity statement that the Canadian grant authorities demand. 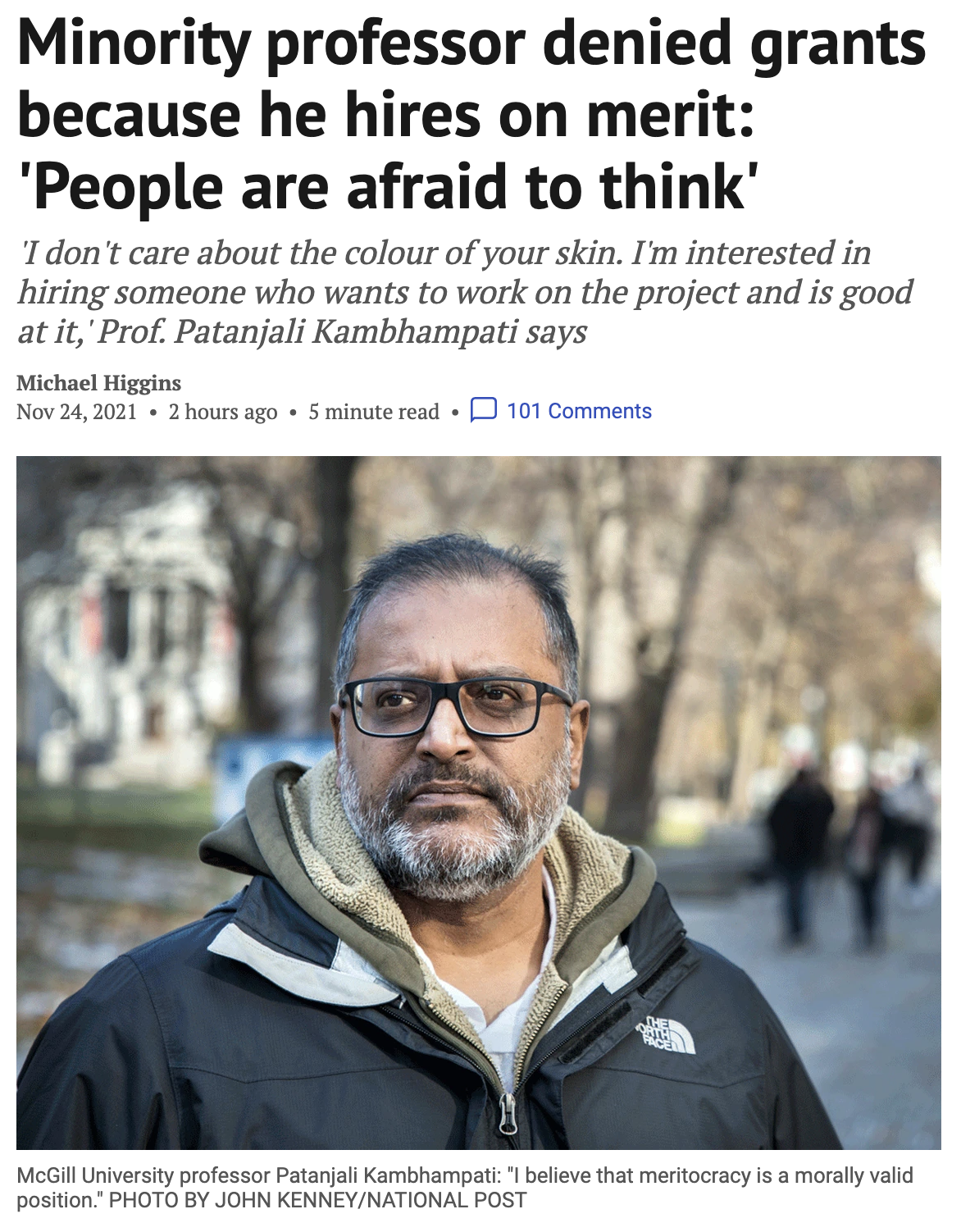 Kambhampati has been turned down for his last two grants because of insufficient diversity statements, which are mandatory. And in Canada, if you don’t past muster with that statement, your grant gets canned without even being evaluated for scientific merit. I quote from the article, and I’ve put his terse diversity statement in bold:

Patanjali Kambhampati, a professor in the chemistry department at Montreal’s McGill University, believes the death knell for the latest grant was a line in the application form where he was asked about hiring staff based on diversity and inclusion considerations. He says his mistake was maintaining that he would hire on merit any research assistant who was qualified, regardless of their identity.
“We will hire the most qualified people based upon their skills and mutual interests,” Kambhampati wrote on the application.

“I’ve had two people say that was the kiss of death,” said Kambhampati. “I thought I was trying to be nice saying that if you were interested and able I’d hire you and that’s all that mattered. I don’t care about the colour of your skin. I’m interested in hiring someone who wants to work on the project and is good at it.”

Kambhampati said he didn’t go public after the first grant was rejected but decided to speak out now because the increasing use by the government of equity, diversity and inclusion, aka “EDI,” provisions, as well as woke culture, are killing innovation, harming science and disrupting society.

“I believe this is an important stand to make. I will not be silenced anymore,” he said.

It is the kiss of death, for prizing merit above race, but being color-blind in your hiring (the now-outmoded view of Dr. King), is not the way to succeed. To get these grants, I’m assuming that your diversity statement has to including some affirmative action, which means elevating members of oppressed minorities above those whose indices of merit used by the school are higher.

Like Dorian Abbot at the University of Chicago, Kambhmpati believes in hiring solely on merit.  While I don’t adhere to that 100%, I adhere to it more than I do to the Canadian or University of California hiring systems, which use the DEI statement as a first-step “up or out” gateway to funding.

Because both applications were rejected at the bureaucratic level, it means that neither proceeded to the step where they would be forward to other scientists to review Kambhampati’s proposals.

But Kambhampati said he believes basing his hiring decisions on merit is a valid, moral position to hold.

The salt in his wound is the huge funding that Canada recently gave for a dubious project on preventing cancer using “indigenous healing practices” (for more on that, see the news section in this recent post of mine).  The National Post says this:

Around the same time that Kambhampati’s latest application was turned down, another arm of the government, the Canadian Institutes of Health Research, gave Dr. Lana Ray, a professor at Lakehead University in Thunder Bay, Ont., a $1.2-million grant to study cancer prevention using traditional Indigenous healing practices. When the award was announced, Ray said “We need to stop framing prevalent risk factors of cancer as such and start thinking about them as symptoms of colonialism.”

As I said, Canada is woker than the United States. In terms of DEI statements and hiring they’re about equal, but to me Canadians seem more timorous about standing up to metastasizing Wokeism. Kambhampati did, but he’ll pay the price, because without outside funding, you can’t do experimental science.