I hope your Caturday is a good one, and that if you have a moggy it’s well fed and warm. Today we have our usual trifecta of felid items.

From the Siberian Times, of all places, we have an account of a man rescuing a kitten of my favorite wild felid, the Pallas’s cat, also called the manul (Otocolobus manul).  Click on screenshot to read: 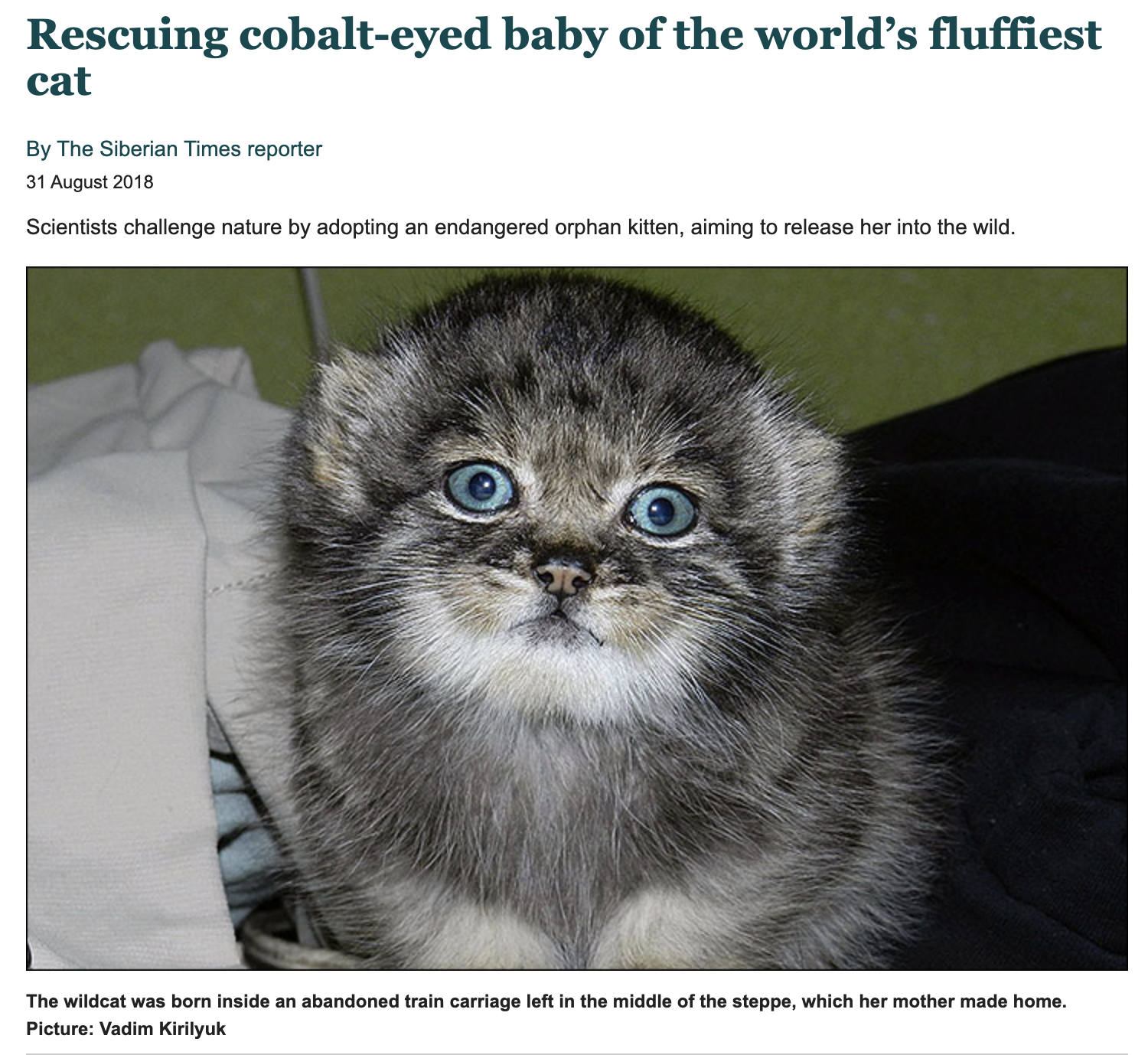 How the kitten was isolated (I believe that many species of cats, if not all, are born with blue eyes. Certainly housecats do, and the manul above, and even baby tigers have blue eyes).

Dasha the baby Pallas’s cat was less than a month old when she was found meowing in the grass of Daursky Biosphere reserve in Trans-Baikal region.

These wild animals are the fluffiest but also the most shy – and aggressive  –  small cats on the planet.

Cute, yes but experts insist you should not try to domesticate them, because you will fail.

With Dasha there is another problem.

The wildcat was born inside an abandoned train carriage left in the middle of the steppe, which her mother made home.

Workers started to move the carriage around, not realising there was a family of cats, which forced the mother to abandon it. 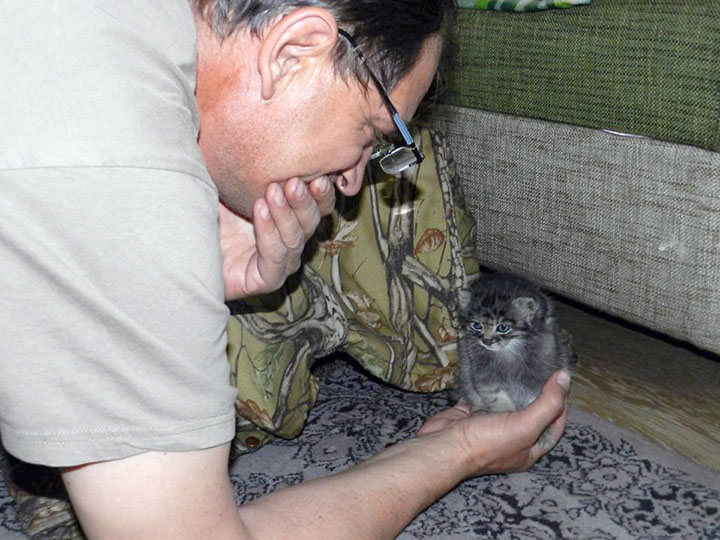 Dasha spent several lonely days inside the carriage. Eventually she managed to climb out and gave a shout’, said scientist Vadim Kirilyuk, the reserve’s director.

‘This is how we realised we had a pet on our hands, which had to be rescued.

‘One of the biggest tasks was to figure out how to feed the hungry almond-shaped blue eyed fluff ball.

‘Experienced colleagues from Moscow Zoo suggested we used a syringe for both food and drinks.

‘We had to force her to drink, so that she didn’t die from dehydration.

‘She was tiny and worryingly weak.’ 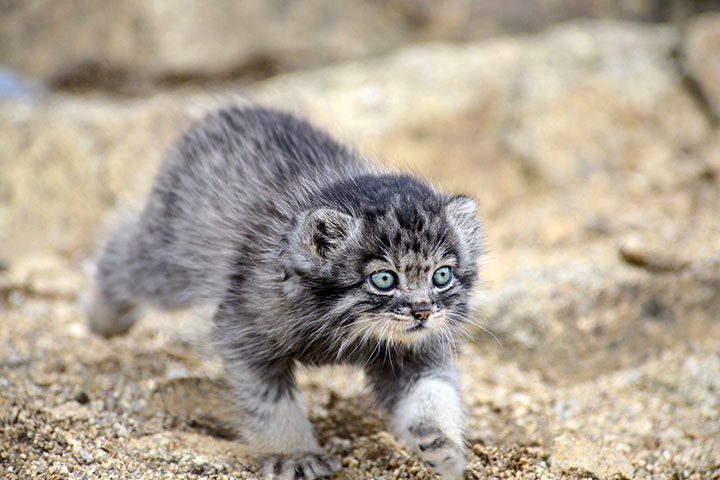 They brought up Dasha, feeding her by hand and with a bottle, and eventually she thrived and her eyes turned yellow. They plan to release her into the wild, as Pallas’s cats are threatened.

The scientific team’s ambition is to make sure that Dasha can be let back into the wild despite starting her life with humans, which can be a very tricky task given she never had a ‘proper’ wild training.

Vadim, who has been documenting Dasha’s progress from day one, said: ‘After three months of constant care and worries the day has come to say that young female Pallas’s cat Dasha will be free, but still supervised.

‘She is not ready to live on her own yet.’

The Pallas’s cat, small, fluffy and very discreet has been classified as Near Threatened on the Red List of Vanishing Species due to prey base decline and hunting.

In Russia, the secretive and poorly-researched animal lives in Trans-Baikal region, along with the republics of Buryatia and Tyva, and the Altai mountains.

Dauria Nature reserve reported growth in number of cats of their territory to over 100 in the last two years.

A few more photos. Notice the change in eye color: 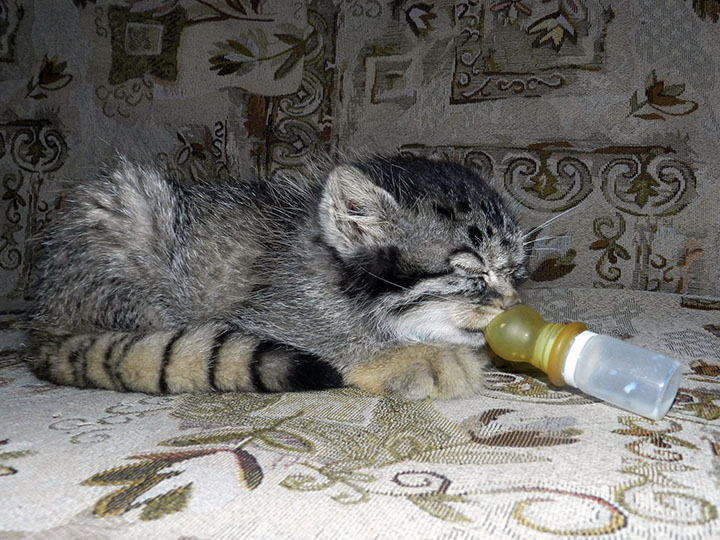 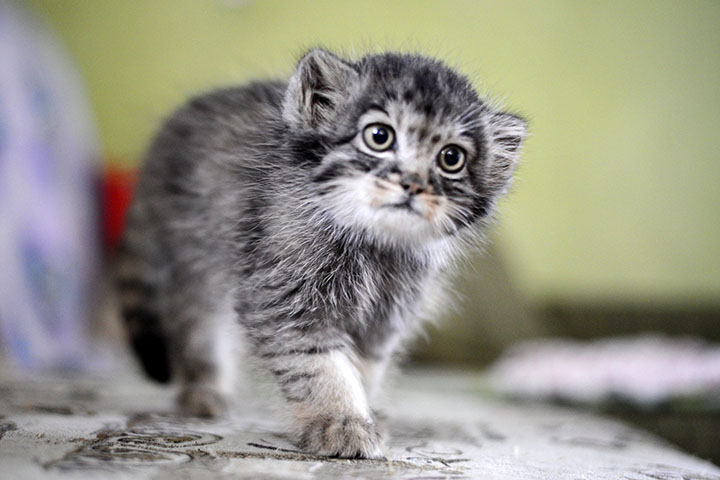 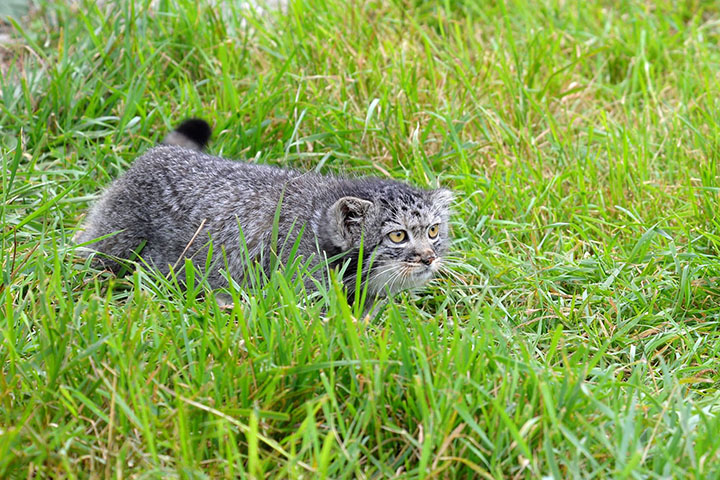 And this is what Dasha will grow up to look like: 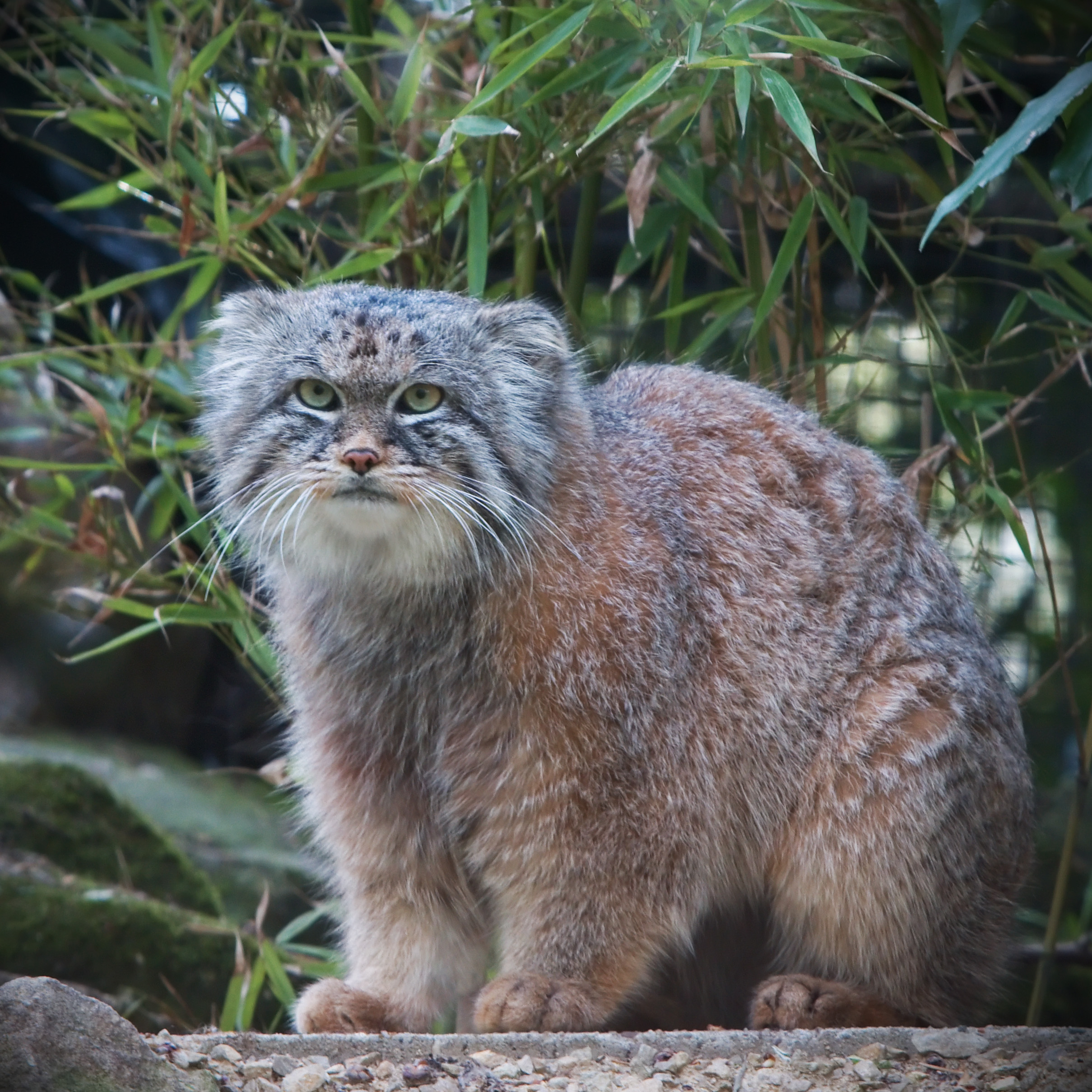 This article from the AV club contains a self-explanatory video (below).

YouTuber Liam Thompson has a nearly 20-year-old cat named Frodo who’s long enjoyed a daily routine of walking down a set of stairs to lie in his backyard’s best sun patch. The only issue is that Frodo’s mobility isn’t what it used to be, and he struggles to get up and down stairs. Rather than force his elderly cat to suffer the indignity of requiring a human’s direct assistance to get to his sunbathing spot, Thompson went ahead and built the little dude an elevator instead.

Liam must really love Frodo, for look at all the trouble he goes to to build that elevator. What I want to know is how the cat gets back up! Click the title below to see the article, but by all means watch the video.

This heartwarming tale is from the Washington Post. It started with a woman running a retirement home bringing a box of kittens into her office, for she was fostering them. Little did she know she’d created a monster. Click the screenshot to see the story:

The litter was brought to the care center by Meridian business manager Lori Irby, who said she knew she was on to something the first time she carried a box full of kittens into work in 2019.

Irby was a new ASPCA foster caregiver for kittens that were abandoned at animal shelters near her home in Orange County, and she set up a playpen in her office to make it easier to feed the kittens every few hours, she said.

When several residents found out she was caring for the fuzzy kittens, the cat was out of the bag, so to speak. They began stopping by and asking if they could see them.

Who wouldn’t want to see them? Everyone but miscreants loves kittens! And thus began Kitten Therapy Day:

After ensuring that the seniors didn’t have cat allergies, Irby, 51, held her door open and told them to come in for some kitten therapy.

“To see their faces light up when they held the kittens was really heartwarming,” Irby said.

“There was one resident in particular who was suffering from PTSD and depression, but when she picked up a kitten, she instantly changed,” she recalled.

“She was smiling and calm for the first time in a long time,” said Irby. “I thought, ‘What if we were to offer the same experience to everyone?’ ”

With help from the Meridian’s activities director, Irby began scheduling “Kitten Therapy Day” every Wednesday in one of the center’s gathering rooms.

As you can imagine, it’s quite therapeutic for many: 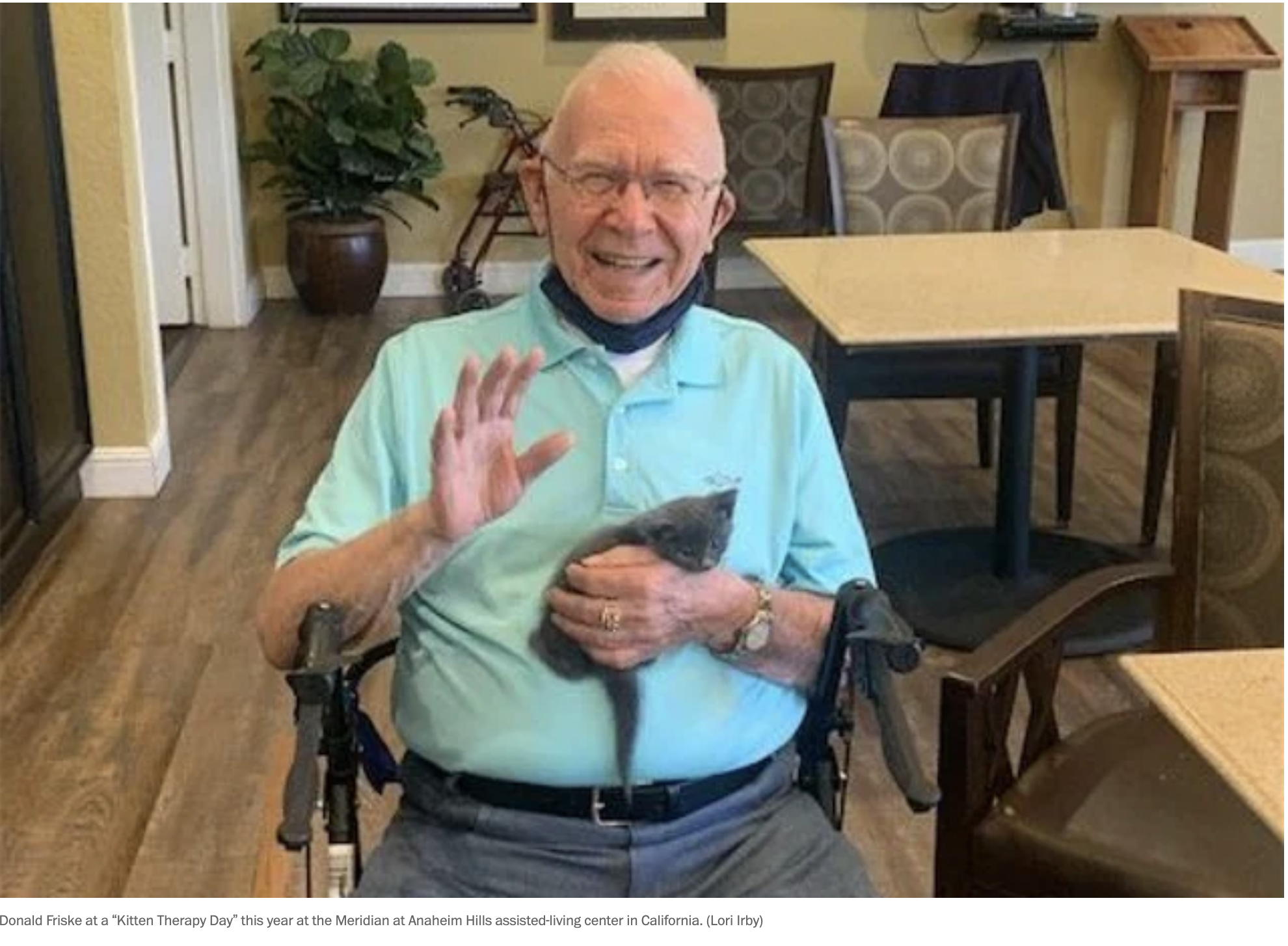 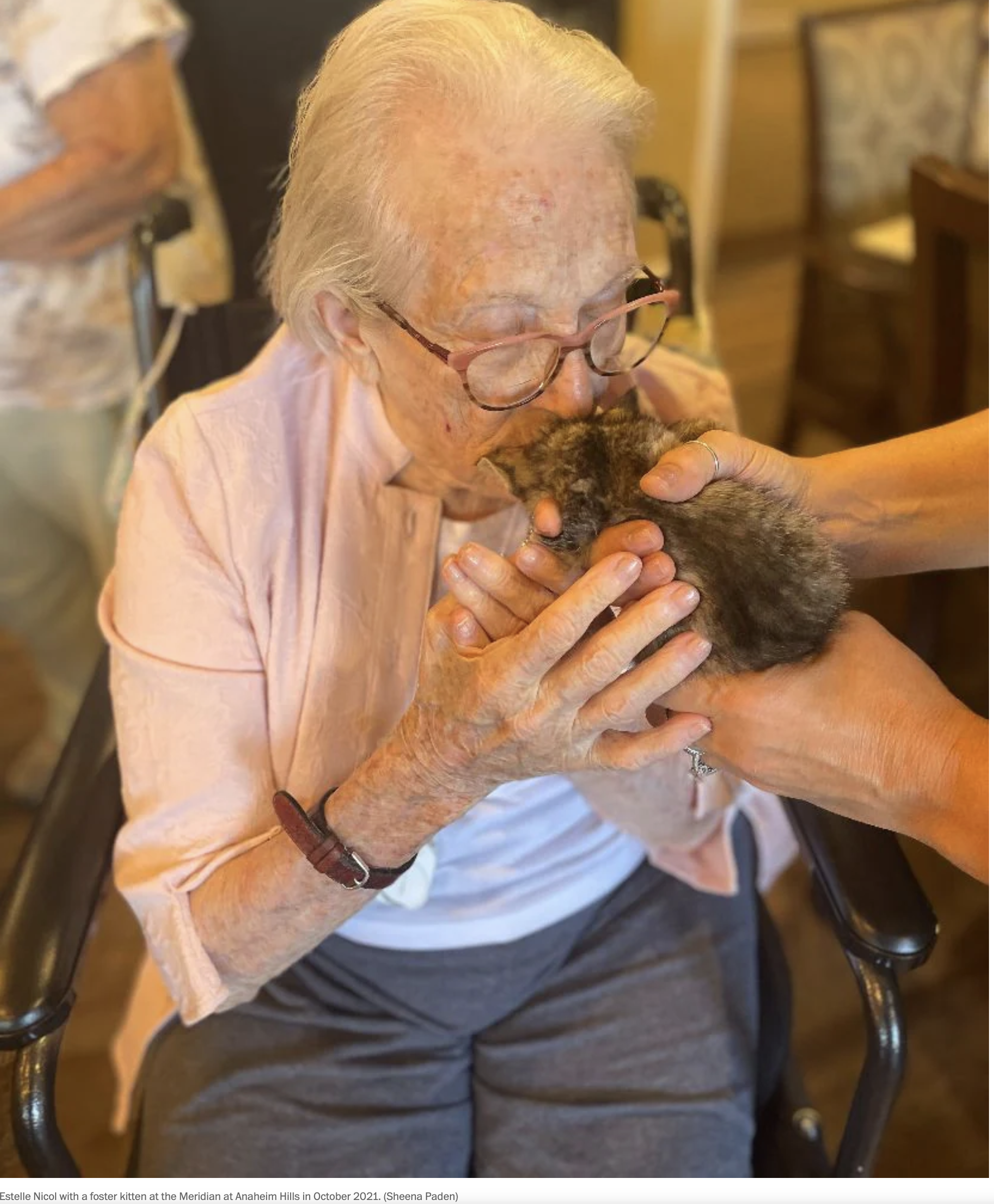 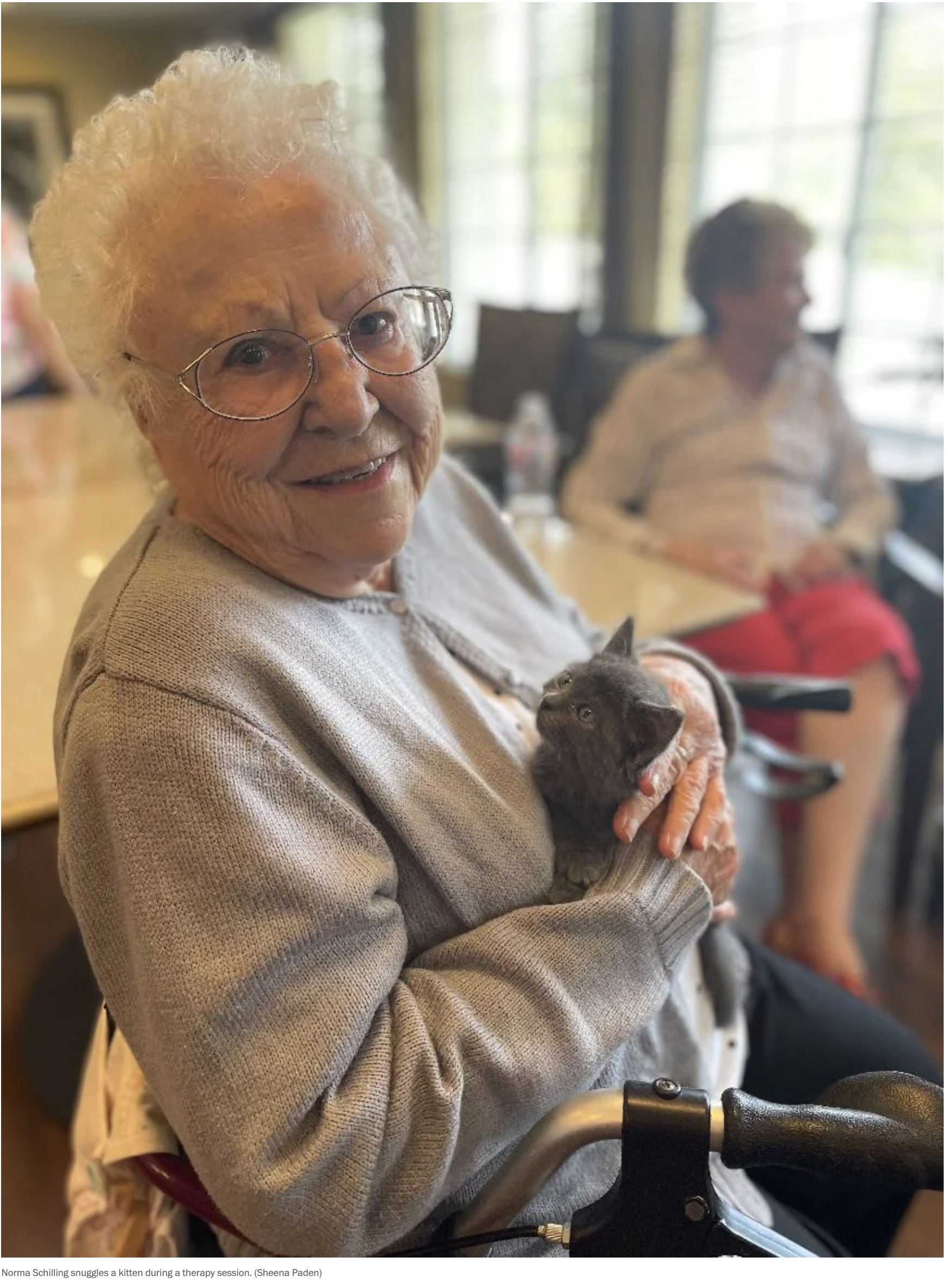 Irby often puts a few kittens in a stroller and wheels them to residents who want to see the kittens but can’t leave their rooms. She said residents in the memory-care part of the building particularly enjoy the visits

And it’s great for the kittens, too.

Felines that interact with humans when they are between 2 and 7 weeks old learn not to be afraid of people and are more easily adoptable, said Tina Fried, director of Los Angeles volunteer and kitten programs at the ASPCA.

“There’s a very short window to get them socialized,” she said. “Everyone wants the ‘cuddle’ cats — the ones that will sit on a lap and like to be played with. So what Lori is doing is actually helping to save kittens and get them into homes.”

The foster kitten program that Irby participates in has saved the lives of more than 8,000 kittens in Los Angeles since 2017, Fried said.

Here’s Irby and a load of foster kittens: 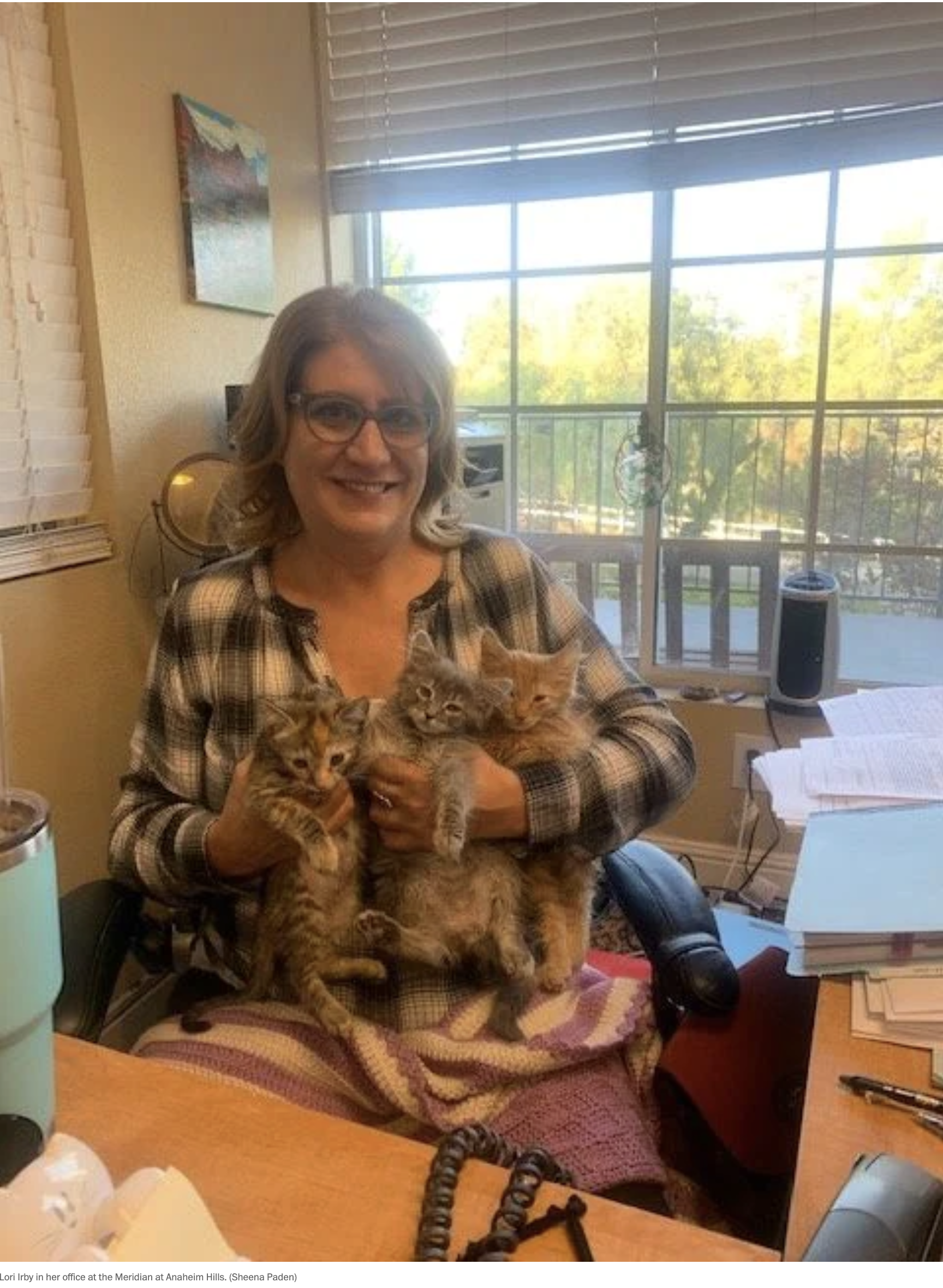 4 thoughts on “Caturday felid trifecta: Rescuing a baby Pallas’s cat; man builds elevator to help senior cat up and down stairs; kitten therapy at a retirement home; and lagniappe”