I’ve written about a dozen posts calling out Scientific American for its fulminating wokeness (give me another word if you don’t like that one), in particular its use of op-eds to discuss and promote woke ideological views that have little or nothing to do with science.  A lot of readers here have canceled their subscriptions, but that hasn’t stopped Editor-in-Chief Laura Helmuth from subverting what was once the premier popular science magazine in America, turning it into a “progressive” political mouthpiece whose “real science” articles get lamer and lamer.

Michael Shermer has personal experience of this, as he wrote over 200 columns for the magazine, eventually parting ways because the editors didn’t like the messages of some of his columns. He recounts this, and makes two other points, in his longish column at his new Substack site, “Skeptic“. The title below tells the tale (click below to read for free, but subscribe if you read often).

1.) The magazine has published a lot of woke and relatively nonscientific op-eds over the past few years. We know this becaise I’ve singled out almost all of the ones that Michael mentions (and more), but let’s reiterate a few (with links to the original columns and my critiques):

“Modern Mathematics Confronts its White Patriarchal Past,”   My critique is here.

“Denial of Evolution Is a Form of White Supremacy.”  This is a particularly ludicrous column implying that the motivation for creationism is white supremacy. Any fool knows that it’s almost always religion. My critiques are here and here. I do not understand how the editor allowed such an egregious misrepresentation to be published.

“Why the Term ‘JEDI’ is Problematic for Describing Programs that Promote Justice, Equity, Diversity and Inclusion.” This was a real doozy, unhinged in its claims. My critique is here.

There are others, but these are the three that Shermer singles out. He discusses each at some length, so go see what he says.

2.) Despite the magazine’s claims, inequities in areas or professions are not prima facie evidence for bigotry, racism, or bias. Riffing on the first article above, which uses the paucity of female and black mathematicians as evidence for misogyny and racism, Shermer makes the obvious point that while there is racism in every aspect of human endeavor, academics is about the least racist area of all. That’s shown by the frenetic efforts of nearly every department and college to hire women and minorities. Shermer’s point, which the woke hate (and thus ignore) is an obvious one: that disparities between sexes or races in representaiton could have other causes, such as differential preferences—or a “pipeline” issue that reflects lack of opportunity due to past discrimination but not present day bigotry. Why can’t progressives grasp this point and parse out the various causes of inequities before crying “sexism and racism”? Because they have a preconceived bias that they don’t want addressed with data. It’s an example of what J. B. S. Haldane called “Aunt Jobiska’s Theorem”: “What I say three times must be true.” (This is from Lewis Carroll.)

Shermer supports his arguments—and the woke will really hate this—by showing that there’s a huge disparity between men and women in the number of doctoral degrees awarded—in favor of women. Overall in U.S universities, the percentage of doctorates going to women in 2019 was 52.9% as opposed to 47.1% for men.

Further, the disparity depends on the field. The chart Shermer gives below showing doctorates divided by sex and field of study won’t surprise you: 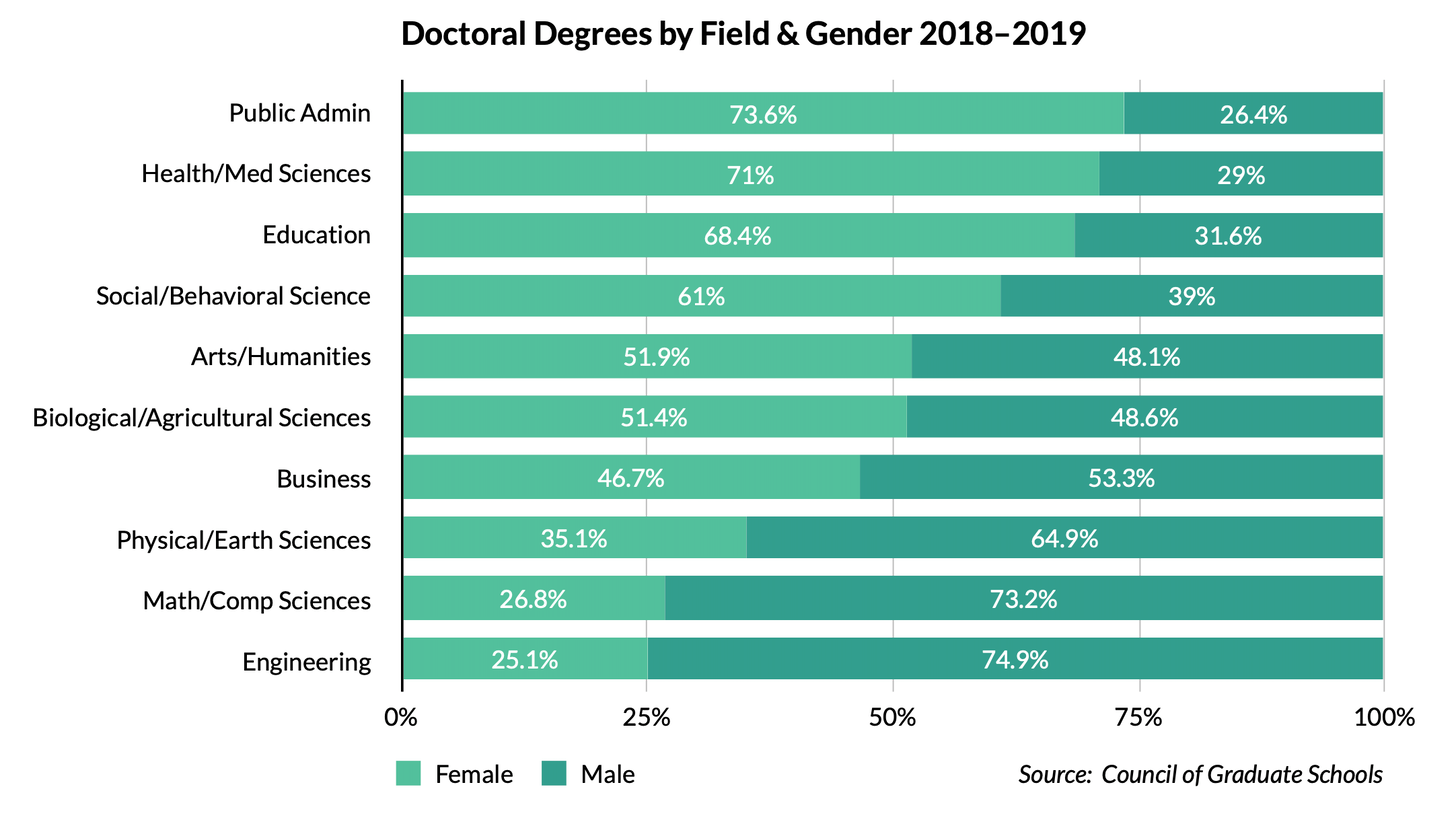 When the data is [sic] presented in a bar graph rank ordered from highest to lowest percentages for females earning doctorates (below), the claim that the fields in which women earn lower percentages than men can only be explained by misogyny and bias is gainsaid by the top bars where the valance is reversed, unless we are to believe that only in those bottom fields are faculty and administrators still bigoted against women whereas those in the top fields are enlightened.

3.) Shermer was eventually booted from the magazine, ending his column, because he adduced facts and explanations that the woke editors didn’t like. Shermer’s conflicts with the editors grew gradually, starting when he pointed out that people can get false impressions of the prevalence of a phenomenon if they pay attention only to coincidences and not exceptions. He uses as an example the “horror movie curse”, in which stars of horror movies are said to suffer later mishaps more often that stars of other movies. He notes that “those seeing supernatural intervention” in this “are remembering only the horror movies that seemed cursed (‘hits’) and forgetting the other three possibilities (‘misses’, ‘false alarms’, and ‘correct rejections’ in Signal Detection Theory parlance.”

That’s true (Steve Pinker has made this point about the chance of being killed in a terrorist attack is smaller than we think because the news tends to play up the bloody stuff an ignore people falling in bathtubs and the like). But the editors got upset when Shermer made a similar point about child abuse with a similar four-celled dissection (below). As he said in the column, in a bit that wasn’t published:

I then added a more serious example of the Fallacy of Excluded Exceptions, provided to me by the renowned social psychologist Carol Tavris, citing her skepticism about the theory that sexually abusive parents were themselves sexually abused as children. This was a common explanation until researchers pointed out that most sexually abused children do not grow up to abuse their own children, and that most abusive parents were not abused as children (see the 2×2 matrix below from my PPT lecture).

Not that got the editor’s hackles up, because even though there is a possible confirmation bias here, it involves sexual abuse and we must ignore other explanations. As the editor said:

I’m afraid I’m going to have to ask for a revision on your November Skeptic column. The overall idea is sound—another example I often think of is “I was just thinking about you—and then you called! It’s ESP!” But we’re unwilling to publish a piece that suggests—even in a quote attributed to someone else [Carol Tavris]—that sexual harassment and the phenomenon of abused children growing up to be abusers are less of a problem than most people imagine. Heuristics are all very well, but unlike with spooky deaths related to horror movies, these involve real harm to real people.

But it could be less of a problem than most people imagine, just like the “horror movie curse” example.

I’ll find other examples and send you another draft, but the point is NOT that sexual harassment or abuse is not as large a problem as we think (or that its effects are not as harmful as we thought); the point is that in our attempt to understand why, say, the sexual abuse of children happens, the hypothesis that their abusers were themselves abused as children is gainsaid by the cell in which all those kids who were abused as children grow up to not only not be abusers, but to be loving parents who wouldn’t dream of harming their children; and the other cell in which abusive adults were not abused as children.

I understand why we need to be sensitive to victims of abuse, but from a purely scientific hypothesis-testing perspective, it doesn’t serve society to refuse to consider the other cells in the matrix that contain disconfirming evidence of the hypothesis just because someone is committed to the hypothesis that abused children grow up to be abusers, and abusive adults were abused as children. The evidence shows otherwise. It should be okay to point that out.

There’s nothing wrong with that, and in fact sussing out why people sexually abuse children is far more important than studying the “horror movie curse”. Analysis of the former must take into account biases, and the editor didn’t like that—simply because the topic was sexual abuse.

Matters came to a head (I don’t like that phrase as it’s about boils and pimples) when Shermer submitted a column about tribalism, which he reprints in its entirety. and made what today is considered a serious mistake: citing Martin Luther King’s dictum that people should by judged by their character rather than their pigmentation. (This is now verboten, as it contravenes the dominant narrative that we must see color.) Shermer was given one “farewell” column and then handed his walking papers.

The interchange between Michael and his editors gives us some insight into the termites chewing into the edifice of Scientific American. My prediction is that unless the editors go back to its original format and lay off the propagandizing, the magazine will fold. After all, you can read about social justice and wokeness nearly everywhere, including Teen Vogue, but Scientific American was once unique.