I subscribe to Tish Harrison Warren’s NYT column for the same reason I sniff the milk when I already know it’s gone bad. Masochism, I suppose.

Today we have a very confused column from the Anglican priest, whose schtick seems to be to take a conventional and approved moral position, inform us how virtuous she is on the issue, and then inform us all how her Anglican faith has buttressed her virtue. I’m not sure what the Times sees in this approach unless it wants to either valorize faith in general or convert people to Anglicanism.

Click on the screenshot to read, or make a judicious inquiry: 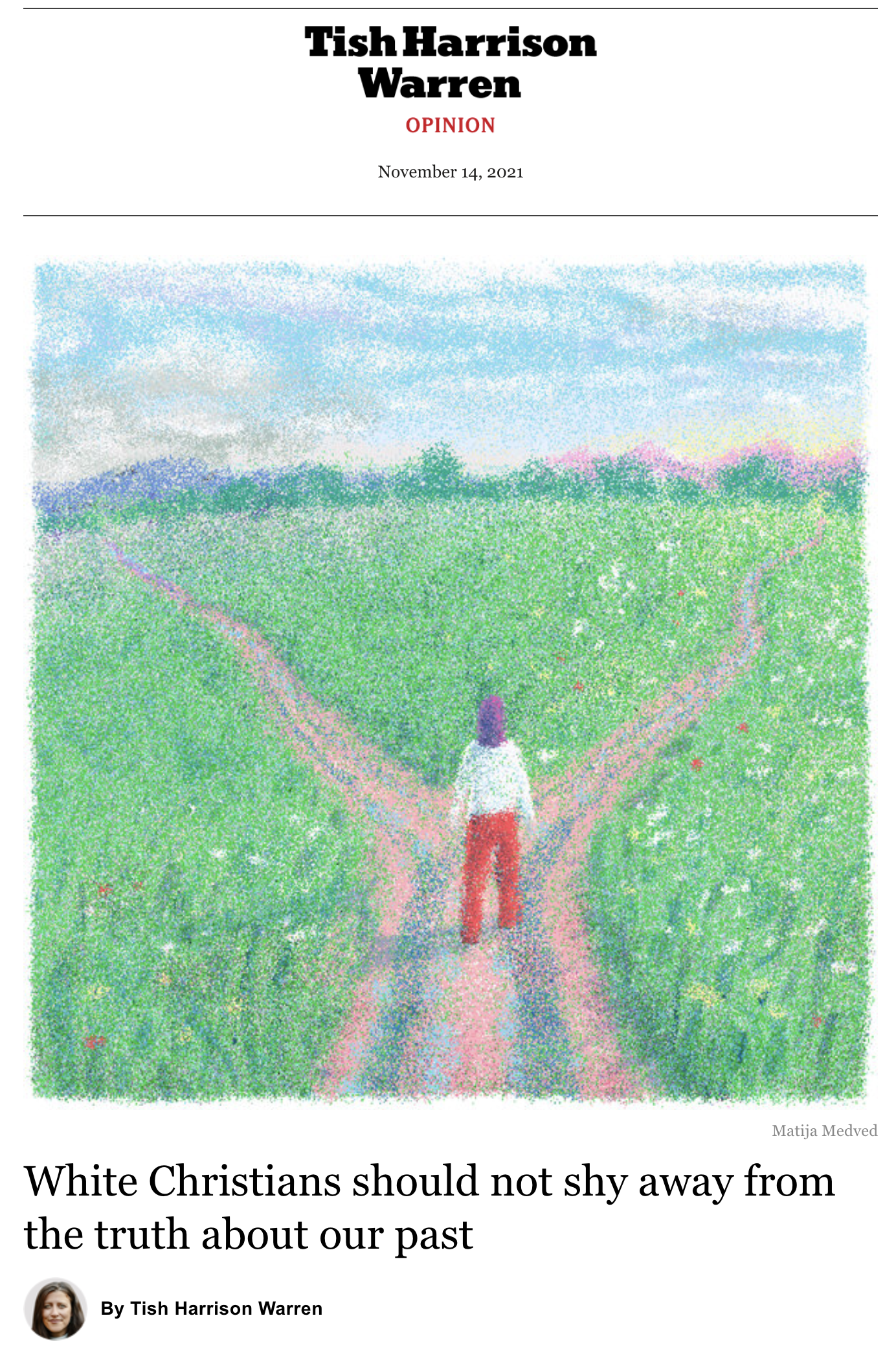 Today the issue is racism, which she properly decries, but of course opposing racism is nothing new. The “added value” here is her explanation of how her Christianity helps with her anti-racism.

The first part of the column is her declaration that America is founded on slavery and white supremacy, and that attacks on Critical Race Theory are made by white supremacists to allow white Americans to avoid confronting the sordid past of their race. The last bit is partly true, but the first—that criticizing CRT is a manifestation of racism—is not.

I don’t remember the first time I was taught that the Civil War was not fought because of slavery. I am a white Texan, so this idea was simply in the ether, as were myths about “good slave owners” and the “Lost Cause.” I knew that America had a racist history, but when I was a child, the details of what that meant were blurry and vague.

This experience is common. There is objective truth to our nation’s history, based in research and primary sources. But as Clint Smith describes in his book “How the Word Is Passed,” in America we too often tell a slanted version of our history to protect the feelings of white people. Smith highlights how an intentional disinformation campaign, which began shortly after the end of the Civil War, has altered the way much of America narrates our racial past. He looks at the convenient lies that white people often rely on to belittle the horrors of the past, the way we exclude stories that might trouble or challenge us.

I’m wondering if she’s adhering to the claims of the 1619 Project here, as she comes awfully close.  Nothing she says differs from what Nikole Hannah-Jones or Robin diAngelo says.

She then tells us about the aspects of Christianity that help her realize how soaked America is in racism and white supremacy. But before she does that, she says this:

The question before us as a nation is simple: Are we willing to tell the truth about our history or not?

My convictions about this question are deeply shaped by my Christian faith. White Christians do not appear to be any better than the culture at large at truthfully telling the story of America. But the Christian doctrines of sin and grace require truthfulness, even if those truths make certain people feel guilt, shame or discomfort.

First, White Christians are WORSE than others about “telling the true story of America” (i.e. recognizing racism). Look at this article from NBC News (click on screenshot).

And who could answer “no” to the first question? The problem is that “truth” differs among people. To Nikole Hannah-Jones, the Revolutionary War was fought so America could keep its slaves. Not true. Also to Hannah-Jones, America was founded on slavery, which is the dominant strain in our history. That’s debatable, even among historians. Don’t forget that she also said that America dropped nukes on Japan in WWII even though we knew Japan was going to surrender because, well, we’d made the bomb and wanted to use it. That’s also untrue. So is Nikole-Smith, the truth-teller about America, adhering to her goals?

But I digress. She’s not the only one, as there are debates, even among liberals, about the degree of structural racism in America  and how it influence our history. So yes, we should tell the truth (and, to be fair, many white folks don’t want it told), but a lot of what passes for “history” is debatable, especially around race, for it consists not of empirically verifiable facts but in interpretations of facts.

But then she admits that White Christians aren’t any better than anybody else (and, in my view, probably worse than atheists) in apprehending historical truths. So what good is Christianity if it doesn’t help anybody else but Reverend Warren? She is being personal rather than general, which limits the value of her argument.

Here are the aspects of Christianity that, according to Warren, are supposed to foster anti-racism:

Christian doctrine also understands sin and evil not only as individualistic, voluntary decisions to do evil but also as a communal, atmospheric reality. We are born into communities with sinful assumptions and narratives about the world that drive oppressive and destructive behavior. However unintentionally, we give our assent to these ways of understanding and acting in the world.

I’m sorry, but racism didn’t pose much of a problem for Christianity until  the twentieth century. In fact, many Christians used their faith to support slavery and promote racist attitudes. As for whole communities being racist, well, we have purely secular explanations for that—explanations better than the fact that we’re born sinful.

The gospel presented in scripture demands that we “walk in the light,” that we not try to hide or minimize the truth of what’s wrong with us or our history.

Fine. Then why aren’t Christians “better than anybody else” on the issue of racism? As for distorting history, well, let’s just say that the Christian myths that Warren embraces and preaches to her flock are dubious at best. Jesus as a miracle-working son of God/part of God? The Resurrection? If Christians are going to get straight with history, then they’ll have to discard a lot of their faith.

Christian doctrine also understands sin and evil not only as individualistic, voluntary decisions to do evil but also as a communal, atmospheric reality. We are born into communities with sinful assumptions and narratives about the world that drive oppressive and destructive behavior. However unintentionally, we give our assent to these ways of understanding and acting in the world

John McWhorter would have a few words on this paragraph as showing the similarities between Woke anti-racism and religion. The repentance in the former case involves abject apologies by the Sinful.

The Bible also lends us the tremendously helpful concept of idolatry to help understand racial evil. John Calvin wrote that the human mind is “a perpetual forge of idols.” Our loves are disordered. Our idols, which are often unknown to us, are not usually bad things in themselves, but instead are things that we have loved and exalted too much. There is, of course, nothing wrong with being white. God designed the specific amount of melanin in my skin. But America has — and has always had — an idolatry of white culture and power. Our history makes that clear.

Here she stretches to draw an analogy between political and racial attitudes on the one hand, and false gods on the other. Whether you find that comparison valid is up to you, but it doesn’t move me.

But the main thing that Warren overlooks—probably deliberately—is that the Bible itself has been used to justify slavery, and, as far as I know, says nothing about racism and nothing negative about slavery.  From the preceding link:

“Christianity was proslavery,” said Yolanda Pierce, the dean of the divinity school at Howard University. “So much of early American Christian identity is predicated on a proslavery theology. From the naming of the slave ships, to who sponsored some of these journeys including some churches, to the fact that so much of early American religious rhetoric is deeply intertwined . . . with slaveholding: It is proslavery.” Some Christian institutions, notably Georgetown University in the District, are engaged in a reckoning about what it means that their past was rooted in slaveholding. But others have not confronted the topic. “In a certain sense, we’ve never completely come to terms with that in this nation,” Pierce said.

Why did Christianity become anti-slavery? Because of secular humanistic morality, which realized that slavery was immoral. The religious, as they so often do (viz., gay marriage) change their morality only after society itself has started changing because of secular morality.

We all know that time and again, the Bible condones or even approves of slavery. (n.b.. Slaves back then were not mostly blacks, but simply conquered people of all hues. But the same principle applies: the Bible doesn’t criticize one population from enslaving others.) The Wikipedia article “The Bible and Slavery” is a good start. God, it seems, didn’t adhere to Christian principles!

In the end, every Christian anti-racist virtue that Warren says dispels racism was ignored until secular society started becoming abolitionist. And if you adhere stricly to the Bible, you would not criticize slavery or racism. Rather, you’d support them!

What we see in Warren’s essay is a great big con job. Like most of us, she deplores racism, and that attitude is great. But since Warren converted to Anglicanism from being a Southern Baptist. she’s found a way to twist her new faith to show that it’s really anti-racist. It’s not, and hasn’t been until it took the lead from humanism.

If Warren wants Christians to tell the truth about history, they should begin with the things they believe about the history of their own faith, and examine what the Bible says about slavery. Then they can start making up stuff.