I’ve written a fair amount on this site about panpsychism,, the view that everything in the Universe, including electrons, rocks, and organisms, have a form of consciousness. The “conscious” molecules and atoms are supposed to combine, under certain unspecified and mysterious rules, into brains that have a higher-level consciousness.  Voilà: the “hard problem” of consciousness explained!  Philip Goff, one of the three discussants in the video below, is the primary exponent of this theory.

Panpsychism is, I think, pure bunk, and you can read my earlier posts to see why. One of those posts highlights a paper by Sean M. Carroll that, in my view, demolishes the idea of panpsychism because it grossly violates the laws of physics—of the “complete” description of the world that “the core theory of physics” presents. In the very long video below (3 hours 14 minutes!), there’s a mano a mano verbal exchange in which Sean, in his usual polite but firm way, tells Goff that he’s simply wrong about panpsychism and that Goff is too stubborn to admit it.

This is a lot more fun than reading the paper, especially watching Goff as he sees his whole theory crumble under the relentless onslaught of Carroll’s physics. Sean’s views are similar to those given in his paper, but I like seeing the exchange between a physicist and a panpsychist (Goff is the person most closely associated with this crazy theory.)

Also in the discussion is Keith Frankish, a British philosopher of mind. Wikipedia notes of him: “[Frankish] holds that the conscious mind is a virtual system, a trick of the biological mind. In other words, phenomenality is an introspective illusion. This position is in opposition to dualist theories, reductive realist theories, and panpsychism.”

Now, you don’t have to watch the entire 3-hour video to see the exchange about the value of panpsychism as an explanation of consciousness. If you click on the screenshot below, you’ll go to the YouTube video starting 6 minutes in, when Sean gives his view of consciousness as an epiphenomenon of evolution rather that will eventually be explained. (This is also my view, though I’m neither philosopher nor physicist.)

There’s then a philosophical digression, and the discussion of consciousness begins again at 7:50.  This discussion and its putative explanation by panpsychism ramps up gradually with detours into lucubrations about emergence and related matters.

In my view, the discussion starts reaching its apogee starting at about 1 hour and 25 minutes in, when Goff says that the “core theory’s” success doesn’t lay a hand on panpsychism, which requires a different or supplemental theory of physics. (You may want to start the video here.) Carroll disagrees strongly and is “blunt” about telling Goff he’s just dead wrong. Goff tries to impute his views to a colleague rather than himself, but that’s not correct. He’s using another panpsychist like a ventriloquist uses a puppet.

At 1 hour 30 minutes in, things get a bit heated, and it’s time to get out the popcorn. Goff even floats the idea that the laws of physics differ between electrons in the brain and electrons everywhere else! (This is part of his view that panpsychism cannot be accommodated by the core theory.) Frankish is on Carroll’s side, but doesn’t speak as much as the other two.

I watched only until an hour and 45 minutes in, so I can’t tell you what happens in the rest of the discussion. But if you watch up to that point, and listen to Sean’s eloquent and patient explanations, and see the sweating panpsychist professor try to prop up his crumbling ideas, you will not be any more enamored with panpsychism than you were before. In other words, you’ll see that it’s a theory without substance. 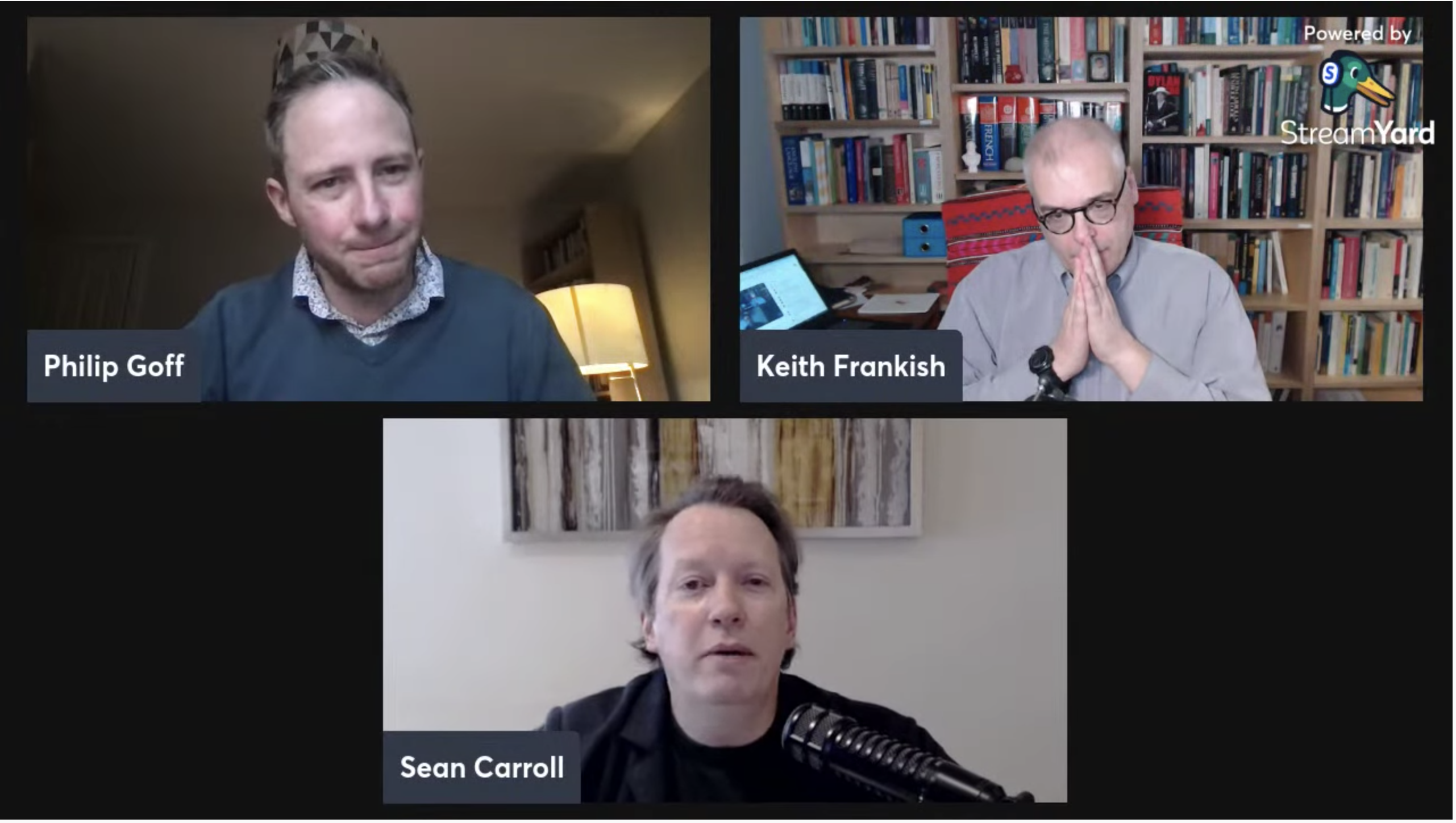