I’m heartened to see that other scientists and philosophers of mind I respect, like Sean Carroll and Patricia Churchland, have analyzed the idea of “panpsychism” and found it wanting. As I noted yesterday, adding some of my own criticisms, panpsychism is somewhat of a philosophical fad (or even a religion). It claims that we’ll never understand consciousness through a combination of neuroscience and philosophy, but instead must posit that every bit of matter in the universe has its own form of consciousness. And if you put enough of those conscious atoms and molecules together, you get “higher” consciousness: the feelings of subjectivity, pain, pleasure, and the perception of colors known as “qualia”.

The physicist Sean Carrol takes another angle in a new (and yet unpublished) paper that was cited by reader Vampyricon and is online. Click on the screenshot to read it. I’ve included the abstract and the place where it will be published (the book referenced, Galileo’s Error, is advocate Philip Goff’s big defense of panpsychism, but I wasn’t impressed). 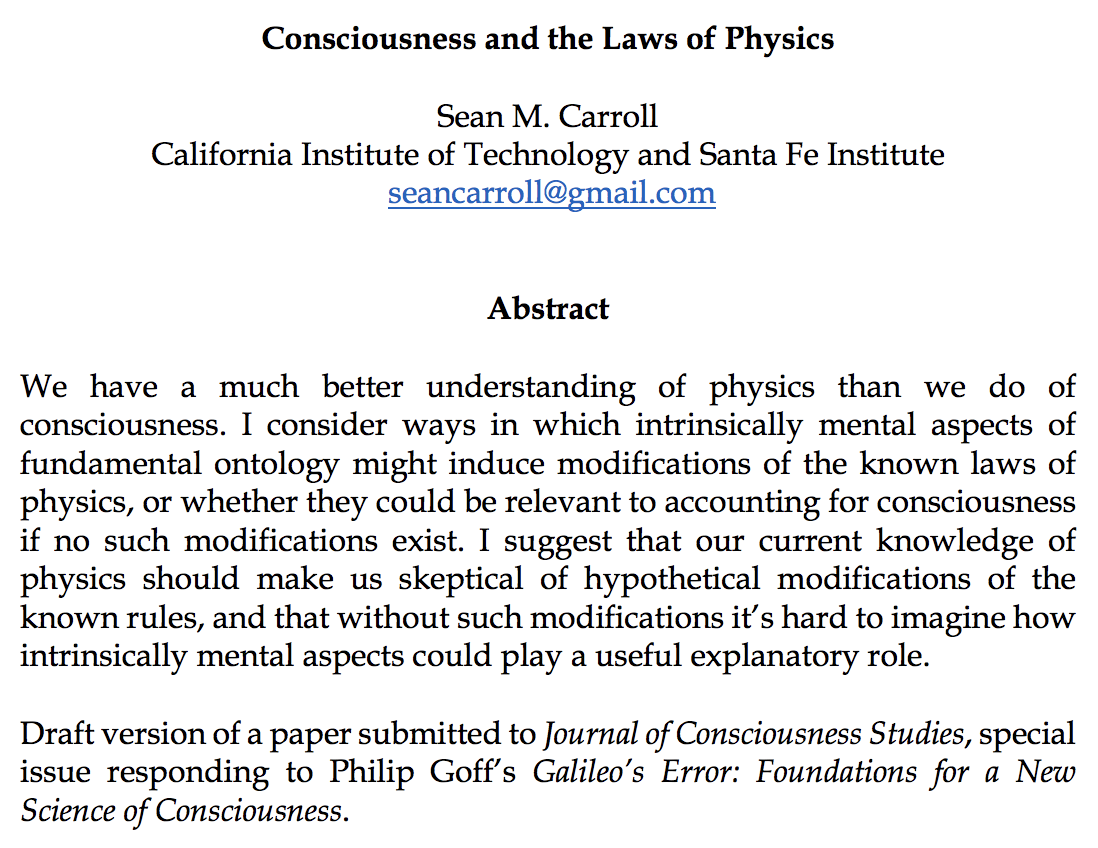 As he has in previous books and papers, Carroll demonstrates that our present theory of physics is perfectly adequate to explain the physics of everyday life—unless we go sticking our heads in a black hole or something. Further, adding “mental” properties to our known core theory of physics not only changes that core theory, but is unlikely to explain consciousness, which, though we don’t yet understand it, is in principle perfectly consistent with the laws of physics, with consciousness being an epiphenomenon of physical processes. Yes, we don’t understand it, but that doesn’t mean that we must go tinkering with the laws of physics to explain consciousness or positing untestable mental properties of inanimate matter.

Carroll’s is a long paper, and has some equations that I don’t understand, but his conclusions are clear, and demands that panpsychism clarify its propositions in explicit physical terms beyond merely saying “all matter has consciousness”.  Here’s his conclusions:

Any discussion of mental aspects of ontology must specify one of two alternatives: changing the known laws of physics, or positing that these aspects exert no causal influence over physical behavior. We cannot rule out the first option either through pure thought or by appeal to existing experimental data, but we can ask that any modification of the Core Theory be held to the same standards of rigor and specificity that physics itself is held to. The point of expressions like (1) and (3) is not that mentally-induced modifications of physical parameters are impossible, but that a promising theory of consciousness should be specific about how they are to be implemented.

The passive mentalism option, where mental aspects have no impact on physical behavior, seems even less promising. “Behavior” should not be underrated; the behavior of physical matter is literally “what happens in the universe.” Crying at a funeral is behavior, as is asking someone to marry you, as is arguing about consciousness. No compelling account of consciousness can attribute a central explanatory role to metaphysical ingredients that have no influence on these kinds of behaviors.

We don’t know everything there is to know about the laws of physics, and there is always the possibility of a surprise. But the solidity of our confidence in the Core Theory within its domain of applicability stands in stark contrast with our fuzzy grasp of the nature of consciousness. The most promising route to understanding consciousness is likely to involve further neuroscientific insights and a more refined philosophical understanding of weak emergence, rather than rethinking the fundamental nature of reality.

I have a feeling that in one or two decades panpsychism (which has been around in one form or another for centuries) will no longer be regarded as a fruitful way to understand consciousness.

74 thoughts on “Sean M. Carroll shows that panpsychism is unlikely and unnecessary”