I was suckered by the Courtier’s Reply of panpsychists like Philip Goff, and so have finished his popular (i.e., trade) book, Galileo’s Error: Foundations for a New Science of Consciousness. I am not going to summarize it or review it at length, as it says little beyond what I’ve summarized previously. It has not convinced me that there’s anything to panpsychism: in fact, it’s turned me away from it, since it seems bundled up with all kinds of mysticism as well as additional bizarre and untestable views.

What is new in the book is Goff’s proposed “solutions” to the “combination problem”: How do atoms and particles with rudimentary consciousness, when they get together in a human brain, suddenly produce “higher”, self-reflective consciousness able to have subjective experience (“qualia”)? This is the “hard problem” of panpsychism, but there is no good solution. (Of course, it’s insane to accept at the outset that atoms and electrons are conscious, anyway.)

Goff offers two solutions, but neither makes sense. The first invokes experiments with “split brain” patients, which, he says, have “two consciousnesses” when you divide the corpus callosum. (I think neuroscientists would take issue with the “two separate consciousness” bits, for the patients, while having some aspects of their consciousness divided, don’t perceive of themselves as two distinct people.)  But Goff goes on to extrapolate downwards: if you divide the brain in two and get two consciousnesses, then eventually, if you keep dividing, you will get down to atoms or molecules that are also conscious. I kid you not. I repeat: the logic is that if you get two consciousnesses by dividing a brain in two, you’ll get trillions of consciousnesses if you keep on dividing. A quote (it’s a screenshot from Google books and there was yellow in my capture because I searched for a phrase: 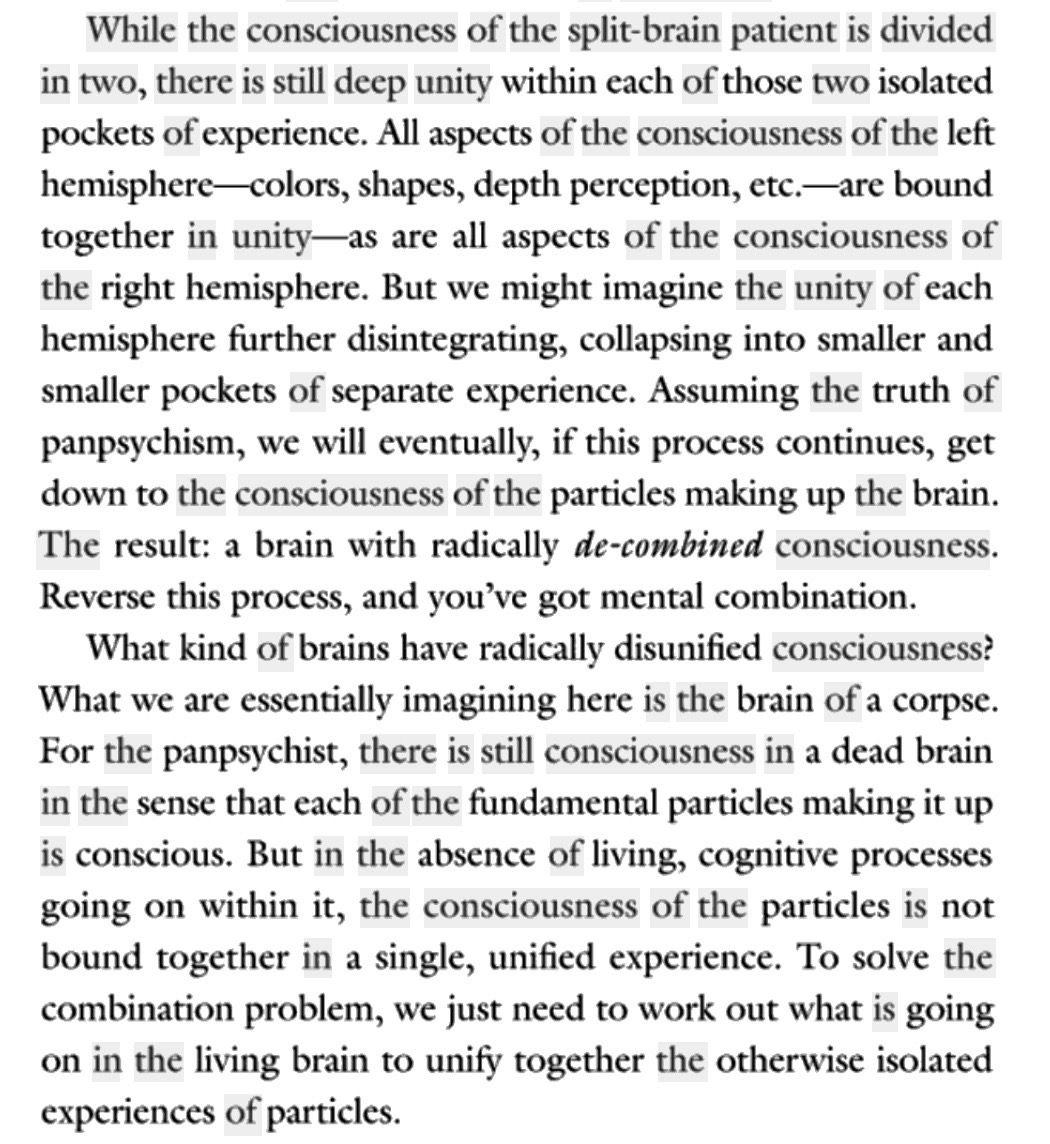 Yeah, there are all those pesky dead people that have conscious atoms in their brains but inconveniently lack consciousness themselves! So there’s yet another problem to be solved.

And, of course, this doesn’t solve the problem at all, it’s just a “top down” way of saying that the consciousness of the brain’s material constituents manifests itself in a “higher” consciousness of the brain. “Reverse this process, and you’ve got mental combination” is simply a misleading way of restating the combination problem, not solving it.

Goff’s second solution involves something called the “Integrated Information Theory of Consciousness (IIT), proposed by his colleague Hedda Mørch at the University of Oslo. But that boils down to saying that when a system of atoms and molecules is sufficiently integrated (as in our brain), you get “higher” consciousness as an emergent property. I won’t go into the details of IIT, but there is no “there” there: what we have is just an assertion that at a certain level of “maximum integration”, consciousness appears. This is not a theory but merely a claim based on armchair speculation of the empirically uninformed sort. Here’s a bit of Goff’s discussion: 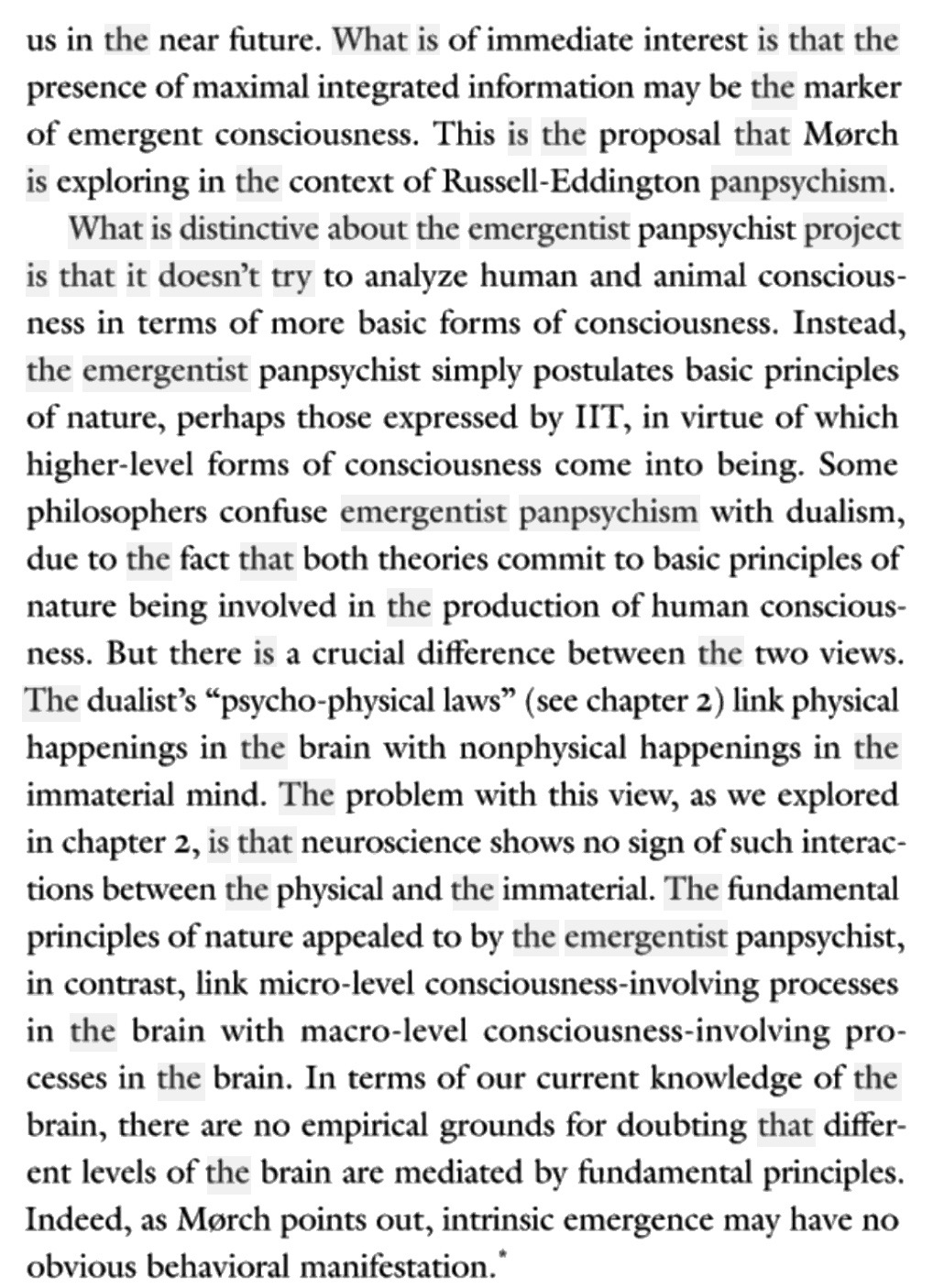 This isn’t a solution to the combination problem, but a form of magic that simply puts the problem into fancy words, invoking “basic principles of nature” (i.e., magic).

There’s a lot more I could say and criticize, but I have neither the time nor the will. Just let me mention one more issue: free will. Despite the assertion of some readers here that nobody really believes in “you can do otherwise” libertarian free will, Goff in fact does. He thinks that not only humans can decide at any given moment to behave in several different ways, so can particles! He posits a brain having particles that are not only conscious, but have free will of a sort, so they can “decide” what to do based on their “inclinations.” These inclinations appear free from the laws of physics: 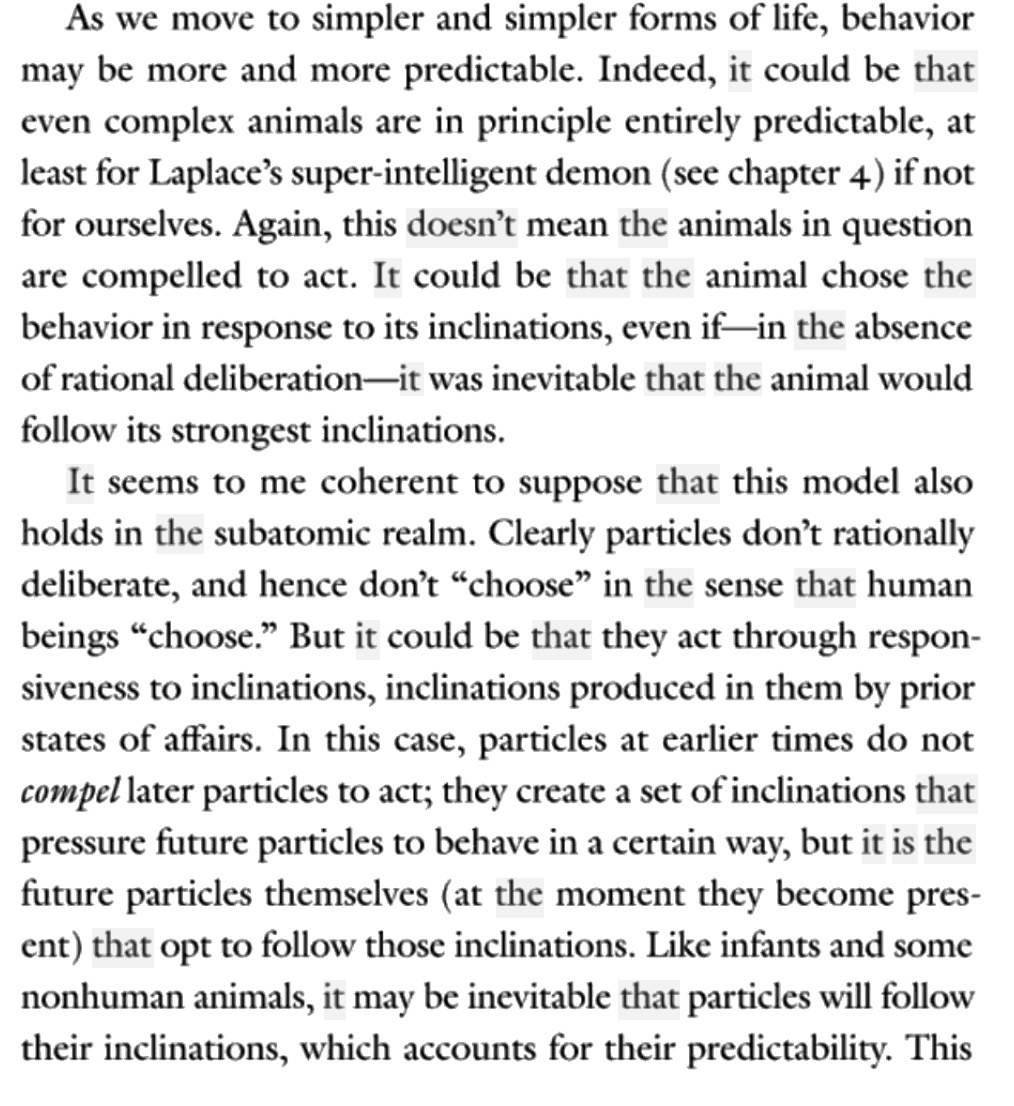 This then is a form of pan-free-willism.  Particles aren’t compelled to act by the laws of physics, but via their own rudimentary consciousness.

But is there anything in the laws of physics that claims particles act on their own volition? Could you argue that when a radioactive atom decays—and that is unpredictable in principle—that the particle is decaying under its own volition? But of course it’s unwise to rest libertarian free will at a higher level on quantum mechanics, because we have no evidence that our decisions rest on indeterminate quantum events, and no libertarian wants to argue that their choosing fish rather than steak was based on a quantum event at the molecular level.

At the end, the book degenerates into mysticism and the idea that the world may not be real but all a figment of our occupying a Matrix, but I’ll leave you to fry your brains on that bit.

To me, panpsychism remains a religion, which, though not accepting a deity, accepts a number of fiats for which there is no evidence, and yet is promulgated by fervent believers like Goff. (“Good afternoon. Do you have some time to talk about the consciousness of electrons?”)

Shall we call it a pseudophilosophy?

59 thoughts on “Panpsychism: a big bag of nothing”