Welcome to Tuesday, November 2, 2021: National Deviled Egg Day. I can’t resist putting up this meme about the recipe: 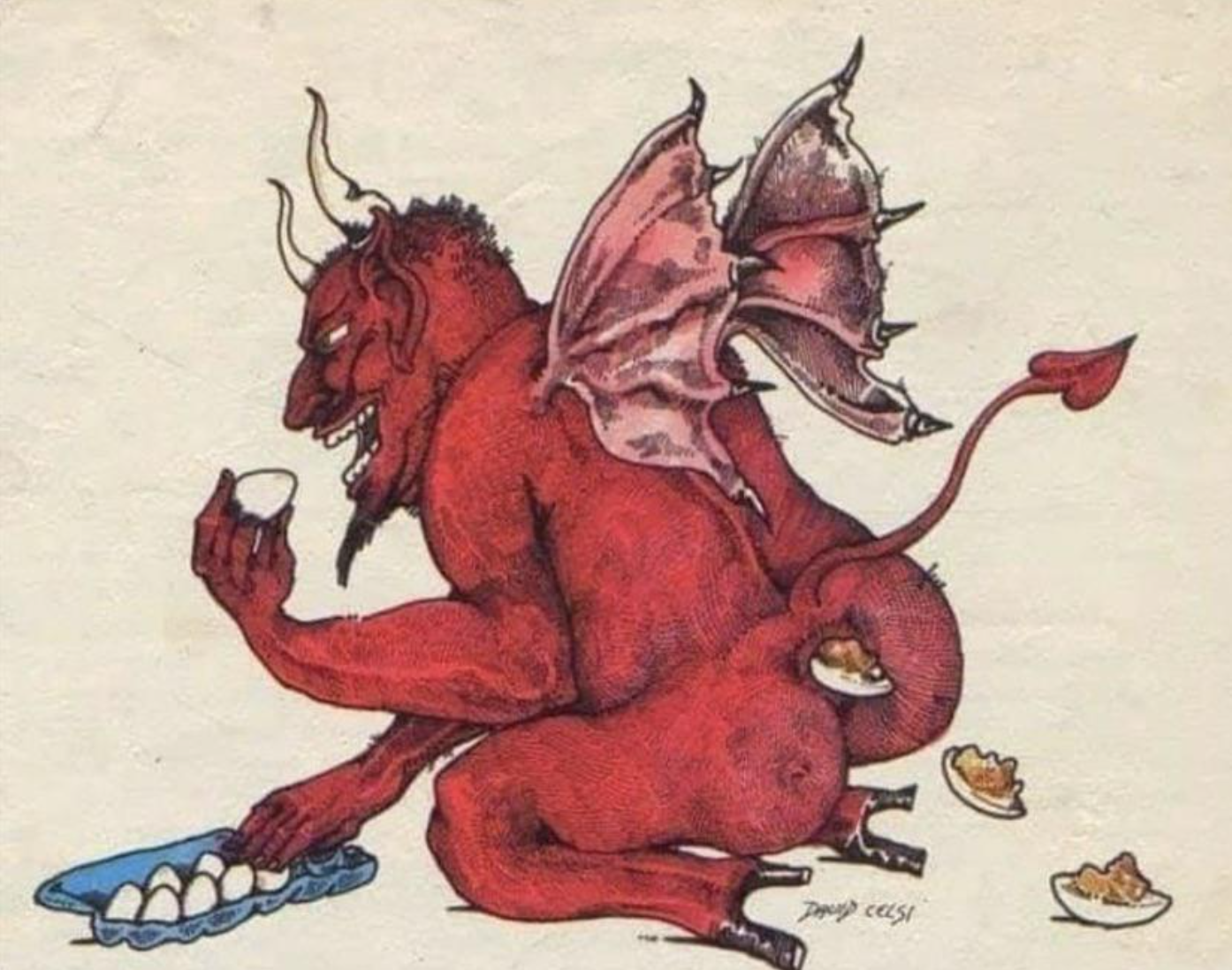 Google has an animated gif honoring the Day of the Dead (click on gif below), C|Net has an explanation of the drawing:

*Joe Manchin still won’t sign onto the Big Biden Spending Bill, even though it’s been cut from $3.5 trillion to $1.75 trillion. Biden said last week that the new bill would be supported by every Democratic Senator, but he may have been premature:

“I’m open to supporting a final bill that helps move our country forward,” [Manchin] said at an afternoon press conference. “But I’m equally open to voting against a bill that hurts our country.”

As for Kyrsten Sinema, it’s crickets as usual.

*Although Texas’s draconian abortion law was designed to be immune to challenges in federal court, Supreme Court Justices, hearing the case yesterday, said that abortion providers might indeed be able to challenge the law’s constitutionality:

That would represent an important shift from a 5-to-4 ruling in September that allowed the law to go into effect. Justices Brett M. Kavanaugh and Amy Coney Barrett, who were in the majority in that ruling, asked questions suggesting that they thought the novel structure of the Texas law justified allowing the providers to challenge it.

Justice Kavanaugh said that permitting a challenge might amount to closing a loophole. Justice Barrett said the law was structured to prevent the providers from presenting a “full constitutional defense.”

A decision to allow a challenge would not conclude the case or address whether the law itself is constitutional. Instead, it would return the case to lower federal courts for further proceedings. Moreover, it was not clear whether the court would temporarily block the law while the case moved forward, if it allowed either the providers or the administration to sue.

*In a more serious (and pessimistic) piece in the NYT, two advocates of reproductive rights, Kathryn Kolbert and Julie F. Kay, have an op-ed scarily titled, “Roe is as good as gone. It’s time for a new strategy.” They’re assuming that the Supreme Court will sink Roe v. Wade, but I’m not quite so certain. Nevertheless, they argue this:

Five justices — Brett Kavanaugh, Amy Coney Barrett, Neil Gorsuch, Clarence Thomas and Samuel Alito —are expected to eviscerate abortion access with their decision in Dobbs. None of these extremely conservative justices are likely to join a last-minute reprieve as happened in Casey.

When Roe falls, 26 states are likely or certain to ban abortion. Just 14 states and the District of Columbia will reliably continue permitting abortion, safeguarding women’s liberty.

Their solution? The only one possible, start organizing now to fight against abortion bans on the state level. They have other imperatives too, but too many to list here, so read their piece.

*Here are the three articles in the upper-left-hand corner of last night’s New York Times, which for me, at least, is where I look for important news. I guess the paper is trying to attract the People Magazine crowd now: 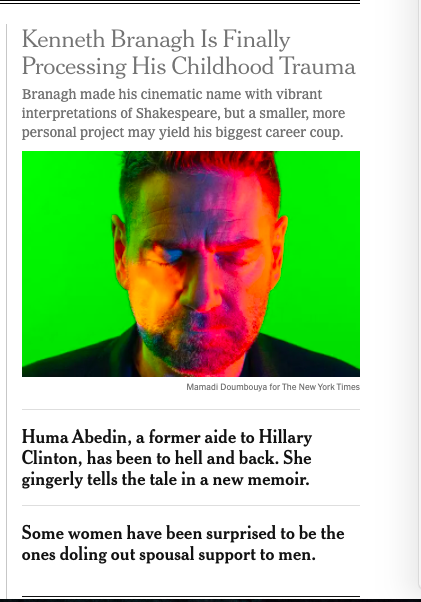 *This is humiliating for the Kiwis: a long-tailed BAT has won New Zealand’s Bird of the Year contest! Yes, the Pekapeka-tou-roa, a very endangered MAMMAL, has triumphed over the birds.

Of course it caused a big flap and ruffled feathers, as we see below:

NOOOOOOO!!!!! The pekapeka (long-tailed bat) won bird of the year! I genuinely yelled out loud like Luke finding out who his father was. This will not stand. This election was stolen. The winner can only be Kereru. #BirdoftheYear pic.twitter.com/CFWksBZ9aA

But Kiwis have a sense of humor. Read the article to see accusations that a previous year’s contest was rigged by Russian votes.

There's really nothing more New Zealand than:
a) having a heated bird of the year comp every year
b) putting a bat in the comp, which is not a bird but does fly so close enough I guess
c) everyone voting for the not bird

Looking forward to next year when Tuatara takes the win

Here’s a video of catching and marking this species:

*It took me 50 years or more to discover that the thigh is the best part of the chicken. It’s juicy (unlike the breast, which is dry), easy to eat by hand, and has the best ratio of skin to meat. I’m talking now about eating chicken parts on their own, not using them in dishes. If I were cooking a Chinese dish that requires chicken slices or cubes, I’d use the breast. Another good thing about the thighs is that they’re inexpensive. This is not news but I just thought I’d throw it in.

Stuff that happened on November 2 includes:

Here’s the letter from Foreign Secretary Balfour to Lord Rothschild (a leader in Britain’s Jewish community), which contains the “declaration (indented): 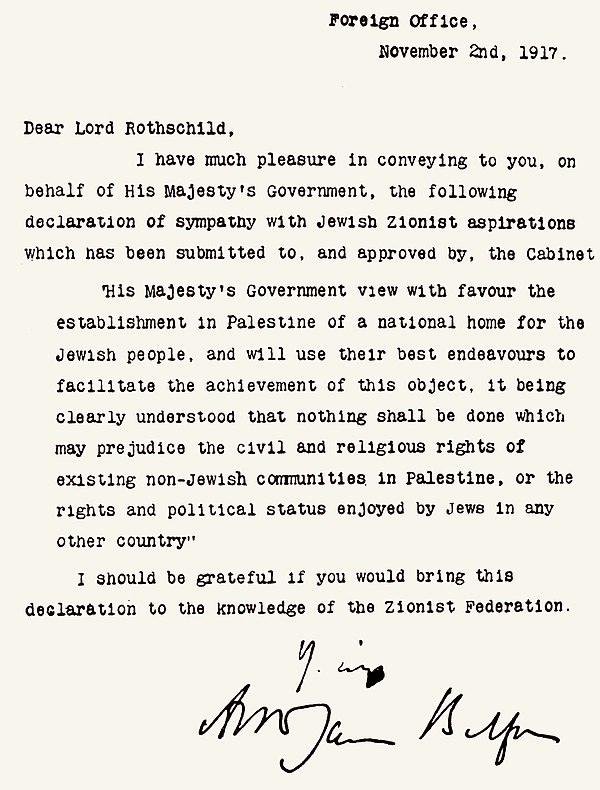 Here are the revolutionaries that declared the October Revolution preceding the meeting above. You’ll recognize one or two in the leftmost column:

Below is a video of that lame flight—”less than a minute, less than a mile.” The plane never flew again. The wingspan? 321 feet (98m), longer than a football field. Wikipedia adds that its own characterization is wrong, though (me emphasis):

. . . . it had the largest wingspan of any aircraft that had ever flown until the Scaled Composites Stratolaunch first flew on April 13, 2019. The aircraft remains in good condition. After having been displayed to the public in Long Beach, California, from 1980 to 1992, it is now on display at the Evergreen Aviation & Space Museum in McMinnville, Oregon, United States

Although Van Doren left the show and his post as an English instructor at Columbia University, he never was charged with a crime. He went on to a career in editing and writing.  Here’s a short newsreel piece featuring Van Doren’s appearance before Congress:

A first edition of this book, wrapped in a plain cover (the issuing cover as the book was “dirty”), will cost you $18,500 but you get a postcard signed by Lawrence as lagniappe. It was first published privately in 1928, and not pubished openly until Penguin went for it in 1960—the year of the trial. 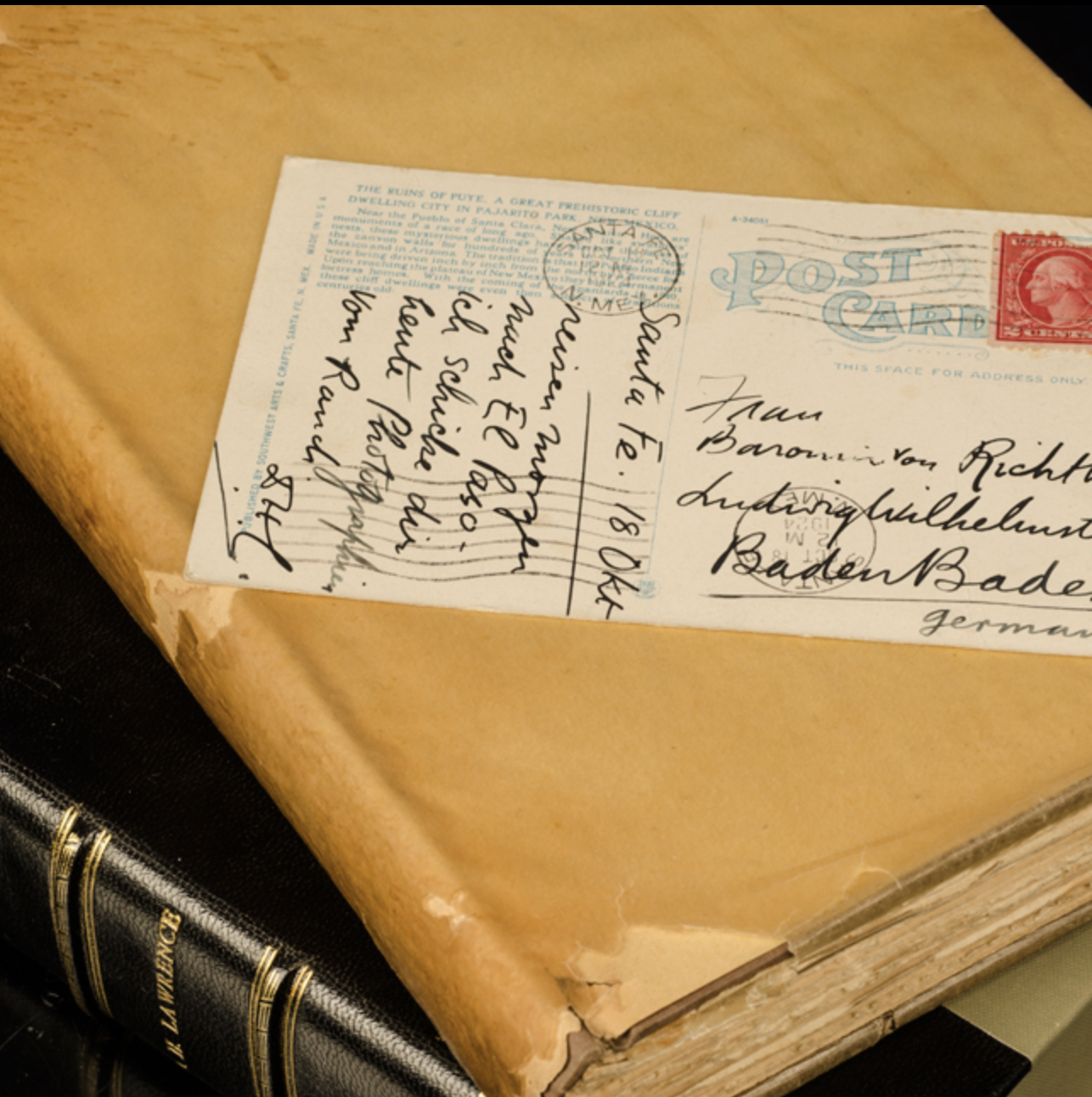 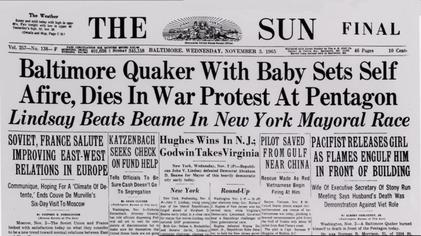 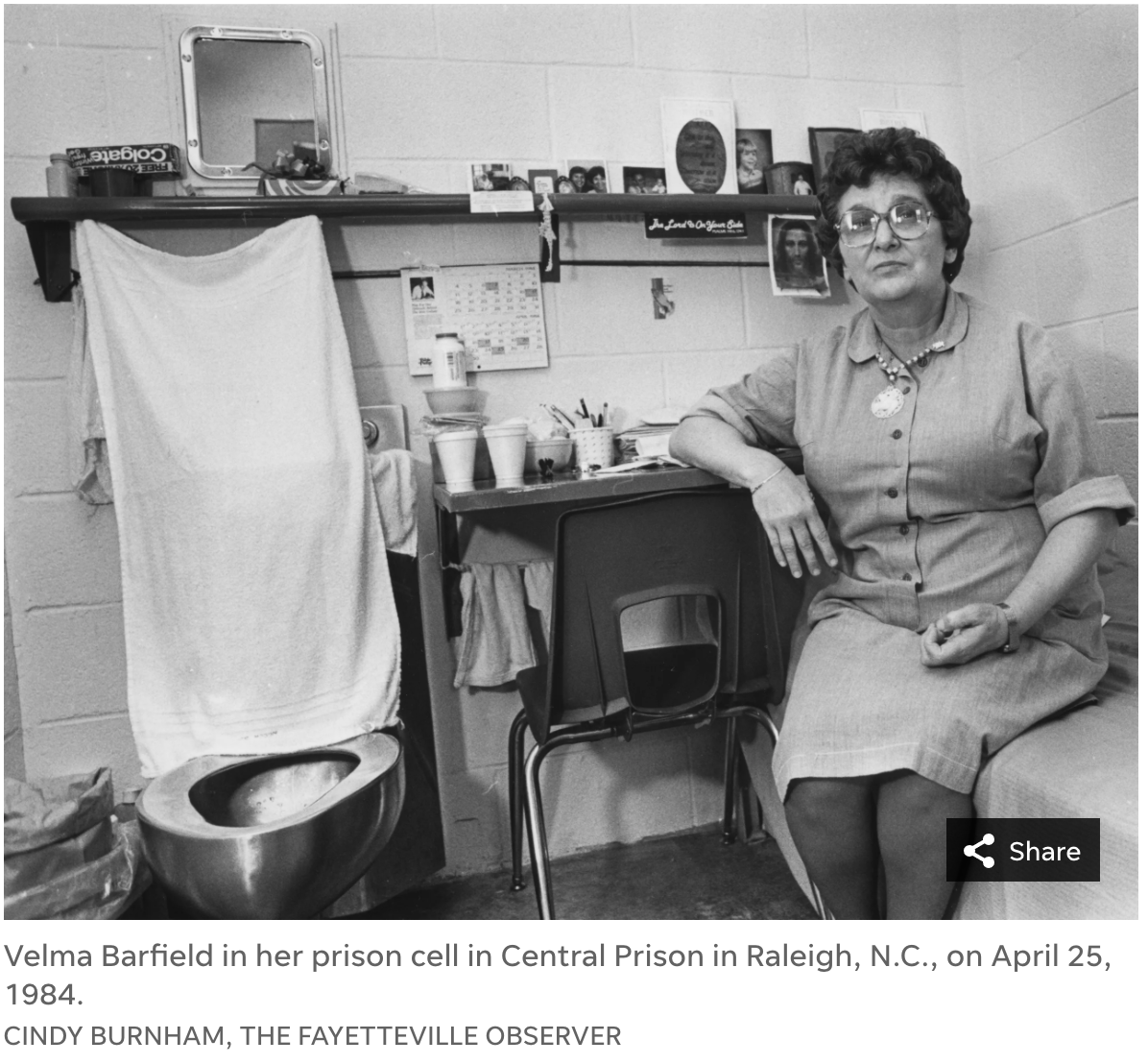 The Cubs won the 7th game with a 10th-inning rally, ending the “curse of the Billy Goat”. It was a great day in Chicago, I tell you.  Here’s a video of the win and a news report showing the team going wild:

This painting of Boone by Chester Harding, made in the year of Boone’s death, is the only known representation of the great frontiersman made during his lifetime. 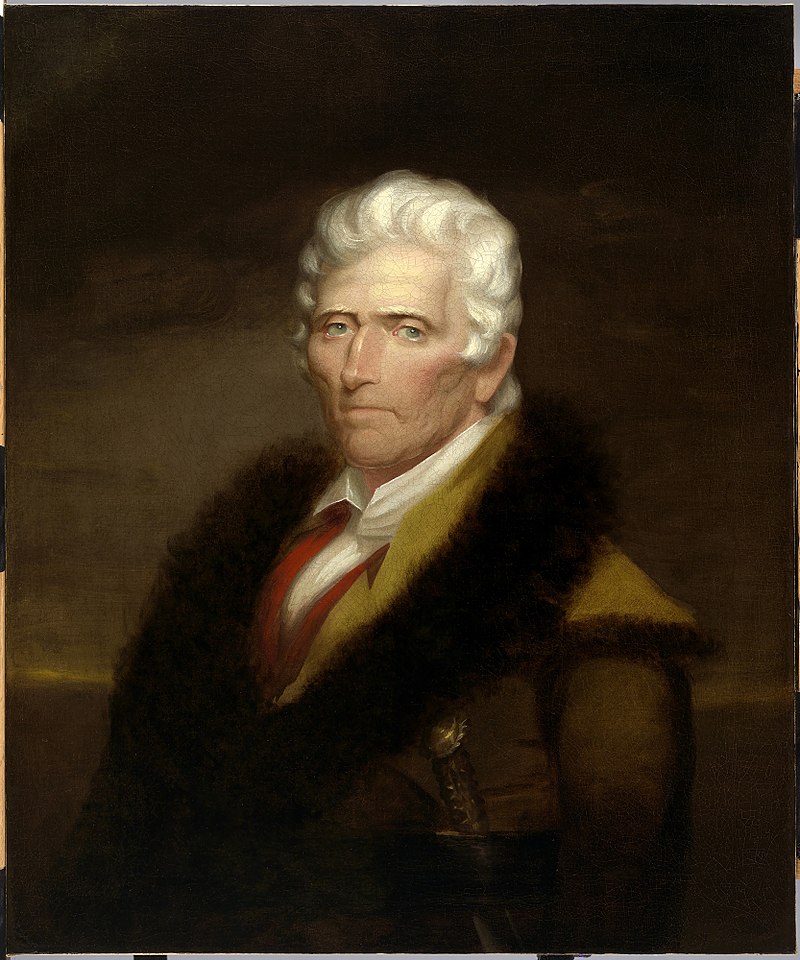 Berigan was a fantastic trumpet player, but died at 33 of alcoholism. Here’s his biggest hit with great solo work, “I can’t get started.” The voice is his, too. The clever lyrics, which reference a lot of things from that era, were by Ira Gershwin.

Vander Meer is the only player in the history of major league baseball to pitch two consecutive no-hitters (for Cincinnati). My dad, who was 19 at the time and always a big baseball fan, told me he saw the headlines after the second no-hitter and thought that it was an old newspaper. Here’s a very short clip showing Vander Meer on the mound:

Those whose vital functions ceased on  November 2 include:

Porter was a great nature photographer. Here’s one of his photos of aspens in New Mexico (1953): 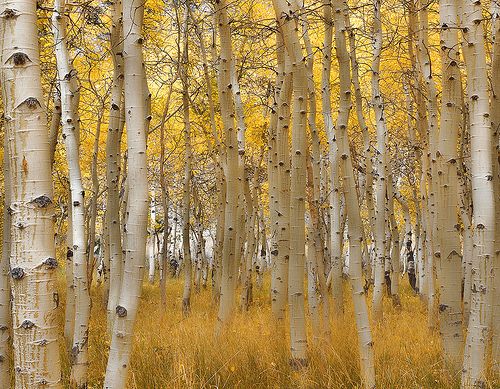 van Gogh was murdered on November 2, 2004 by an Islamist Dutch-Moroccan, who was captured and received life in prison without parole. He was shot and then stabbed in the chest with a knife. Affixed to the knife was a note with death threats to Ayaan Hirsi Ali, who went into hiding, got bodyguards and eventually moved to the U.S. Their crime: both van Gogh directed the short film Submission, Part 1, which decried Islam’s mistreatment of women. I’ll put it below the picture of van Gogh’s body; it is a perfectly respectable though hard-hitting film: 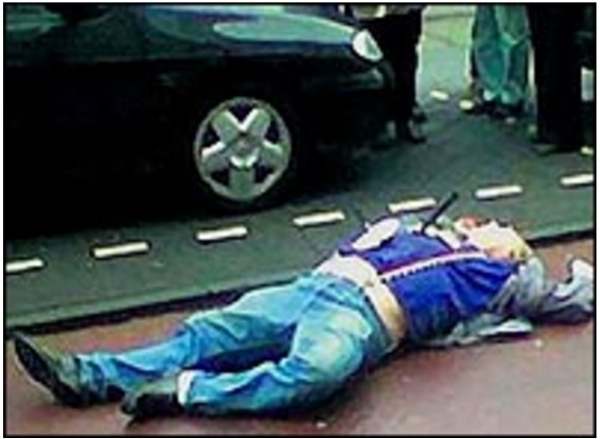 Watch it; it’s only 11 minutes long, and cost van Gogh his life and doomed Hirsi Ali to a lifetime of fear. There’s an English voiceover.

Meanwhile in Dobrzyn: Hili is up in the trees again:

Hili: Even from here I do not see anything interesting.
A: Climb higher. 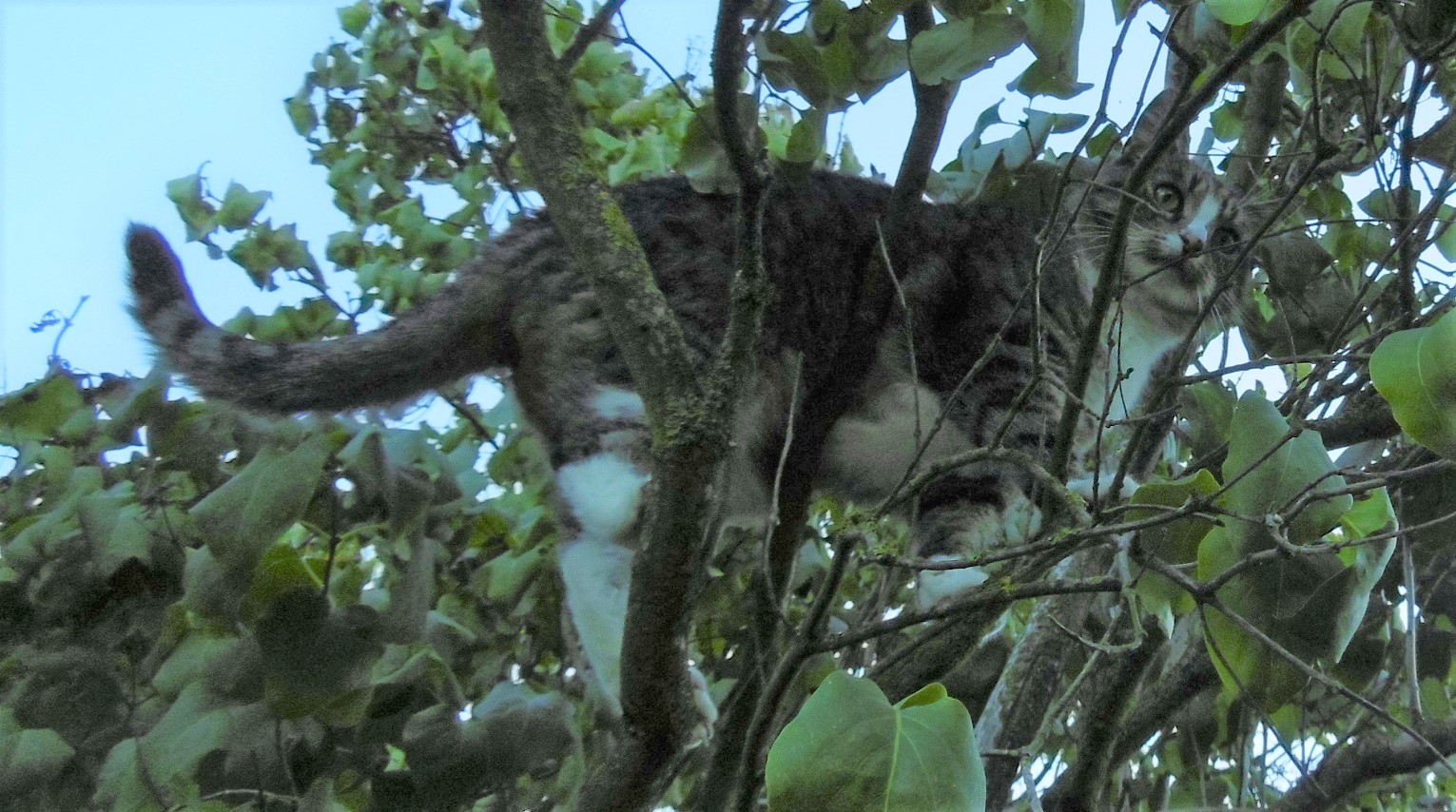 A lovely picture taken by Paulina of Szaron and Kulka cuddling: 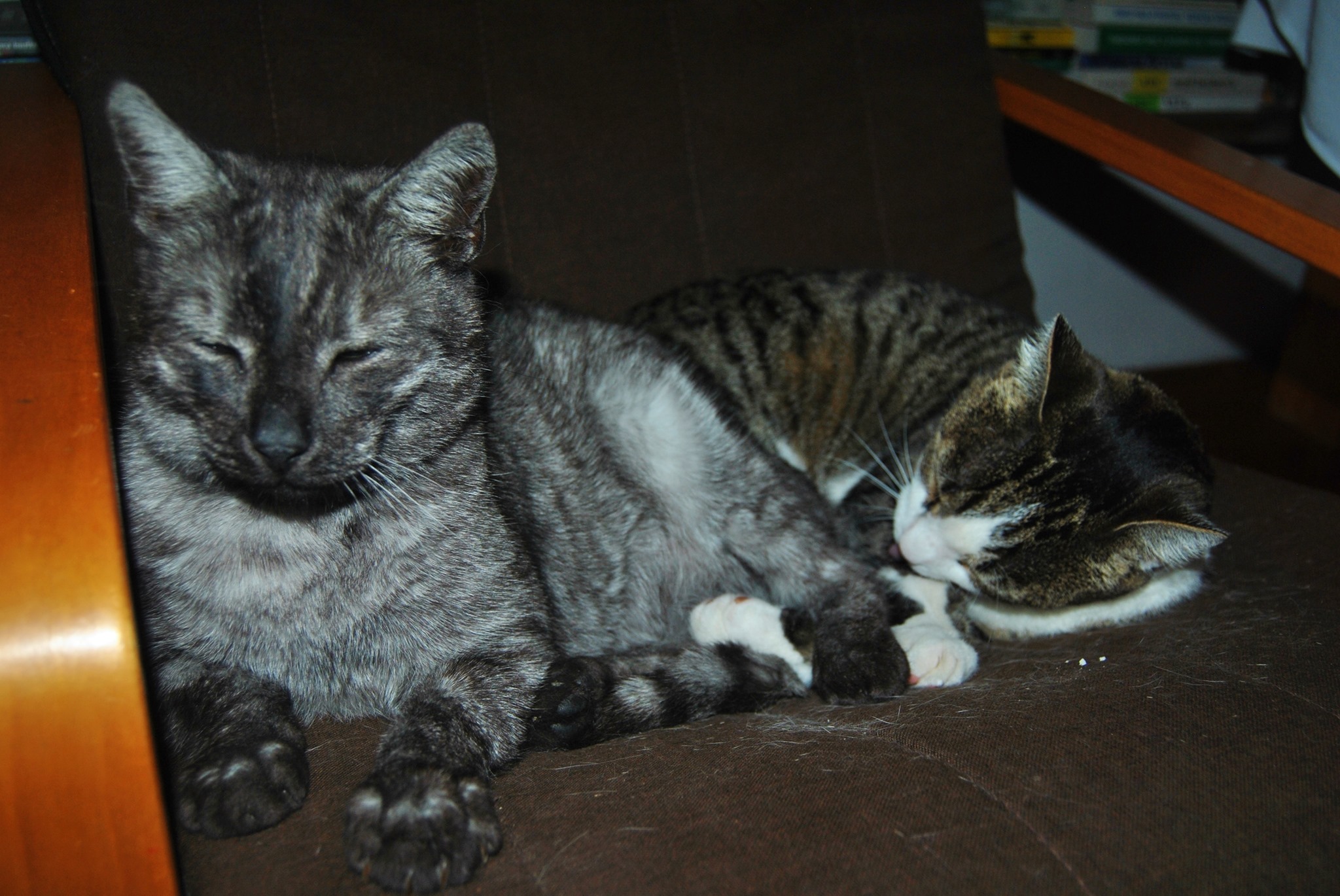 From Lorenzo the Cat: A cat and its staff dressed up on Halloween as twins: 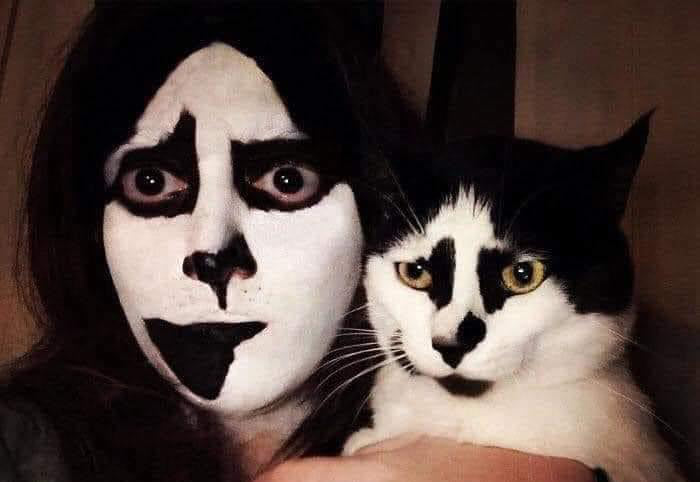 This is a travesty! And it’s real because, if you click on the screenshot, you’ll see that it comes from the Hormel site itself, the makers of Spam. This stuff went on sale Sept. 23, selling out in a matter of only seven hours. There is no more Pumpkin Spice Spam, thank Ceiling Cat. But what is wrong with Americans that they want pumpkin flavor in their Spam?  (h/t Simon) 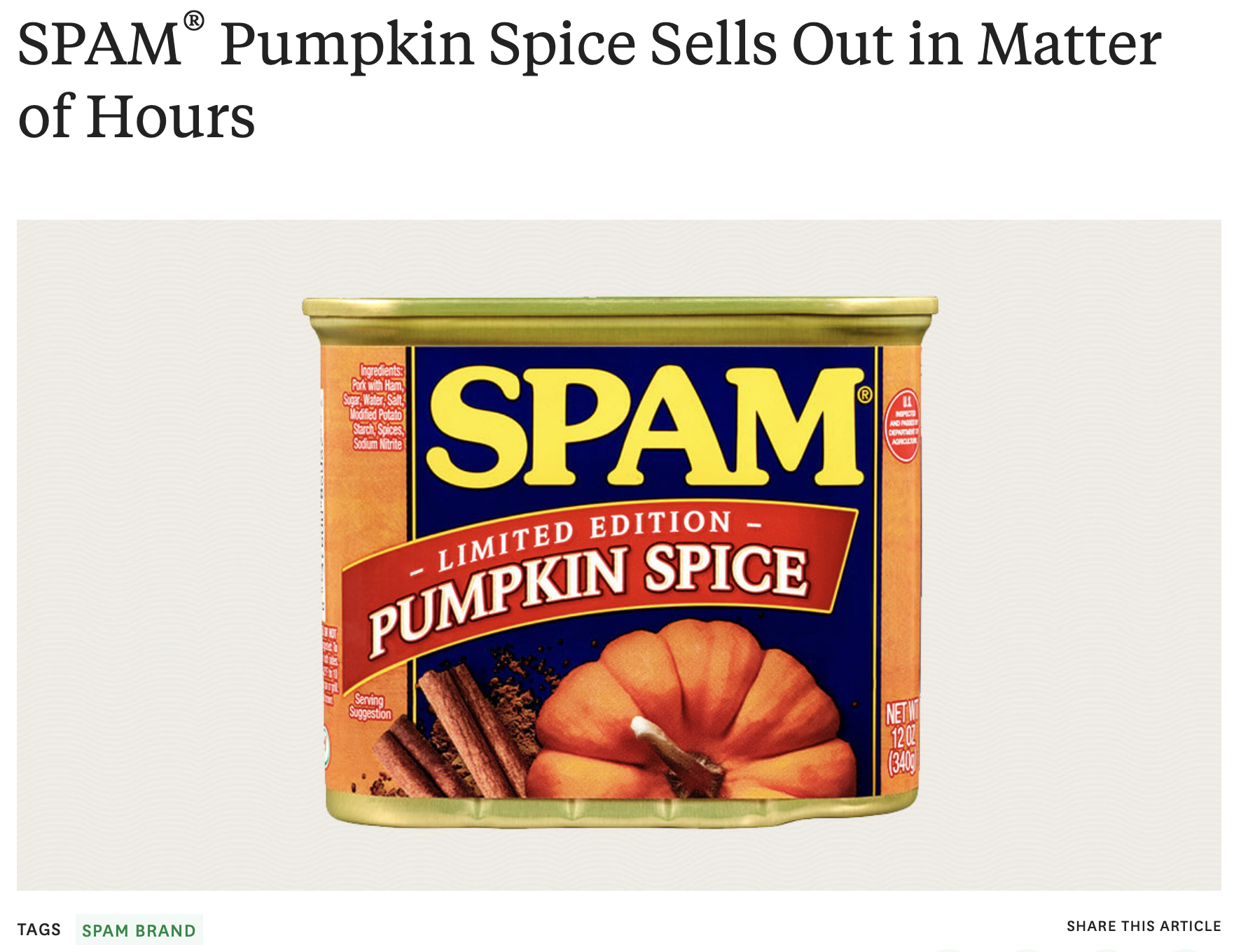 From Bizarre and Wonderful World on Facebook. Look at the size of that thing! 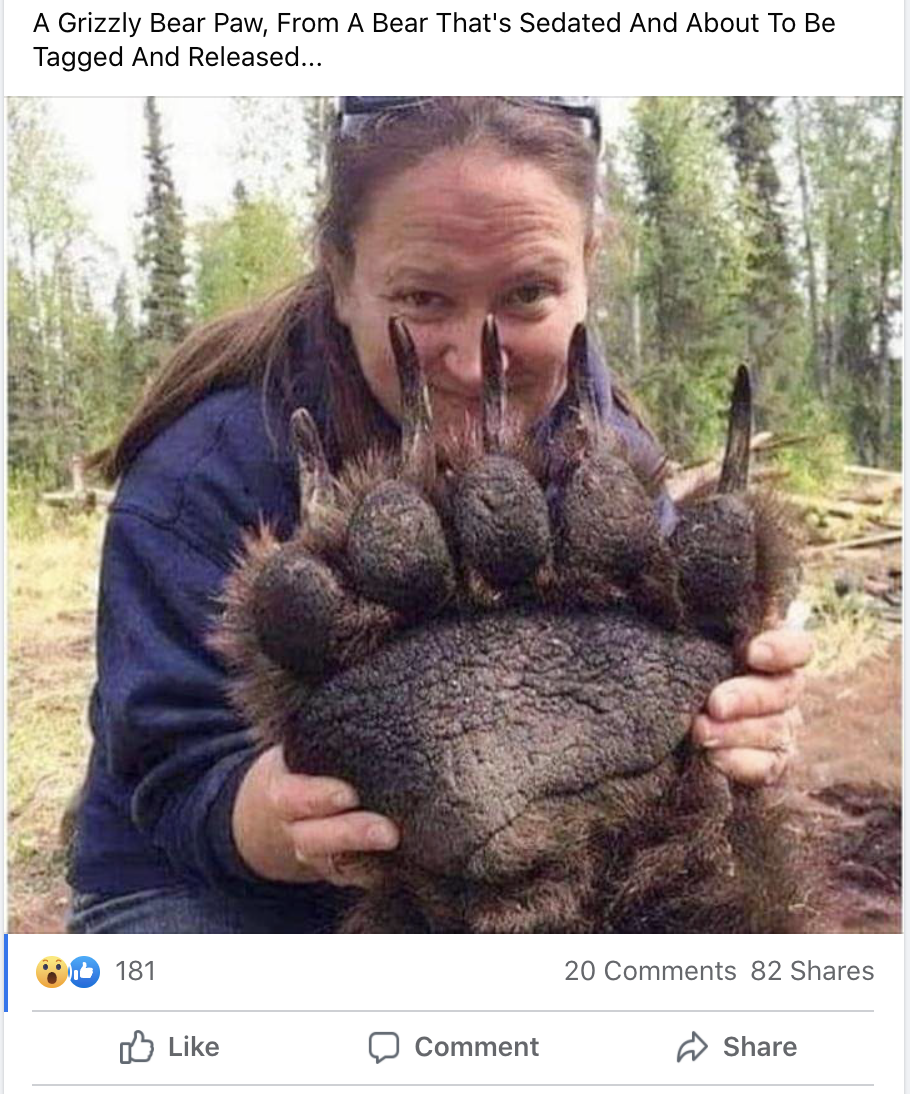 Given the fact that some women have wombs, and some transwomen have testicles, surely we’ve reached the point where we no longer require men in order to exist as a species?

And one from God himelf (pronouns listed as “Thee/thou/thine”).

In response to my ten most recent prayers:

No.
No.
Maybe.
Sorry, can't hear you.
Sure. I was planning on doing that anyway.
No.
Oooh, if you'd asked yesterday I would have said yes.
Are you kidding?!?
Yes, because I'm a fan of that sports team as well.
No.

2 November 1942 | An SS doctor selected 49 sick prisoners at the #Auschwitz infirmary. They were killed with phenol heart injections on that day.

Learn more about world of criminal #medicine in the camp from our #podcast: https://t.co/LaFbnfabRK pic.twitter.com/mfwO6lHoQj

Tweets from Matthew. First, mouthbrooding! (Does it not eat while doing this?)

A Jawfish taking care of the little ones in its mouth. Palm Beach, Florida. #ikelite pic.twitter.com/4EGChzdUNf

What a lovely photo! I presume they’ll be fertilized by sperm nearby in the water:

And a human-powered helicopter: