The American Medical Association (AMA) and the American Psychological Association are now beyond redemption since they’ve decided to steep their organizations in “progressive” ideology and also to issue fulsome apologies for their past behavior. But this I found unbelievable:  tweets sent by Jesse Singal and forwarded by Luana. The AMA is policing language to conform to an extreme Leftist view of the world.  Welcome to Nineteen Eighty-Four‘s Medspeak:

The American Medical Association has just released "Advancing Health Equity: A Guide to Language, Narrative and Concepts," a strange document that calls for doctors to insert progressive politics into even plain statements of fact.https://t.co/bmOdFsQQLf pic.twitter.com/xRg5xXXWpi 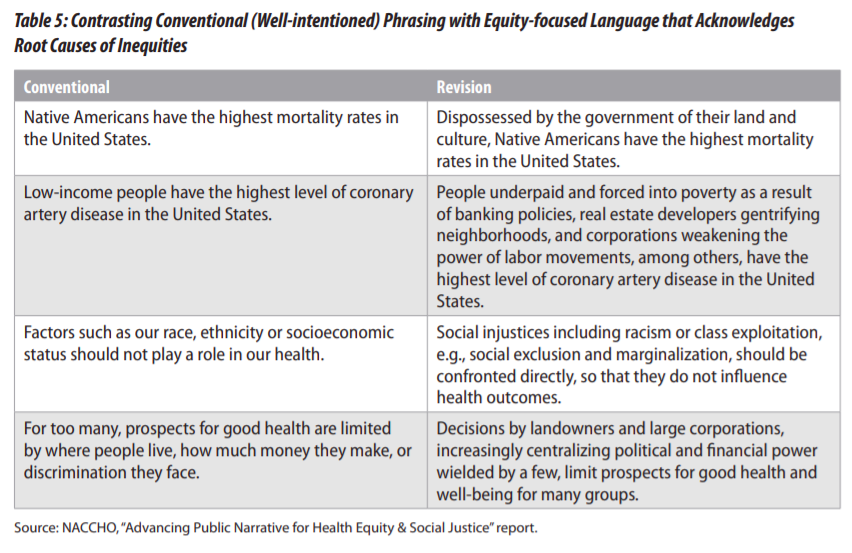 What the AMA is doing here is taking statements of fact and then politicizing them by ascribing those facts to various debatable ideological positions. In other words, they’re adding irrelevant ideological material in service of their viewpoint. This of course stifles any discussion. But since when is the AMA supposed to police language?

I’ll add a few more of Singal’s tweets from that thread; you can enlarge the text for yourself.  There are 15 tweets in the thread.

2/ After the lengthy "Land And Labor Acknowledgement" — new to me but apparently the evolution of the land acknowledgement — the document quickly lays out guidelines that would make it very hard for doctors to write or speak clearly. pic.twitter.com/O6EhiSSDEF

4/ The document doesn't have any guidelines for doctors who don't think each and every instance of 'vulnerability' can be tied direcly to injusice, but that sort of seems to be the point: to expurgate any language that *could be interpreted* as anything but progressive.

8/ Read literally — and keep in mind that this style of writing and thinking is so muddled that you'e going to have a bad time if you do that — the AMA seems to be saying that a paralyzed person who "does not identify as having a disability" is not disabled. pic.twitter.com/88udzXTzPL

You can check Singal’s excerpts out by clicking below, which will take you to the 54-page document. It provides hours of amusement unless you have high blood pressure, in which case you’ll blow an artery. 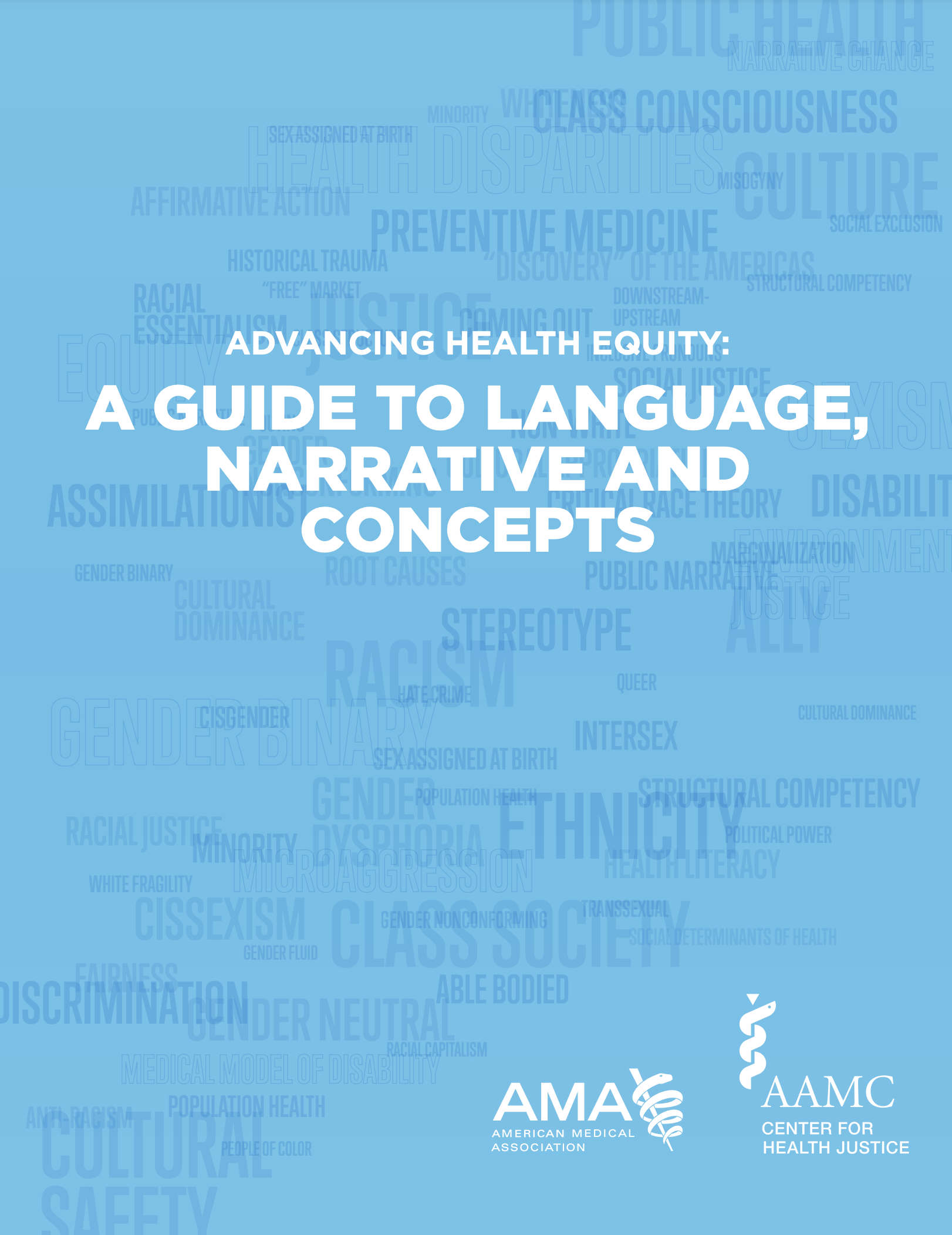 They also have a convenient glossary where you can amuse yourself by turning up stuff like this. Note the “subjective” part, designed to denigrate an objective sexual binary (yes, of course there are very rare exceptions, like hermaphrodites, but they are not members of “a different sex”). The glossary doesn’t even give a hint that there is “biological” sex defined by relative gamete size, and virtually all humans can be classified as one or the other of two sexes. When I sorted flies, they were either male or female (with dissection invariably showing the correct gametes) or, once every six months or so, a gynandromorph, reflecting loss of a chromosome. 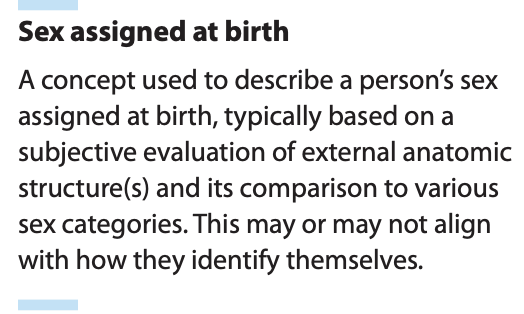 Throughout there is unquestioning endorsement of the ideas of Ibram Kendi and Robin DiAngelo: 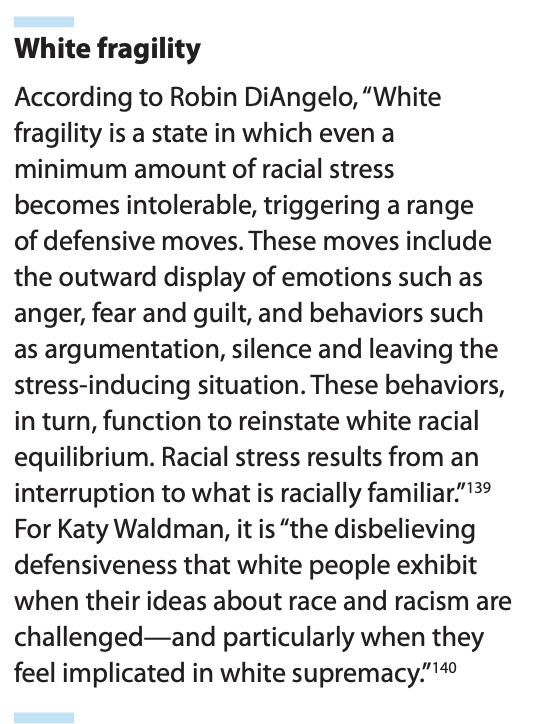 Why is that in there? Why would a doctor ever need the concept of “white fragility”? It’s in there to cater to the Woke.

More: an unquestioning acceptance of the tenets of Kendi, with no dissent permitted. 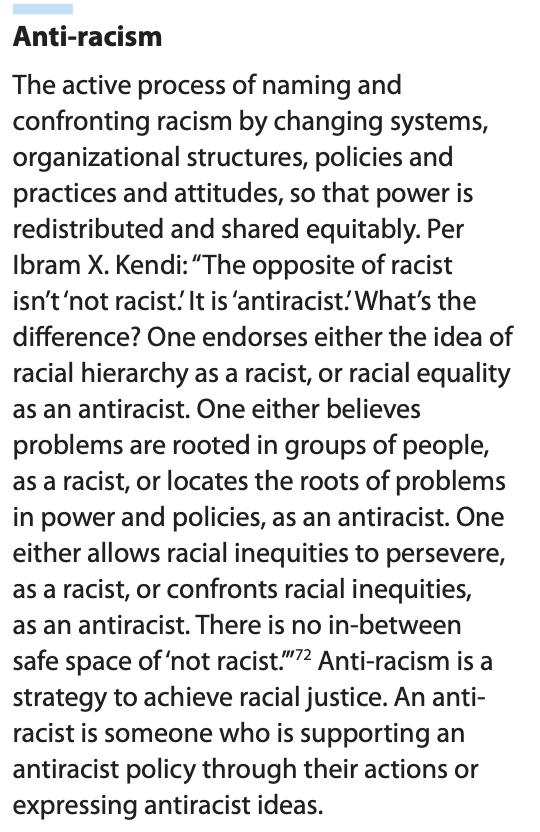 Enough for me. It appears we’ve lost this battle, but I still find value in pushing back, which may inspire others to follow.

[Added note by GCM: The AMA brochure is even nuttier than it appears on first view. It says not to use the words vulnerable, marginalized, and high-risk, but then uses the words repeatedly in its preferred usages!! It’s as though the approved and disapproved sections were written by two different people!]