Knock! Knock!
Who’s there?
Owls say
Owls say who?
Yes, they do.

There’s a Google Doodle gif for Halloween (click on screenshot):

And here’s a list of Halloween and its related celebrations:

And here’s an excellent Halloween costume: 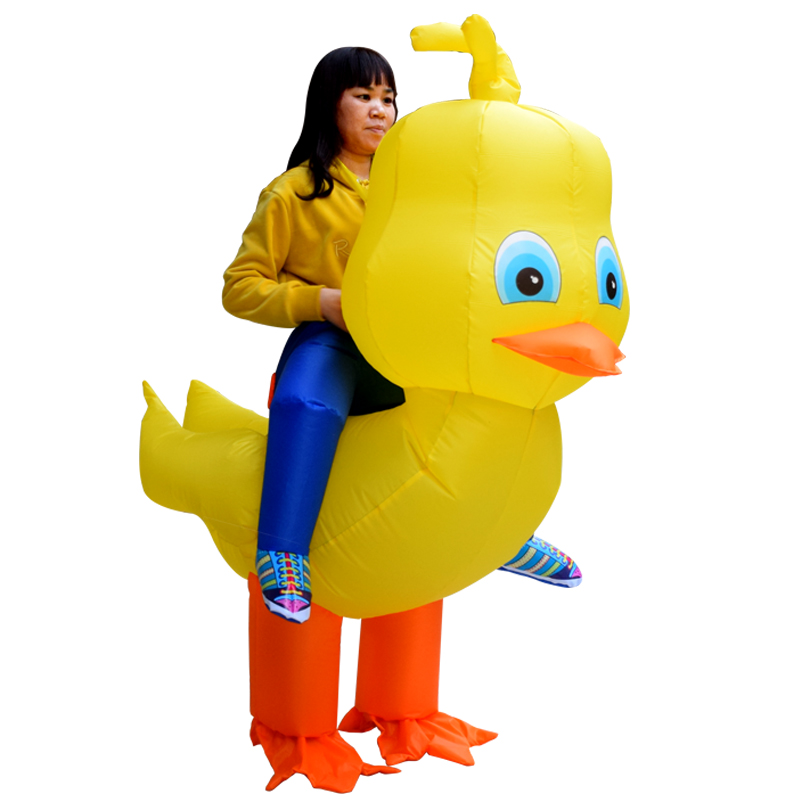 *The Associated Press discusses how and why programs for the “gifted and talented” are being dismantled in secondary schools throughout America, all in the name of equity. The issue is that blacks and Hispanics are underrepresented in such programs compared to “regular” programs, and this inequity is considered prima facie evidence for present-day racism if you adhere to a Kendian agenda. Her are two of the critics of gifted and talented programs:

The changes don’t go far enough for critics like Rita Green, the education chair of the Seattle Chapter of the NAACP. She has called for more work to build environments that nurture the intellectual development of all the district’s 50,000 schoolchildren.

. . .One such constituent, Zakiyah Ansari, the New York City director for the Alliance for Quality Education, wants Adams to follow through with de Blasio’s pledge.

“We believe every child is a gifted child, every child is a talented child,” Ansari said. “We have to have people as angry about taking away one program that impacts a few people and be more upset about the Black and brown kids who haven’t had access to excellent education.”

*The New York Times reports that three professors from the University of Florida have been barred from testifying for the prosecution in a lawsuit trying to overturn the state’s new restrictive voting rights bill. This is clearly a violation of both academic freedom and the First Amendment, but the University makes a specious claim:

University officials told the three that because the school was a state institution, participating in a lawsuit against the state “is adverse to U.F.’s interests” and could not be permitted. In their filing, the lawyers sought to question Gov. Ron DeSantis, a Republican, on whether he was involved in the decision.

Mr. DeSantis has resisted questioning, arguing that all of his communications about the law are protected from disclosure because discussions about legislation are privileged.

The school has always let professors testify in court cases, even those involving criticism of the party in power in Florida, which is also “adverse to U.F.’s interests. I’m betting that DeSantis has pressured the University, saying that he’d withhold funds from the school if the professors testify. In the end, I think they will, for this is an open and shut issue. (h/t Bill)

*Also in the NYT, an op-ed by Tressie McMillam Cottom called “Why we should talk about what Kyrsten Sinema is wearing.” (That’s a clickbait title if ever there was one.) It turns out that the answer, for Cottom, is more a sociological one—though an interesting one—but has little to do with how we assess her politics, or of little use those who wish to change Sinema’s stand, which is obstructing Biden’s two funding bills.

*The dorm below would (and will be) be a dreadful place to live during college, especially because UCSB is one of the nicest campuses in the U.S. The Santa Barbara Independent reports this (h/t Matthew)

A consulting architect on [The University of Californa at Santa Barbara’s] Design Review Committee has quit his post in protest over the university’s proposed Munger Hall project, calling the massive, mostly-windowless dormitory plan “unsupportable from my perspective as an architect, a parent, and a human being.”

In his October 25 resignation letter to UCSB Campus Architect Julie Hendricks, Dennis McFadden ― a well-respected Southern California architect with 15 years on the committee ― goes scorched earth on the radical new building concept, which calls for an 11-story, 1.68-million-square-foot structure that would house up to 4,500 students, 94 percent of whom would not have windows in their small, single-occupancy bedrooms.

The idea was conceived by 97-year-old billionaire-investor turned amateur-architect Charles Munger, who donated $200 million toward the project with the condition that his blueprints be followed exactly. Munger maintains the small living quarters would coax residents out of their rooms and into larger common areas, where they could interact and collaborate.

Here’s the horrible dorm, and its floor plan below that. Crikey, would you want to live there for four years? 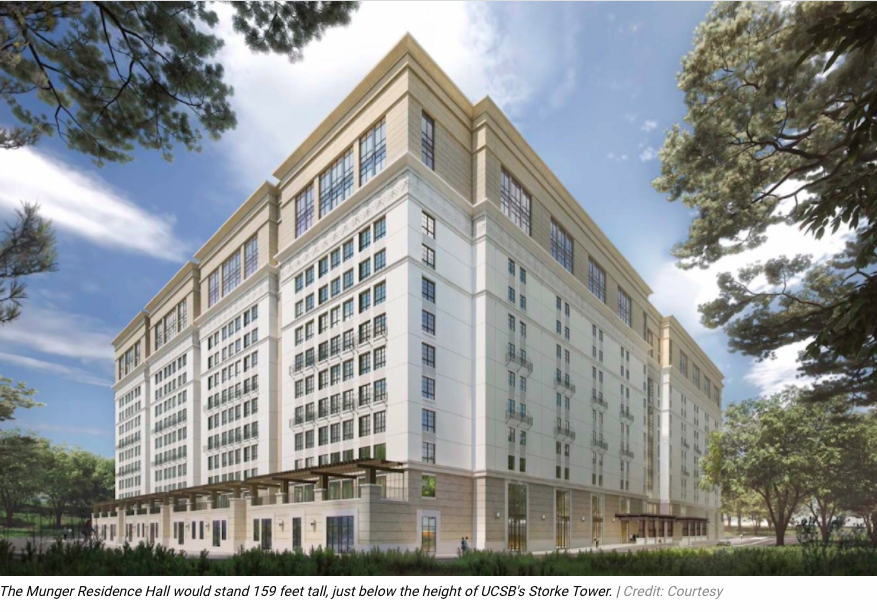 The architect who resigned said the dorm “would qualify as the eighth densest neighborhood on the planet, falling just short of Dhaka, Bangladesh. It would be able to house Princeton University’s entire undergraduate population, or all five Claremont Colleges. . . The project is essentially the student life portion of a mid-sized university campus in a box.”

The University is going to build it anyway!  Usually money is given to universities without such strict conditions. Jebus!

Stuff that happened on October 31 includes:

It’s a Lutheran Church now, and Martin is buried inside. Here’s his tomb. 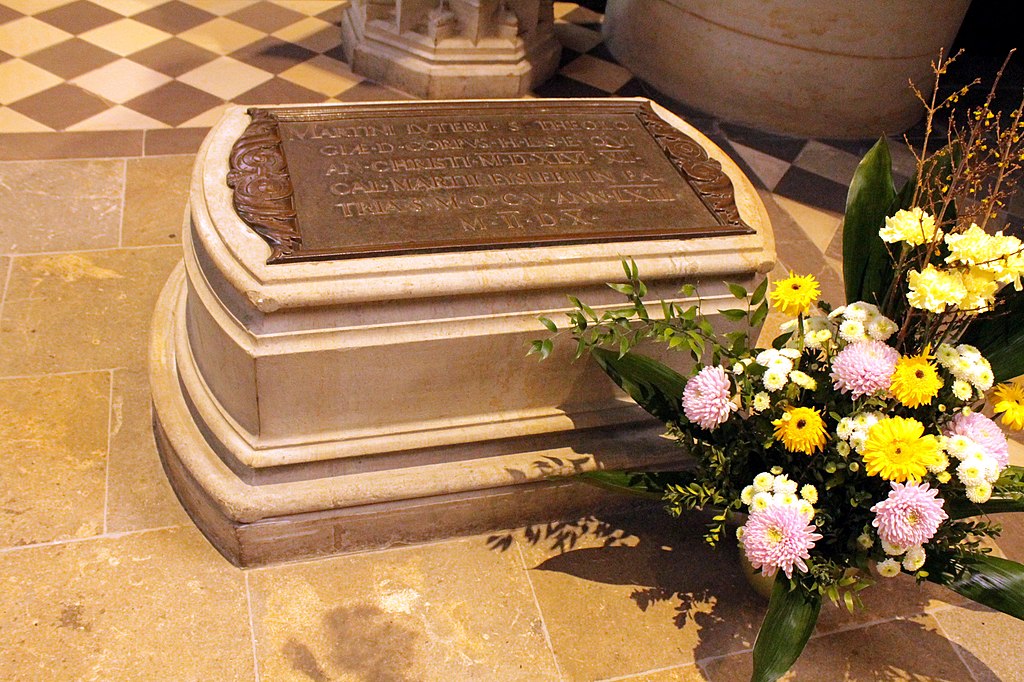 The famous doors seem to be gone, but in truth the claim that Luther posted his manifesto on them is questionable. But they built these ones below, described in Wikipedia as “‘Theses Doors’, commemorating Luther’s Ninety-five Theses were installed on Luther’s 375th birthday in 1858.” 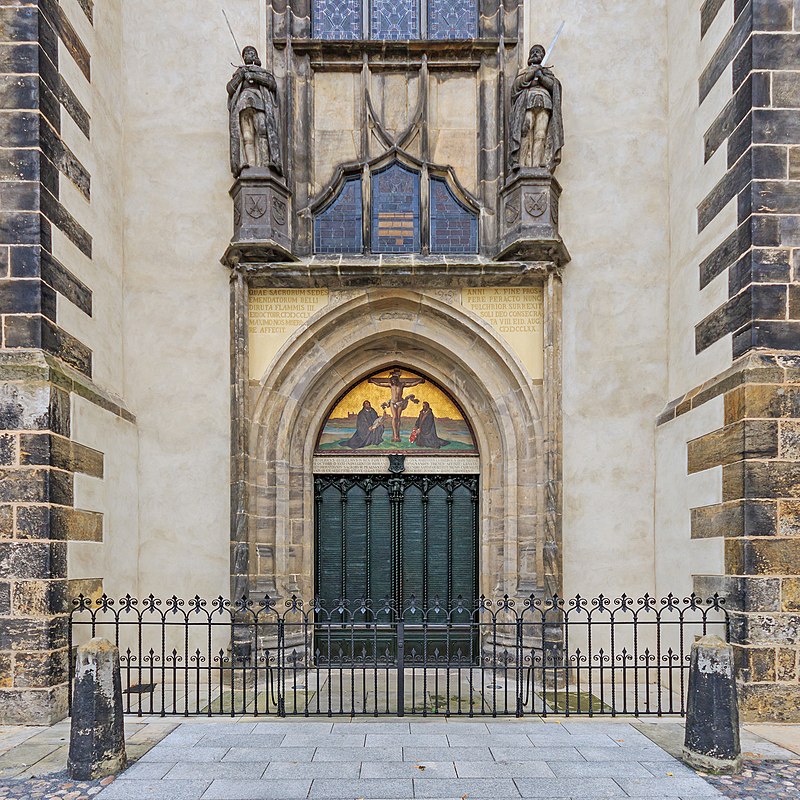 Here’s a photo of the attack, which took place in what is now southern Israel. Reinforced by later troops, it ultimately led to the British capture of Jerusalem. Note that the first wave of attackers brandished only bayonets as they charged; the rifles are on their backs.

Here’s where Marble Bar is (there are stromatolites nearby!), and then a view of that godforsaken town. (Read the NYT article on what it’s like to live there). 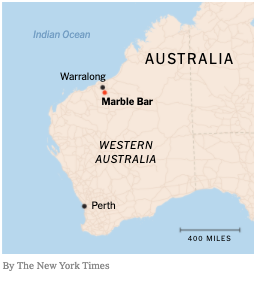 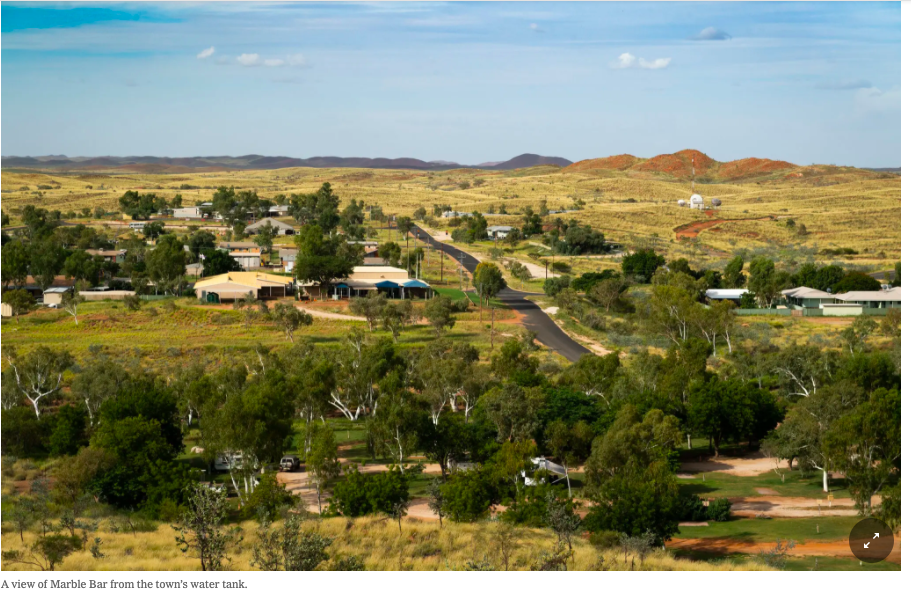 But it’s not the hottest town in Australia! That honor goes to Wyndham, Western Australia, located on the map below with a picture of that town, where “In 1946, Wyndham recorded 333 consecutive days of temperatures over 32 °C (90 °F).” The population is 780 sweating Aussies. 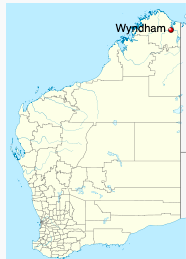 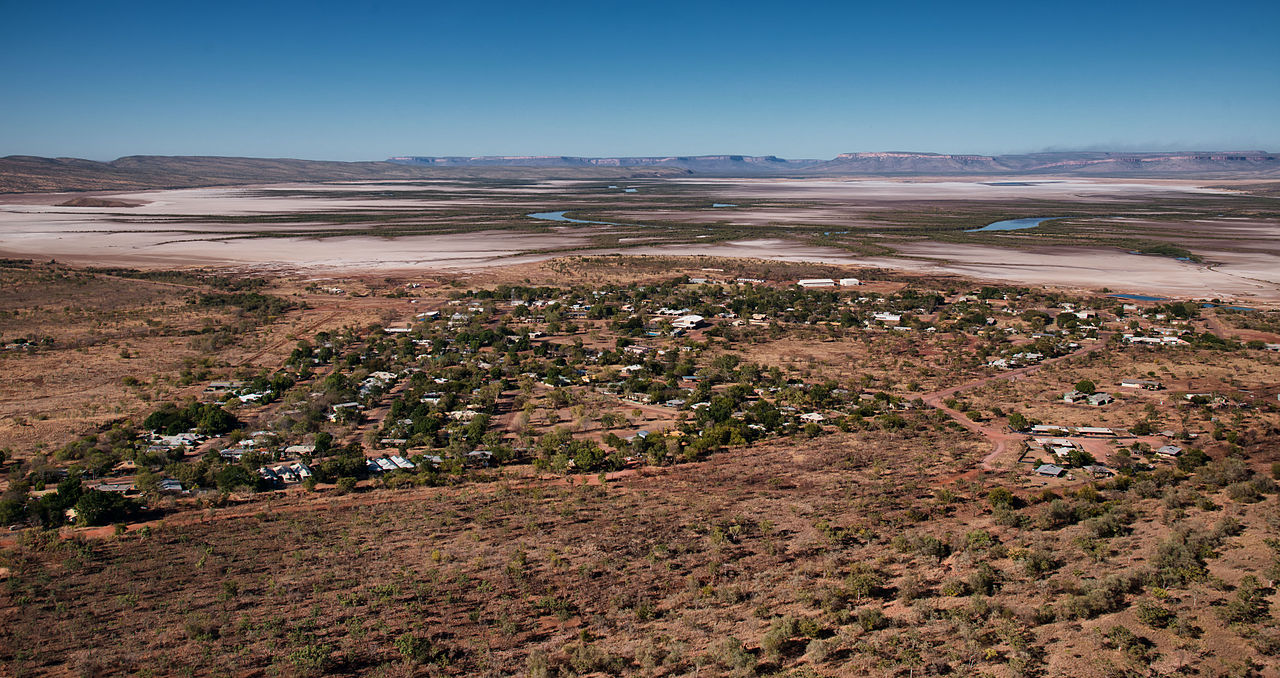 Can you name all four figures sculpted on the mountain? This wouldn’t be done today, because at least three of them have had statues taken down or have been cancelled. 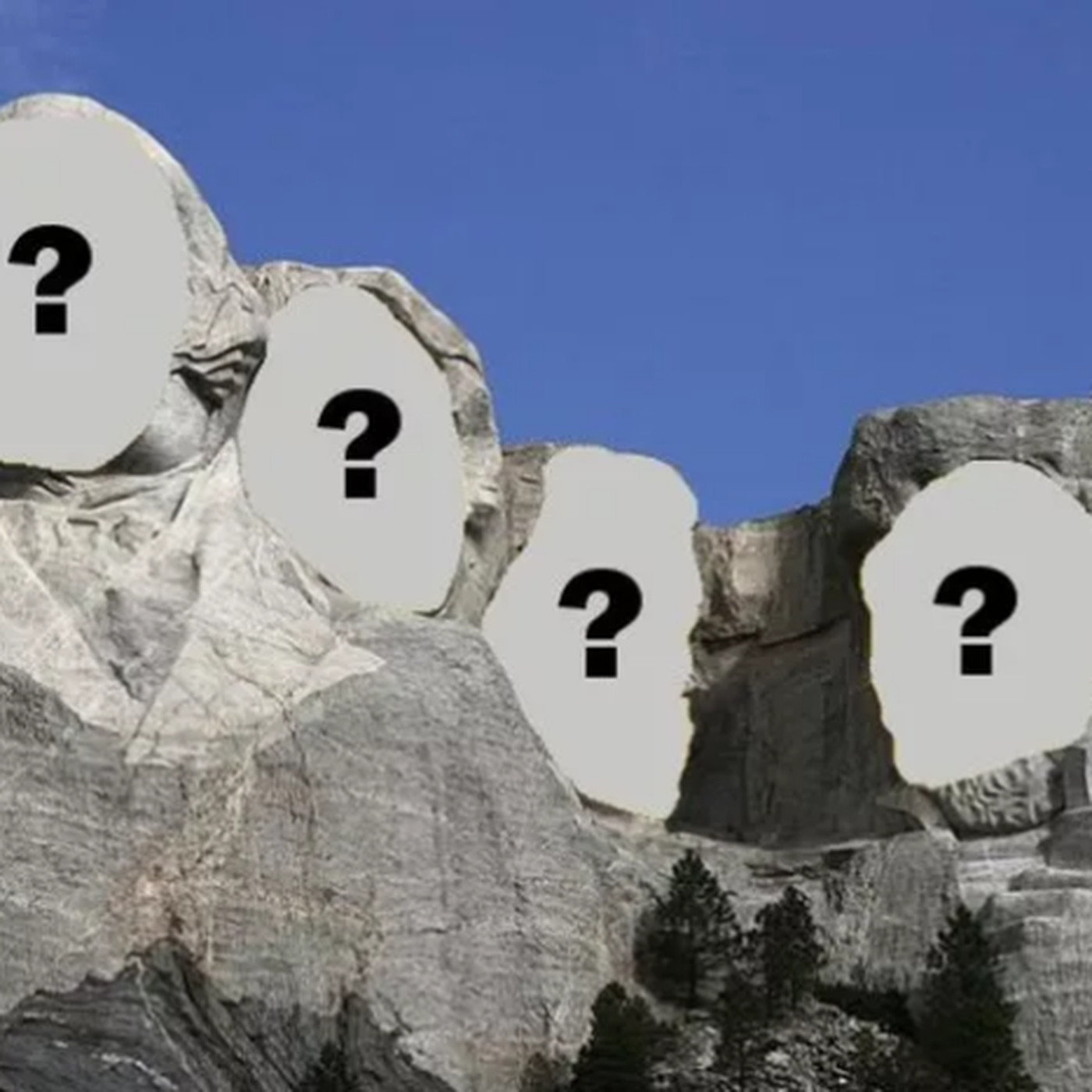 Here’s the designer, Gutzon Borglum, addressing a crowd before the sculpture in statu nascendi: 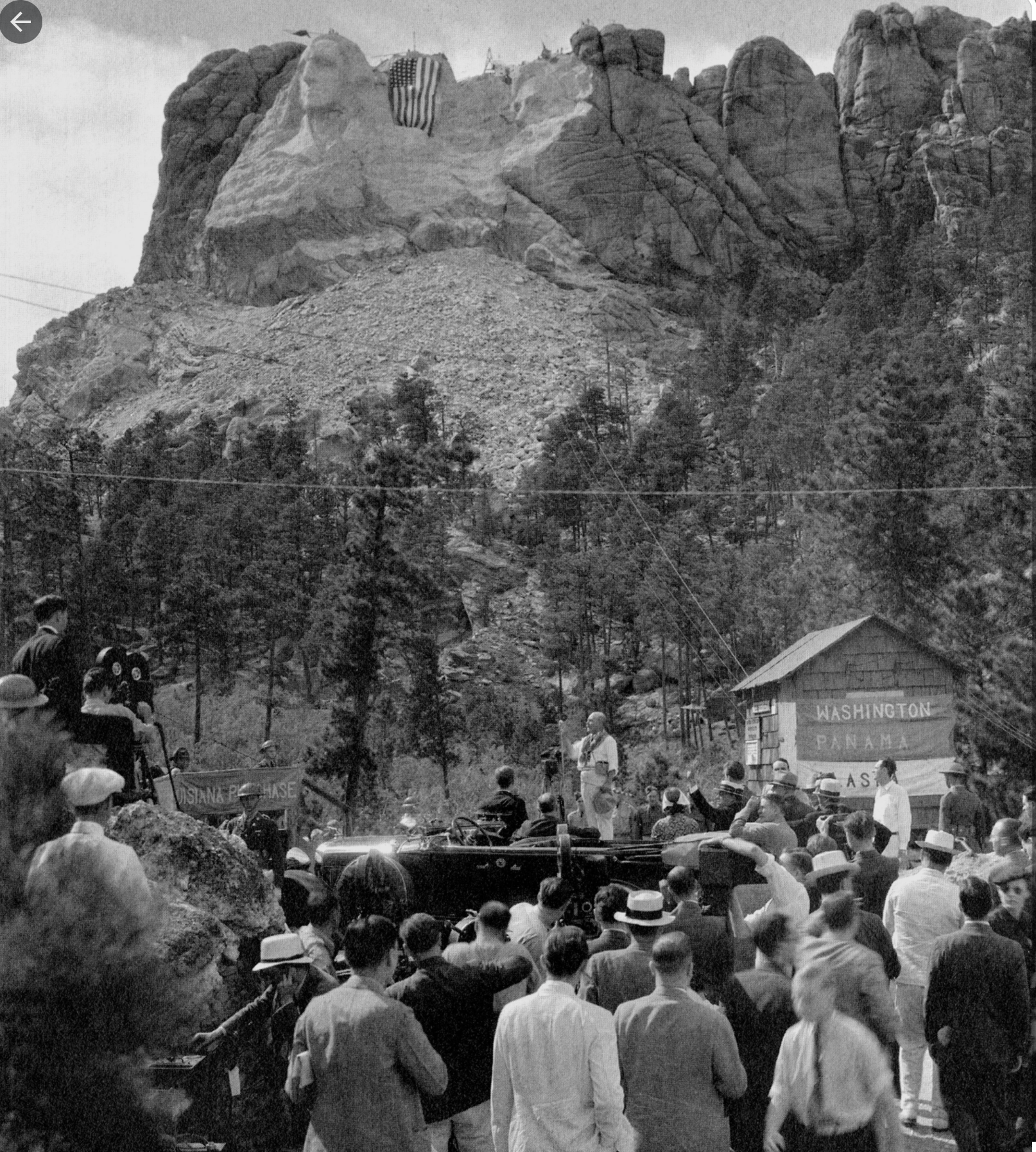 A photo from Wikipedia labeled: “Today, the spot where Indira Gandhi was assassinated is marked by a glass opening in the crystal pathway at the Indira Gandhi Memorial”: 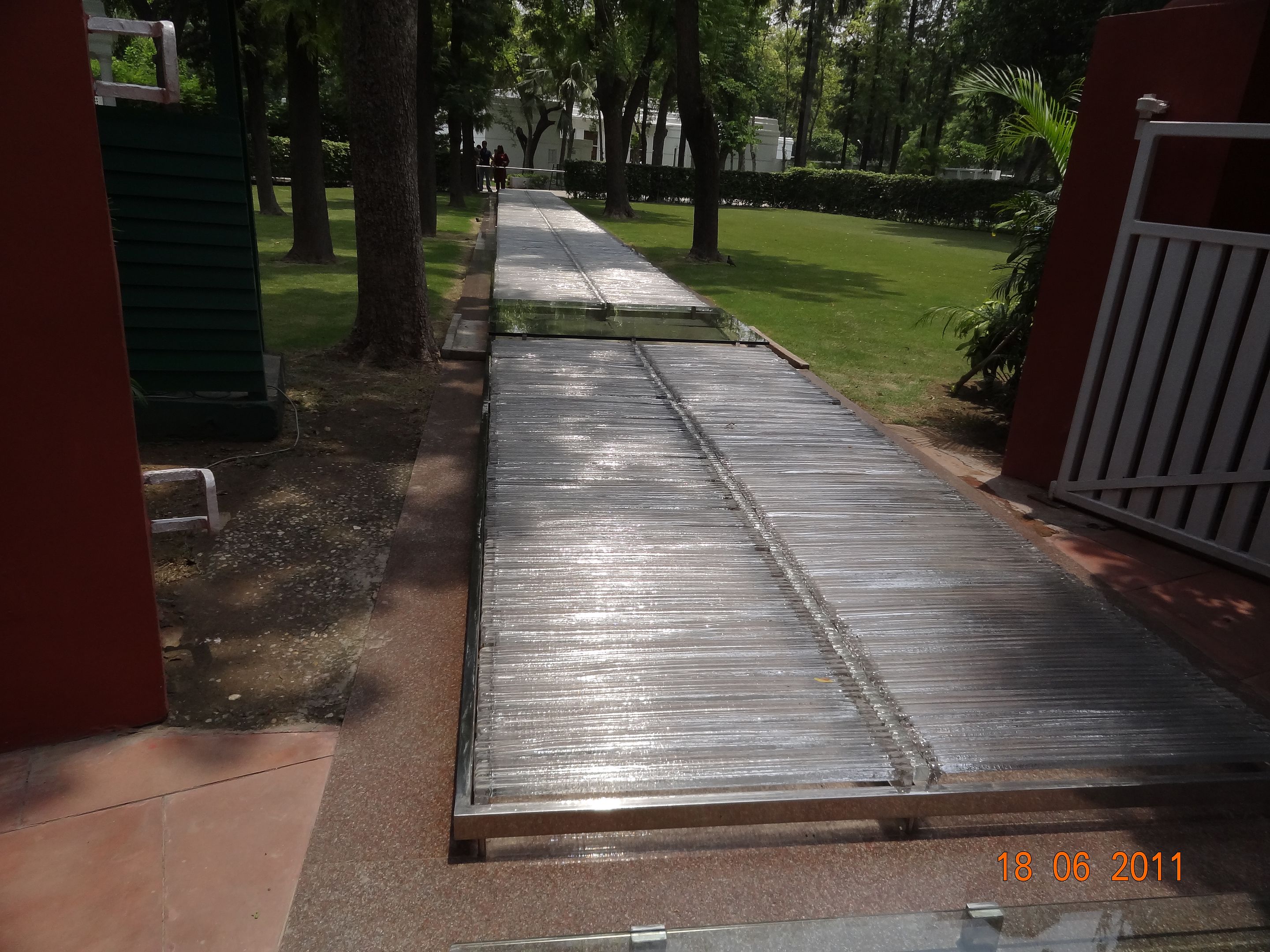 He was the youngest person to accomplish this feat though not the first.  Here’s a short video of Martin:

Keats died at only 25 of tuberculosis. What great poetry we’d have had he lived longer.  Here’s a life mask from 1816 followed by a photo of Keats’s grave in Rome (note that his name isn’t on the tombstone). 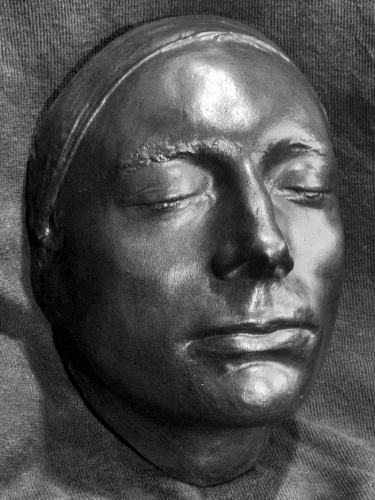 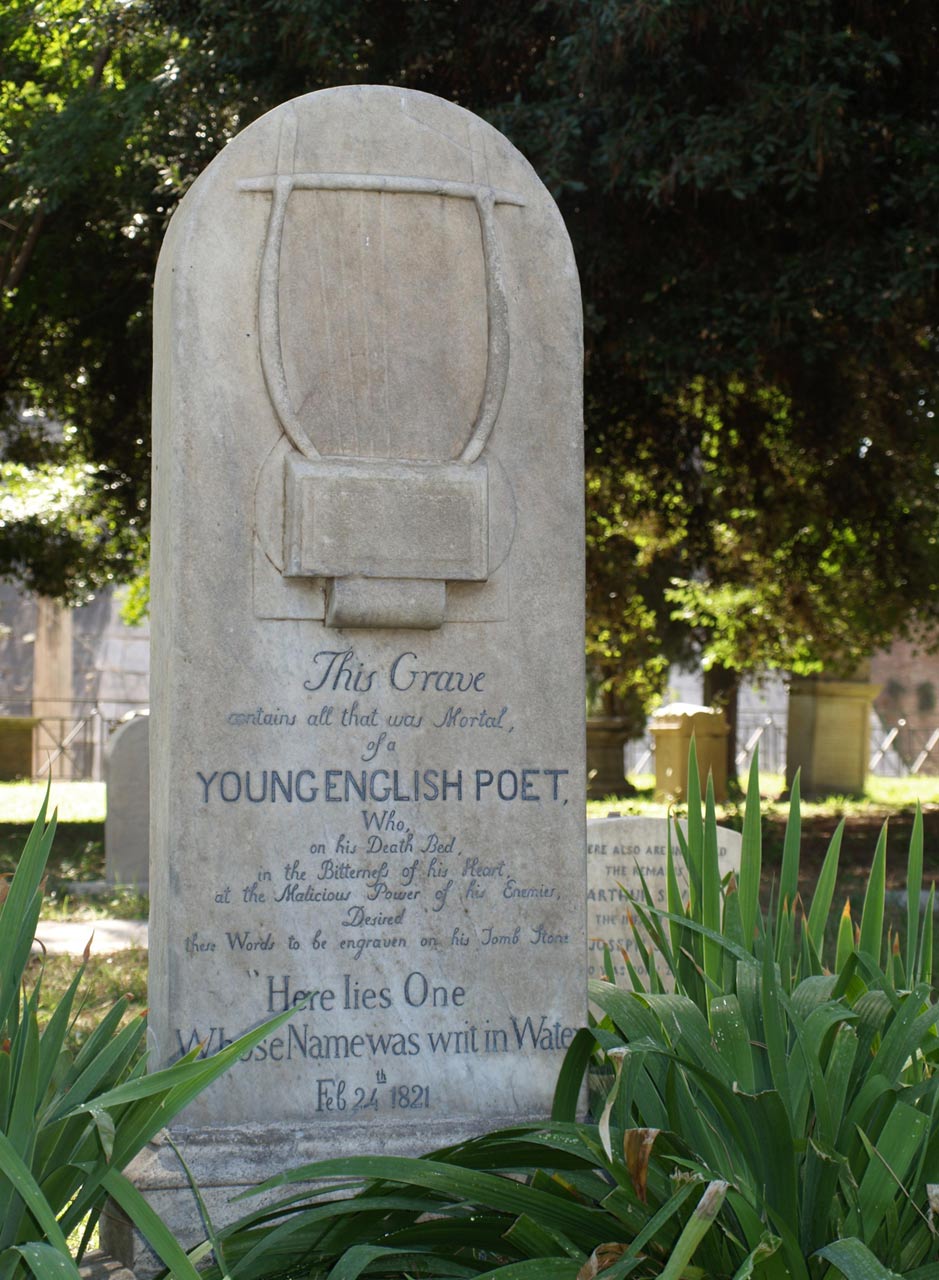 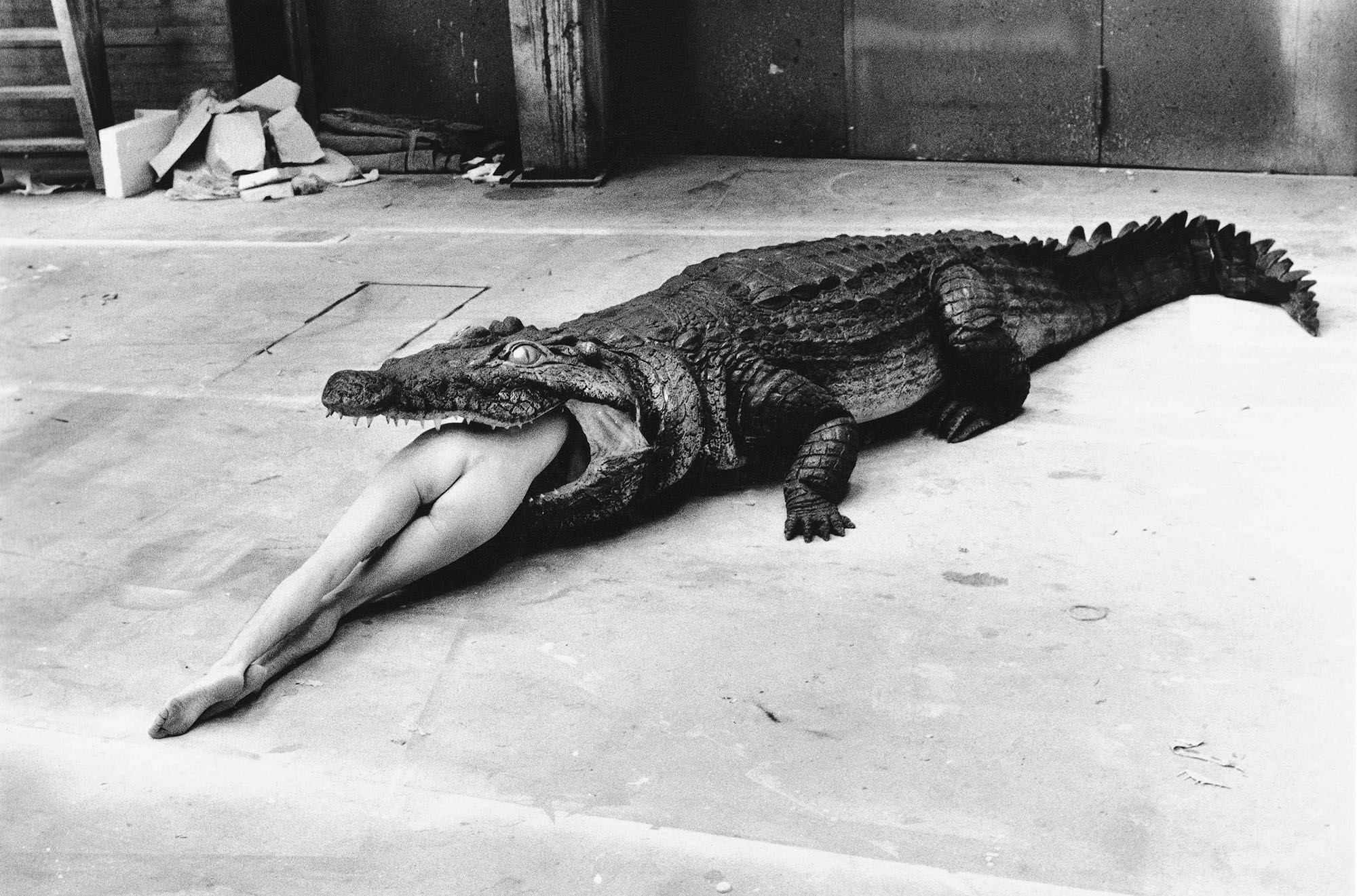 Those who died on October 31 include: 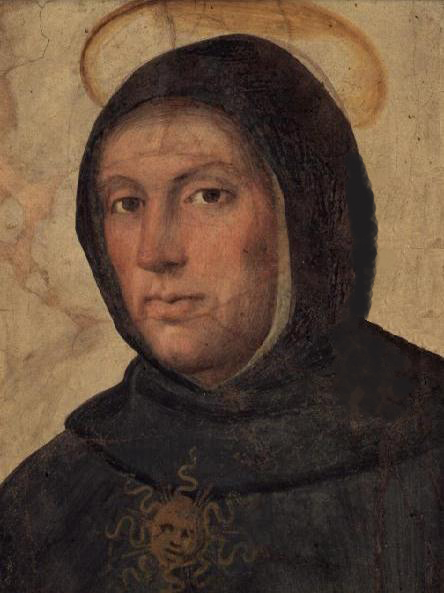 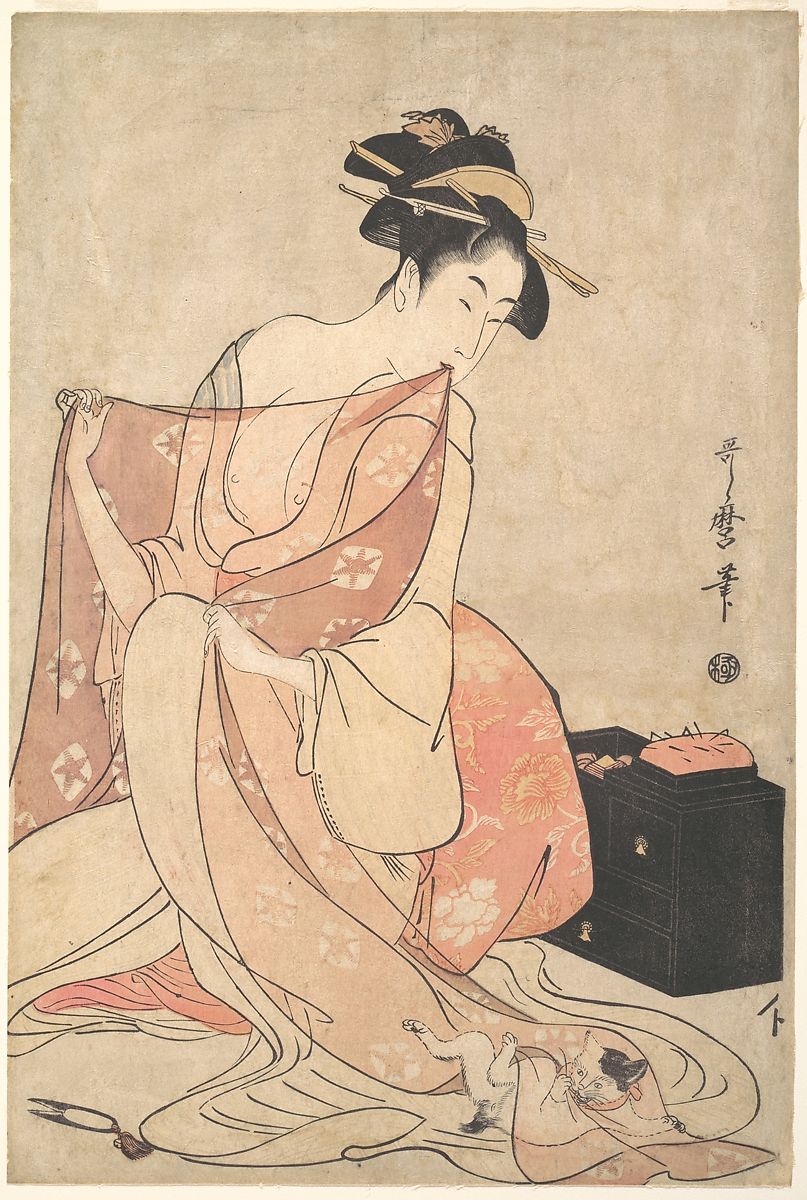 I never really encountered the work of Schiele until I visited the Leopold Museum in Vienna, where I was mesmerized by his paintings. I now consider him one of the very greatest modern artists. Below is a photo I took of one of his paintings when I visited in October, 2012. This is “Self Portrait With Lowered Head” (1912).

Schiele died at only 28, another great loss to art. He succumbed of the Spanish flu in the fall of 1918, only three days after his wife died. And that’s about the time my paternal grandmother died in the same epidemic. 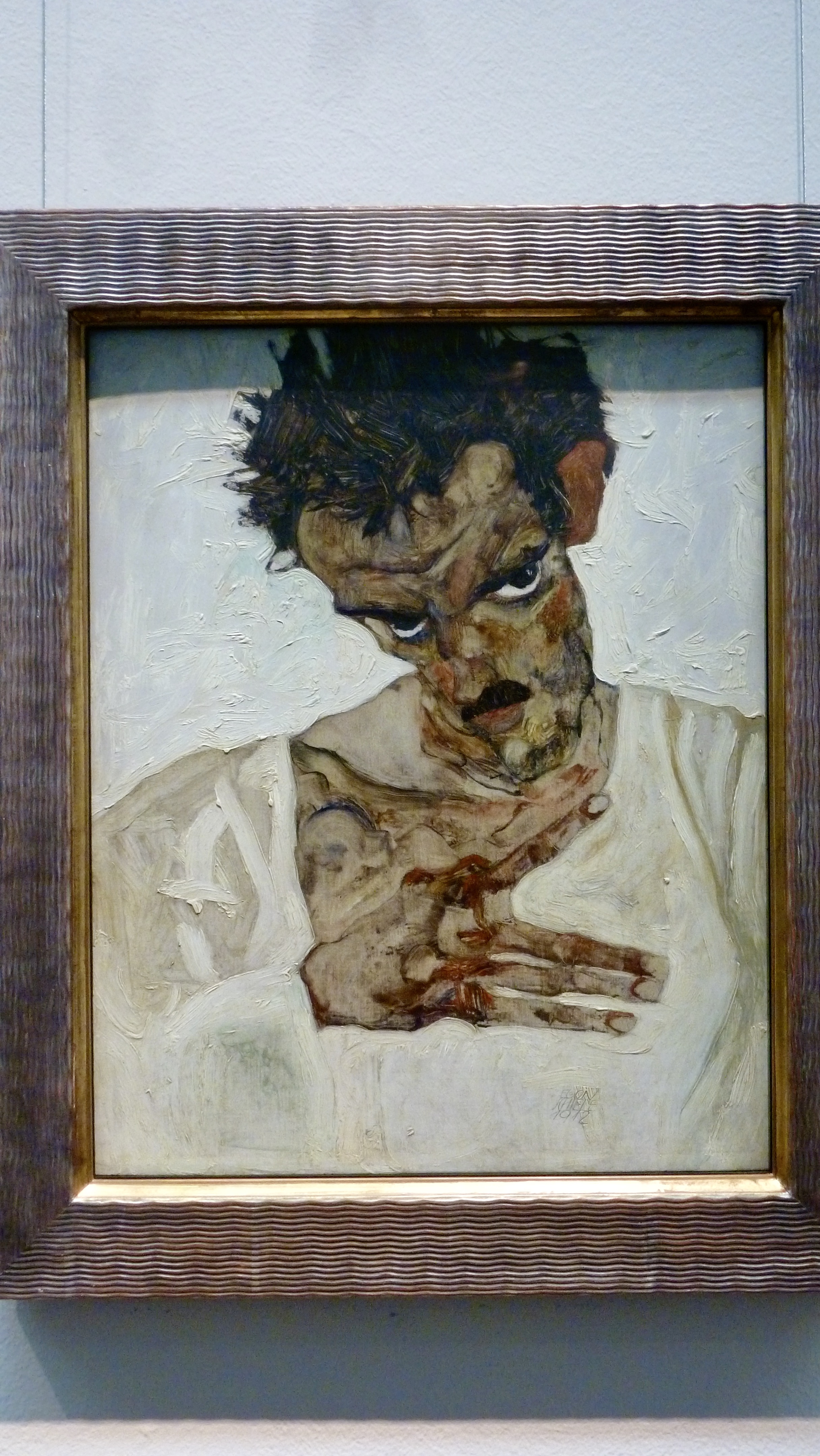 Connery in Scottish regalia, complete with family tartan and a sporran.

Meanwhile in Dobrzyn, Hili has her encounter with Kulka, but Kulka doesn’t back down.

Hili: Get away from here!
Kulka: And what are you going to do to me if I don’t? 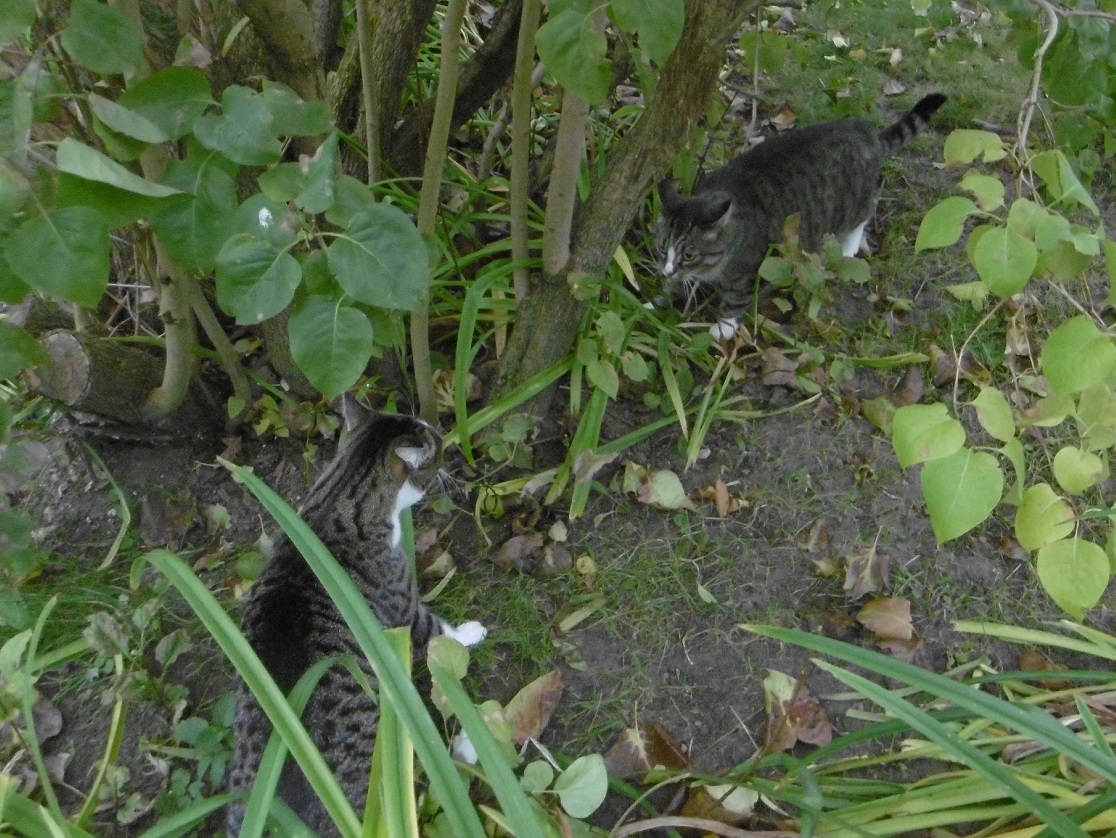 And, in nearby Wloclawek, both Leon and Mietek have monologues. Leon demands approbation, while Mietek orders his staff around.

Leon: And now start to admire my wisdom.

Mietek, sitting on papers that Elzbieta is supposed to grade, prods her to get to work. 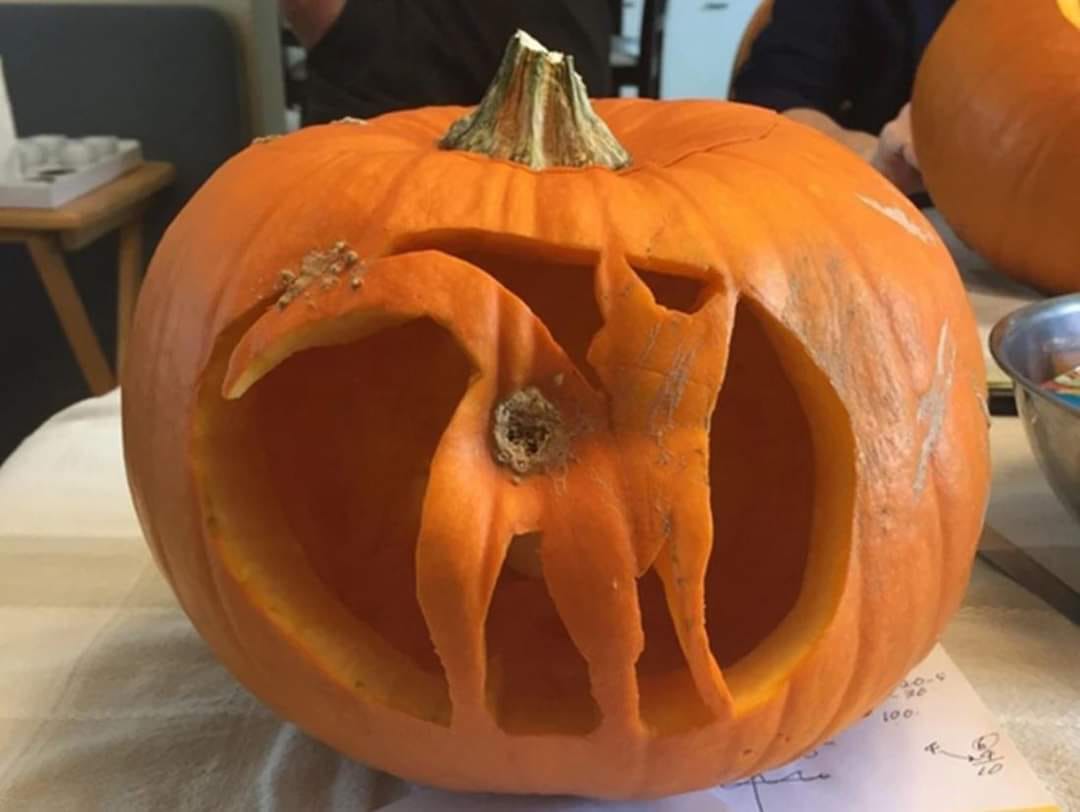 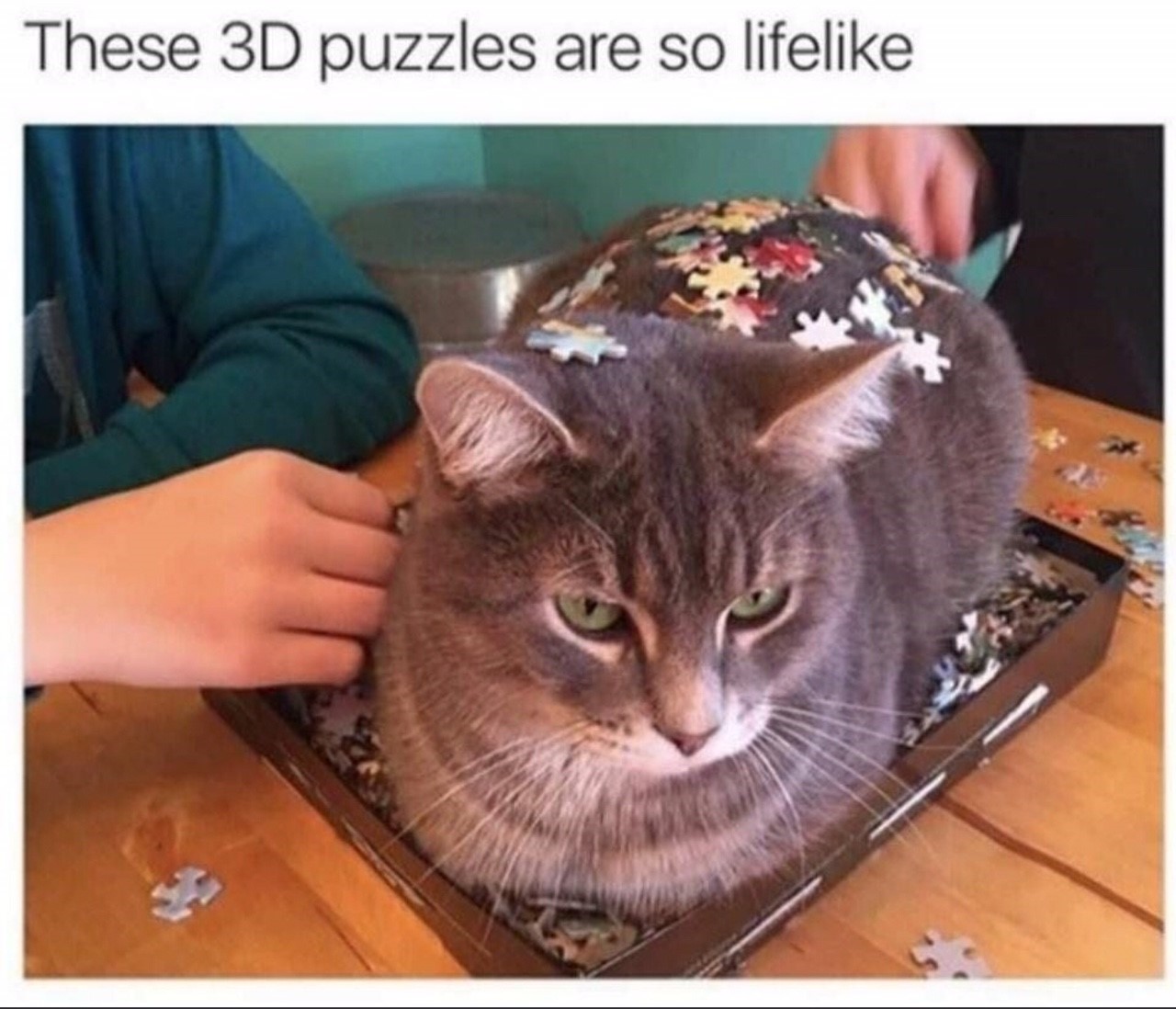 Titania’s new piece speculates about how Gandhi would have dealt with trans people:

Mahatma Gandhi would have been a trailblazer for genderqueer rights if xe were alive today.

My latest column for @TheCriticMag.https://t.co/xVvqRQREwt

Iyad Kiyani, a municipal worker, was brutally beaten for asking for his unpaid salary of 6 months pic.twitter.com/KCsFSicXUo

From the British Museum: Proof of love in the olden days. Nowadays this would be locked to the the Pont des Arts bridge over the Seine.

This miniature gold enamelled padlock locket is engraved with a romantic message in French, and was made in the late medieval period, between 1400–64 ✨

He was deported to #Auschwitz from #Theresienstadt ghetto on 23 October 1944. He was murdered in a gas chamber after the selection. pic.twitter.com/D6ogzKvYJx

Tweets from Matthew. This first one feature innovative drumming by Ringo. Who knew? Do listen if you’re a Beatles fan.

As someone who doesn’t understand much about music, and who doesn’t especially get the Beatles, this made me do a lovely “Ahhhh!” pic.twitter.com/qeUtCJCcsy

Matthew says that this is a great figure. It is.

Superb illustration showing some of the life that depends on deadwood.

You can get it here.https://t.co/xlCBbVnwFL

A needy dog begs for affection:

Always begs the cat for the kisses. pic.twitter.com/E4560FBNJ6

Can CRISPR do this?

My son is still dreaming up his DNA experiments. This is a cat spliced with red squirrel DNA. It’s a cat but with a fantastically bushy squirrel tail. pic.twitter.com/VtbYOXhXiu

32 thoughts on “Sunday: Hili dialogue (and Leon and Mietek monologues)”