I am in dire need of photos, people. Send me some, please!

Here are some photos of a handsome bird from reader Jim McCormac, who has a blog and a “massive photo website“. His captions are indented and you can enlarge the photos by clicking on them:

Here’s some images and brief narration of one of our handsomest terns, the Forster’s Tern.

A Forster’s Tern (Sterna forsteri) rests on a rail overlooking fishy waters. Note the bird’s deformed bill. Its lower mandible was damaged at some point. This tern is an adult, and at least 1.5 years old, and the injury does not look recent. Hard to say what happened, but the bottom line for the animal is whether the damage adversely impacts its fishing ability. We will check in on that issue in a few photos. 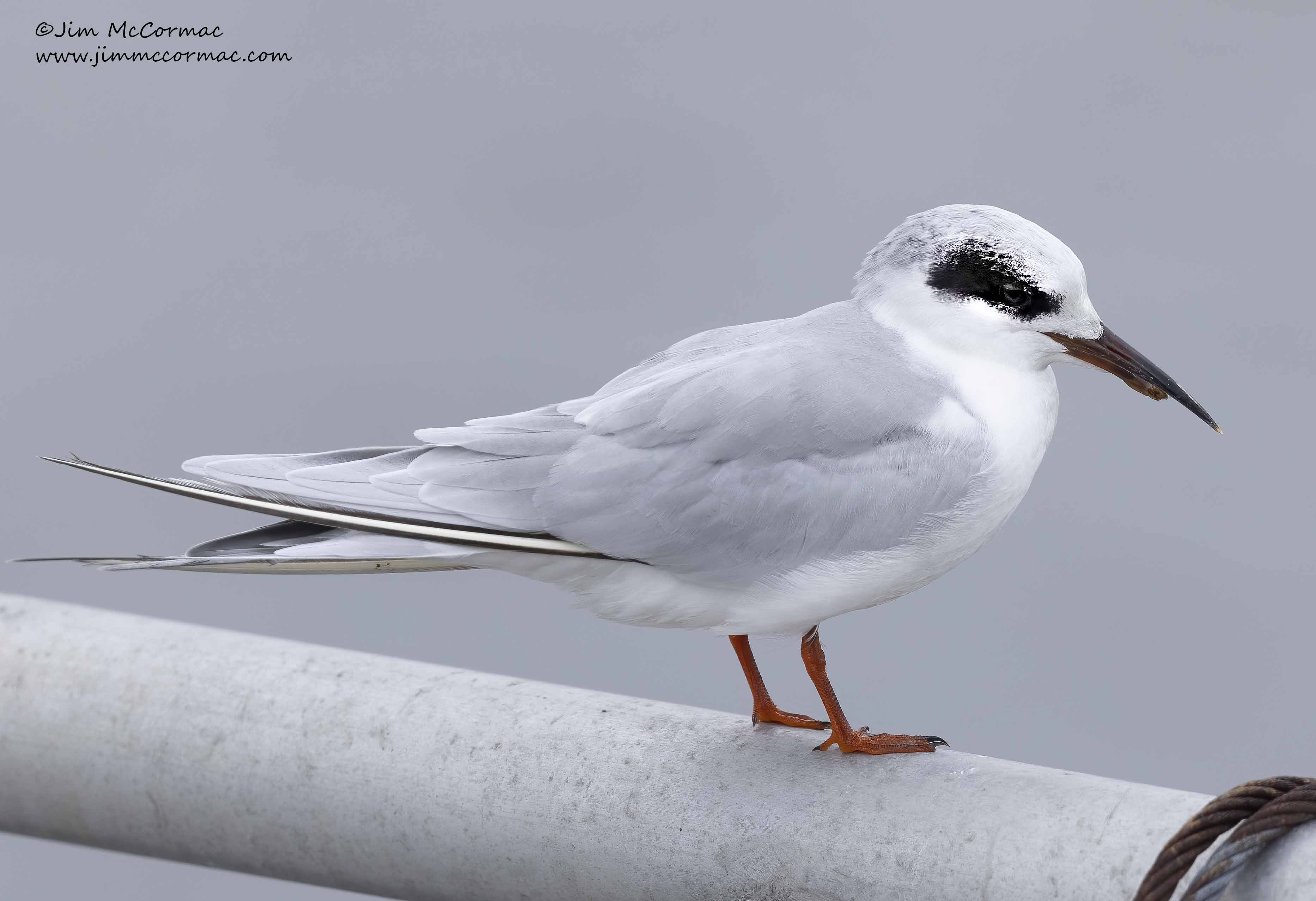 A Forster’s Tern banks, revealing its long wings and tremendous wing to body ratio. It is a master aeronaut, and woe to the piscivorous crowd when one these terns hovers overhead.

On an early October trip to Edwin B. Forsythe (formerly Brigantine) National Wildlife Refuge in New Jersey, I had ample opportunity to photograph these graceful terns. Many were present, and I came across a feeding hotspot with numerous birds diving for fish. 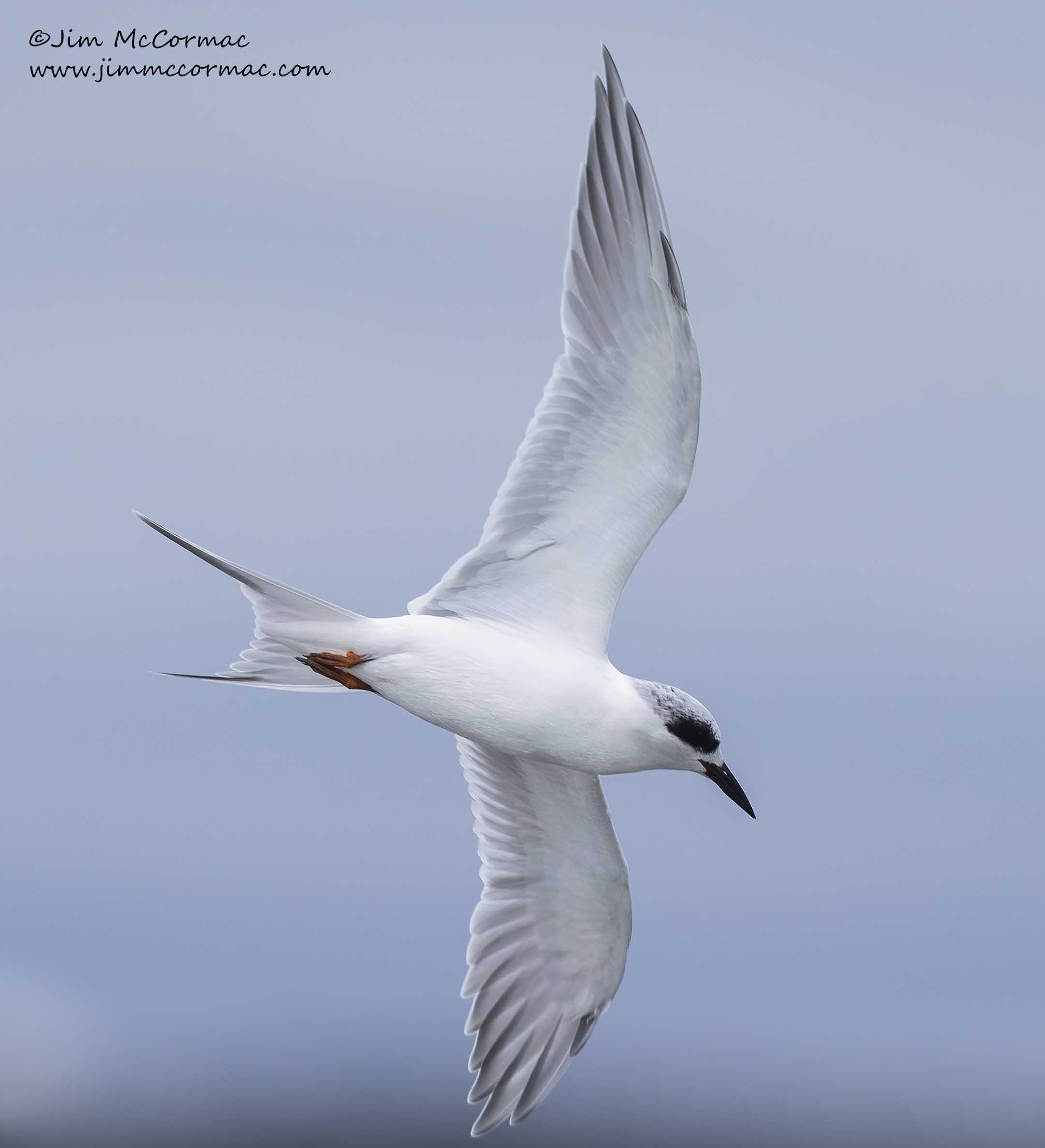 This tern’s head is canted downward, searching the waters 20 feet below for small fish. When prey is spotted, it will react instantaneously, plummeting to the surface and seizing the victim (although they do often miss – this is not an easy business).

Forster’s Tern is named for accomplished 18th century naturalist Johann Reinhold Forster. The irascible Scot was the first to describe the details of this species, although at the time he thought it was a subspecies of the Common Tern (Sterna hirundo). 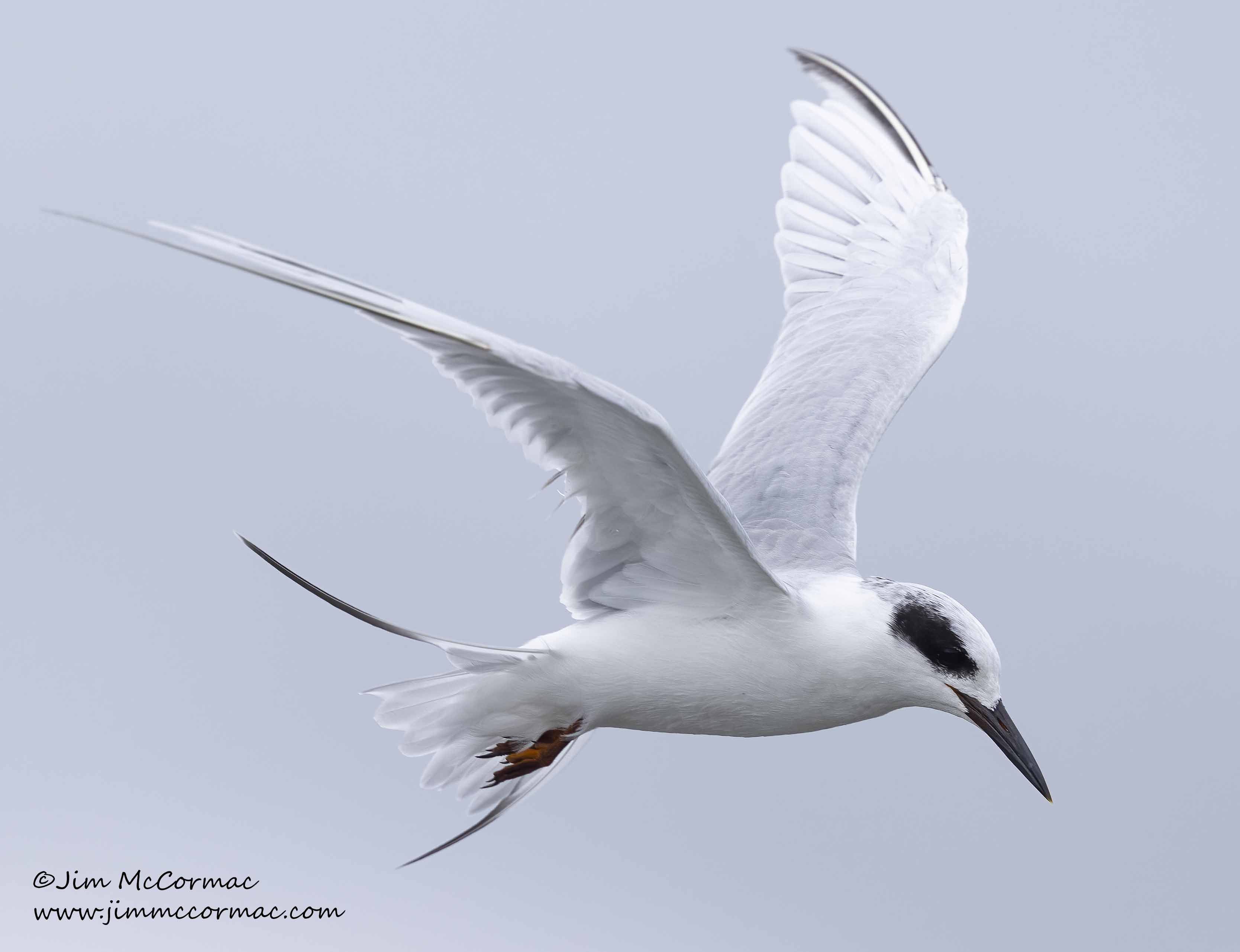 An observer cannot help to notice the rapidity with which terns swallow their prey. Usually they’ve got the fish down the hatch within seconds of capturing it. There is good reason for their speediness: kleptoparasitism. Many gulls are generally lurking nearby, awaiting an opportunity to force a hard-working tern to drop its fish, which the gull will quickly grab. Such avian piracy forces the tern to not tarry with its meal. In this photo a Laughing Gull [Leucophaeus atricilla] harries a tern that for whatever reason did not quickly down its fish. In this case, the tern did manage to wolf down the scaly treat before the gull won out. 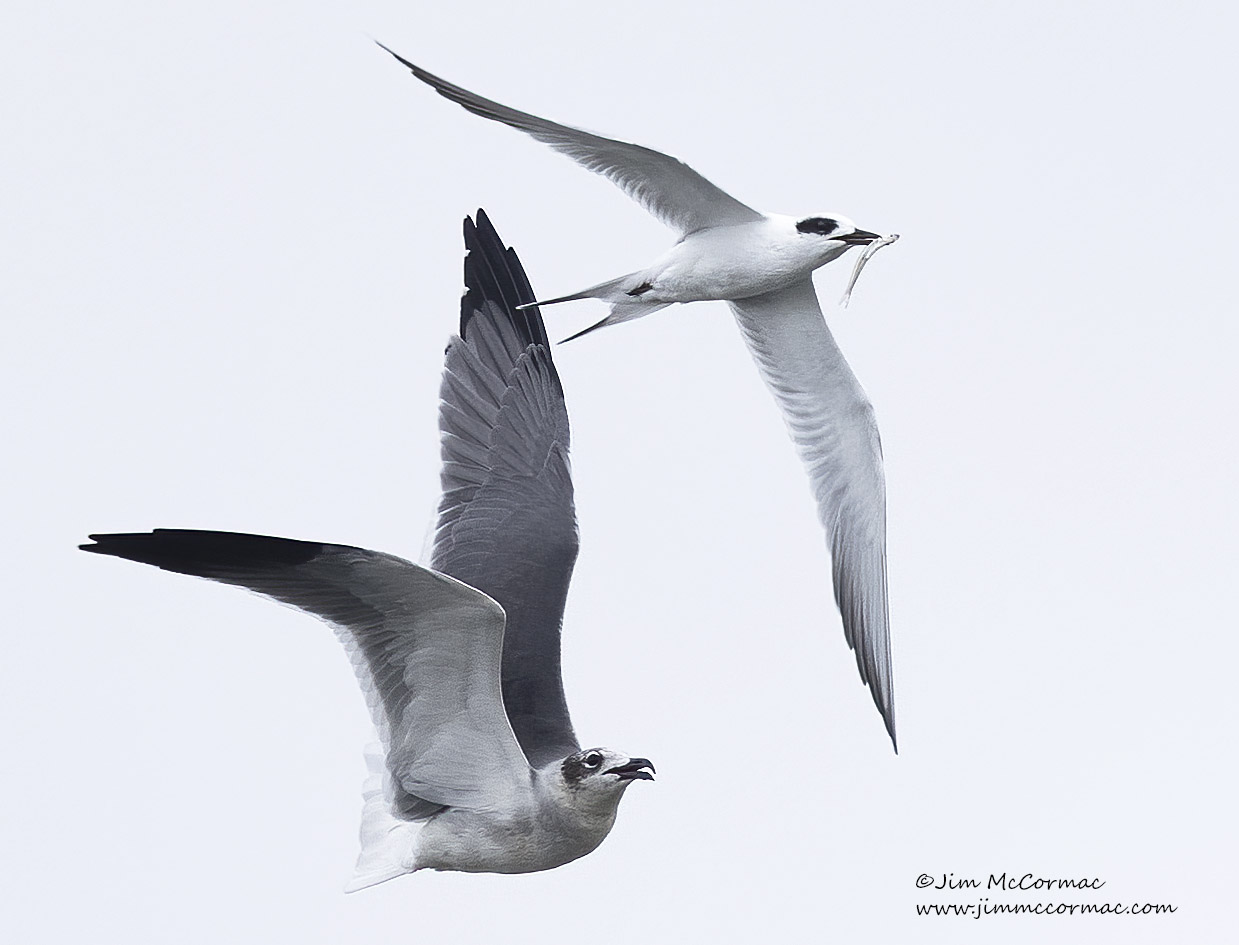 Back to stub-bill from the first photo. One might think that its truncated lower mandible would adversely affect its fishing prowess, but I saw no sign of handicaps. It caught a number of fish while I was there, and I managed to photograph one of those occasions. Animals are often extraordinarily resilient in overcoming disabilities, and this bird will hopefully live a long productive life (the oldest known Forster’s Tern was 12 years of age). 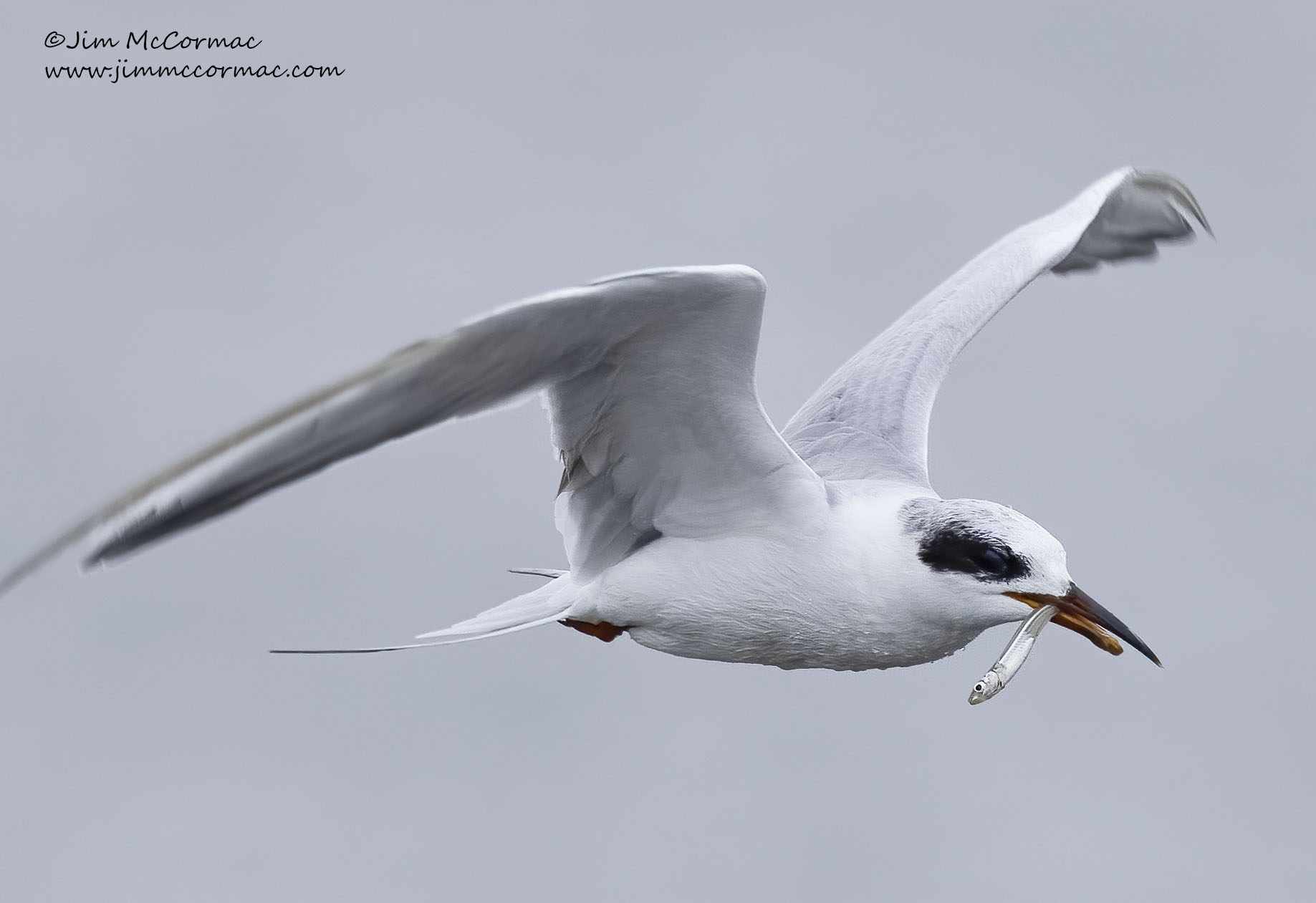