This book, by Ben Schreckinger, a young but accomplished journalist who wrote about the Bidens for Politico (see here, for instance), came out on September 21. I haven’t read it, but the publicity says it gives the lowdown on the Biden family—and not in a flattering way.  (click on screenshot to go to Amazon site). This post is about an article Matt Taibbi wrote, summarizing the book, which implicates the whole family in pay-for-access-to-Joe schemes. 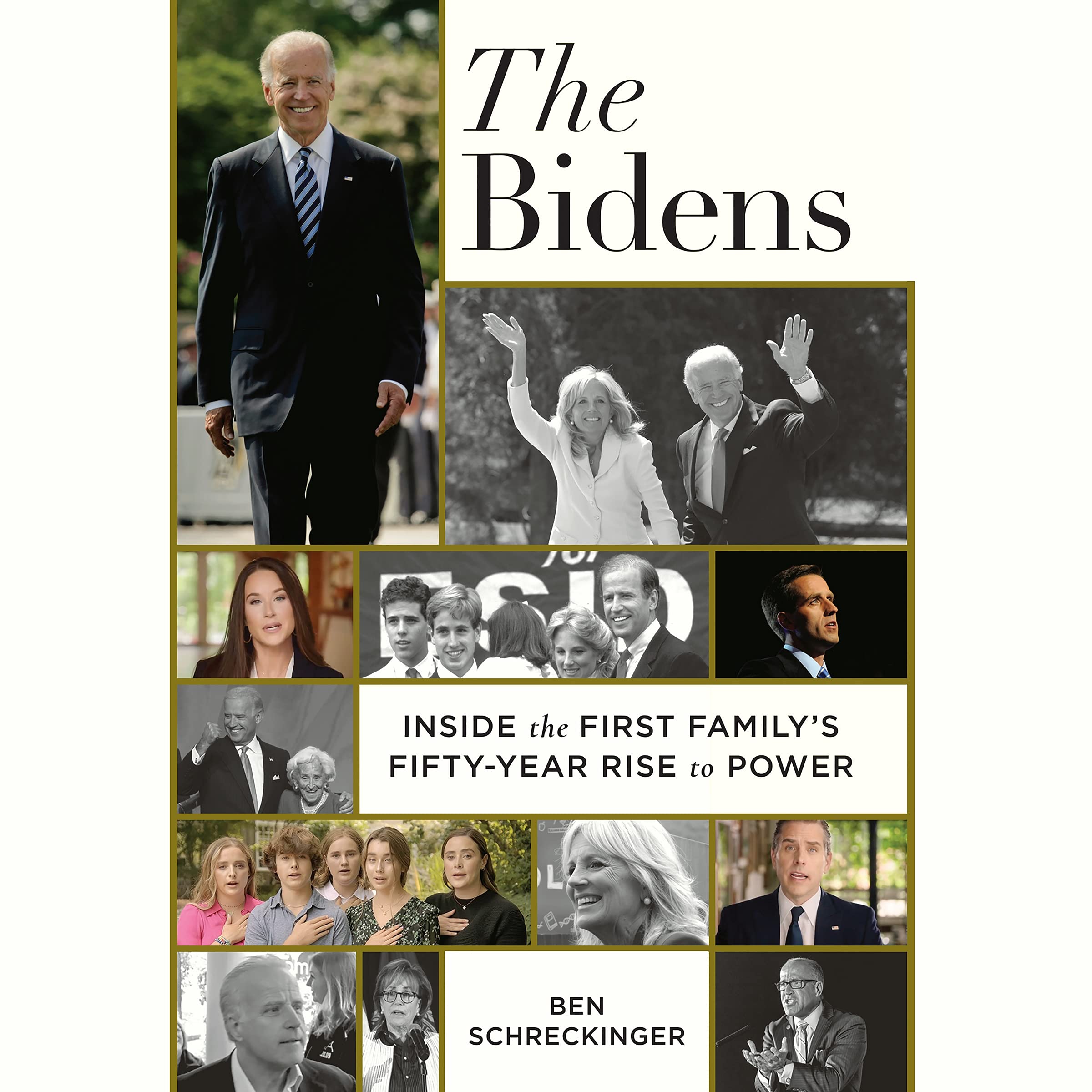 Taibbi’s take is summarized in a long post on his Substack site (click below, though you’ll have to be a subscriber). In essence, Taibbi’s account is mostly a description of Hunter Biden and his doings, and it’s not flattering. Hunter is painted repeatedly as a cocaine-addicted, money-grubbing, unethical hack, who tried to cobble together numerous deals and organizations from which people could buy access to Biden when he was Vice-President. As I say, I haven’t read it and can’t vouch for its accuracy, but Schreckinger does.

I am not that interested in Hunter Biden, who will have to bear the consequences of his own actions. What interests me is the involvement of his father Joe, whom I’ve always considered uncorruptable and spotless. Taibbi claims (or at least implies) otherwise. After all, the man is our President, and so if he’s had shady dealings in the past, we’ll want to know. I don’t know how you can read the whole piece if you don’t subscribe, but you can read the book, or make judicious inquiries about Taibbi’s piece.

I’ll just give a few quotes (indented) that bear on Uncle Joe.

Taibbi claims that As he says, Schreckinger doesn’t seem to have a political agenda, but is trying to give a current view of history, which may well look even worse in the future.

Most of Taibbi’s article centers not just on Hunter Biden’s search for “access money” from donors, but his own spectacularly messed-up life. As Taibbi says, “he’s not just a wreck, but a wreck with spectacularly bad luck.” There are drugs, guns, failed attempts at rehab, and, of course the fabled laptop with emails.  So here are a few quotes from Taibbi (and there are only a few) dealing with Joe Biden.

According to literary convention, the gun must go off by the final chapter of The Bidens, and it does. As Schreckinger goes on to detail, the Hunter story isn’t an irrelevant subplot, either, but central to an important and deeply disturbing question America should be asking about who Joe Biden is.

Schreckinger does an excellent job using the old show-don’t-tell method of revealing through the Biden tale the bipartisan nature of corruption and favoritism in America.

Yes, and it sure looks as if Hunter Biden was corrupt. But what about his dad?

More from Hunter and James:

Schreckinger quotes a former chief compliance officer for the firm, which had been sold to the Bidens by James Park, who naturally is the son of a former bigwig in the Unification Church of billionaire Sun Myung Moon. The officer recounts a day in 2006 when Jim and Hunter Biden showed up and began beating their chests about the future:

Jim had a plan. “Don’t worry about investors,” he told the executive that day. “We’ve got people all around the world who want to invest in Joe Biden.” In case the chief compliance officer did not get the picture, Jim painted it more vividly for him: “We’ve got investors lined up in a line of 747s filled with cash ready to invest in this company.”

But wait, the not-yet-smoking gun has appeared:

They, too, were hit by the Biden Curse, an inerrant phenomenon that uses a gravity-like force to pull would-be Biden partners into federal custody.

The thing about this kind of business, however, is that it’s highly portable, and following the trail of the various efforts to open a cash register in front of Joe Biden’s political career is where Schreckinger does his best work. The Bidens earned early press mainly for a few passages about the Hunter Biden laptop story, but for my money its biggest score comes at the outset of a chapter called “The Bidens Go Global,” describing a scene involving another attempted family enterprise, a hedge fund called “Paradigm Global Advisors.”

According to Schreckinger interpreted through Taibbi (I have to say that Taibbi’s semi-sarcastic, almost gonzo-like account is quite readable), Biden was in Los Angeles to give a speech about his cancer initiative, and the night before met with Hunt, Joe’s brother Jim and a shady businessman.  Here’s what Taibbi says, quoting Schrekinger:

Hunter at one point was trying to make payments on a $1.6 million home and fighting one of the most ravenous addictions in the history of crack while his father was Vice President, which admittedly can’t be easy. (Again, Schreckinger manages to tell Hunter Biden’s story in way that’s remorseless while also eliciting a curious sympathy). Where it gets weird is the question of how all of this intersects with Joe Biden. In a key section of the book, Schreckinger details the flirtation between the Bidens and a Chinese businessman named Ye Jianming and his CEFC oil conglomerate. Joe Biden is in Los Angeles to give a speech about his cancer initiative to the Milken conference, the creation of sort-of-rehabilitated Mike Milken:

The night before his appearance, Joe met with Hunter, Jim, and Tony Bobulinski, another partner in [a] planned LNG venture, according to Bobulinksi, who said that in the course of their conversation, Joe showed familiarity with his relatives’ business plans…

On May 13, another partner in the venture emailed Hunter, Bobulinski, and a fourth partner, outlining their plans for compensation. The partner wrote of “a provisional agreement that the equity will be distributed as follows.” The breakdown indicated that “H” and the three other partners would get 20 percent each, along with 10 for “Jim” and, finally, “10 held by H for the big guy?”

The “Big Guy” is Joe Biden, who, with his apparent knowledge, was going to get 10% of the access money (this comes from a verified email from Hunter’s infamous laptop ).  The media dismissed these stories as Russian disinformation, but have now accepted that the emails are real. To his credit, Schreckinger admits he doesn’t have all the goods on Joe Biden, but things don’t look kosher, either:

Schreckinger doesn’t try to punch above his evidence, and concedes in multiple places that he hasn’t produced smoking-gun evidence tying “the big guy” to Hunter’s myriad cash flows. However, he’s also sensitive enough to the weird rhythms of the Biden family to grasp that the overall circumstantial picture is damning.

In particular, Biden’s insistence that “I have never discussed, with my son or my brother or with anyone else, anything having to do with their businesses,” is simply not believable after reading this book, not just because there is witness and documentary evidence directly contradicting him, but because the family does appear to be just as close as it claims. The fact that Biden participated, and continues to participate, in a shameless scheme to deflect attention and squelch inquiry by characterizing these true stories as Russian disinformation adds to the pile of evidence against him.

At minimum, Jim and Hunter Biden spent years setting up companies to be receptacles of “747s filled with cash” (a quote from people around the world they believed would be anxious to invest in the Biden name. The possibilities from there for Joe Biden range from merely dishonest acceptance of his family’s influence-peddling to things far worse. In a normal media environment, there would be dozens of journalists lining up to build on Schreckinger’s good start, to try to flesh out the part of this story that’s still lost in fog. However, there’s a cost of writing this sort of book now that comes in the form of not being invited to the usual Manhattan green-room publicity tour, and being frozen out of other opportunities. Will other reporters be willing to pay it?

Is it possible that there were donors lined up, and Biden knew about them? (These kind of donations are of course illegal.)

At the end, Taibbi interviews Schreckinger and asks him about the cash-filled 747 trope:

Matt Taibbi: How long did the book take to write, and what were you trying to accomplish?

Ben Schreckinger: As I put in the Author’s Note, this is not the end of the Biden story. This is not the Robert Caro treatment of Lyndon Baines Johnson. A lot of these episodes are ambiguous, there’s conflicting evidence. I’m expecting our understanding of a lot of these episodes, especially the more recent ones having to do with Hunter Biden to continue to evolve. That’s definitely a tricky and a treacherous thing to be doing, trying to write a book-length treatment of something as events are still unfolding. I wanted it to come out in a timely way, and I think that it has.

MT: The “747s full of cash” line is amazing. What was going through your head during that interview?

Ben Schreckinger: In the process of reporting out the Paradigm episode for the first time, for that first Politico story, one of the first people I was able to reach was an executive, the former chief compliance officer of the firm who’s cited at length. He said, “You know, yeah, Jimmy Biden showed up on the first day and said, ‘Don’t worry about investments. We got people around the world who want to put money behind Joe Biden.’” Joe Biden was then the ranking member on Senate Foreign Relations and the idea was, well, if you’re a deep-pocketed foreign interest, you can’t give money legally to a Joe Biden Senate or presidential campaign, but you could invest in this firm.

By all appearances, that didn’t end up working out. They don’t seem to actually succeed in landing these sorts of investments, but that was striking. To not have a deep understanding of the family’s business dealings and for one of the first people you reach to be an executive who says, “Oh yeah, this is what happened. This is what Jimmy Biden said on the first day.” It was like, wow.

Is this a tempest in a teapot, an innuendo against Joe Biden without reality? Or was he aware of the deals being cut on his behalf?  Schreckinger certainly thinks that, and I suppose time will tell. Certainly Biden’s son and brother appear complicit and crooked, and will likely face the music, especially with those confirmed emails.

As for Uncle Joe, we’ll just have to wait and see. For sure I’m not implying that Joe Biden is an influence-peddler. (Remember, after voting for Sanders in the primary I backed Biden all the way, and have been a fan since). But Taibbi and Schreckinger are implying that, and it shouldn’t be ignored.

41 thoughts on “Matt Taibbi on the nefarious, acquisitive Bidens”