A reader sent me a link to John McWhorter’s latest post at the New York Times, which activated an idea I’ve been mulling over for some time. The email with the link:

I guess we’re only going to get mostly fluff from McWhorter while he’s with the NY Times. I’ll admit that I only skimmed this quickly so if I missed something important, perhaps you’ll tell us in WEIT. 😉

Here’s the piece, and I can’t decide for myself whether John McWhorter is losing his hard edge now that he’s with the NYT. I worried about this when he left Substack, but I didn’t mind his move to the NYT, as who could turn down the opportunity to write twice weekly for them (no doubt for substantial emoluments), not to mention the bigger audience and publicity. No, I was worried that his honest contrarianism on issues of race would turn milder. After all, no white man could get away with what McWhorter has been saying regularly on his Substack column, and I wondered if the Times would even let McWhorter, a black man, be so honest.

I was reassured when he came out with a fantastic column on the crazy rock kerfuffle at the University of Wisconsin, which involved moving a huge boulder out of sight since it had been given the term “n******head rock only once by a local newspaper—in 1925. McWhorter pulled no punches calling out the performative wokeness and faux offense of the University’s student and the cowardice of its administration. Click to read that one:

Never have I seen such a hard-nosed (and truthful) indictment of performative outrage in the NYT, and I cheered.

But since then, we’ve gotten nothing so hard nosed, and I’m wondering if McWhorter has been given the word to go a bit easier (I doubt he’d even accept such criticism) or, more likely, decided to soften his tone for the general public. After all, a column like the one above doesn’t resonate with most NYT readers, editors, or writers.

So I read the column the reader sent me, and while it is somewhat fluffy, I can’t yet decided whether McWhorter, whom I much admire, is getting softer. Click to read: 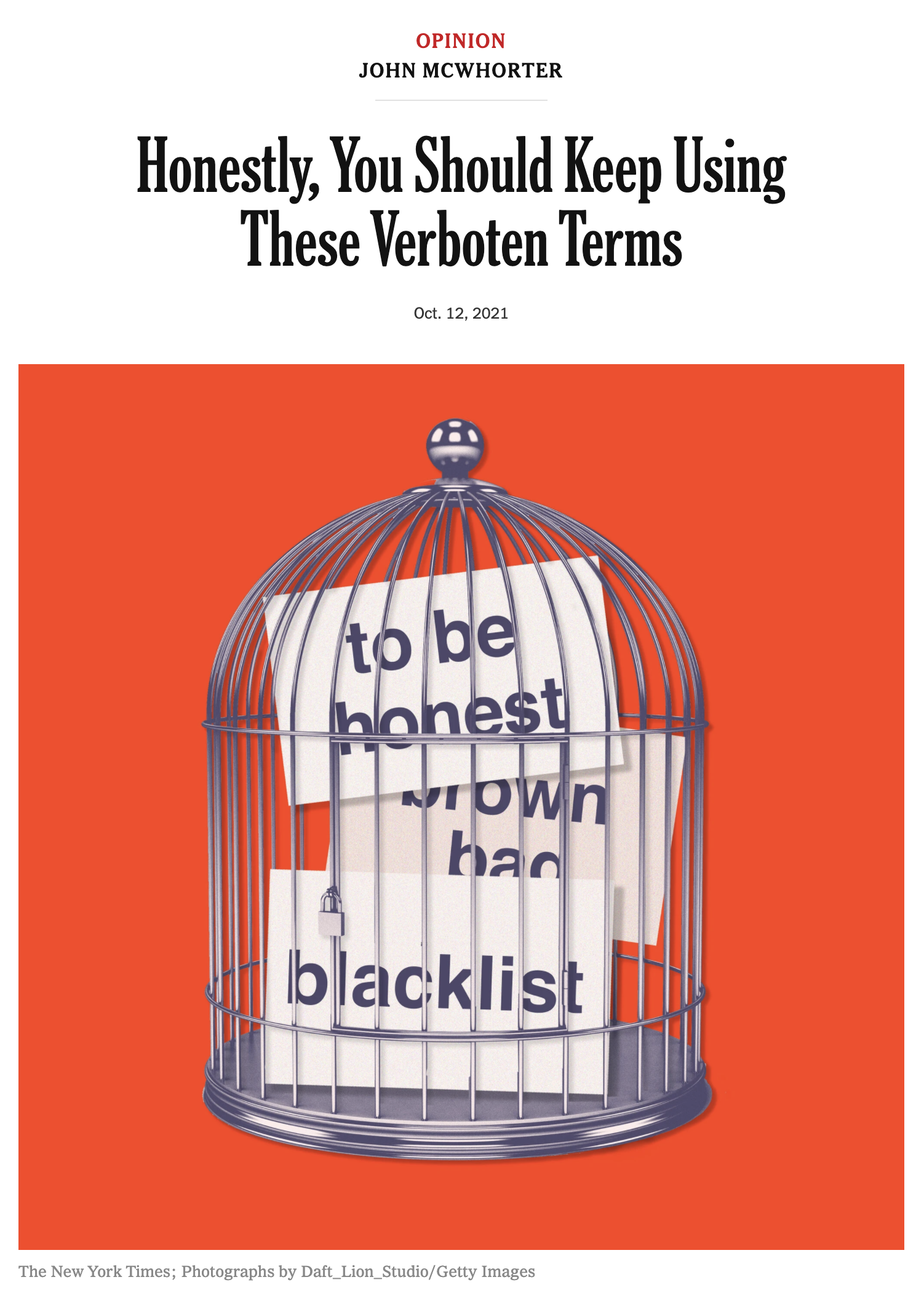 Half of the column is devoted to discussing phrases that are used for social communication rather than for truth value (“to be honest,” which implies that the speaker sometimes isn’t; and “nice shirt” compliment when you don’t mean it). It’s okay stuff, but I myself have written about “to be honest’ in my “words and phrases I detest” feature, and I’d like to think that McWhorter is less fluffy than I.

The rest of his piece improves as it segues into a notice that tomorrow evening he’s holding a virtual event, “Woke Words”, for NYT subscribers. He follows that with a discussion of which words and phrases are verboten and which (in his view) are okay to keep using. An excerpt:

We’ll talk about this sort of quandary [the “to be honest” usage] in “Woke Words,” my New York Times Q. and A. this Thursday, and the conversation will surely get spicier when we go into more societally loaded questions, including some you’ve submitted in advance: One person reports being told that we are no longer to say “brown bag lunch” because the phrase evokes the crude color scale that some elite (and elitist) African American organizations are said to have used, once upon a time, to determine eligibility for membership, with only people lighter in complexion than a brown bag admitted.

On this one I must admit a certain skepticism (not of intra-Black colorism — that’s quite real) that “brown bag lunch” should be implicated, for the reason of the antiquity. How many people today know what the brown bag test was, and more to the point, need we proscribe words and expressions to symbolically exorcise a practice that no longer exists?

If we do, then by the same logic, we should no longer refer to whipped cream, since enslaved people were whipped, or shucking corn, because the phrase “shucking and jiving” refers to Black people faking glee to placate white people. If those hypotheticals seem to be pushing it, I’m not sure how “brown bag” is different.

More readily understandable is the pox on “retarded”; associations with the word became so noxious (in my youth it was, sadly, regularly used as a slur) that the impulse to replace it with other terms was natural. But the change to terms like “intellectually disabled” exemplifies the euphemism treadmill I referred to in an earlier piece: “Crippled” becomes “handicapped” becomes “differently abled,” and each new term tends to take on the old connotations. At one point, at least some developmentally disabled people were described as having “special needs” but, plus ça change, “special” also gets leveled as a slur in certain malicious contexts.

Then I’ve also seen calls to get rid of expressions in which the word “black” denotes anything sinister: No more “blacklist,” despite that it did not emerge with a meaning related to Black people.

So here he’s combined his academic field of linguistics with his take on race, and worrying about “mission creep” as innocuous phrases undergo “mission creep” into things supposed to cause harm. That’s something we discuss a lot around here, but again, it’s not new with McWhorter.

But the column’s still worth reading. He’s been alternating columns about race with ones about linguistics, and I have to say that I find the former far more thought-provoking. (Many readers, on the other hand, probably come for the linguistics.) After all, right now America is obsessed not with linguistics but with race, and McWhorter’s point of view, similar to that of his Bloggingheads colleague Glenn Loury, is unique among black liberals.

No, I don’t think the man has sold his soul to the NYT, but remember: this is the paper whose editor, after he dumped science writer Don McNeil Jr. for using the n-word in a didactic way (on a NYT tour, not in the paper), claimed that the intent of using such a word didn’t matter; all that mattered was its effect on the listener. Editor Dean Baquet even ditched a column by Bret Stephens pushing back against the “intent doesn’t matter” trope.  And that gives me a suggestion for another column by McWhorter that combines linguistics and wokeness: “Does intent matter?”

19 thoughts on “Is the NYT defanging John McWhorter?”