Most of you know about Texas’s restrictive new abortion law, which bans all abortions after a fetal heartbeat is detected—about six weeks into pregnancy. Past that point, abortions are not allowed even in cases of rape or incest.

To add insult to injury (seriously: you have to carry a rapist’s or relative’s baby to term?), the Texas legislature allowed regular citizens to enforce the law, making it harder to declare it unconstitutional (even though it is). Everyone is “deputized” to enforce the law, allowing citizens to sue anybody who aids in an “illegal abortion” (including the Uber driver taking the woman to a clinic) for $10,000.  Finally, the provision makes the law retroactive even if it is blocked, so if it’s “paused,” as it was for a few days this week, legal abortions conducted during that pause can be considered illegal after the law kicks in again, and the providers sued. It’s nefarious, and designed to make it hard to legally block the law.

Nevertheless, after a request from Biden’s Justice Department, the law was blocked on Wednesday by federal judge Robert Pitman, who didn’t pull any punches in his 113-page decision.

“From the moment S.B. 8 went into effect, women have been unlawfully prevented from exercising control over their own lives in ways that are protected by the Constitution,” he wrote in his opinion.

“This court will not sanction one more day of this offensive deprivation of such an important right,” he added.

Well, the exercise of that right lasted just two days. A three judge panel in the conservative Fifth Circuit of Texas ruled that Texas’s law would take effect again, although temporarily. Previously illegal abortions started up again (even though clinics could be sued later), but most clinics suspended activity. The panel gave the Justice Department until 5 p.m. Tuesday to respond to Texas’s appeal, but the unanimity and terseness of the ruling suggests that the Firth Circuit will permanently reinstate the law some time after Tuesday. You can see the two-page ruling here, but here’s the gist: 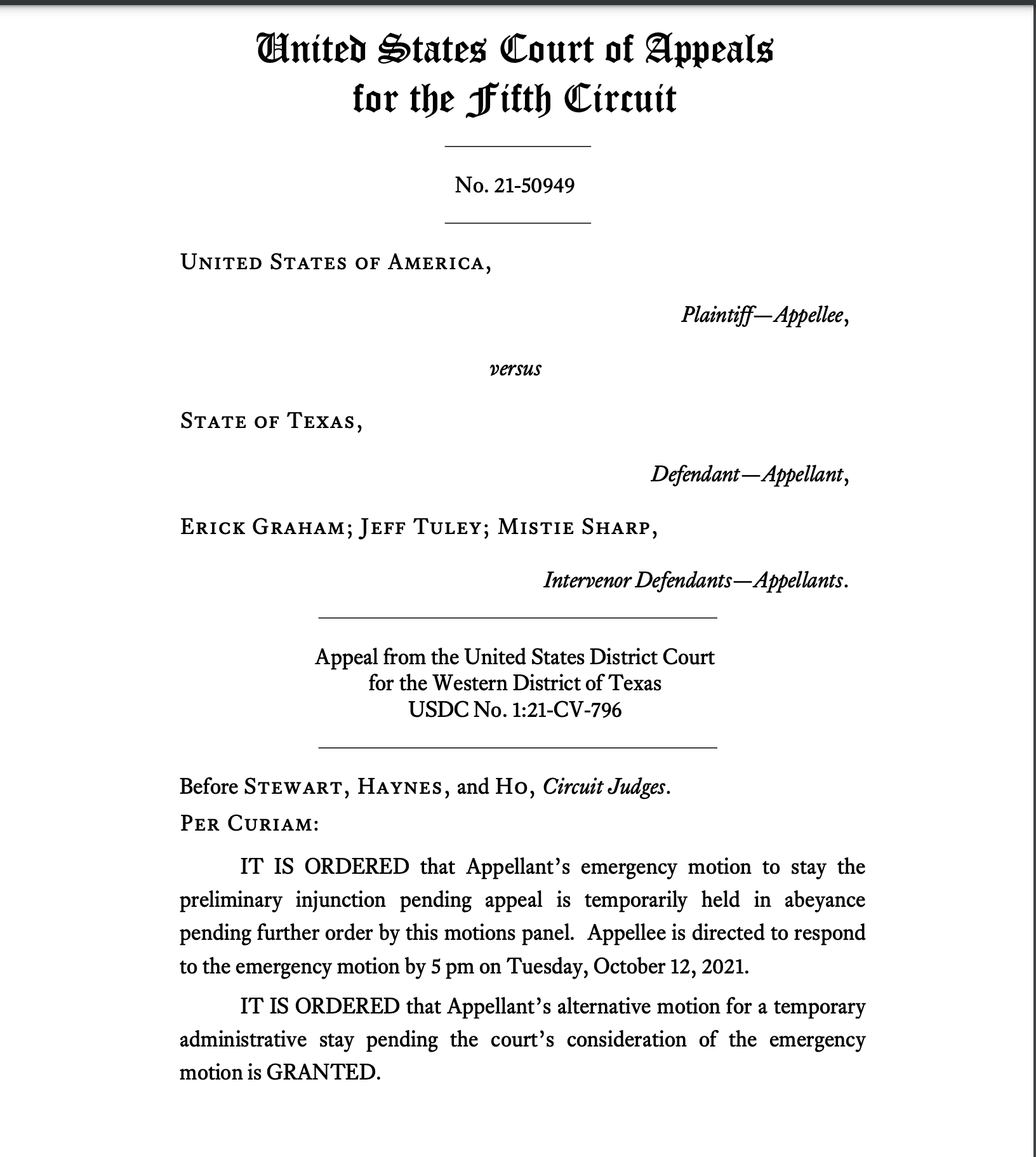 As you know, the U.S. Supreme Court refused to intervene before the law went into effect, a decision that baffles me because, according to present law, Texas’s law was palpably unconstitutional. That may changes as they move toward overturning Roe v. Wade, which I once thought unlikely but now think probable. So, as of now, the women of Texas are forced to obey an unconstitutional law, seeking abortions in other states if they’re past the sixth week of pregnancy.

A quote from the NYT piece:

“The Supreme Court needs to step in and stop this madness,” Nancy Northup, president and chief executive of the Center for Reproductive Rights, said in a statement. “It’s unconscionable that the Fifth Circuit stayed such a well-reasoned decision that allowed constitutionally protected services to return in Texas.”

But the Supremes have already refused to step in, and, in an upcoming Mississippi case about a similar law, may step in in a way we don’t like.