The University of St Andrews loves Big Brother, for the school is enforcing an invidious form of mind control on entering students. You have to take a “bias test”, and if you don’t conform by answering questions correctly in a test of Wokeness, you don’t get to take classes. Read on.

I got two tweets this morning (below) about what’s going on at the school in the eponymous and historic Scottish town. The first tweet showed a woke phrase underlined, while the second gives most of the full article, which came from The Times of London (it’s paywalled for me, but the link is at the screenshot below.) You can also find the story at GB News or The Daily Fail, which don’t add much information. But good luck trying to find it at the Guardian!

At any rate, you can read most of the story from The Times at the enlarged photo below (click on it twice to read) or a shorter version at The Fail. 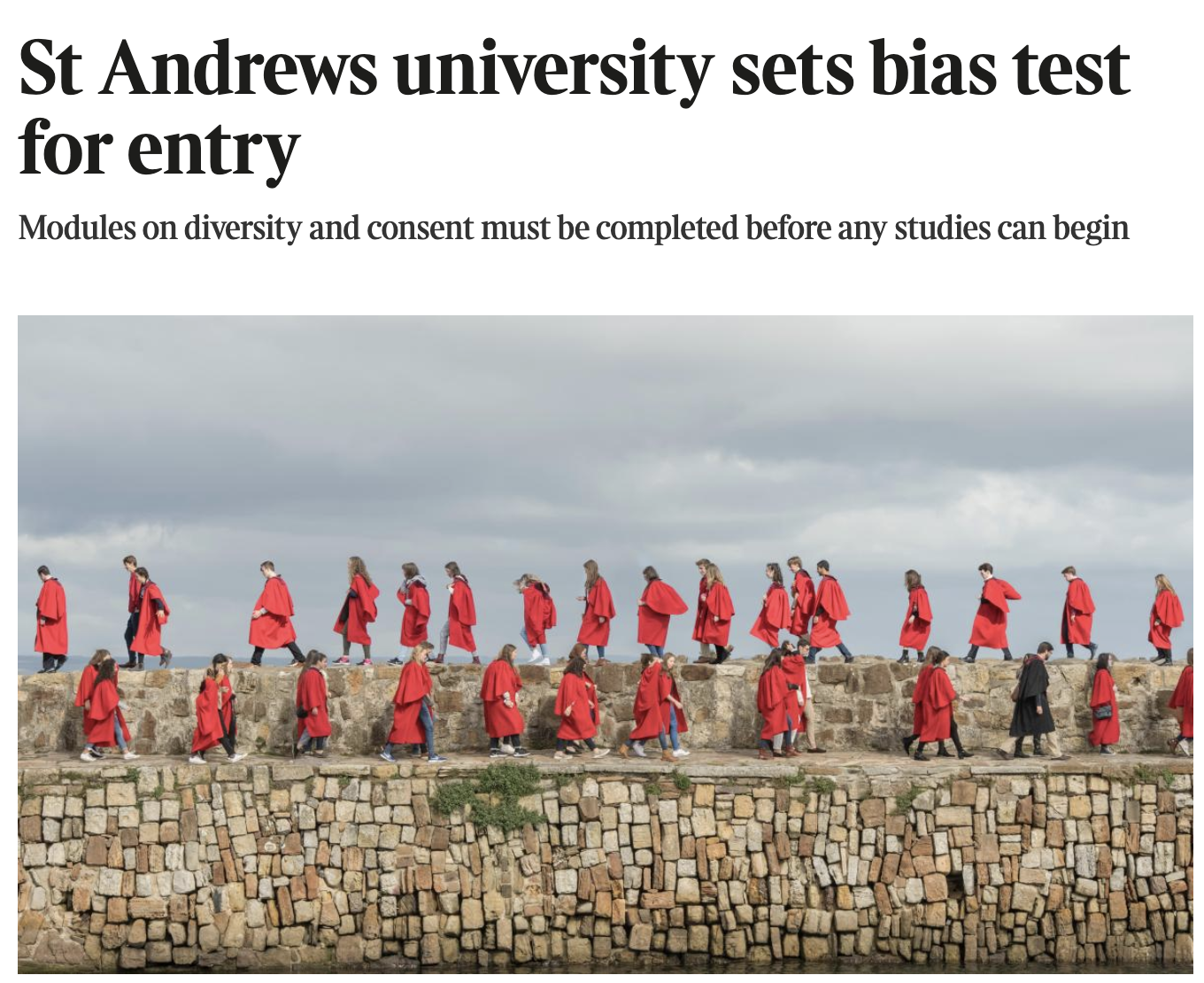 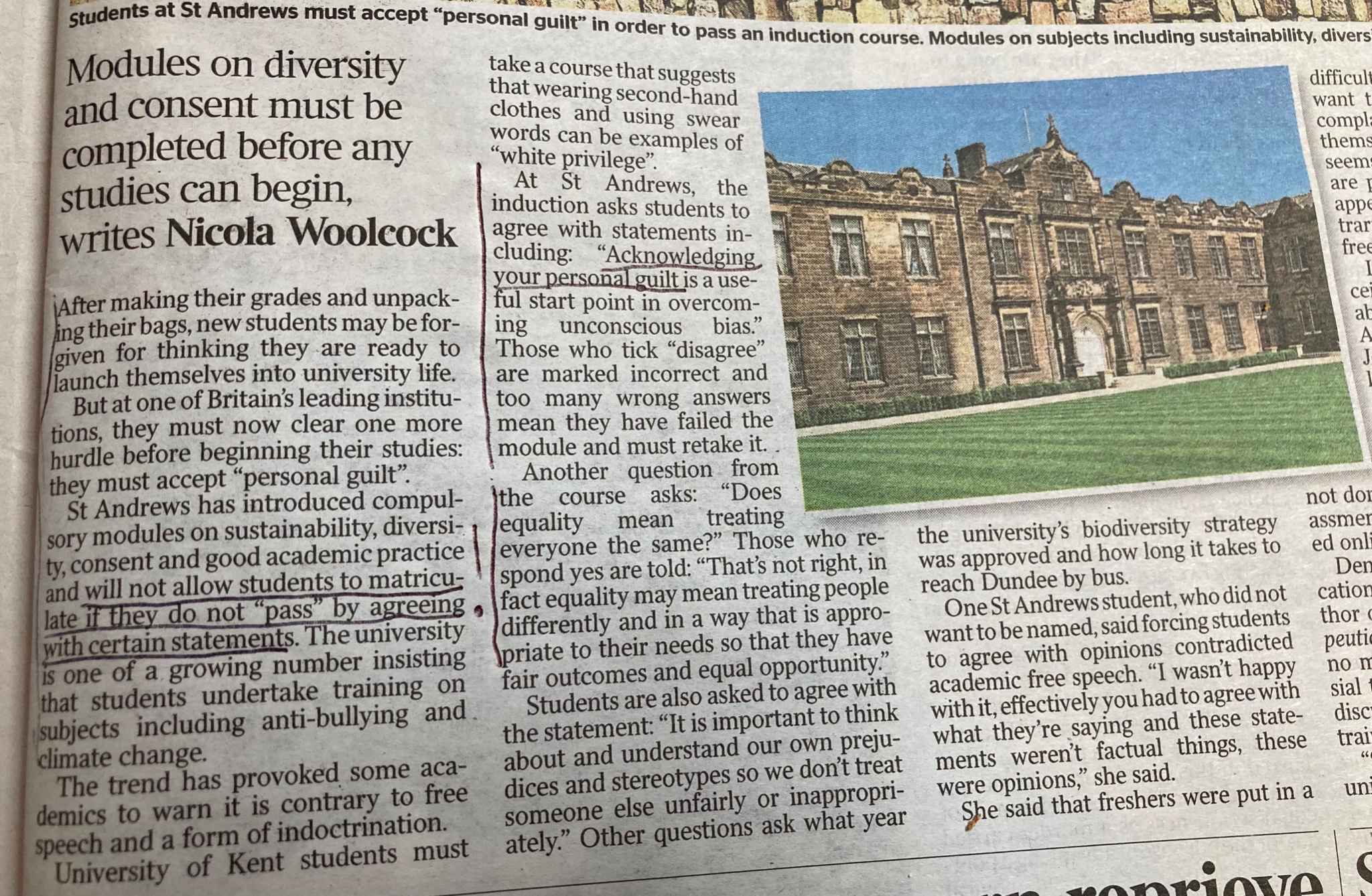 The Fail finishes the student’s quote:

One student blasted the move, saying it forces them to agree with claims that contradict academic free speech.

She told the Times: ‘I wasn’t happy with it, effectively you had to agree with what they’re saying and these statements weren’t factual things, these were opinions.’

She said it was putting freshers between a rock and a hard place because they did not want to start at the university by complaining.

She added: ‘It seems like they [the university] are pushing an agenda and it appears performative and contrary to academic freedom and freedom of thought.’

I’ll assume that the questions asked of the students are true, although The Fail says that the Uni says the Times report is “inaccurate and misleading”. But the content seems to be correct. Here’s what the Fail says about the University’s response.

A spokesmen for St Andrews University said: ‘The Times report is inaccurate and misleading. These modules have been in place at St Andrews for several years.

‘With exception of the good academic practice training, all of these modules were introduced at St Andrews in response to clearly expressed student demand.

‘Our students pushed for the mandatory consent module, wrote the sustainability module, and were central members of the EDI (equality, diversity and inclusion) group which brought in the mandatory diversity module.

‘The modules were developed to align with St Andrews’ strategic priorities (diversity, inclusion, social responsibility, good academic practice, and zero tolerance for GBV) and help develop skills and awareness valuable to life at university, and beyond.

‘In our experience, students recognise the value of these courses, and we have encountered only one complainer in the past five years.’

Note there is no denial by the University of the content of the modules as reported by the Times.

Of course the issue here is not student pushback (what student would object to this?; most are probably self-censoring), and one beefing student may not express general sentiment. Nor is the issue who designed the modules, for in Nineteen Eighty-Four the populace is enlisted in its own oppression.

The issue is freedom of speech and thought, and that is what these modules are squelching. They are enforcing a conformity of thought to which you must adhere before you can even start your studies! You can see what the students are supposed to think: they must acknowledge their “guilt” (inquiries suggest this is “white guilt”). As for “we should treat everyone the same”, in some respect that is true—for moral equality and, with respect to civility, in personal interactions.. But every professor knows that students are unequal in their abilities and some may need extra tutoring or office hours. No professor (this test is for students only) would say that “all students should be treated equally,” as that doesn’t even ensure equality of opportunity. You can see how a question like this is ambiguous and could confuse the students.

And you have to agree with the notion that everyone has (unconscious?) biases and stereotypes.  I have no idea what the Dundee and biodiversity questions are about.

Regardless of this parsing, though, having this test administered before starting school, being required to pass it and mouth certain answers, is St Andrews forcing ideology down the throats of its students. The quoted student is much wiser than the University when she says, “It seems like they [the university] are pushing an agenda and it appears performative and contrary to academic freedom and freedom of thought.”

She’s wrong only when saying “it seems like”. No, that is exactly what they are doing.  As you see, the creeping rot is on both sides of the Atlantic.