It’s that time of year when the Alaska peninsular brown bears (Ursus arctos), a population of the grizzly bear, are fattening themselves up on spawning salmon to lay on the fat for winter hibernation. As Wikipedia explains:

Brown bears on the Alaska Peninsula usually feed on spawning salmon, and use many different ways to catch them. These include waiting at the bottom of the falls for the fish to jump, or standing at the top of the falls waiting to catch the fish in midair (sometimes in their mouths). Bears also have much experience at chasing fish around and pinning the slippery animals with their claws. After the salmon runs, berries and grass make the mainstay of the bears’ diets, after which they put on sufficient fat reserves and go into hibernation

You can see them hunting on this live bear cam at the classic site of Brooks Falls in Katmai National Park in Alaska. Someday I will go there to see this amazing spectacle for myself!

It starts tomorrow and extends through October 5. The goal is to choose the bear who has gotten the fattest on salmon, and you do this by voting for one bear out of each pair per day. You vote for the fatter one, and that’s put up against another porker on the next day. At the end of the week, the Fattest Bear is crowned. (And remember, the more fat, the more likely you are to get through hibernation in good condition, so FATNESS IS FITNESS!)

Go to the link [it will be the “vote” button on the page above], start voting tomorrow, and follow these instructions:

Download your blank bracket. Fat Bear Week is from September 29th to October 5th, your vote decides who is the fattest of the fat. Matchups will be open for voting between 12 – 9  p.m. Eastern (9 a.m. – 6 p.m. Pacific). Click the bear you would like to vote for. That bear will then be outlined in blue.  Then enter your email in the space and hit enter. You know that you have successfully voted if you see the total votes for each bear.

Click to enlarge and see the contenders. You can get more information at the “Meet the Bears” site here. There’s also a junior bear contest for the young ‘uns, but you can suss that out for yourself.  Remember: it’s Survival of the Fattest! Here are the brackets so far: 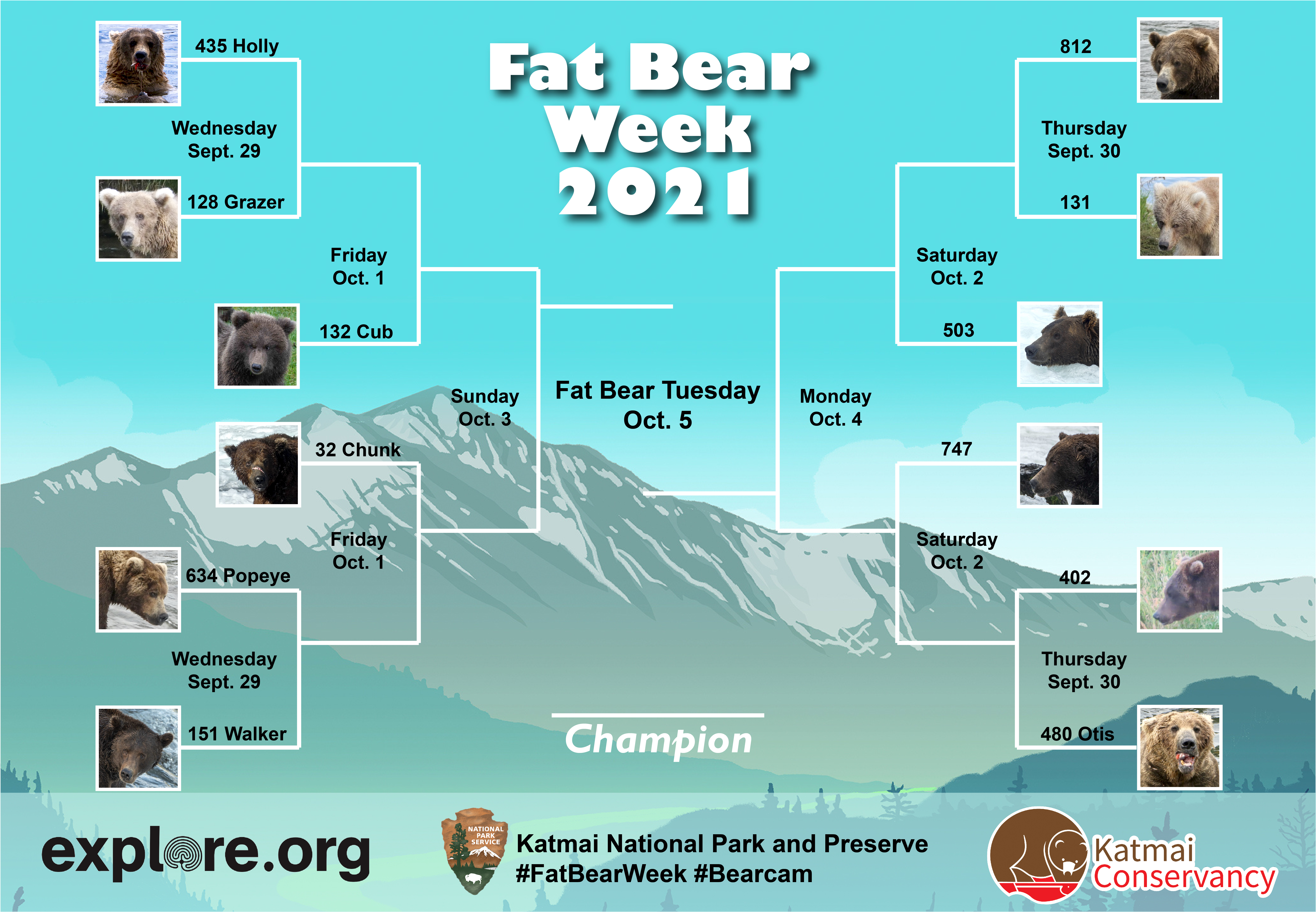 I’m partial to “Chunk”, as he looks as if he’s prone to getting in scraps. He’s HUGE!

Chunk (Bear 32) is a large adult male with narrowly-set eyes, a prominent brow ridge, and a distinctive scar across his muzzle. Even at his leanest, Chunk carries substantial fat reserves, especially on his hind quarters. In early summer he tends to shed much of the fur around his shoulders and neck. This gives him a two-toned appearance and exposes numerous scars and wounds. By late summer, his newly grown fur is dark brown.

Chunk was first identified in 2007 as an independent, chunky-looking two and half year-old bear. Since then, he’s grown to become one of the largest adults at Brooks River. He was estimated to weigh more than 1,200 pounds (544 kg) in September 2020.

Chunk ranks among the most dominant bears at Brooks River. This allows him greater access to mating opportunities and fishing spots. Like most large bears, Chunk is not hesitant to challenge and displace others from the resources he wants. However, his behavior can also be enigmatic. He may wait patiently to scavenge leftover salmon and even play with other bears. These are two uncommon behaviors for a dominant bear to display. Due to his size and strength, Chunk is poised to take advantage of opportunities not available to most other bears. Yet, it is only by observing his full range of behaviors that we can get a true sense of his individuality.

Look how fat he’s getting: 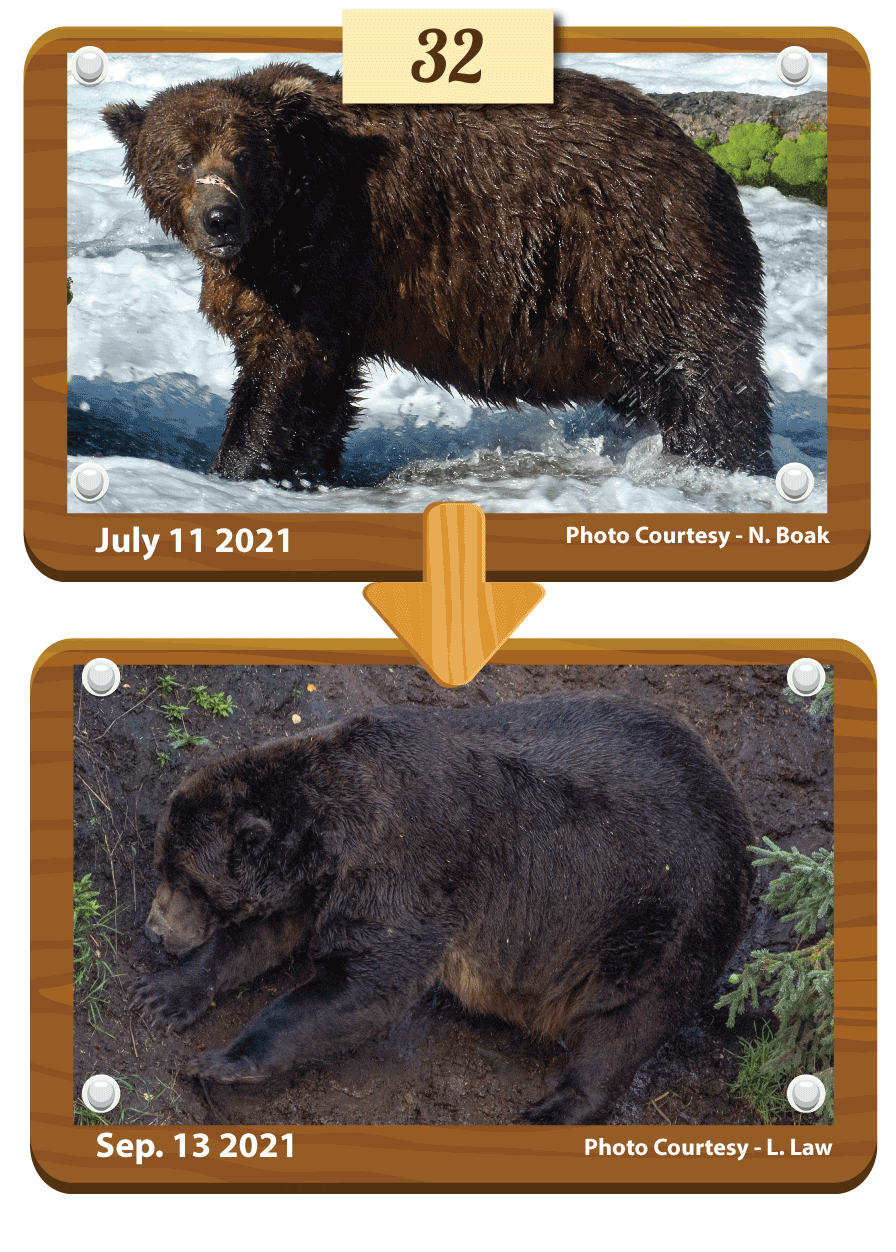 There’s a Hall of Champions of the Pudgiest Bears for each year since 2014. Meet last year’s champion, a male named “747”. Look at the belly on that porker! 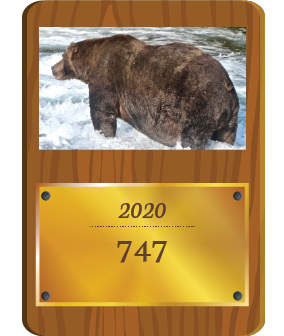 So start voting tomorrow (you must enter your email address). Good luck to all ursines, and may the fattest bear win. (They don’t weigh them; victory is determined by our looking at before and after pictures.)