I’ve been criticized for concentrating on “cancelling” by the Left and ignoring the same activities by the Right. If that’s true, it’s because I think the Left’s activities will help the Republicans in the next elections, while everybody in the liberal media concentrates on the Right. But it is true that we shouldn’t forget that the Right is guilty of some equally stupid attempts at censorship, several of them described in this article in The Daily Beast. Among the things that the Right-wing group “Moms for Liberty” are fighting to ban in schools are predictable ones: mentions of race, the struggle for civil rights, Native Americans, descriptions of segregation in schools, and so on.

But click on the screenshot below to read some new and unpredictable targets of Right-Wing opprobrium, including, for crying out loud, the reproduction of seahorses! 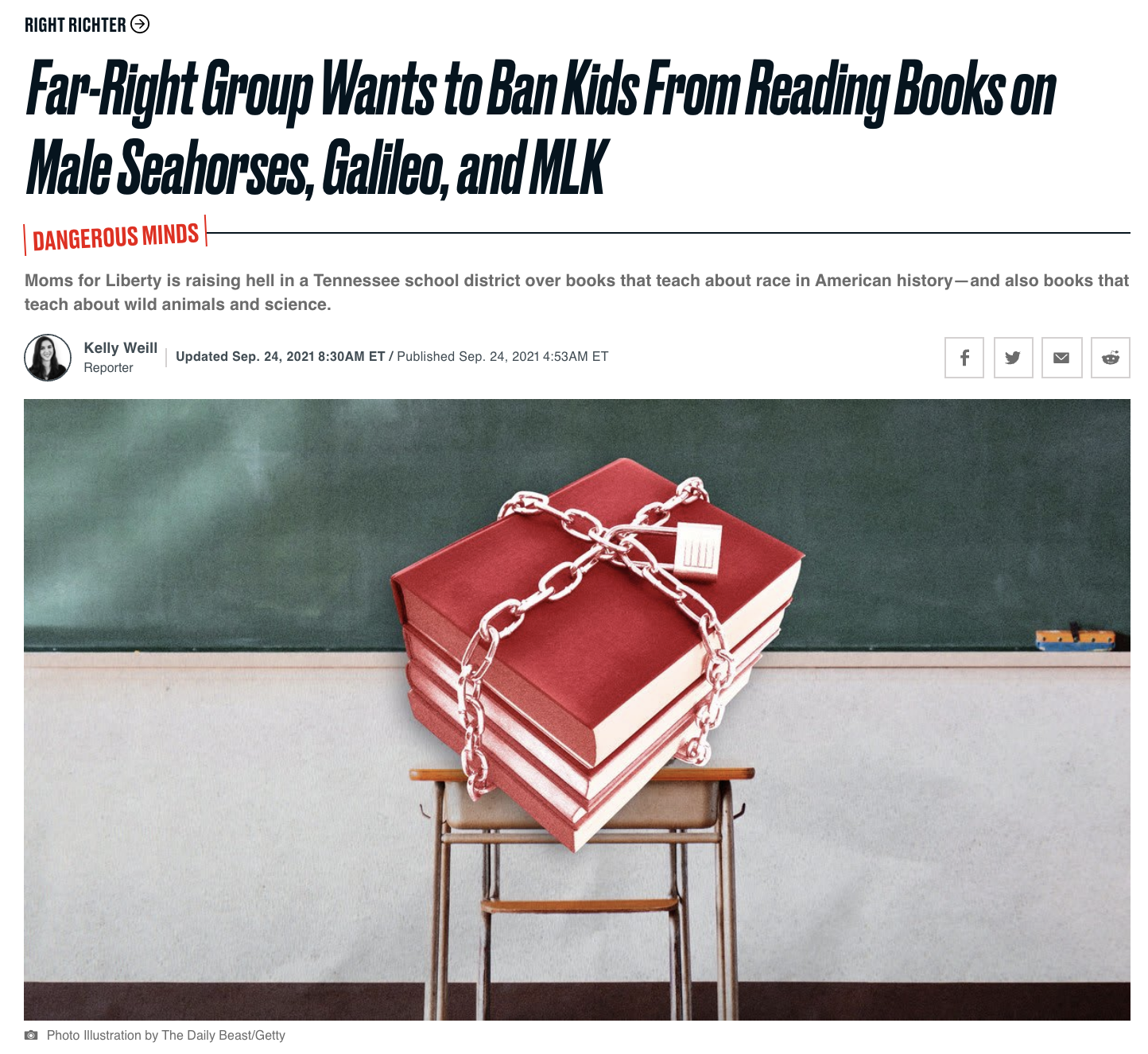 This article describes the battle in Tennessee’s Williamson County School District, in a state where there are already laws against teaching CRT (I object to any such laws).  Here’s some of the offensive stuff:

At the heart of that fight is a conservative group, led by a private-schoolparent, that has a sprawling list of complaints against common classroom books. Many of the books are about race, but other targets include dragons, sad little owls, and hurricanes.

. . .With school back in session, the Williamson County feud has been renewed, Reuters reported this week. And the scope of the proposed book ban is even broader and loonier than MFL’s June letter suggests.

Accompanying that letter is an 11-page spreadsheet with complaints about books on the district’s curriculum, ranging from popular books on civil rights heroes to books about poisonous animals (“text speaks of horned lizard squirting blood out of its eyes”), Johnny Appleseed (“story is sad and dark”), and Greek and Roman mythology (“illustration of the goddess Venus naked coming out of the ocean…story of Tantalus and how he cooks up, serves, and eats his son.”) A book about hurricanes is no good (“1st grade is too young to hear about possible devastating effects of hurricanes”) and a book about owls is designated as a downer. (“It’s a sad book, but turns out ok. Not a book I would want to read for fun,” an adult wrote of the owl book in the spreadsheet.)

You can find what I think are the 11 pages of spreadsheets here and here (enlarge a download), and you can see a pdf presentation of some of the offensive stuff here, along with some videos by The Offended.

But wait—there’s more! Foreign words don’t make the cut, and the parents also join those historians of science who say that the affair of Galileo does not show antiscientific behavior of the Catholic church!

Multiple books that contain Spanish or French Creole words receive warnings from the group for potentially “confusing” children. An article about crackdowns on civil rights demonstrators, meanwhile, is deemed inappropriate for “negative view of Firemen and police.” A fictional book about the Civil War (given to fifth graders) is deemed inappropriate, in part due to depictions of “out of marriage families between white men and black women” and descriptions of “white people as ‘bad’ or ‘evil.’”

At one juncture, the group implores the school district to include more charitable descriptions of the Catholic Church when teaching a book about astronomer Galileo Galilei, who was persecuted by said church for suggesting that Earth revolves around the sun.

“Where is the HERO of the church?” the group’s spreadsheet asks, “to contrast with their mistakes? There are so many opportunities to teach children the truth of our history as a nation. The Church has a huge and lasting influence on American culture. Both good and bad should be represented. The Christian church is responsible for the genesis of Hospitals, Orphanages, Social Work, Charity, to name a few.”

Finally, my favorite bit is the seahorse ban. As I’ve written before, both seahorses and pipefishes reverse the usual course of offspring care. In both groups, males have pouches to contain and incubate the fertilized eggs, and females compete for those eggs to get into those pouches. (This is because females can produce eggs faster than males can incubate broods.) Because here females compete for rare space in male pouches, sexual selection is reversed, and in seahorses and pipefish it is the females rather than the males that is the highly decorated sex (see here and here).

You can imagine the consternation this situation would cause for right-wingers: males get pregnant! Why, it’s almost like transexuality! And so they object:

MFL’s Williamson County chapter also takes issue with a picture book about seahorses, in part because it depicted “mating seahorses with pictures of postions [sic] and discussion of the male carrying the eggs.”

The Daily Beast reviewed the text in question via a children’s story time YouTube channel.

Readers looking for a Kama Sutra of seahorse sex will be disappointed. Sea Horse: The Shyest Fish In The Sea contains nothing more risqué than watercolor illustrations of two seahorses holding tails or touching bellies (never—heavens—at the same time).

The passage that “describes how they have sex” reads: “they twist their tails together and twirl gently around, changing color until they match. Sea horses are faithful to one mate and often pair up for life. Today Sea Horse’s mate is full of ripe eggs. The two of them dance until sunset and then she puts her eggs into his pouch. [JAC: OMG that is HOT!] Barbour sea horses mate every few weeks during the breeding season. Only the male sea horse has a pouch. Only the female sea horse can grow eggs.”

MFL recommends the book be reserved for older children, up to grade eight.

As your reward, here’s a video of a male seahorse giving birth to hundreds of miniatures (warning: sex-role reversal!):

18 thoughts on “Censorship of schoolbooks by the Right”