The other day I had a bright idea for a post on my drive to the store, and, since my short-term memory has always been lousy, I should have made a note to myself. SInce I didn’t do that, I promptly forgot it, though I knew the topic was interesting.

I was, however, just reminded of what I’d thought of by seeing the title below of a NYT op-ed by Curtis Chang (identified as “a co-founder of Christians and the Vaccine, a consulting faculty member at Duke Divinity School and the C.E.O. of CWR, a management consultancy serving secular nonprofits and government agencies”).

I haven’t yet read this op-ed except for the title, so let me first give my own view before I parse the article.

First, I agree with the title wholeheartedly.  The only people who should be exempted from vaccine mandates are those who might be injured by vaccines, including the immunocompromised.  Now adults above a certain age should be allowed to make medical decisions if those decisions don’t endanger anyone else. Thus, if you have appendicitis and are one of those sects that don’t accept medical intervention (Christian Science is supposed to be one, but members often sneak around the restrictions), it’s okay by me if you reject the operation and endanger yourself. (If you have a wife and kids, however, that may be another matter, largely because the kids, who could be left without a parent, don’t get to choose their faith.)

But with vaccinations, you’re endangering not only yourself by rejecting science-based medicine, but others as well. Thus, if you refuse the Covid shot on religious grounds, you’re endangering other people because you might get infected and spread the virus. Even if nearly everyone else is vaccinated, you could still infect the few who aren’t. Even the Bible talks about rendering unto Caesar. Well, Caesar is the state, and to the state belongs the purview of preventing pandemics and epidemics.

The fact that religious people are allowed to refuse medical care for their kids in some places, or get a slap on the wrist when they do—even when the child dies—is absolutely unconscionable. It’s one of the unjustified forms of “respect” that we afford to religious beliefs. The subject of religion and healthcare is largely the subject of the last chapter of my book Faith Versus Fact, and I tell some horrific stories of those who believe in faith healing letting their children die in the vain hope that God would save them. This should be a felony, and it is in some places, but all too often that unwarranted “respect” for faith gets parents either off the hook or with a minimal sentence. And all too often those parents justify their behavior, even when, by withholding medical care, they’ve killed their own child. As I note in my book (p. 234):

It’s not just the parents who are at fault. Religious exemptions are written into law by the federal and state governments—that is, those who represent all Americans. In fact, 38 of the 50 states have religious exemptions for child abuse and neglect in their civil codes, 15 states have such exemptions for misdemeanors, 17 for felony crimes against children, and five (Idaho, Iowa, Ohio, West Virginia, and Arkansas) have exemptions for manslaughter, murder, or capital murder. Altogether, 43 of the 50 states confer some type of civil or criminal immunity on parents who injure their children by withholding medical care on religious grounds.

As for vaccinations, there should be no religious exemptions for getting them, regardless of the dictate of your faith. That’s because refusing a vaccine is not a decision with purely personal consequences, but can have widespread and deleterious effects on other people. And yet, as I note further in my book (pp. 235-236):

Religious exemptions for vaccinations, allowed in 48 of the 50 U.S. states (all except Mississippi and West Virginia) endanger not only the children who don’t get immunized, but the community in general:  not everyone gets vaccinated, and even those who are don’t always acquire immunity. To attend public schools and many colleges, like the one where I teach, students must show evidence of vaccination for diseases like hepatitis, measles, mumps, diphtheria, and tetanus. The only exemptions permitted are for medical reasons, like a compromised immune system—and religion.

Nor are Christians the only believers who oppose immunization. Islamic clerics in Afghanistan, Pakistan, and Nigeria urge their followers to oppose polio vaccination, declaring it a conspiracy to sterilize Muslims. These efforts may prevent the complete eradication of polio from the human species, something already been achieved for smallpox. Dr. A Majid Katme, spokesman and former head of the Islamic Medical Association of the UK, described by the Guardian as “a respected figure in the British Muslim community,” has come out against all childhood vaccination, claiming that “the case of vaccination is first an Islamic one, based on Islamic ethos regarding the perfection of the natural human body’s immune defense system, empowered by great and prophetic guidance to avoid most infections.”  Taking his advice would, of course, be disastrous.

In all states, immunizations are required for public school enrollment, except for medical, religious and philosophical exemptions. Here’s the latest map (2021) of exemptions, taken from The National Conference of State Legislatures. As you can see, since my book was published in 2015, it appears that four states—Maine, New York, Connecticut, and California—no longer grant religious exemptions for vaccination. That’s good news. Note as well that only 15 states allow philosophical exemptions (the striped ones are also blue, meaning that they allow religious exemptions too). This shows not only that religion gets precedence over philosophy, but also that this precedence makes no sense, since a philosophical exemption is presumably a “reasoned” one (misguided though it may be), while religious dictates come from scripture or authority. Every state in the map below should be white. 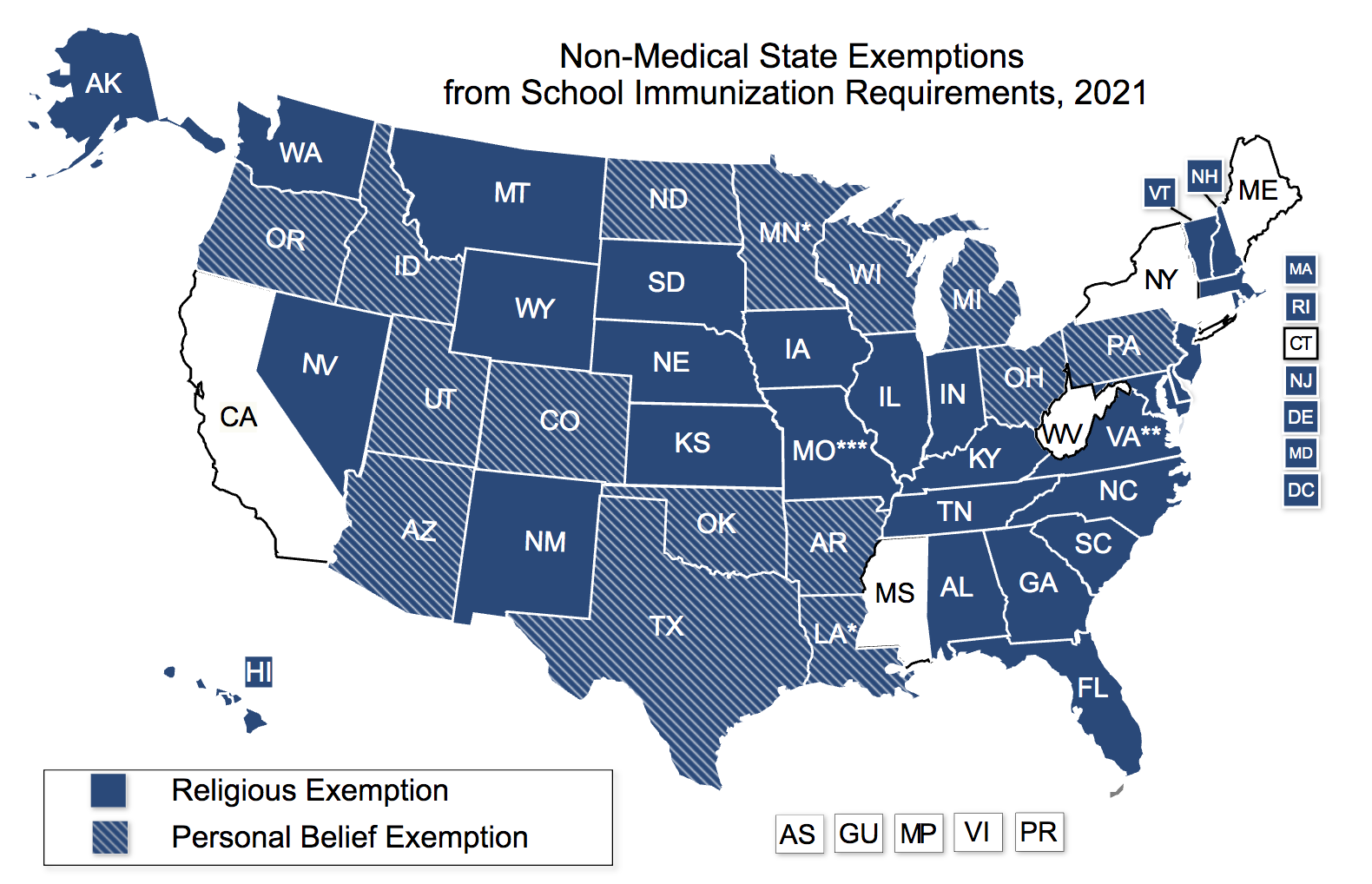 Now I’ll read the article, and you are free to at any time by clicking on the screenshot below. 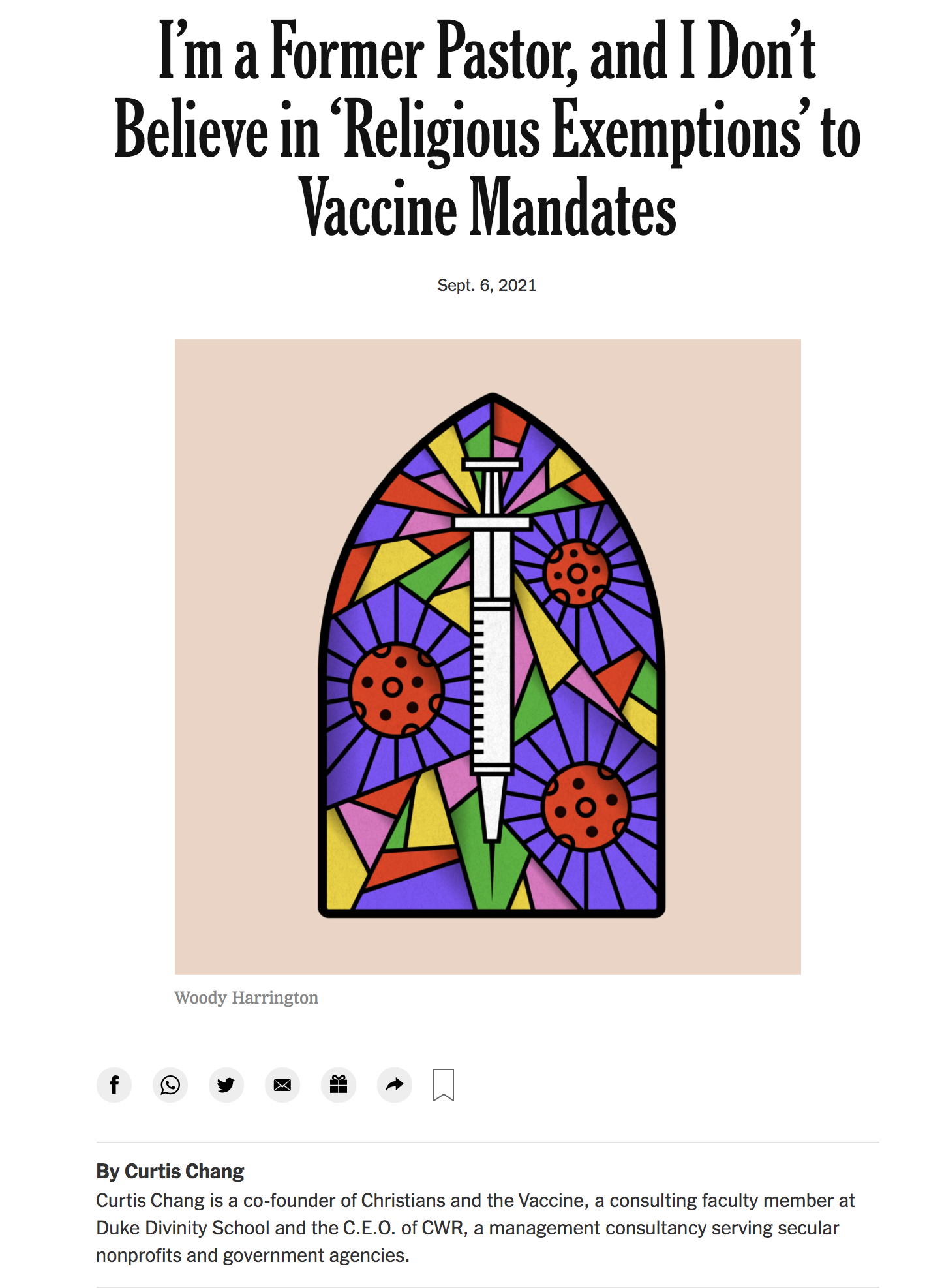 Chang and I largely agree, but diverge in three important ways:

First, though, he notes that the religious exemption comes from Title VII of the Civil Rights acts, which “require American employers to accommodate employees’ religious beliefs.” And those are the grounds on which many people are claiming religious exemption from the Covid vaccination, though Chang believes that these religionists aren’t really doing it on religious grounds (which don’t exist anyway, see below), but are “nonreligious and rooted in deep-seated suspicion of government and vulnerability to misinformation.”

Further, and this is what made me realize originally that this topic deserves a post, how many religions really have dictates prompting their followers to refuse vaccination?  We know about Christian Science, of course, and there are dozens of evangelical Christian sects, largely in the American Northwest, that refuse medical care as part of their faith. But try to find a justification for that in scripture. As Chang notes:

. . . there is no actual religious basis for exemptions from vaccine mandates in any established stream of Christianity. Within both Catholicism and all the major Protestant denominations, no creed or Scripture in any way prohibits Christians from getting the vaccine. Even the sect of Christian Scientists, which historically has abstained from medical treatment, has expressed openness to vaccines for the sake of the wider community. The consensus of mainstream Christian leaders — from Pope Francis to Franklin Graham — is that vaccination is consistent with biblical Christian faith.

Biblically based arguments against vaccination have been rebutted. The project Christians and the Vaccine, which I helped to found, has created numerous explainer videos in an effort to refute attempts by anti-vax Christians to hijack pro-life values, to distort biblical references like the “mark of the beast” and to inflame fears about government control. Christians who request religious exemptions rarely even try to offer substantive biblical and theological reasoning. Rather, the drivers for evangelical resistance are nonreligious and are rooted in deep-seated suspicion of government and vulnerability to misinformation.

That’s one way we differ. The other is that Chang appears to think that Christians have a “right” to refuse the vaccine in general, though not necessarily to be employed without it:

My plea to my fellow Christians: If you insist on refusing the vaccine, that is your right. But please do not bring God into it. Doing so is the very definition of violating the Third Commandment, “Thou shalt not take the name of the Lord thy God in vain.”

I don’t think there’s a “right” for Christians to refuse vaccines deemed essential by the state. They have no more right to do that than to refuse to pay taxes on religious grounds, nor to send their children to public schools without the required shots (except, of course, for those pesky exemptions).  And not paying taxes is far less harmful to society than walking around with a possibly infectious microbe.  Everyone should be vaccinated for diseases like Covid unless there are medical contraindications. I can see no reason not to. People may say that a few people may suffer serious side effects, but those are far less harmful than living through a pandemic.

Finally, many religious schools allow unvaccinated children to attend, and some parents are sending their children there, or homeschooling them, to get around the normal vaccine requirements (right now only older children must be vaccinated). For safe vaccines, as Covid-19 jabs will surely prove to be for younger children, all children everywhere must be vaccinated, just like adults. After all, even religious children mingle with the general public, and endanger them when they’re unvaccinated.

Of course given my view that religion is man-made and generally detrimental to society (this is of course demonstrated by the last chapter of my book), I would object to any favoritism based on religion that doesn’t apply to secular people. (This doesn’t mean, though, that I favor philosophical exemptions to vaccination!) But you don’t have to go that route when making the argument that nobody should be exempt from a Covid vaccination except on medical grounds. The public health argument is sufficient.

Perhaps you disagree, or have other views. By all means, use the comments to air your thoughts.

54 thoughts on “Should there be religious exemptions from vaccine mandates?”