Good morning on Monday, August 23, 2021: National Cuban Sandwich Day. It’s a day of cultural appropriation, but those sandwiches are good! Foodimentary describes a proper one:

Many say a “true” Cuban sandwich, starts with Cuban bread. The loaf is sliced into lengths of 8–12 inches, lightly buttered or brushed with olive oil on the crust, and cut in half horizontally. A coat of yellow mustard is spread on the bread. Then sliced roast pork, glazed ham, Swiss cheese, and thinly sliced dill pickles are added in layers. Sometimes the pork is marinated in mojo and slow roasted. 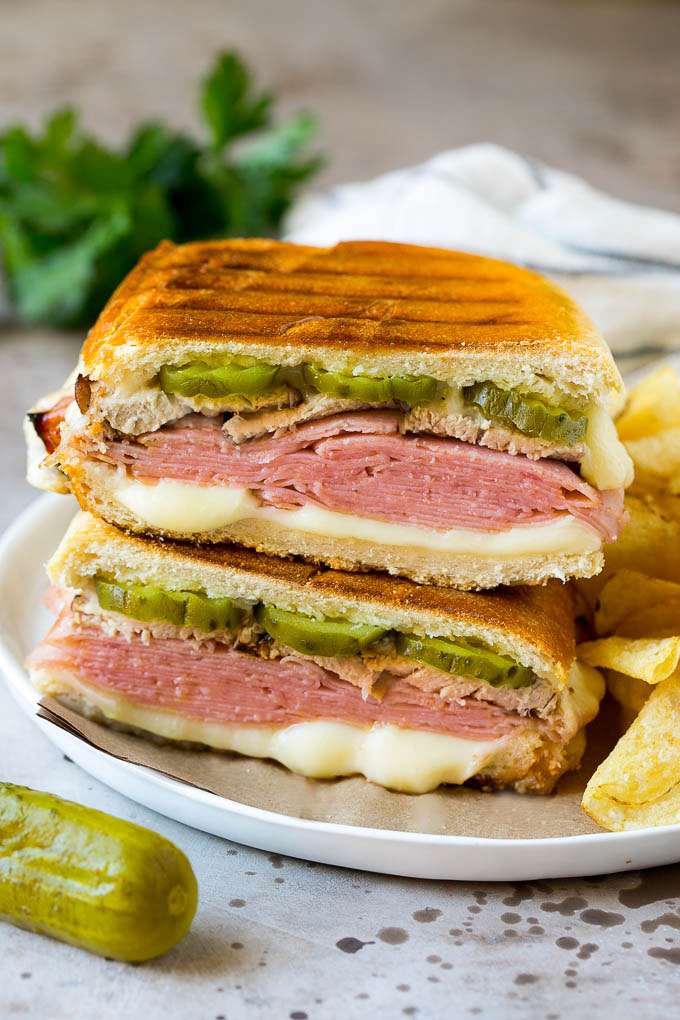 It’s also Buttered Corn Day, National Sponge Cake Day, Hug Your Sweetheart Day, European Day of Remembrance for Victims of Stalinism and Nazism, and International Day for the Remembrance of the Slave Trade and its Abolition.

It’s now 215 days since the Bidens moved into the White House and still there is no First Cat!  He promised the American people there would be a First Cat, and yet there is no cat to be seen. Did Joe and Dr. Jill lie to us??

If you care about the plight of Afghan women, and why you read more about it here than in most “MSM” sources, there’s a Spiked article you might look at called “The silence of Western feminists is deafening.” One excerpt among several descriptions about how the hammer’s coming down on the women from the Taliban:

And yet, in their moment of utmost need, Afghan women cannot turn to Western feminists for support. There have been no statements condemning the Taliban’s treatment of women from US vice-president Kamala Harris. [JAC: I believe Biden mentioned their plight.] Most mainstream feminist groups have been similarly silent. That tidal wave of support that greeted the victims of Harvey Weinstein? It’s dried up. For too many privileged Western feminists, sisterly solidarity ends at the borders of Europe.

Are you surprised? You don’t hear squat about the oppression of women in Palestine, either. Apparently it’s okay if “people of color” do it.

Why are American hospital costs so high, and why do they vary so much among insurers? We’ve discussed this a bit before, but yesterday’s New York Times has an informative and anger-inducing exposé about how hospitals are defying new laws to reveal the prices they negotiate with insurance companies for procedures. The prices can vary tenfold for some procedures. Why the secrecy? Because companies get a percentage of the price they charge companies for each procedure, and the companies often don’t even pay the costs, which are usually borne by employers. The result: it’s impossible to find out what you’ll have to pay for a given procedure, which is worrisome if you have a high deductable or have to pay a percentage of the overage. There is no “hospital shopping”.  This article will (or should) really piss you off.

The AP reports on what seems to be a primitive technique for detecting bacterial contamination in solutions or instrument. The procedure, called “LAL”, which involves using the blood of horseshoe crabs (the crabs are bled and returned to the ocean, but many of them don’t survive).  An explanation LAL process can be found here, but, as you see, it involves this:

Samples are mixed with the LAL reagent in a 96 well plate and a plate reader measure the color change over time.  The liquid in the wells becomes more yellow over time and the rate of that color change is proportional to the amount of endotoxin present in the sample.

There’s a synthetic substitute for horseshoe crab blood, but it hasn’t been approved by the government and companies are resistant to it anyway.

Don Everly, half of the famous Everly Brothers, whom nobody remembers except oldsters like me, died Friday in Nashville. He was 84. (Phil died in 2014 at 74.) Now they’re both gone but their songs and especially their ethereal harmonies influenced many rockers after them.  Here’s one of my favorite songs. I’ve posted it before, but so what? As I said then,

Stuff that happened on August 23 includes:

It was a grim execution, as portrayed below in “Braveheart”. Fortunately, they don’t show the excision of his nether parts or bowels:

The grand expeditions of Scott and Shackleton came later, of course but this paved the way. As Wikipedia notes:

“it was the first expedition to over-winter on the Antarctic mainland, the first to visit the Great Ice Barrier—later known as the Ross Ice Shelf—since Sir James Clark Ross’s groundbreaking expedition of 1839 to 1843, and the first to effect a landing on the Barrier’s surface. It also pioneered the use of dogs and sledges in Antarctic travel.”

Now here’s a conundrum: a photo labeled  “Capt. Lowell Smith and Lt. John P. Richter receiving the first mid-air refueling on June 27, 1923.” The date is off, as well as the duration of the flight (in the caption). Wikipedia editors, please note and fix!

It’s not clear whether either of these men will guilty of murder and armed robbery, but what is clear is that their trial was unfair, and led to protests throughout the world. Here they are, with the caption from Wikipedia:

Here’s the pact, which was of course nullified on June 22, 1941 when Germany invaded Russia. The title, in German, says “Secret additional protocol”:

Here’s a protest during the strike. I remember that no good liberal was buying grapes then: 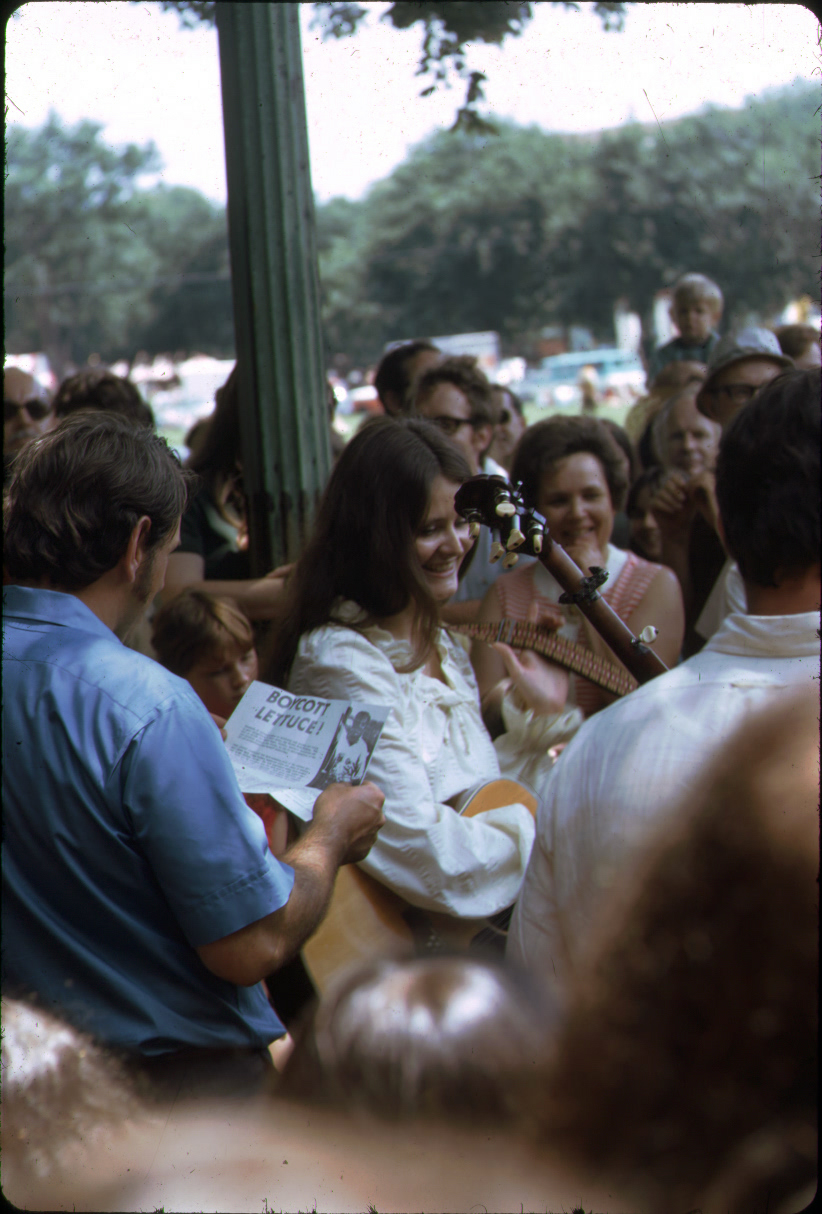 Here’s a photo taken by the cops of one of the two captors, Clark Olofsson, with some hostages (it was taken through a hole drilled through the wall). The robbery was ended with a tear-gas assault, and nobody was injured. 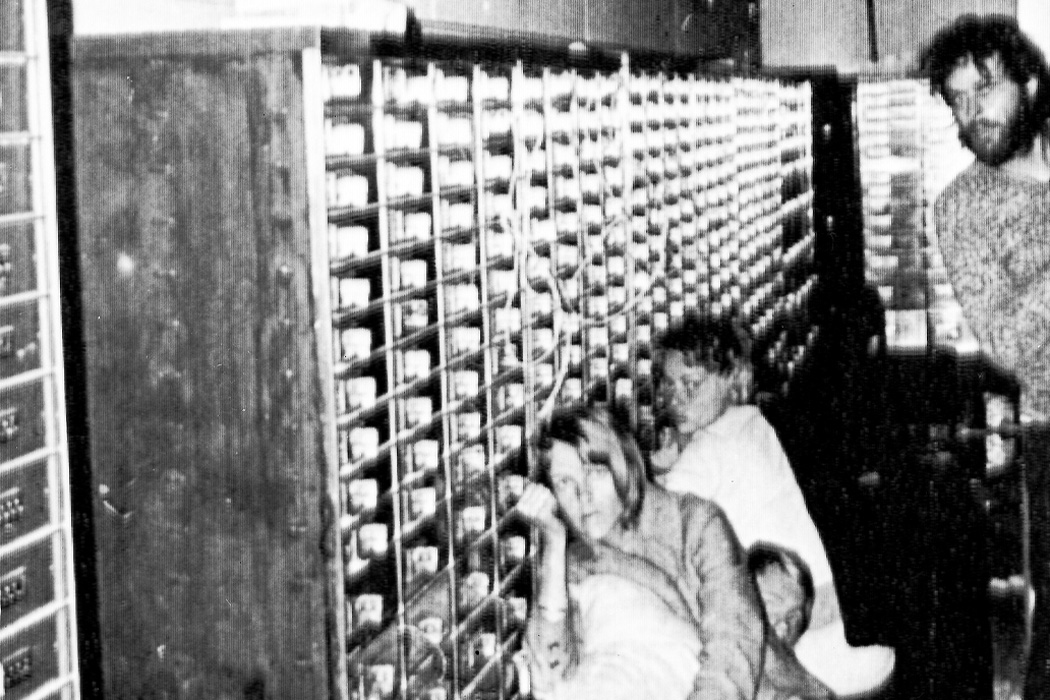 Here’s a heartwarming video of the “singing revolution”:

Here are the remains of all the Romanovs interred at the Peter and Paul Fortress in St. Petersburg. I photographed this on August 1, 2011, and have shown the photo before: 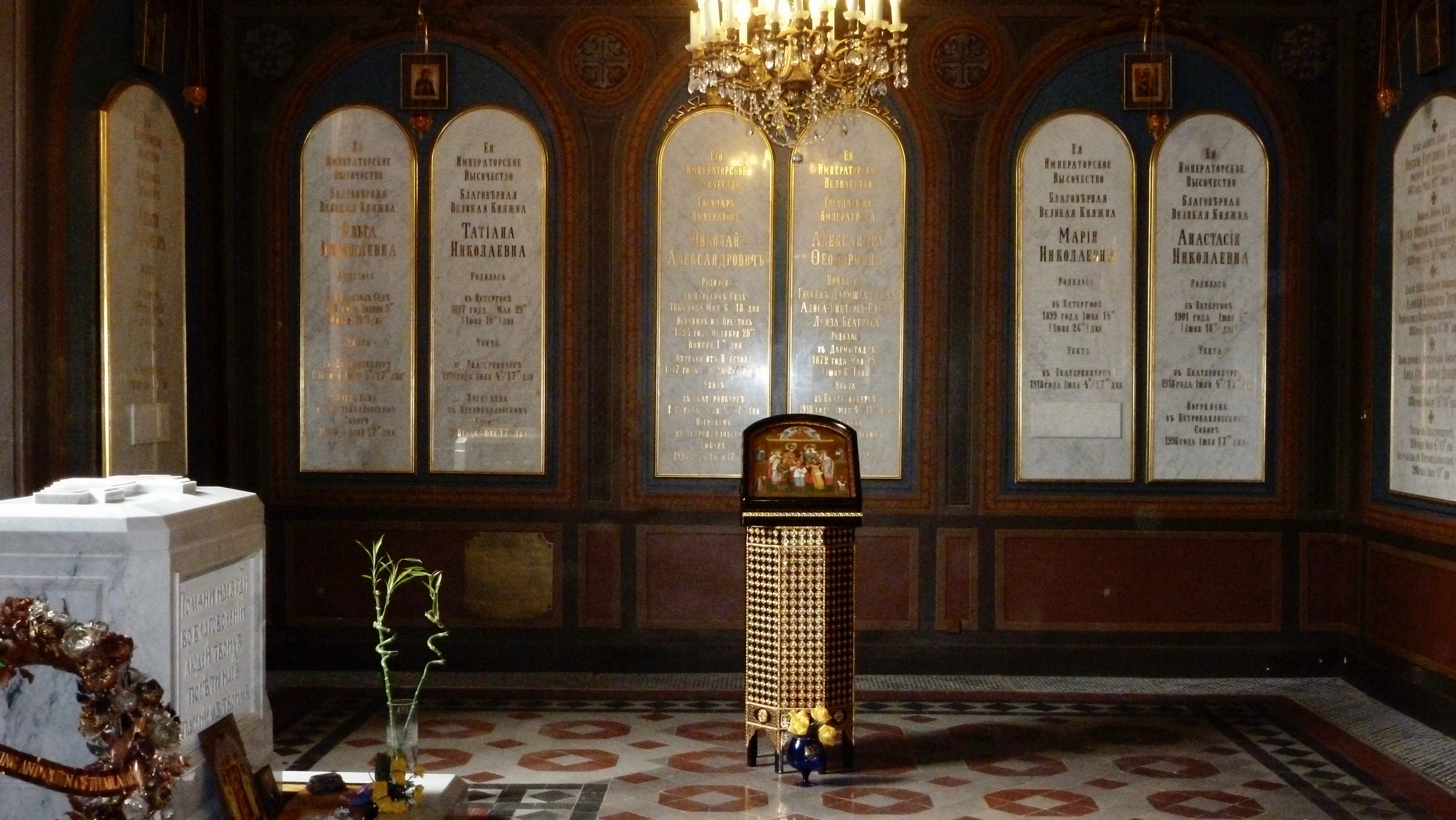 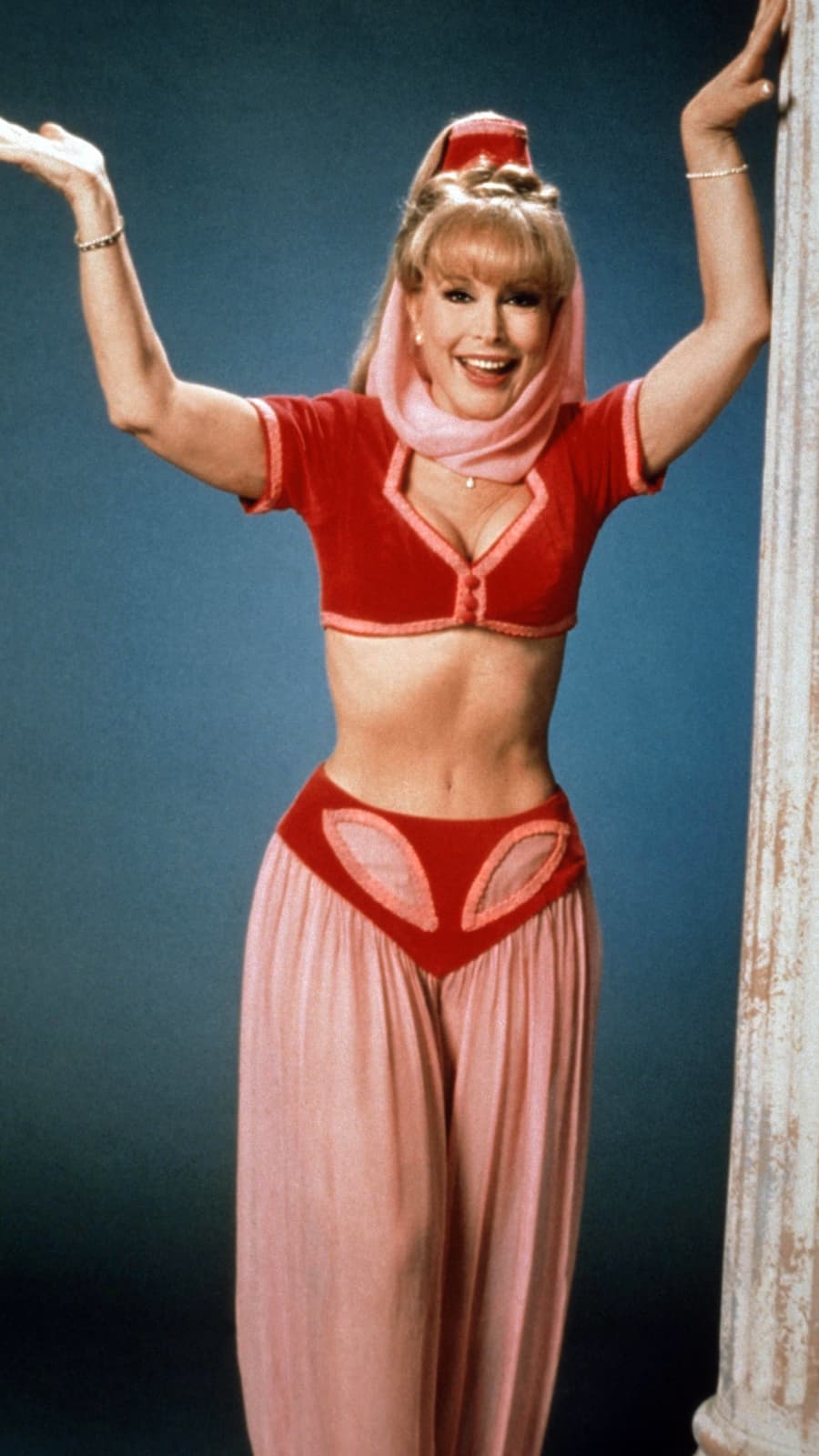 Those who passed away on August 23 include:

Here’s Valentino’s funeral procession, which is said to have drawn over 100,000 people.

Eisenstaedt took many famous photos (“sailor kissing girl in Times Square” is probably the most famous), but the one that gets me is his informal picture of Josef Goebbels. taken in September of 1933. Goebbels had learned that Eisenstaedt was Jewish, and the photographer describes the scene:

I found [Goebbels] sitting alone at a folding table on the lawn of the hotel. I photographed him from a distance without him being aware of it. As documentary reportage, the picture may have some value: it suggests his aloofness. Later I found him at the same table surrounded by aides and bodyguards. Goebbels seemed so small, while his bodyguards were huge. I walked up close and photographed Goebbels. It was horrible. He looked up at me with an expression full of hate. The result, however, was a much stronger photograph. There is no substitute for close personal contact and involvement with a subject, no matter how unpleasant it may be. 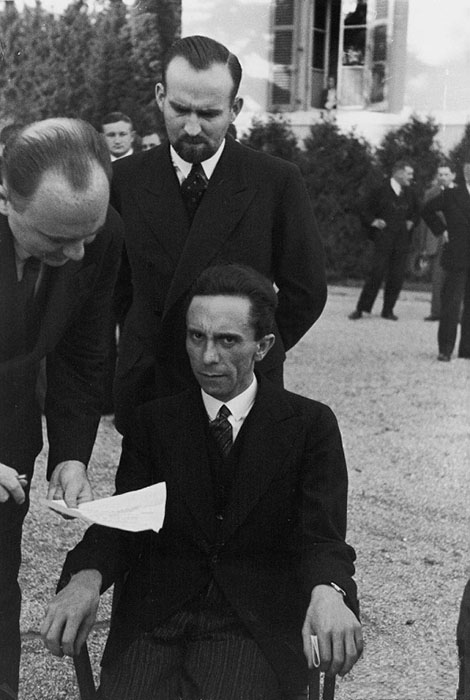 Meanwhile in Dobrzyn: Hili is being haughty and philosophical

A: What are you doing?
Hili: I’m deliberating about what I will ignore, and when. 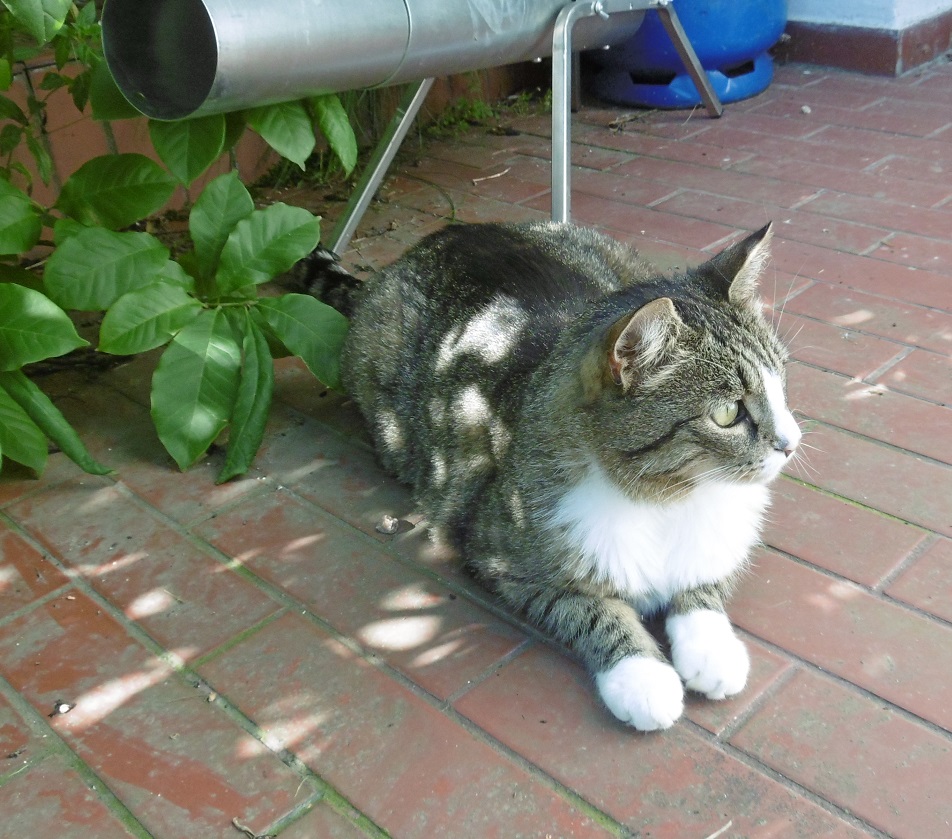 Mietek and Leon are on holiday in the mountains of Southern Poland, and walking on their leashes: 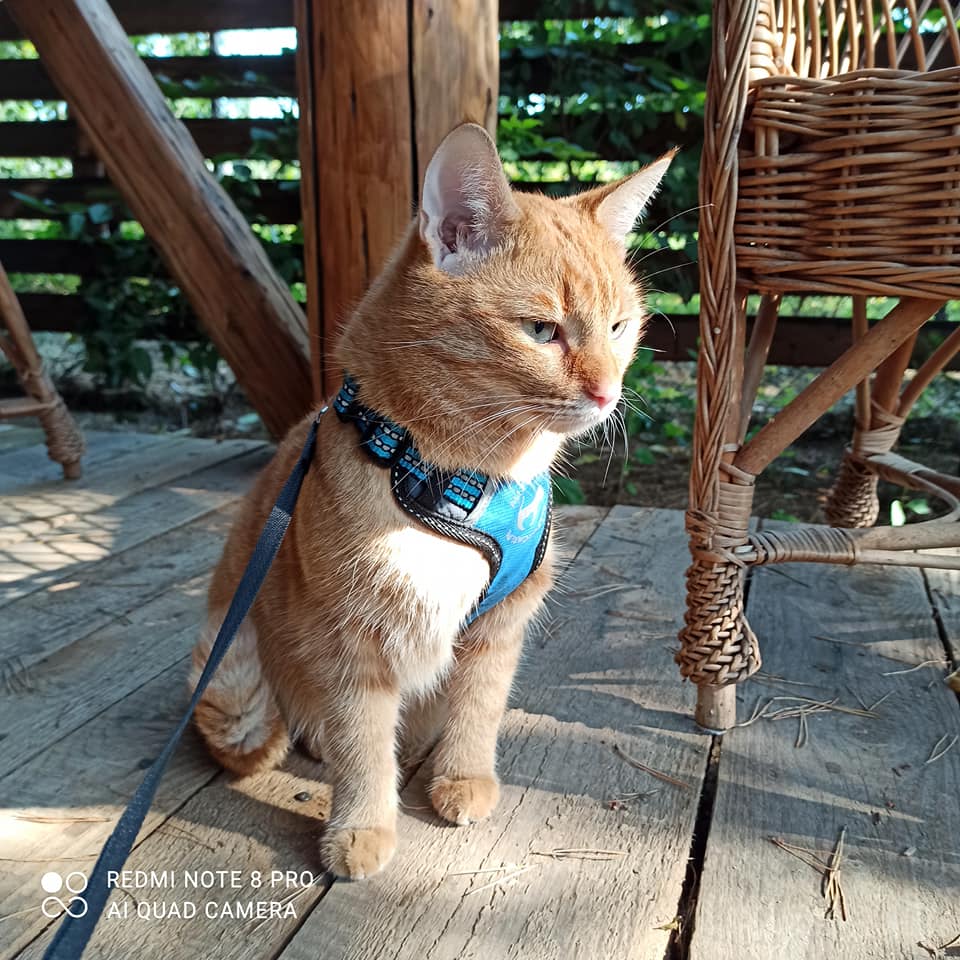 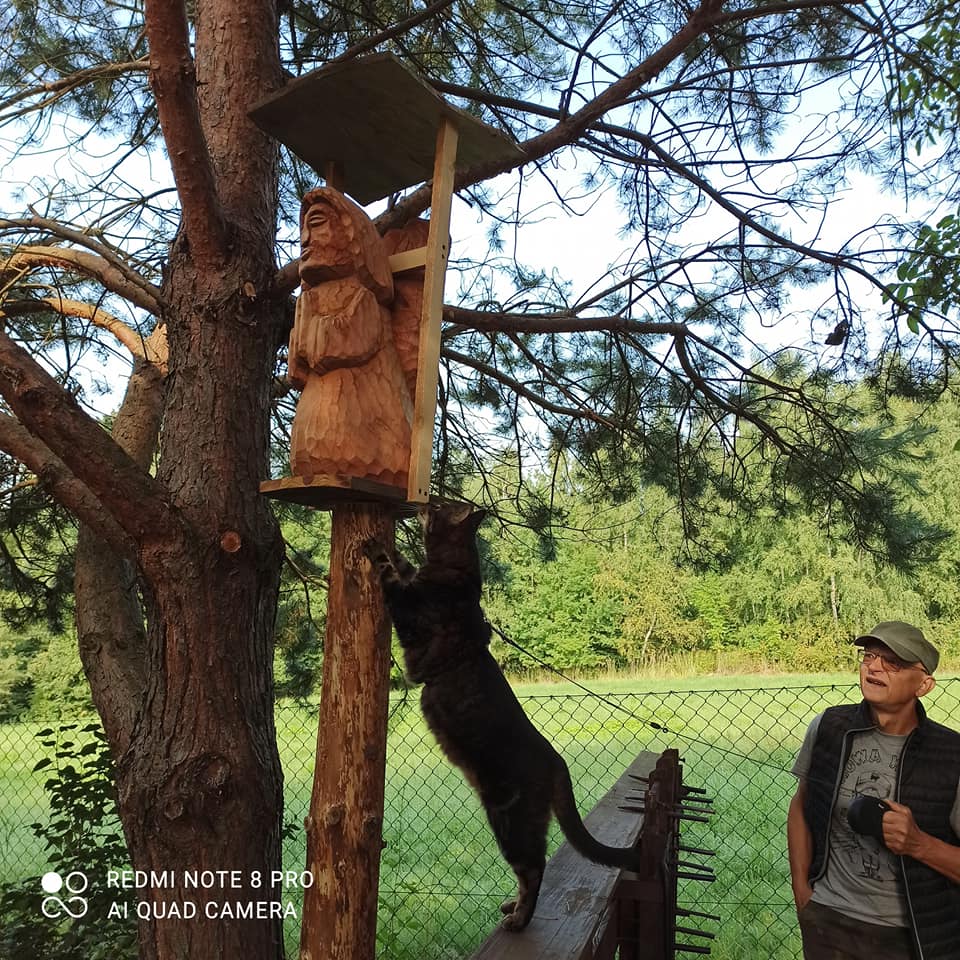 A bird cartoon from reader Bruce: 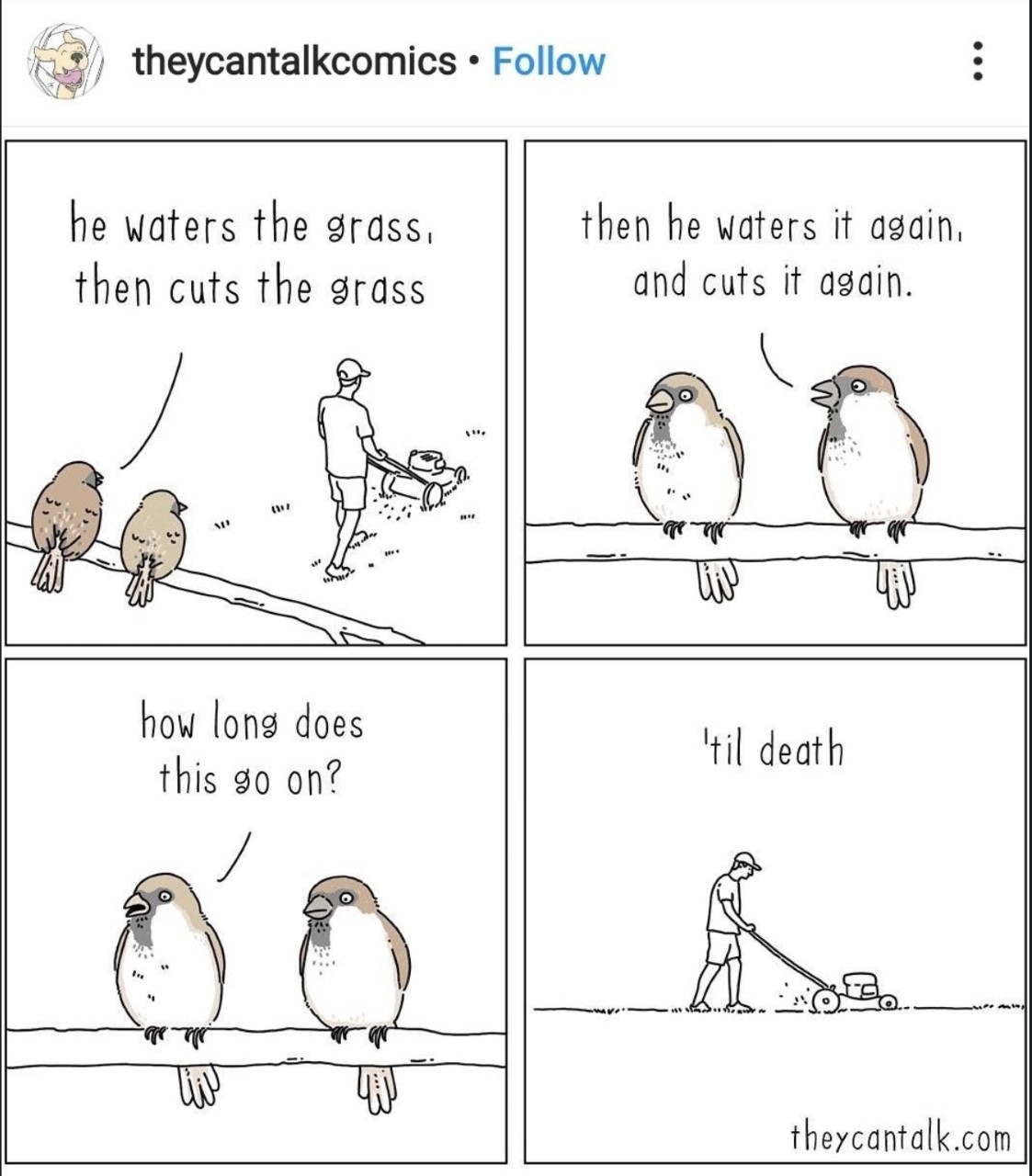 From Jesus of the Day: Goose helps cop. NAGAB! 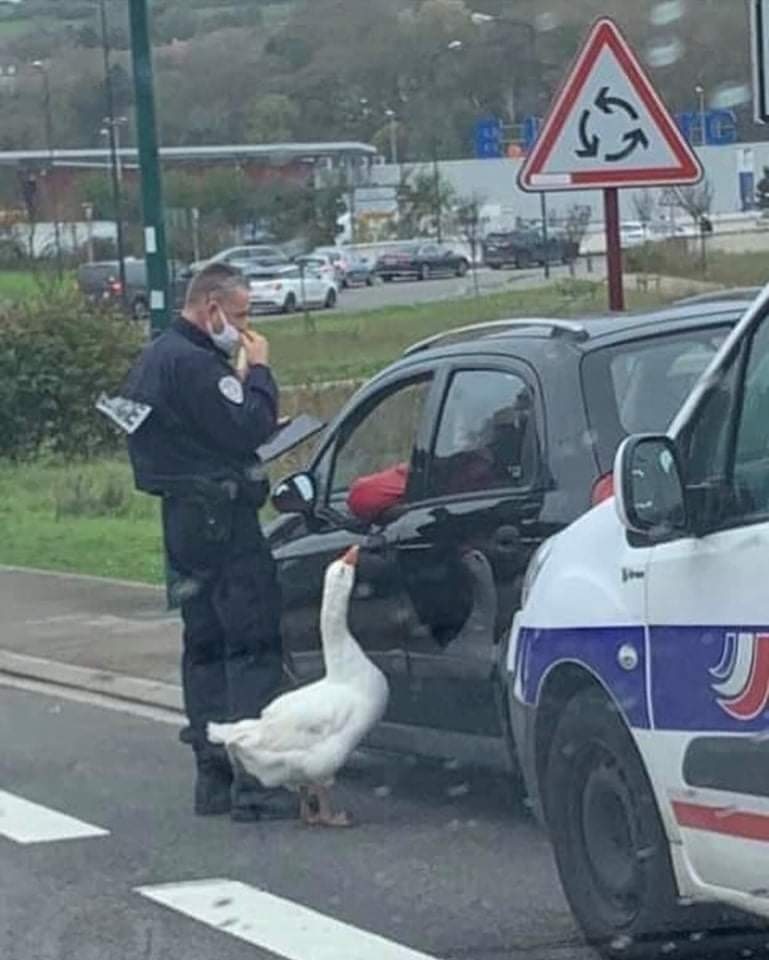 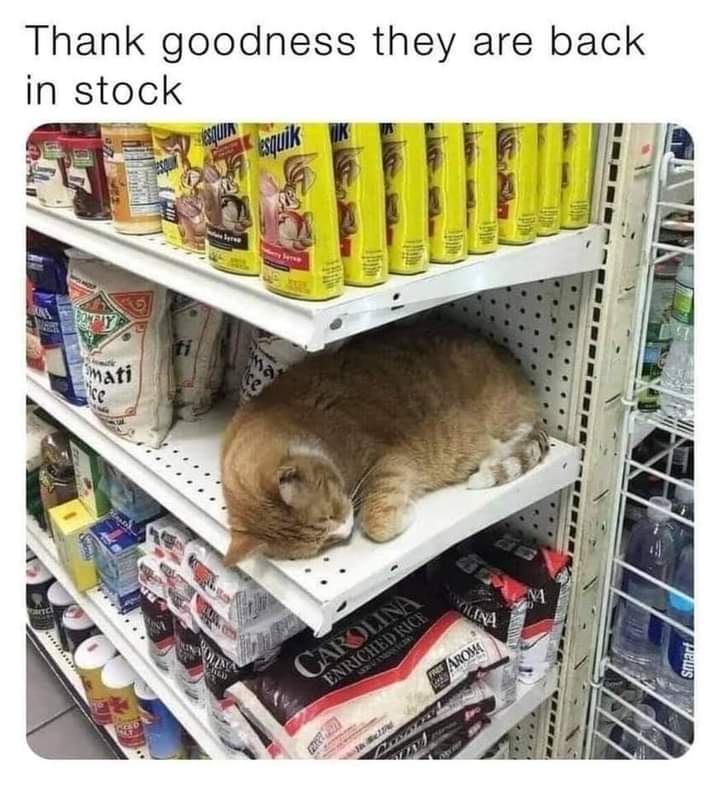 Masih continues interviewing Afghans about their experiences under the Taliban. So much for their promises that they’d ease up on oppressing women. Note that these women do not hide their identities.  Please listen and retweet it.

These two women were turned away from their work by Taliban. “The Taliban haven’t changed in 20 years but we are not the woman of 20 years ago, we want our full rights and we want the world to hear and help us.” pic.twitter.com/RD67cbmhIy

Today’s Auschwitz Memorial post. If you’re ever near Krakow, Poland, take the one-hour bus to Auschwitz and then the excellent tour. Or go early and wander around the Auschwitz part of the camp on your own. It will change your life.

23 August 1942 | A transport of 1,000 Jews deported from Drancy arrived at #Auschwitz. SS doctors selected 892 of them to be murdered in gas chambers.

Among them was Majta Rubin, Polish Jewish women who emigrated to France. She was killed with her daughters: Bella & Micheline. pic.twitter.com/ApLHVyAmho

From Malcolm. The Maricopa County (Arizona) Recorder (an employee who deals with records) has written a 38-page letter to his county residents telling them that the 2020 election was NOT STOLEN, at least in that county. He’s plenty mad. See the whole letter here. (h/t: Malcolm)

this is quite a letter https://t.co/lX5HMirCmB

From Luana: a capybara drinks maté in the traditional manner. But how does it know how to use a straw? English translation: “I never thought I would be alive to see capybaras taming chetos and fighting the mother of all battles in Nordelta. I’m like this:”

A tweet from Ginger K. who calls it “one lucky lobster”:

What if we're all misreading this photo and the lobsterwoman is so powerful that she's actually summoning a lobster out of the ocean into the boat. pic.twitter.com/OFS5ajYMzv

Three tweets from Matthew, who wants to know why Wyoming is such an outlier. Any thoughts?

Yearly road deaths per million people across the US and the EU. I quite like these cross-Atlantic comparisons. Source: https://t.co/3fgkTJKEyJ pic.twitter.com/meitmlpI3J

Well, I’ll be. I don’t know how he does it, but clearly he does and has control over the reflex:

We report on a truly astonishing case (open access): D.W., a person, without neurological abnormalities who has learned to change his pupil size voluntarily, as it stands at direct control. (Long but interesting thread following): https://t.co/t0kY571jzK pic.twitter.com/GjyqbwrxRO

Finally, this exchange is hilarious:

You’re not convincing me that this deity is omnipotent, Jim https://t.co/Xif6eyK0pT