Neil deGrasse Tyson prefers not to go after religion very strongly (though he has on rare occasions), believing that if you diss somebody’s religion, it prevents them from accepting the science you want to purvey—especially evolution. And he’s probably right, at least if you try to cover both subjects in a single lecture. The result is that Tyson is soft on faith, as you can see in the video below.

This video was put on YouTube last year, but I don’t know the venue or the title. Tyson shows a ranking of 34 countries and the degree of acceptance of evolution of their inhabitants. It’s well known data, but Tyson cherry-picks it to try to show that “religious” countries can be relatively high in accepting evolution, touting accommodation and giving us “hope in the world”. At least that’s how I understand his aim. Examples he adduces are these:

a). Britain is high in accepting evolution but was the country where the Anglican religion was founded. Tyson said that this shows that Britain was “a quite religious community” but is still “very high in this evolution support.” (That was centuries ago, and Britain is no longer so religious!)
b.) Likewise in Germany, where Protestantism was born under Luther, acceptance of evolution high as well. Ditto with Catholic Italy.
c.) Eastern bloc countries are low on religion, as you might expect as they were largely atheistic countries under communism, but fall in the middle on accepting evolution

Tyson finds this “hard to understand”, presumably because religion is supposed to be inimical to accepting evolution. He gives an anecdote about sending people who question the absence of God in the AMNH’s Big Bang exhibit over to the “human evolution” exhibit, concluding that the AMNH’s evidence for evolution is much stronger than the Big Bang in buttressing acceptance of evolution (he doesn’t mention physics). I grant him that, but so what?

Tyson then boasts about how he bested Dawkins in a panel discussion, showing a video of their verbal fencing. Tyson asks Dawkins whether, though Dawkins wants badly to promote evolution, doesn’t he undercut that purpose—and his role as “Professor of the Understanding of Science”—by being a vociferous anti-theist? Doesn’t criticism of religion dispel the “sensitivity” needed to get people to accept science?

It’s a fair question, and one that I’ve faced. Dawkins responds by saying, “I gratefully accept the rebuke” and then goes on to give his own anecdote. In the meantime, Tyson narrates the video by showing how successful he was in “dissing the dude” (Dawkins). Tyson is clearly showing off, but implicitly arguing that you can’t criticize religion if you want people to accept evolution.

The answer that I give is that you can be both an antitheist and a promoter of evolution—you just don’t do it at the same time. Does Tyson think that Dawkins should simply take off his antitheist hat and never criticize religion at all? That idea neglects the fact that the downside of religion goes far deeper than merely preventing acceptance of evolution. Look at what the Taliban does, for instance, or how Catholicism has led to all kinds of inimical restrictions on sex, to the terrifying of children, and to pedophilia. Look how hyperorthodox Jews turn women into breeding stock.  Religious wars and disputations have led to the death of millions. Next to that, creationism is small potatoes.

So no, Dawkins shouldn’t shut up. After all, The God Delusion was one of the best sellers of our time, moving more than a million copies.  And as the old Dawkins site “Converts Corner” attests, it helped dispel the religiosity of many people.  So Richard’s antitheism was instrumental in helping drive people away from faith and towards rationality—and science. (Note how many people in the Corner link the rejection of religion with the acceptance of science.)

At the same time, with his evolution books like The Selfish Gene, Climbing Mount Improbable, and (my favorite), The Blind Watchmaker, Richard not only educated people about science, but got them to accept evolution and its marvels. How many people have attested that it was Richard’s writings that brought them to accepting evolution and appreciating science?

So while Tyson may be right about dissing religion and selling evolution in the same lecture, Dawkins has been inordinately successful in not only helping drive religion from our world, but in getting people to accept and love science. You can say that without the first activity he would have been more successful at the second, but Dawkins, like me, has more than one goal in his life.

By the way, if you analyze the data Tyson presents in his talk above, it actually provides some support for the incompatibility of science and faith. What I did in the Evolution paper below (click for free access) was to correlate these 34 countries’ acceptance of evolution with their religiosity. And the correlation was negative. (As President of the Society for the Study of Evolution, which publishes the journal, I got the privilege of publishing one article, and I wrote this one. As you can imagine, it took some trouble to get it accepted, but the journal did print it!). 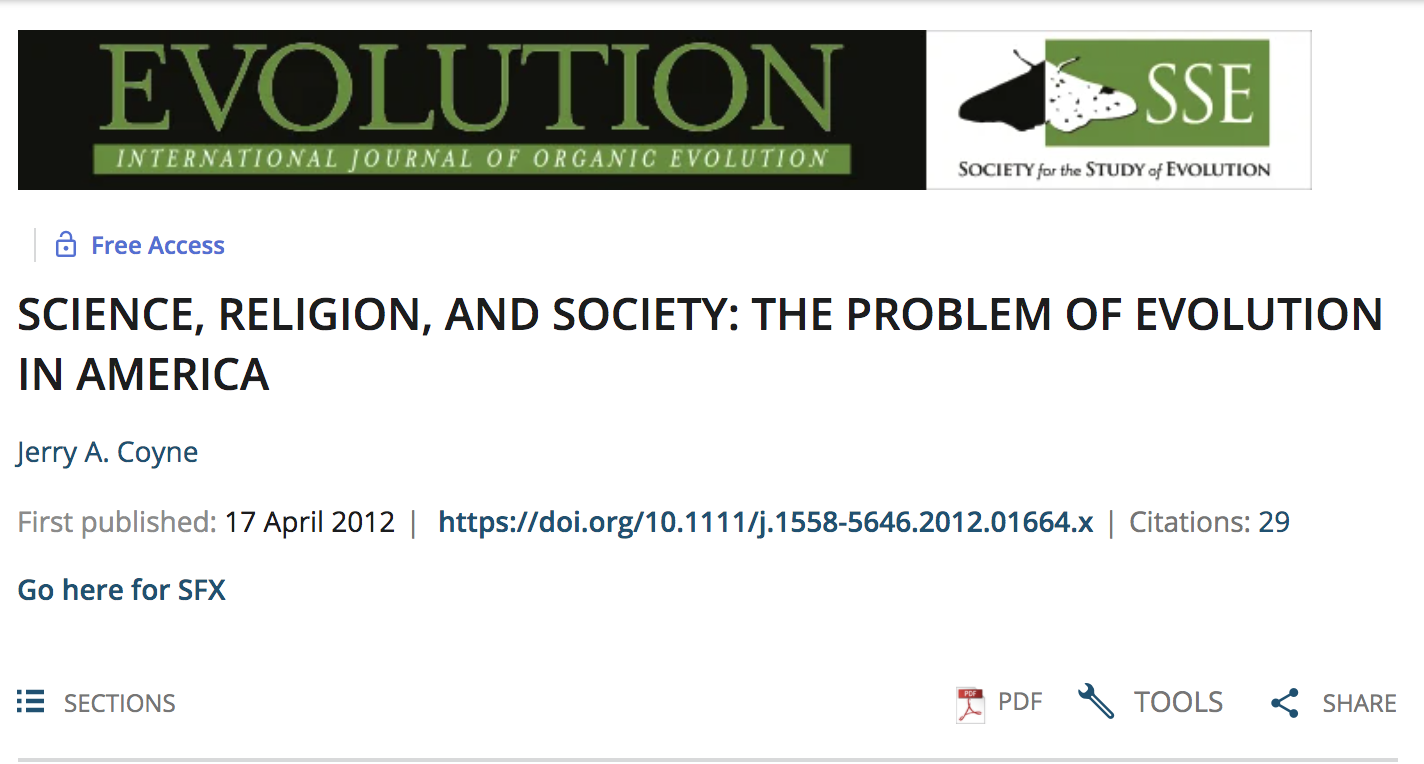 If you take Miller’s data shown in Tyson’s talk, and correlate it with the religiosity of the 34 countries, with each dot representing a country, you see a strong and significant negative correlation: the more religious a country is (moving right on the X axis), the less likely its inhabitants are to accept evolution (moving down on the Y axis). Here is that plot with the caption from my original figure:

Now this shows a correlation, not causation, so it may not show, for example, that belief in God makes people resistant to accepting evolution. Another interpretation is that acceptance of evolution is the causal factor, and that leads people to become atheists (this may be true for some folks). But I think, as I said in the paper, a third factor is in play here that leads to the correlation: human well being. For if you plot either various indices of well being, like the UN’s “Happiness Index” or the “Successful Societies Scale” (a measure of social support) against religiosity, you find out that the happiest people, and the healthiest societies, are the least religious. (See my paper for the evidence) And if you lose your religion because your society, as a healthy and happy one, makes religion superfluous, you naturally begin to accept evolution. (As I always say, “you can have religions without creationism, but you can’t have creationism without religion.”) In support of the idea that low well-being makes one religious, I often cite the full quotation from Marx (most people leave out all but the last sentence):

“Religion is the sigh of the oppressed creature, the heart of a heartless world, and the soul of soulless conditions. It is the opium of the people.”

At any rate, I believe Tyson distorts the data by cherry-picking individual points.

Therefore, my explanation for the correlation above, including social causation, is this, written in my Evolution paper:

Creationism in America, then, may be a symptom of religion, but religion in the modern world may itself be a symptom of unhealthy societies. Ultimately, the best strategy to make Americans more receptive to evolution might require loosening the grip of religion on our country. This may sound not only invidious but untenable, yet data from other countries suggest that such secularism is possible and, indeed, is increasing in the United States at this moment. But weakening religion may itself require other, more profound changes: creating a society that is more just, more caring, more egalitarian. Regardless of how you feel about religion, that is surely a goal most of us can endorse.

If you’re interested, read the paper, for it’s written not for professional evolutionary biologists but for the educated layperson.

By the way, the correlation between acceptance of evolution and religiosity also holds strongly for the 50 American states as well. I couldn’t get the data for religiosity of individual states, but in my lecture on the incompatibility of faith and science, I do show a slide in which I there is a bar graph depicting the acceptance of evolution in each state. I found separate data for the ten most religious states (red arrows) and the ten least religious states (blue arrows), and put the arrows next to the states in the bar chart.

As you see below, all the blue arrows are above all the red ones. That is, every one of the ten least religious states has higher acceptance of evolution than all of the most religious states. Why? I think the reason is the same as for the correlation among countries.

Thus endeth today’s sermon. Praise Ceiling Cat, and may fleas be upon him. Amen.