The more I read about woke groups and “progressive” liberals, the more I see their demands converging on a type of university communism in which hierarchies are spurned, power rests in the hands of all the people, who decide everything as a group, speech is censored, and people get stuff according to their needs, not their abilities (ergo the calls for dissolving the meritocracy).

At least that’s the idea that struck me when I read a new op-ed in our student newspaper, The Chicago Maroon, by the “Library Activist Network at UChicago,” a group of activists who work at the library but refuse to give their names. Even the title of the piece, “A People’s Library and a People’s University”, conjures up that image. The anti-hierarchy and meritocracy trope is particularly strong when the anonymous writers argue that they want the University administration abolished (along with the Board of Trustees), and “replaced with student-staff-community council.”

You can read their beefs and demands at the site below (click on screenshot): 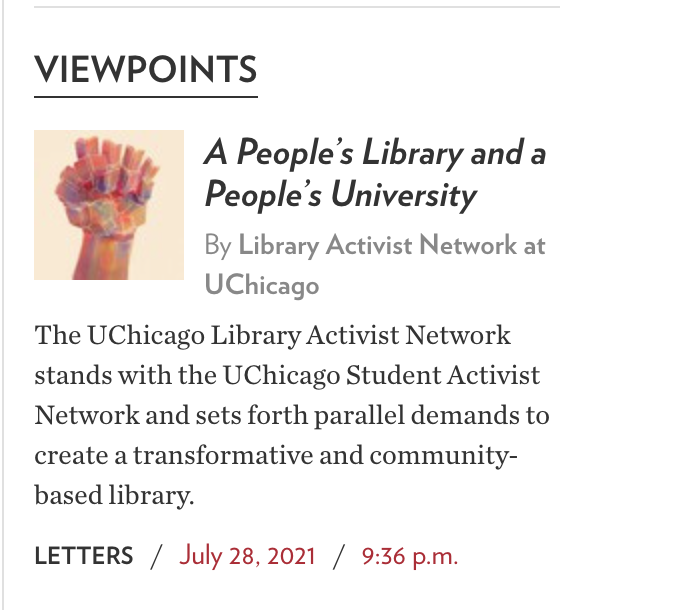 Their complaint is that the library as well as the administration are foci of “structural racism”, and the library and University must take action to remedy this. That includes abolishing the University police force— long a demand of student activists here.

First, what is the evidence that the library is structurally racist? I can’t find any. The long op-ed mentions “racism in library spaces in the past year” But Googling “racism University of Chicago library” leads back only to the op-ed above and an earlier one by the same group that gives no examples. If the Library is rife with structural racism, we should be hearing of incident after incident there; but I’ve seen none in the “progressive” student newspaper. Now surely, as in all areas of society, some people in the library have racist attitudes, but that is not structural racism, which is racial discrimination embedded within the library system.

One complaint is that the library workers are underpaid and subject to authoritarian dictates by those above them in the hierarchy, who are “privileged.” There may be some truth in the poor treatment of workers, but I can’t speak to that. But the activists’ important concern is their objection to the University of Chicago police, who have full police powers on and around campus. For some reason I can’t fathom, the activists want the campus police completely abolished, which only a chowderhead would argue would make the campus safer—much less attract students. Here’s the big complaint about our cops in the op-ed:

The Board of Trustees, outgoing president Robert Zimmer, and Provost Ka Yee Lee refuse to tell us how much they spend on a private police force that shot a student during a mental health crisis, taunted student protesters and endangered their health, and harassed students. While UCPD is exempt from public oversight, its few published statistics show that officers disproportionately stop and question Black people, the majority of whom are not breaking any laws. Despite daily reminders that UCPD does not keep our community safe, University leaders continue to defend UCPD and seek to avoid and delay accountability through yet more committees that go nowhere and accomplish no actual change.

I don’t think Universities regularly reveal the budgets of their constituent units budgets to the world, and so don’t know see that is so odious. As far as I know, nearly all units of the University, including my own department and others, have a budget that is not publicly available.

As for the student shot “during a mental health crisis”, I described it in a 2018 post. Charles Thomas, a fourth-year student with mental health issues, was accosted by campus police after he went through an alley, breaking doors and car windows with an iron bar. He then started screaming and went after the University police who showed up; here’s the Maroon‘s own description:

Bodycam and dashboard footage released by the University shows officers confronting Thomas.  As he walks toward them, an officer can be heard shouting, “Put down the weapon!” while Thomas shouts “What the fuck do you want?” and “Fuck you.” About a minute after the officers arrived on the scene, Thomas begins running rapidly toward the individual wearing the body camera, who commanded Thomas again to drop the weapon, and then fired a single shot into his shoulder.”

The Chicago Sun-Times reported that the cop repeatedly asked Thomas to drop the weapon, which was a three-foot-long iron bar. This is verified by the bodycam video shown on the Sun-Times site (see also the second video on this page.) Thomas was jailed for a while, had another episode in which he was tasered (not by the U of C police), and finally underwent a program that prompted the prosecution to drop the felony charges against him.

Still, this incident is repeatedly cited by campus activists as a reason to abolish the University of Chicago Police force! What was the cop supposed to do? Let himself get bashed in the head with an iron bar? He shot the student in the shoulder to disable him, not to kill him, and I see that as proper police procedure.

The accusation of disproportionality in stopping people of color on campus or in traffic should be taken seriously, and there is disproportionality of confrontations compared to the community composition at large. But as John McWhorter and Glenn Loury have emphasized repeatedly, this depends on whether there is a disproportionality of incidents among groups that require the cops to be called. (Traffic stops are a different matter unless there is differential disobeying of traffic laws, but studies in other areas have shown evidence of racism from traffic stops,—but not from shootings.)

Finally, as for “endangering the health of student protestors”, this refers to students occupying the University Police Station after a demonstration in front of the Provost’s house (which was illegal but allowed to go on for a week) was broken up. The “endangering health” business apparently refers only to the fact that although the students were trespassing and asked to leave, they were neither arrested nor kicked out. Their “health was endangered” because they were not allowed to order pizza, receive food brought by others from outside, or use the cops’ restroom, which is not public; and they were told that if they needed to get food or use the restroom, they were free to leave the station, but would not be let back in. That, too, sounds like a fair deal. After all, the occupying students could have been heaved out of the police station or arrested for trespassing, but were not. And actually, the students were endangering their own health as well as that of the police, for this crowding into the police station occurred at a time when Covid restrictions prohibited such crowds.

But none of this has anything to do with a “people’s library”. It reflects the misguided sentiments of activists who work in the library, and are using present social unrest to leverage a number of changes they want.  Within the library itself, this includes forgiving all library fees and fines, ending police and security presence in the library, raising benefits for staff, including free remission of U of C tuition to workers (even faculty don’t get that), create a committee to investigate the library’s connection to slavery, open the library to everyone from the South Side Community, and “hire librarians and library workers with expertise in reparations to support the proposed critical race studies department.”

And then there are all the “demands” that have even less to do with the library, including supporting the BDS movement and “cutting all University ties to Israel”. To wit:

As usual, these organizations take stands verging on anti-Semitism. For “cutting all University ties to Israel” goes beyond the BDS principles. And do they realize that abolishing the campus police, who have a number of call boxes scattered across campus, will result in parents refusing to send their students here?

I suspect there are some reasonable demands scattered throughout this histrionic list of reforms, but their force is weakened by their being embedded in a list of things that will never happen and in fact will alienate potential allies like me. It’s as if the social unrest of the last 18 months has somehow given campus activists a license to ask for everything, including things that are impossible or unfeasible. It makes them look petulant and unreasonable. They are “demands,” not “considerations”.

And the activists’ refusal to give their names bothers me as well. I suppose that, if asked, they would say that they fear retributions, but this is the University of Chicago, and retributions against those who speak out—even against the University—are strictly forbidden. That’s part of our free speech policy.

In the history of social activism that I know about, I don’t know of many cases in which protestors insist on hiding their identities. This is a fairly new trend. And it’s unjustifiable in light of the University’s policy of not punishing peaceful protestors. In this case, anonymity is in fact a sign of cowardice—of refusing to stand behind your words as an identifiable person.