Lou Jost, working at a field station in Ecuador, has some photos of a recent discovery as well as a video featuring his explanation of the newly seen phenomenon: the production by some plants of fluorescent light. His text and IDs are indented, and you can enlarge his photos by clicking on them.

Most plants look green in sunlight, because leaves reflect green light. But along with this reflected light, plants are simultaneously producing their own light in dazzling colors. This emitted (as opposed to reflected) light is called “fluorescence”; plants are doing the same thing as fluorescent light bulbs, with the sun providing the energy. This fluorescence light produced by the plant is weak and is normally drowned out by the reflected sunlight. However, if we power the plant “light bulb” with ultraviolet light rather than visible sunlight, it doesn’t wash out the fluorescence (because ultraviolet light is invisible), so we can see the emitted colors in all their glory.

I made this video about fluorescence for the Natural History Institute. You can skip the first half: it’s just me explaining fluorescence, but in the second half [JAC: about 6:15] I take you out to see the fluorescence for yourselves.

Here are some additional photos I made of the fluorescence being emitted by some of our local plants. Liverworts are especially brilliant. The green liverwort below is in ordinary sunlight. It’s glowing red but you can’t see that because the sun is too bright. The other photos show just the fluorescence light: the first two show the visible fluorescence, and the third photo is taken with a camera that can also see infrared light, so it shows both the visible and infrared fluorescence. 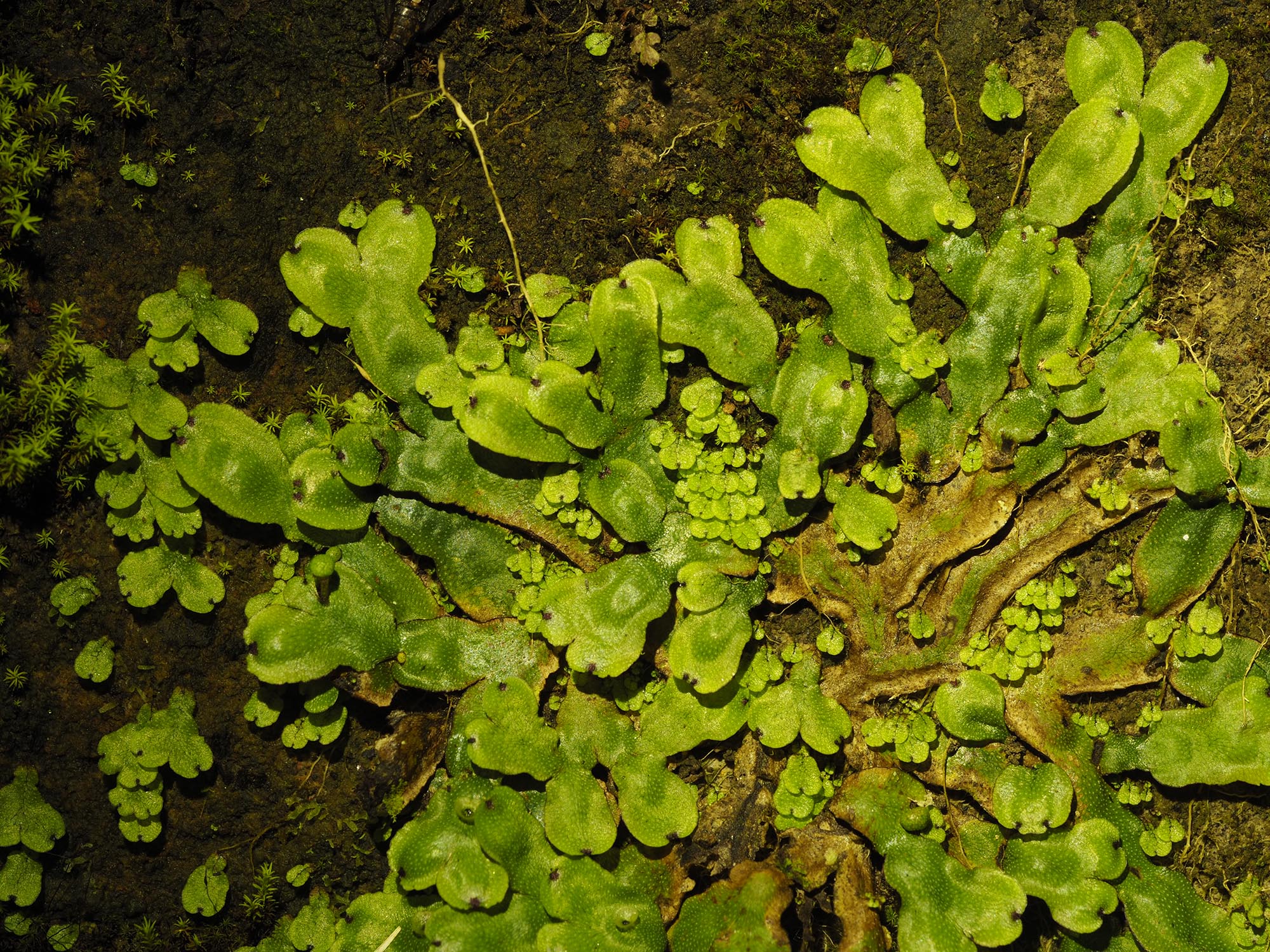 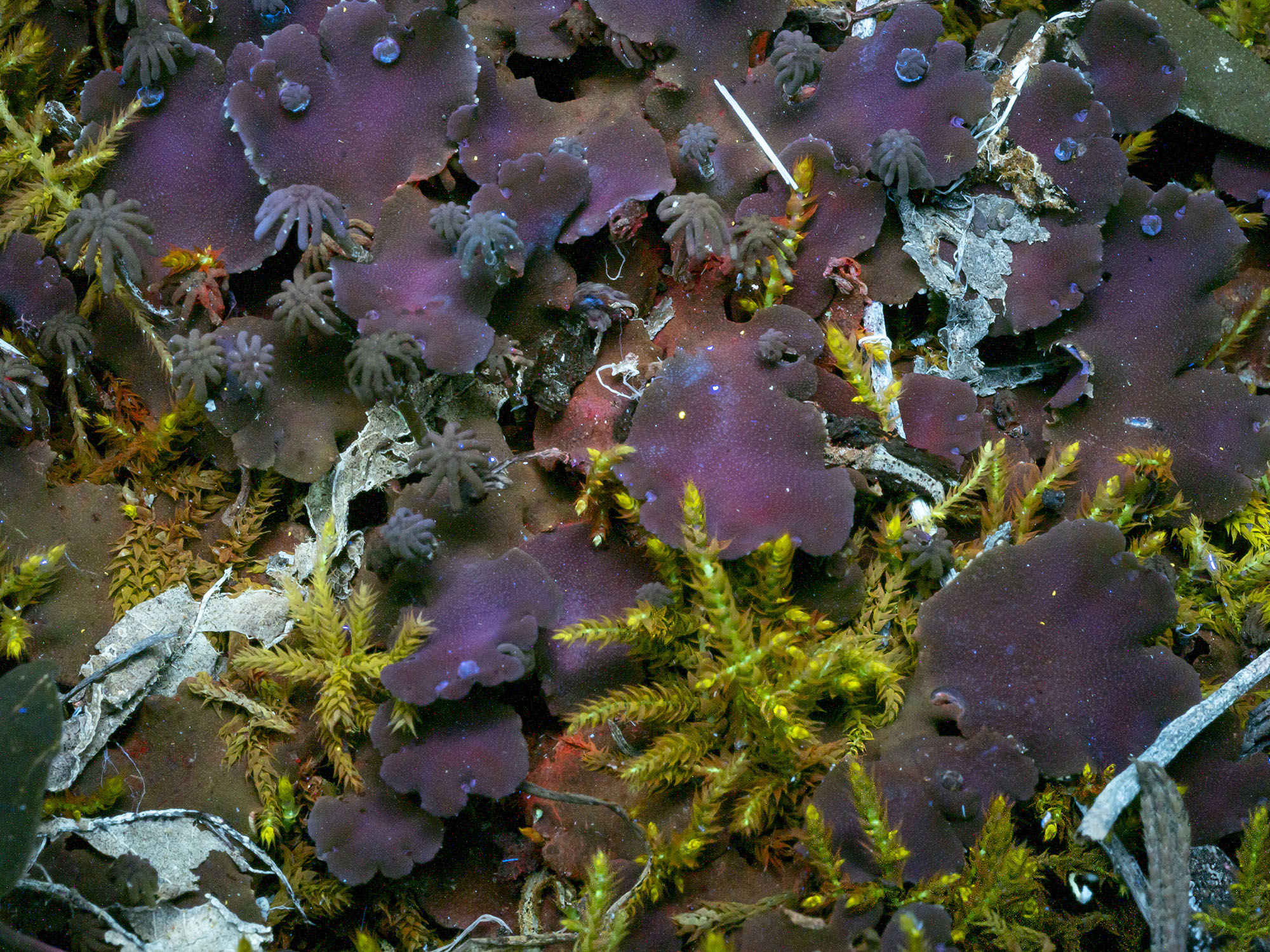 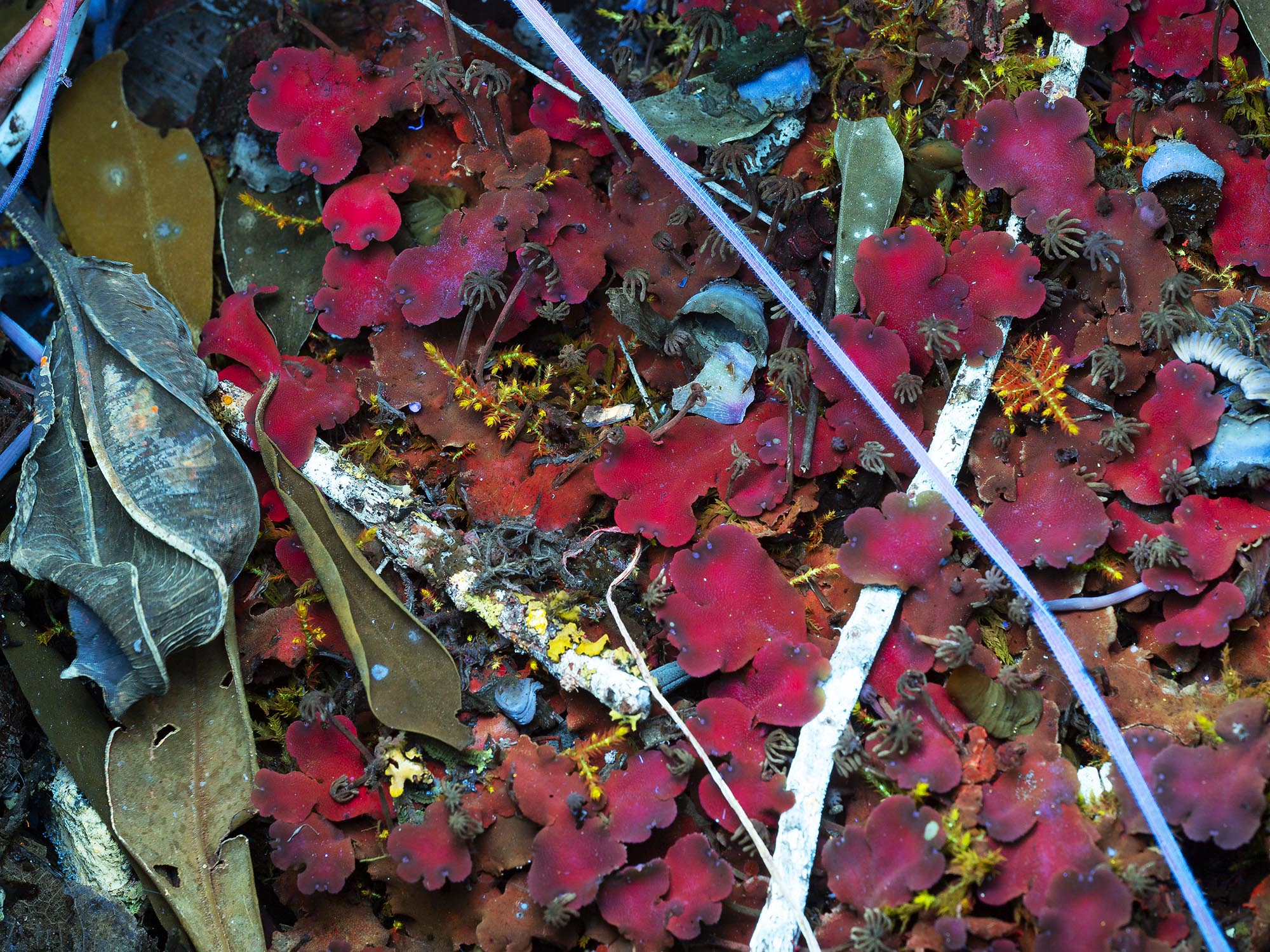 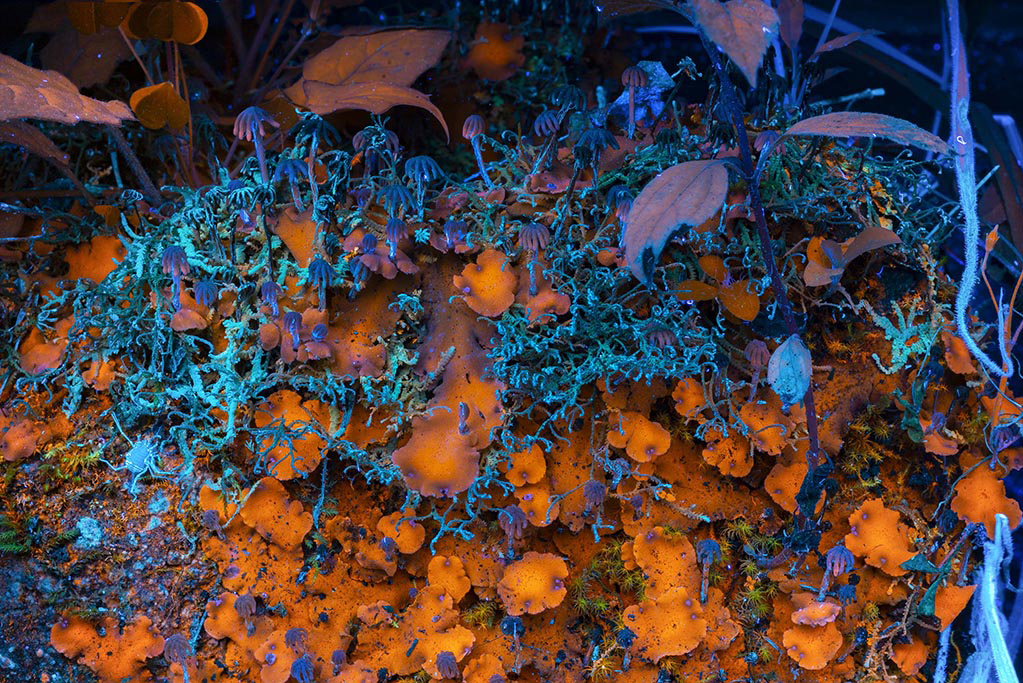 Ferns are also spectacular. This is a single fern  “leaflet”, glowing red, while its spores and their “housings” (sori) glow purple-blue. 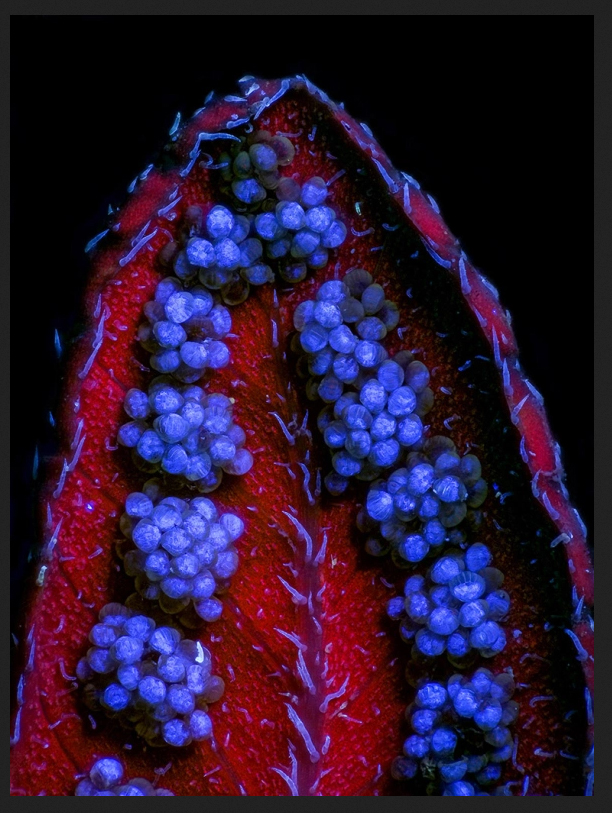 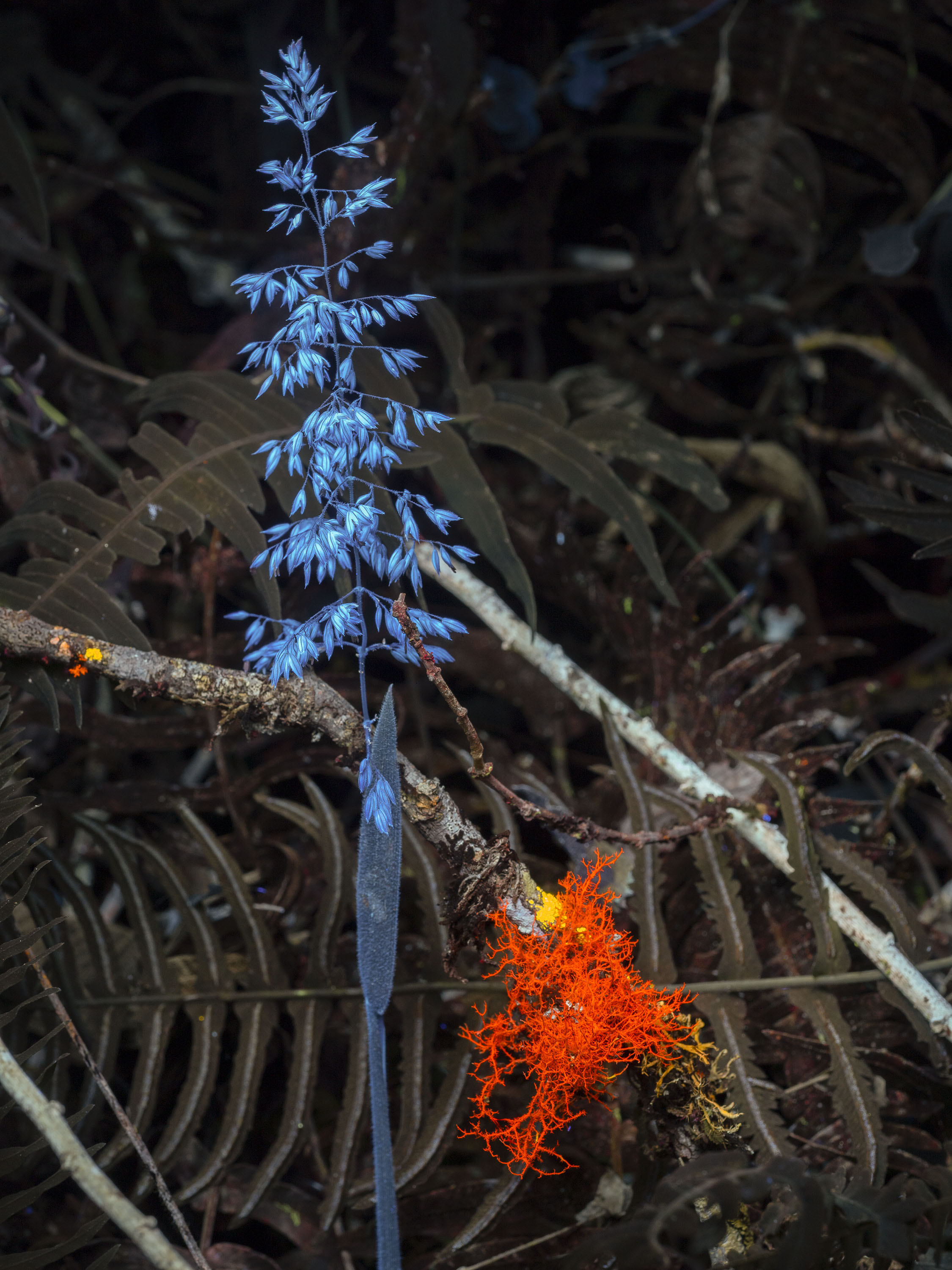 Under natural sunlight, the intensity of the red fluorescence of chlorophyll is strongly correlated with the amount of photosynthesis taking place. Since all the energy expended by living organisms in terrestrial ecosystems originally comes from photosynthesis, the intensity of the fluorescence light can tell us fundamental information– we could measure the total energy input into a given ecosystem by measuring this red fluorescence.

In real life, this seems like an impossible task, since this fluorescence is so faint. However, an interesting consequence of quantum mechanics makes it possible to actually measure chlorophyll fluorescence even from space!!!

Almost all the light that hits Earth comes from the Sun, which is surrounded by a cloud of gas made up mostly of hydrogen and helium. Because these atoms are quantum-mechanical objects, their electrons cannot have just any arbitrary energy; their energies can only have certain special values determined by their quantum-mechanical wave properties. Most photons therefore cannot be absorbed by these atoms, because the photon energies don’t match the allowed energy levels of the atoms. But the photons whose energies match the allowed energy levels of the atoms will be absorbed, raising the atom to higher energy levels. The gas cloud surrounding the sun therefore acts as a filter for the light coming out of the sun; light of certain very precise colors (energies) can’t get through this gas cloud. The same thing happens when the Sun’s light reaches Earth; the oxygen molecules in our atmosphere absorb certain very specific colors.

We’ve all seen the rainbow patterns produced when sunlight goes through a prism. The colors appear to change from red to yellow to green to blue to violet without any gaps between them. But if we looked at that rainbow pattern with a very precise instrument, we would see that there are many tiny black gaps in the rainbow pattern, and the wavelength (or color) of each gap corresponds to the allowed energy levels of the atoms and molecules of the Sun’s gas cloud and the Earth’s atmosphere. The dark lines in the rainbow pattern of sunlight were first noticed in the early 1800s, and are called “Fraunhofer lines”. Here is an exaggerated representation of them from Wikipedia:

Since the spectrum of light coming to the Earth from the Sun is (mostly) lacking these special colors, light that we find on Earth with those exact colors is (mostly) not reflected sunlight. Light of these special colors must have been emitted by the Earth itself, as fluorescence. This gives us a way to measure the fluorescence of the world from space, by looking at the amount of Earthlight that fills these gaps in the spectrum of solar radiation. Specifically, we can measure the red and infrared fluorescence of chlorophyll by finding the gaps (Fraunhofer lines) in the red and infrared parts of the solar spectrum, and measuring the amount of earthlight that fills in these gaps.

People began to realize that this was possible less than 20 years ago. It became a reality with the launch in 2009 and 2013 of satellites designed to use these principles to measure chlorophyll fluorescence. The world chlorophyll fluorescence has now been mapped. This map shows that the humid tropics (like Ecuador where I live) have the highest productivity (biological energy input) in the whole world. Of course, these are also the world’s most diverse terrestrial ecosystems. The amount of photosynthesis happening in an ecosystem is closely correlated with the amount of biodiversity supported by that ecosystem. This is probably not an accident.