NPR is the station I always have playing on my car radio, but I pay little attention to it save when I yell and rant when Krista Tippett comes on at 7 a.m. Sunday morning as I’m on my way to buy groceries. And of course Tippett is woke as hell, not to mention unctuous and lachrymose, but I rarely listen to other shows as I use my car infrequently.

In my post on NPR’s new ethics policy yesterday, a couple of readers took time to complain about how dire NPR has become, focusing obsessively on race and gender. Well, that’s what the New York Times and Washington Post do as well, so I’m not surprised, but I can’t vouch for NPR myself. One reader, though, called my attention to a new piece by Matt Taibbi about the decline of the station. Although Taibbi was described as a “center left journalist”, he really does a number on the lefty NPR—a column as funny and scathing as any I’ve seen lately. I’d reproduce it in its entirety, but that wouldn’t be fair, so click on the link below to read his short demolition of the station. I’ll give a few quotes to show the tenor of the piece. 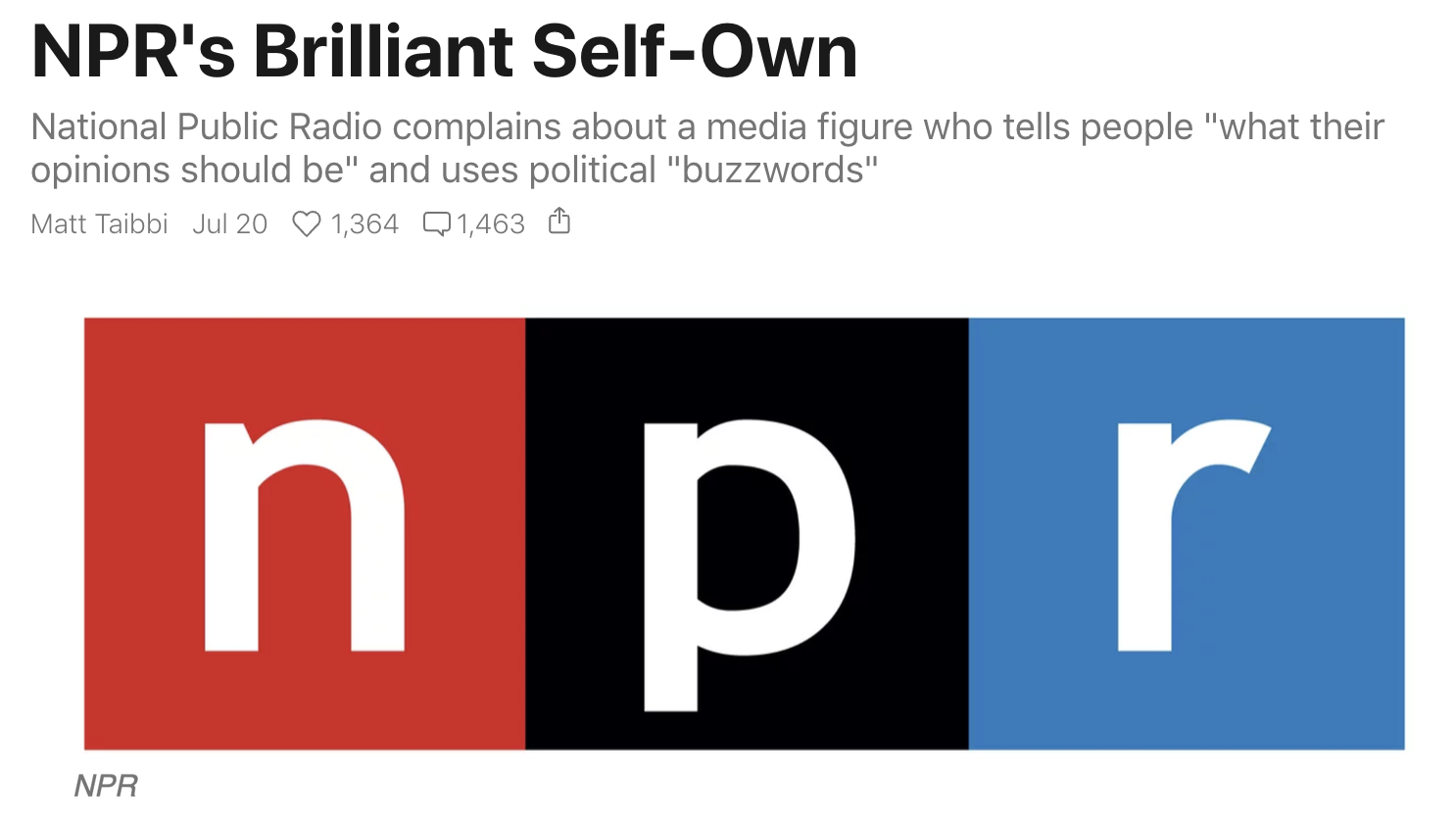 Taibbi begins by showing how NPR denigrates conservative Ben Shapiro in its recent article “Outrage As A Business Model: How Ben Shapiro Is Using Facebook To Build An Empire”—not for being fake news, but for polarizing the media AND being too popular. Here’s a graph from NPR of Facebook engagement (monthly likes, shares, and comments per article) of Shapiro’s “The Daily Wire” site compared to five mainstream media (The New York Times, The Washington Post, NBC News, CNN, and Fox News, along with four conservative sites (Shapiro’s Daily Wire, Breitbart News, The Blaze, and the Western Journal).  The Daily Wire tops them all by far. That doesn’t sit well with the liberal folks at NPR. 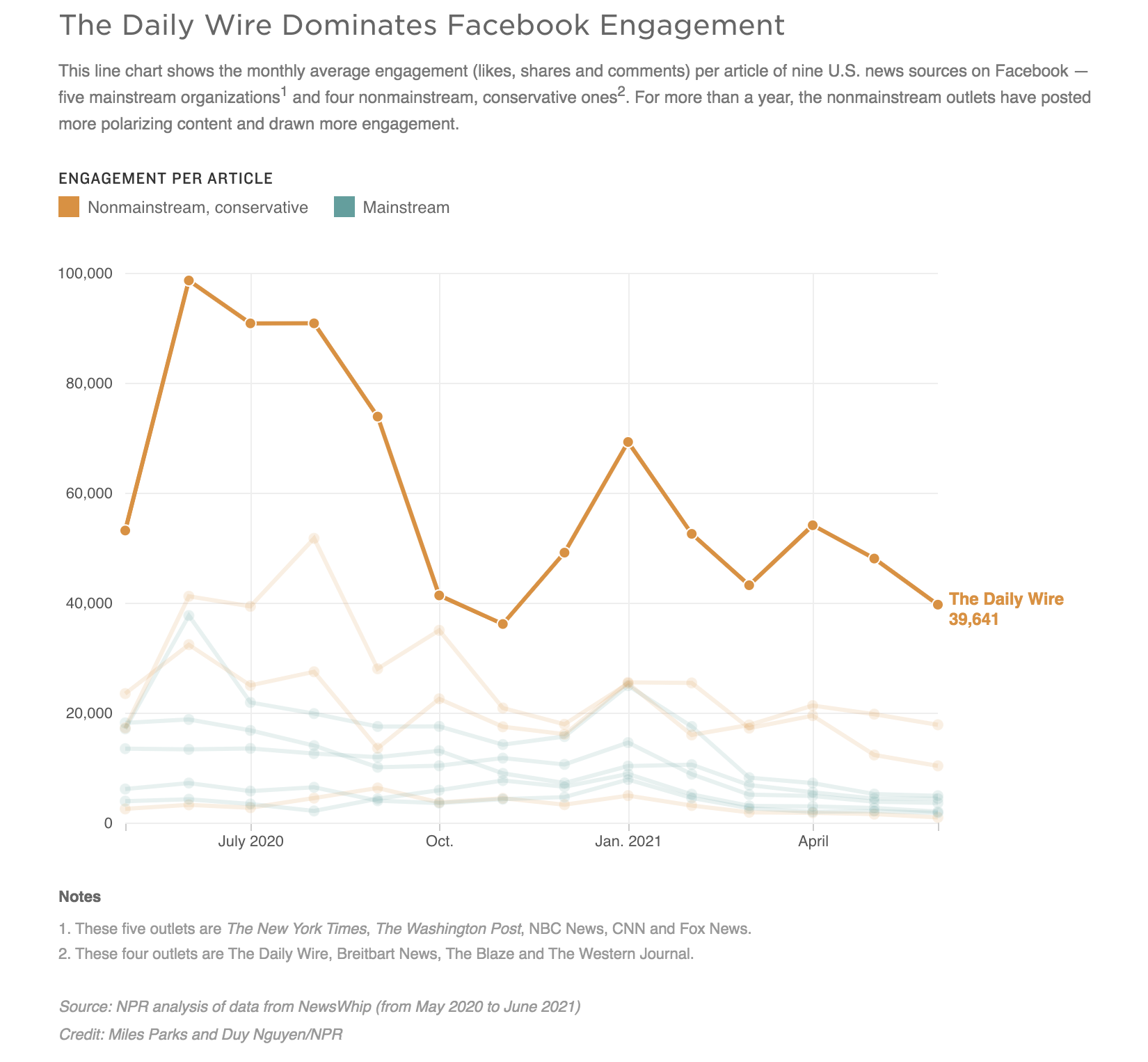 Here’s a quote from the NPR piece followed by Taibbi’s ascerbic remark:

“. . . by only covering specific stories that bolster the conservative agenda (such as negative reports about socialist countries and polarizing ones about race and sexuality issues) and only including certain facts, readers still come away from The Daily Wire’s content with the impression that Republican politicians can do little wrong and cancel culture is among the nation’s greatest threats.”

NPR has not run a piece critical of Democrats since Christ was a boy. Moreover, much like the New York Times editorial page (but somehow worse), the public news leader’s monomaniacal focus on “race and sexuality issues” has become an industry in-joke. For at least a year especially, listening to NPR has been like being pinned in wrestling beyond the three-count. Everything is about race or gender, and you can’t make it stop.

Taibbi notes that now even progressive people in the media can’t stand the nonstop wokeism on NPR (and please, readers, don’t tell me that the Republicans are worse than the Woke, as I already know that). Taibbi gives a list of recent NPR reports, accompanied by his own ascerbic comments:

“Billie Eilish Says She Is Sorry After TikTok Video Shows Her Mouthing A Racist Slur.” Pop star caught on tape using the word “chink” when she was “13 or 14 years old” triggers international outrage and expenditure of U.S. national media funding. [JAC The article doesn’t mention the c-word, so Taibbi either has inside information or sussed it out.]

“Black TikTok Creators Are On Strike To Protest A Lack Of Credit For Their Work.” White TikTok users dance to Nicky Minaj lyrics like, “I’m a f****** Black Barbie. Pretty face, perfect body,” kicking off “a debate about cultural appropriation on the app.”

“Geocaching While Black: Outdoor Pastime Reveals Racism And Bias.” Area man who plays GPS-based treasure hunt game requiring forays into remote places and private property describes “horrifying” experience of people asking what he’s doing. [JAC: preferential questionins of blacks is a real problem, but there is article after article about the problem occurring in specific instances, like geocaching and birdwatching. How many more of these do we need?]

“Broadway Is Reopening This Fall, And Every New Play Is By A Black Writer.” All sevennew plays being written by black writers is “a step toward progress,” but critics “will be watching Broadway’s next moves” to make sure “momentum” continues.

“She Struggled To Reclaim Her Indigenous Name. She Hopes Others Have It Easier.” It took Cold Lake First Nations member Danita Bilozaze nine whole months to change her name to reflect her Indigenous identity.

“Tom Hanks Is A Non-Racist. It’s Time For Him To Be Anti-Racist.” Tom Hanks pushing for more widespread teaching of the Tulsa massacre doesn’t change the fact that he’s built a career playing “white men ‘doing the right thing,’” NPR complains. [JAC: This gets the Pecksniff Award for the lot.]

Mixed in with Ibram Kendi recommendations for children’s books, instructions on how to “decolonize your bookshelf” and “talk to your parents about racism” (even if your parents are an interracial couple), and important dispatches from the war on complacency like “Monuments And Teams Have Changed Names As America Reckons With Racism, Birds Are Next,” “National” Public Radio in the last year has committed itself to a sliver of a sliver of a sliver of the most moralizing, tendentious, humor-deprived, jargon-obsessed segment of American society. Yet without any irony, yesterday’s piece still made deadpan complaint about Shapiro’s habit of “telling [people] what their opinions should be” and speaking in “buzzwords.”

Oy gewalt! I’m going shopping in a few minutes so I’ll listen for myself, but the drive is only ten minutes. Taibbi concludes, not mincing words, that “NPR sucks and is unlistenable, so people are going elsewhere. And they’re jealous of Ben Shapiro!

I”ll have to investigate this Taibbi fellow. . .

And NPR just had the news.

27 thoughts on “Matt Taibbi on the decline of NPR”