Patrick Wack, a photographer, has a book coming out called Dust, which combines essays about Xinjiang with Wack’s own photographs taken in the province between 2016 and 2019. As I’ve reported recently, and you should know already, China is in the process of dismantling the culture of the local Uyghurs (a Muslim people) in Xinjiang, with 1 million out of 6 million Uyghurs living in “reeducation camps”, which involve propaganda, forced labor, and even torture. The entire province is subject to minute scrutiny by China, with cameras everywhere, searches if you go into public places, and apps on phones that record your every click and call. You can be sent to a camp for a minute “infraction”, like getting a telephone call from overseas. Mosques are being destroyed and burial grounds covered with new buildings.

This is much like the takeover of Tibet by the Han Chinese and the destruction of Tibetan culture I sensed when I visited there a few decades ago, all done to assure the hegemony of China’s one true religion: Communism. The tension between the Tibetans and the incoming Han was palpable; often a Tibetan would pull me into a corner and ask me if I had any pictures of the Dalai Lama (these are forbidden).

There’s a really intriguing interview of Wack by Suzy Weiss on Bari Weiss’s site this week, which documents not only the changes Wack has seen over the past few years in Xinjiang, but also the censorship of his photos by Kodak lest they offend the Chinese. Wak’s photos don’t really show obvious repression of the Uyghurs, since Wack is not allowed to depict that, but it hints at it. I’ll show a few of them. 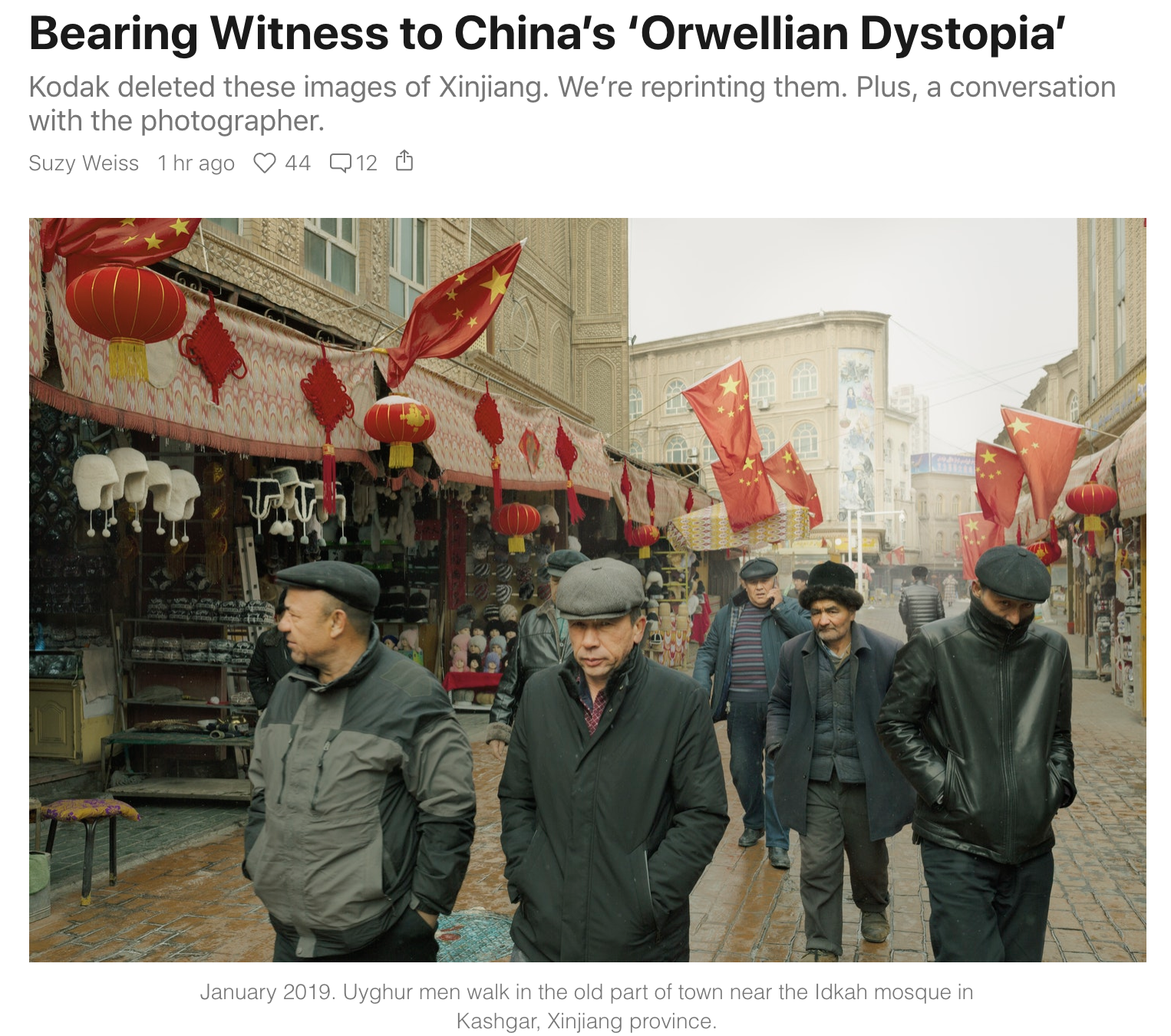 You can see more pictures from the book here.

First, what Kodak did, also documented by the New York Times. Excerpts from the interview are indented.

Earlier this month, Patrick Wack got a boost any photographer would dream of when Kodak’s Instagram account — 841,000 followers and counting — decided to feature ten photographs from his forthcoming book. It’s called “Dust,” and it chronicles the transformation, over the past half-decade, of the Xinjiang region, the cradle of Uyghur civilization, at the hands of the Chinese Communist Party.

Then, a few days after Kodak shared the photos, the company deleted them.

It didn’t just delete them. It replaced Wack’s haunting pictures with its corporate logo and a statement that reads, in part: “Kodak’s Instagram page is intended to enable creativity by providing a platform for promoting the medium of film. It is not intended to be a platform for political commentary.” It went on to “apologize for any misunderstanding or offense the post may have caused.”

Instagram is banned in China, so Kodak put out an additional statement on WeChat, a Chinese social-media platform. This one was more abject:

We will keep ourselves in check and correct ourselves, taking this as an example of the need for caution.

What Weis didn’t note, but the NYT did, is this:

In the Kodak post and on his own Instagram account, Mr. Wack described his images as a visual narrative of Xinjiang’s “abrupt descent into an Orwellian dystopia” over the past five years. That did not sit well with Chinese social media users, who often object vociferously to Western criticism of Chinese government policies.

I suppose you could say that, in light of Wack’s statements, Kodak had some justification to remove the pictures, which would surely worsen their relationship with China. But I still see it as cowardly. For Kodak, though, the bottom line counts more than cultural genocide. At any rate, beyond this censorship, Wack has some interesting stuff to say about his trips to Xinjiang and the changes happening as the Han Chinese begin their cultural genocide.

Here are a few photos and Wack’s statements in the interview that characterize them.

I wanted to see how much of the repression of the minorities, and the economic segregation, I could capture. For example, the biggest industry in Xinjiang is hydro-carbons, like gas and construction. I didn’t see a single Uyghur person working there. It was all Han Chinese people. The only people you see working in the cotton fields were Uyghur. They are second-class citizens. And they are in a region that is generating so much wealth — but not for them.

I think a lot of Chinese people have no idea what’s going on in Xinjiang. Regular people who don’t speak English and only read Chinese media think the camps are training centers, and that the government is bringing modernity to backwards people so they can integrate into the Chinese dream of this great, modern society where everyone has a car and a flat.

There’s also a push from the government to send people there to eat the food, and watch girls do traditional dance or take a camel ride into the desert. They want people to think it’s stable and safe.

There are busloads of Han Chinese tourists coming in to see this idyllic version of Xinjiang which is just about the folklore. They’re going to theme parks, or ethno-parks, and ten kilometers away you have camps where they are trying to brainwash and annihilate the culture of the Uyghurs. I found it perverse, the two realities of this Potemkin Village version of Xinjiang with what was really happening.

You describe your work as a “visual narrative of the region and as a testimony to its abrupt descent into an Orwellian dystopia.” I’d like to know more about that descent. What were some of the most important changes you saw between your first trips to Xinjiang in 2016, and your most recent trip in 2019?

There were two major differences. The first was the increase of the police on the ground. In 2016, it was a highly-surveilled region. By 2019, it had become an open air prison filled with police. The officers are all Uyghur people, and they are checking you all the time. You have to go through a body scan and security, just like when you go through an airport, but whenever you enter any public place at all, like a bazaar or a supermarket.

There’s also the surveillance you can’t see. There are devices that check the content of phones and apps that record everything. And the cameras are absolutely everywhere.

The second major change was in the landscape. The women were not wearing their veils anymore. Any symbol that was Middle Eastern or Muslim had been removed. The mosques were closed or destroyed. You couldn’t hear the call to prayer anymore in the streets.

In 2016, the mosques were filled, especially in the towns in the south of the region, which is the cradle of the Uyghur people.In 2019, I didn’t see a single person going to the mosque to pray. Some mosques were open, but only as tourist sites. I also saw a gap in the demographics in the region. There were fewer men in their twenties, thirties and forties out in the streets. My impression was that they were in the camps, but it’s hard to know for sure. That’s what I felt. There was tension and weight all around. Something grim.

At the end, Wack questions whether the Olympics should be held in Beijing next year (winter games), comparing them to the 1936 Olympics in Hitler’s Germany and adding that, “If a stand is going to be taken, it should be now.” That’s a bit hyperbolic, and of course they won’t cancel the games. But the world needs to know more about what’s going on in Xinjiang.

16 thoughts on “Kodak deletes pictures of Xinjiang, but it’s too late: Bari Weiss’s site publishes them”