I put a question mark in the title because although the evidence for cultural evolution in Australian sulphur-crested cockatoos (Cacatua galerita) is pretty strong, the authors are missing a crucial piece of evidence. Read on.

The paper below (click on screenshot, or find the pdf here) was just published in the prestigious journal Science, and got tons of airplay in the media. And I can see how the observation of cockatoos learning to open garbage bins, and then other cockatoos imitating the first ones, leading to learning and then diffusion of the behavior rapidly around Sydney, is cool.  After all, it mimics how humans learn and transform their culture by imitating others. And, like humans, cockatoos in different areas modify the learned behavior, with different populations opening the bins in different ways.

But given the previous literature on cultural evolution in animals, and in birds, I was surprised that this paper got so much publicity. The authors do have rapid evidence for cultural spread of a trait in only a year, but no direct evidence that the birds learn to open bins by watching and imitating others. (Another theory—admittedly less likely—is that birds see open bins and, noticing that there’s food inside, learn to open other bins on their own. That could also lead to rapid spread of the trait, but not by watching and imitating others.)

But already in the 1950s there was a similar observation from the UK: several species of tits learning to peck open milk bottles delivered to doorsteps, and then drinking the cream from the top of the bottles. That behavior, too, spread rapidly (see below) but there’s not the mathematical-model evidence to suggest spread through cultural learning. However, in that case there were direct lab experiments showing that one tit can indeed learn to open the bottles by watching another: the kind of evidence not cited (and apparently missing) in the cockatoo paper.

In none of the journalists’ reports on this phenomenon have I seen any reference to the much earlier work on tits (several species of them), despite its similarity to the present study and the direct evidence of imitative learning. I ascribe this lacuna to journalists’ ignorance of the scientific literature. For the study of Fisher and Hinde on tits opening milk bottles is very famous among behaviorists, ornithologists, and organismal biologists (it’s cited in the new Science paper, but just as a number without comment). In those days, though, it was published in more obscure journals like British Birds, though there were two short News and Views pieces in Nature.

On to the cockatoo study: click on screenshot. I’ll try to be brief:

Before 2018, there were sporadic reports of the cockatoos opening trash bins near Sydney to get food. Here’s a photo of one bird that’s been marked with paint for identification. (By the way, these birds have been described as a cross between a bolt cutter and a car alarm.) 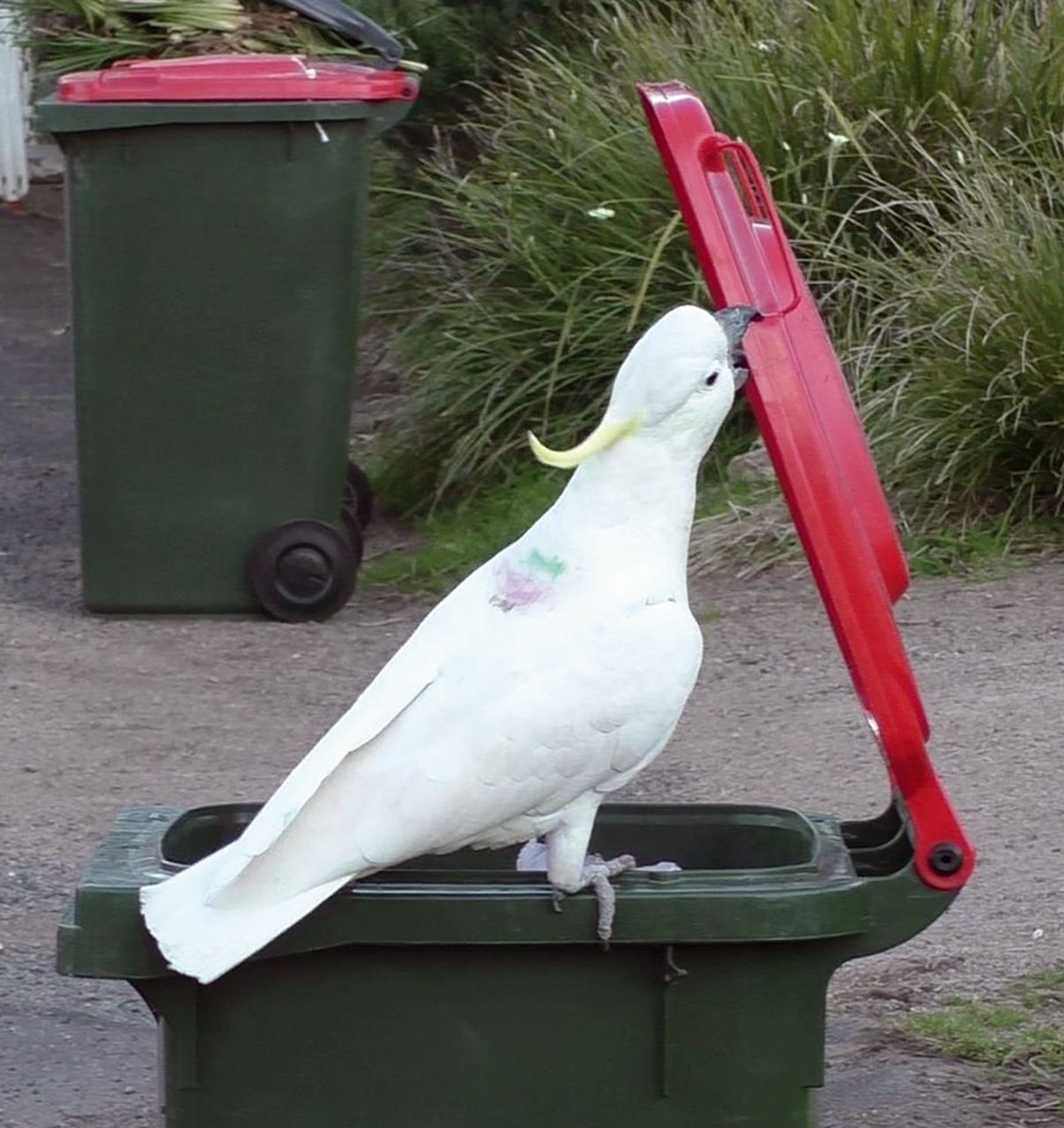 The behavior involves at least five separable actions, as shown below.

But although they have to be performed in sequence, each behavior save “pry open” and “flip” can be done in several different ways, so the number of sequences are many. A given bird tends to open the bin in a characteristic way. Here are the sequences: 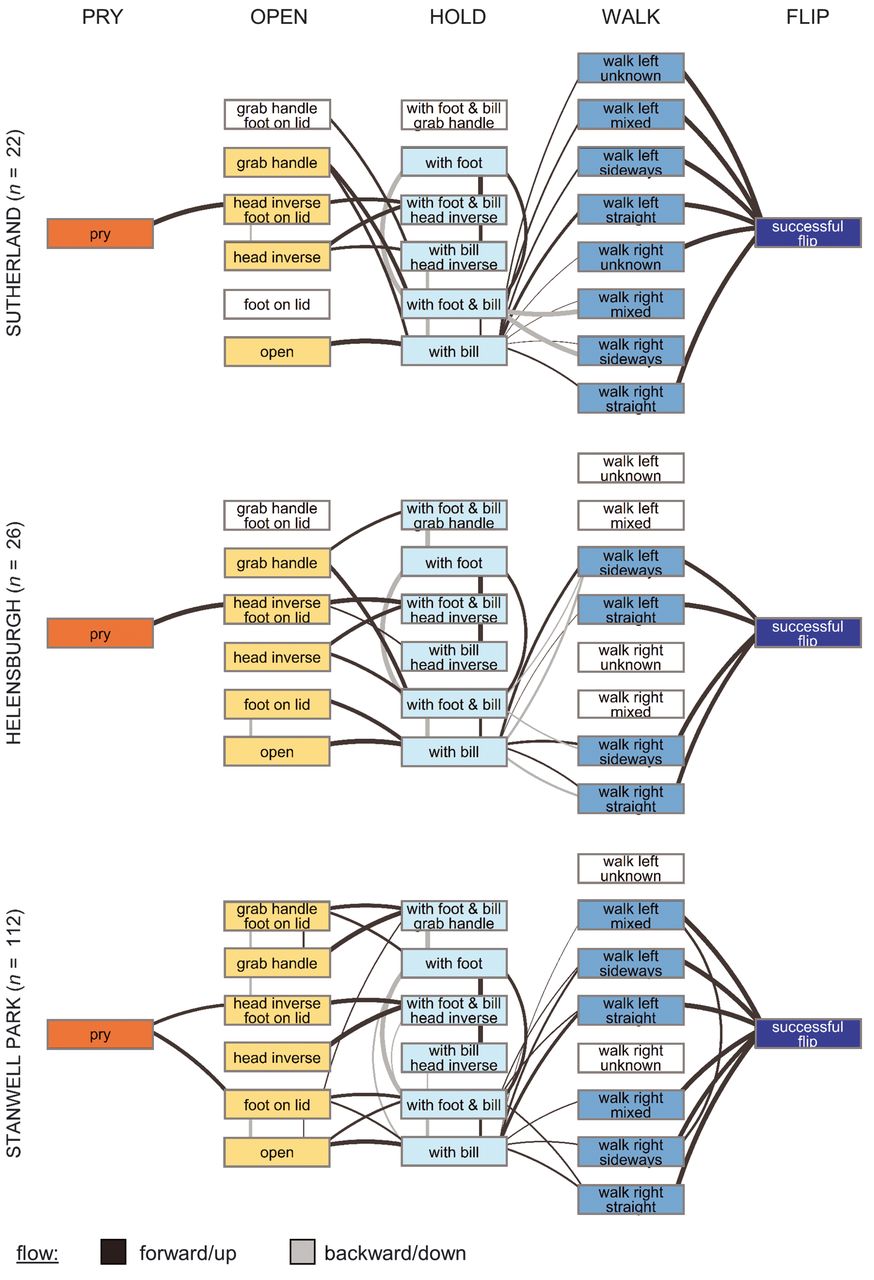 And here’s are two different birds holding the top in different ways, the first one with the beak and the second with the foot and the beak. 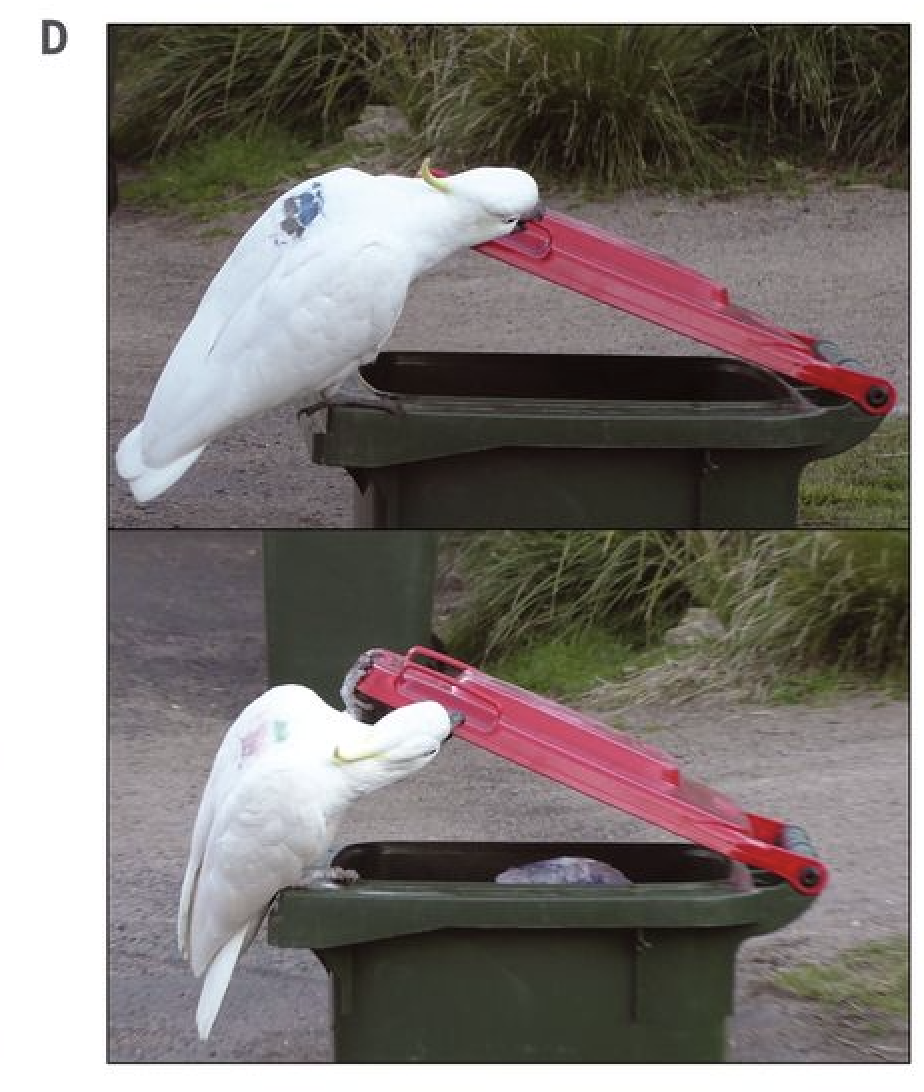 This plot shows the rapid spread of the trait around Sydney. See the caption for explanation, but realize that this is only within a few years (the color of the bars show the number of bin-opening observations).

The spread, as with the tits drinking milk, was documented by reports of citizens and ornithologists. In the case of the cockatoos, there were 1396 reports of which 338 in 44 suburbs described bin opening. Multiple birds were present in 93.3% of the openings, suggesting the possibility that the cockatoos were learning to open bins by watching others.

To determine if the behavior spread by culture and imitation, the authors combined the known times of bin-opening observations with their geographic location and compared a model in which the birds independently learned to open the bins with one involving imitation and geographic spread. (One would expect, for instance, that in the latter model observations of bin opening would be more geographically contiguous as the behavior spread from bird to nearby bird.) Sure enough the “network models with social transmission” got overwhelmingly stronger statistical report than any other model, implying learning by imitation and spread by flight.

A few other points. As I said, individual birds tended to use a characteristic sequence of bin-opening moves; that is, the variance among openings within individuals was less than the variation among individuals, even from the same area.

Second, different geographic populations tended to develop different ways of opening bins, though it was no means uniform within a location.  And the farther the regions were apart, the more different the behavioral sequences of bin-opening. This is just like human culture. Languages, for example, developed in exactly this way: individuals migrated and, over time, people’s imitations of others’ way of speaking led to characteristic linguistic differences between regions—up to the point of mutual unintelligibility.

Finally, unlike the tits (see below), it was largely the male cockatoos who opened the bins (89%), and those birds who succeeded tended to be higher in the dominance hierarchy than those who failed or who didn’t try.

That experiment was in fact done for the blue tits in a very clever experiment by Aplin et al. (see reference at bottom), using containers sealed with either foil or paper (just as milk bottles were sealed), but containing waxworms instead of milk.

On to the famous observational paper by Fisher and Hinde from 1949 (reference and link at bottom, click on screenshot to get pdf).

Great and blue tits opening milk bottles to get the cream was a behavior first described in 1921 in Southampton. The birds would either pry up the lids or, if they were foil, peck a hole in them to drink the cream. Here’s some adorable pictures given in the paper: 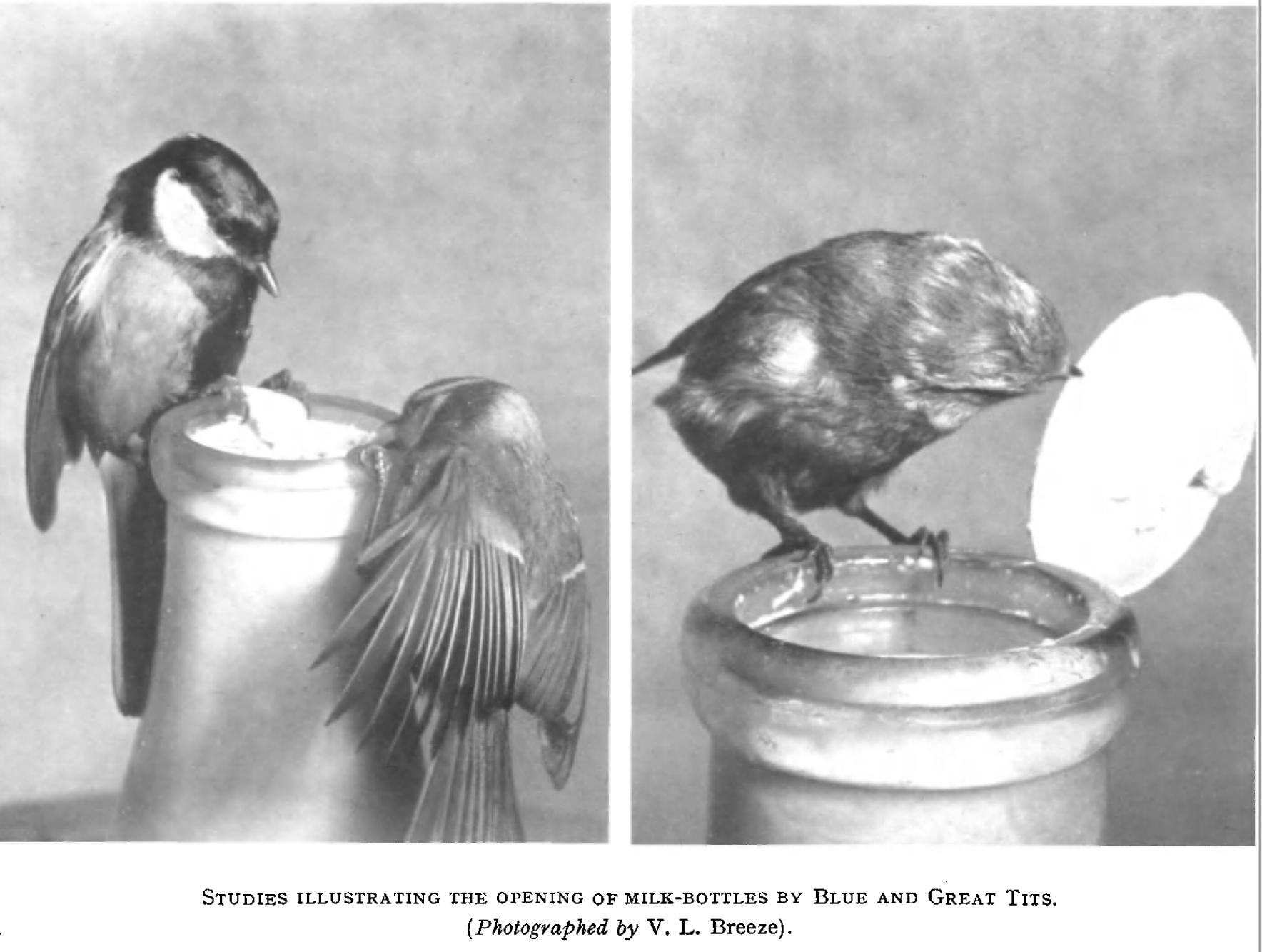 There’s a cute anecdote described in the paper:

The bottles are usually attacked within a few minutes of being left at the door. There are even several reports of parties of tits following the milkman’s cart down the street and removing the tops from bottles in the cart whilst the milkman is delivering milk to the houses.

A few birds drank the cream so eagerly that they stuck their heads too far in and drowned! 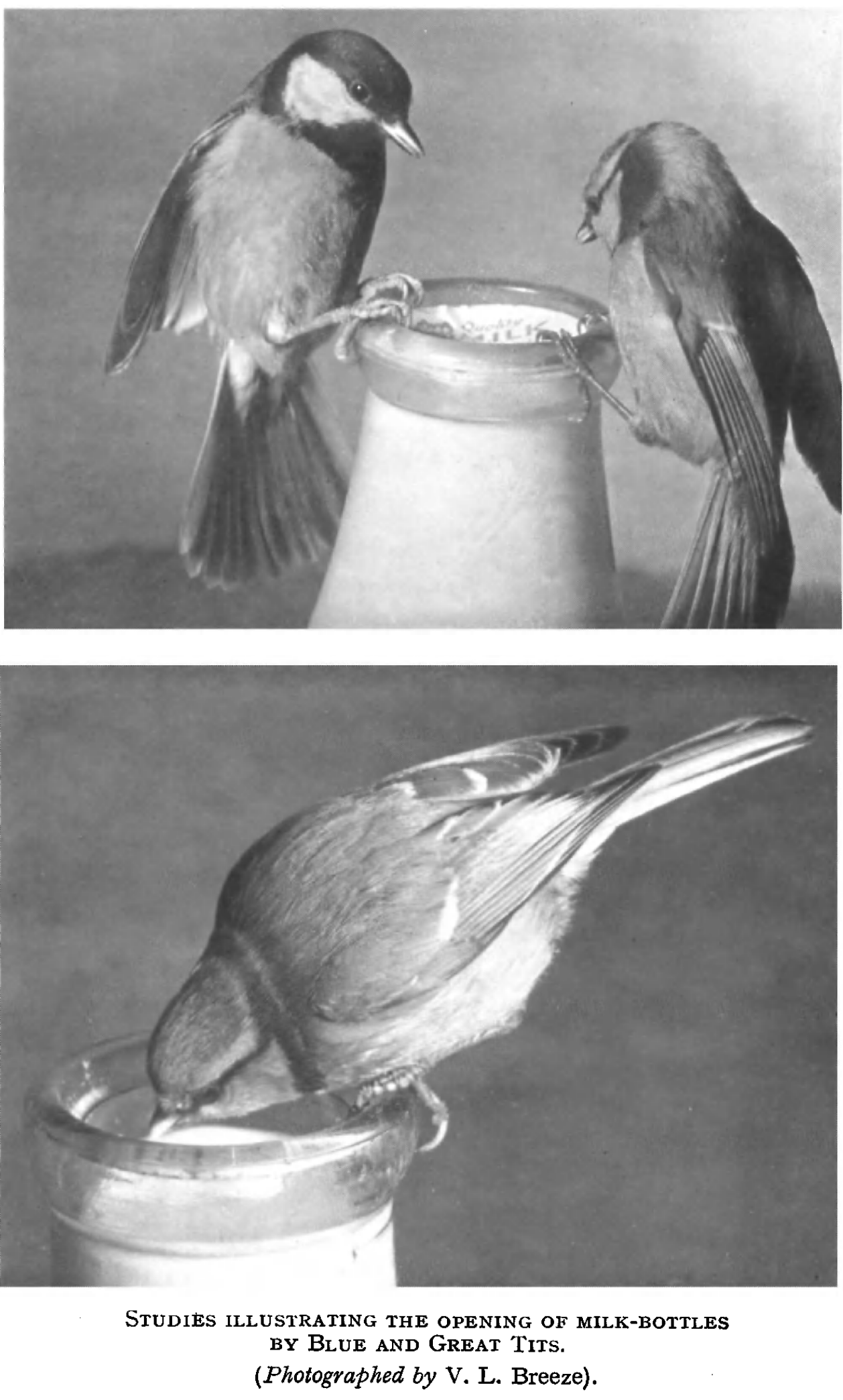 The authors note that the trait spread rapidy throughout Britain, and give maps of reports of milk-drinking tits from several years. I show just three: 1939, 1943, and 1947. Each dot is a bottle-opening observation: 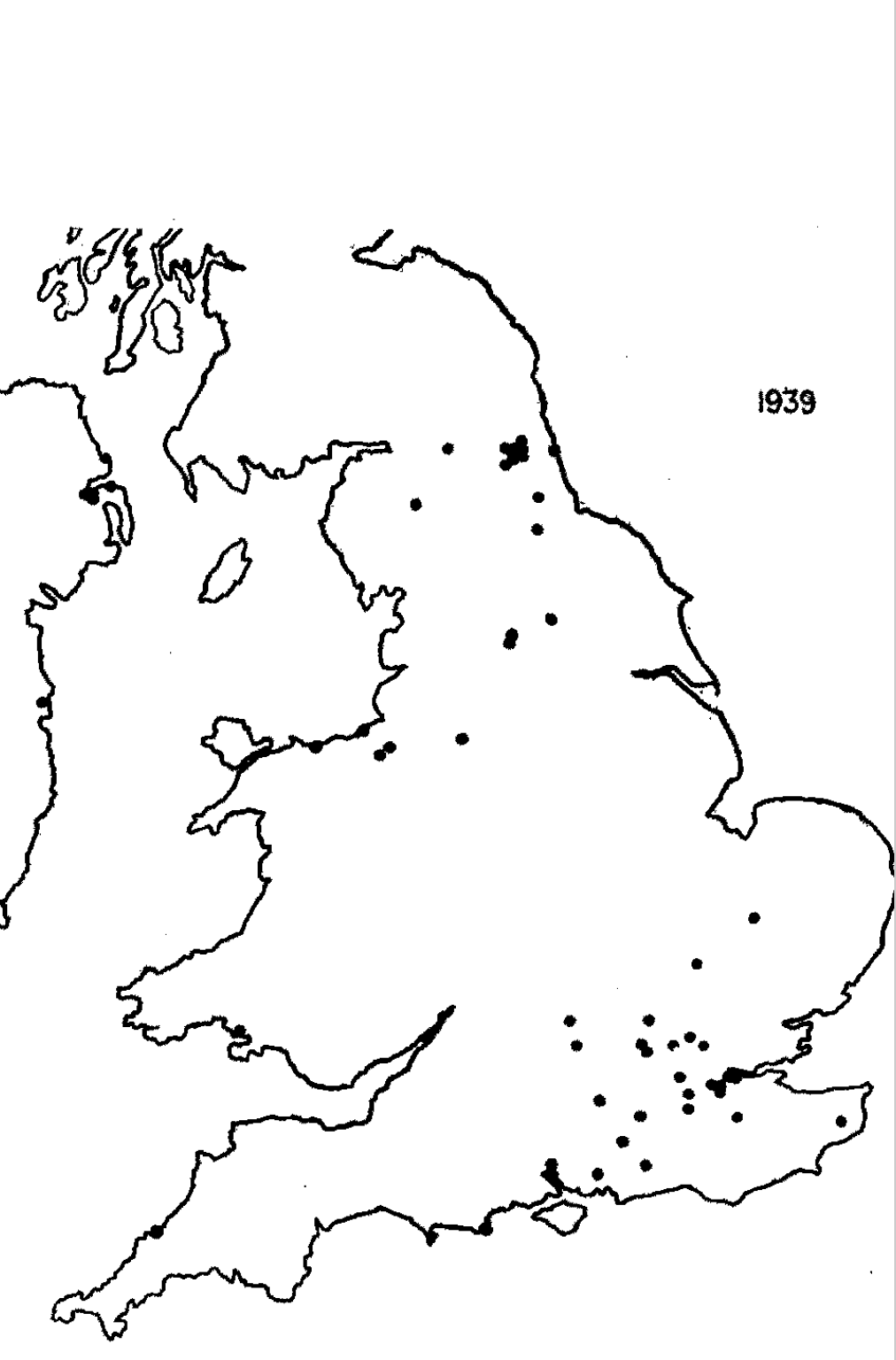 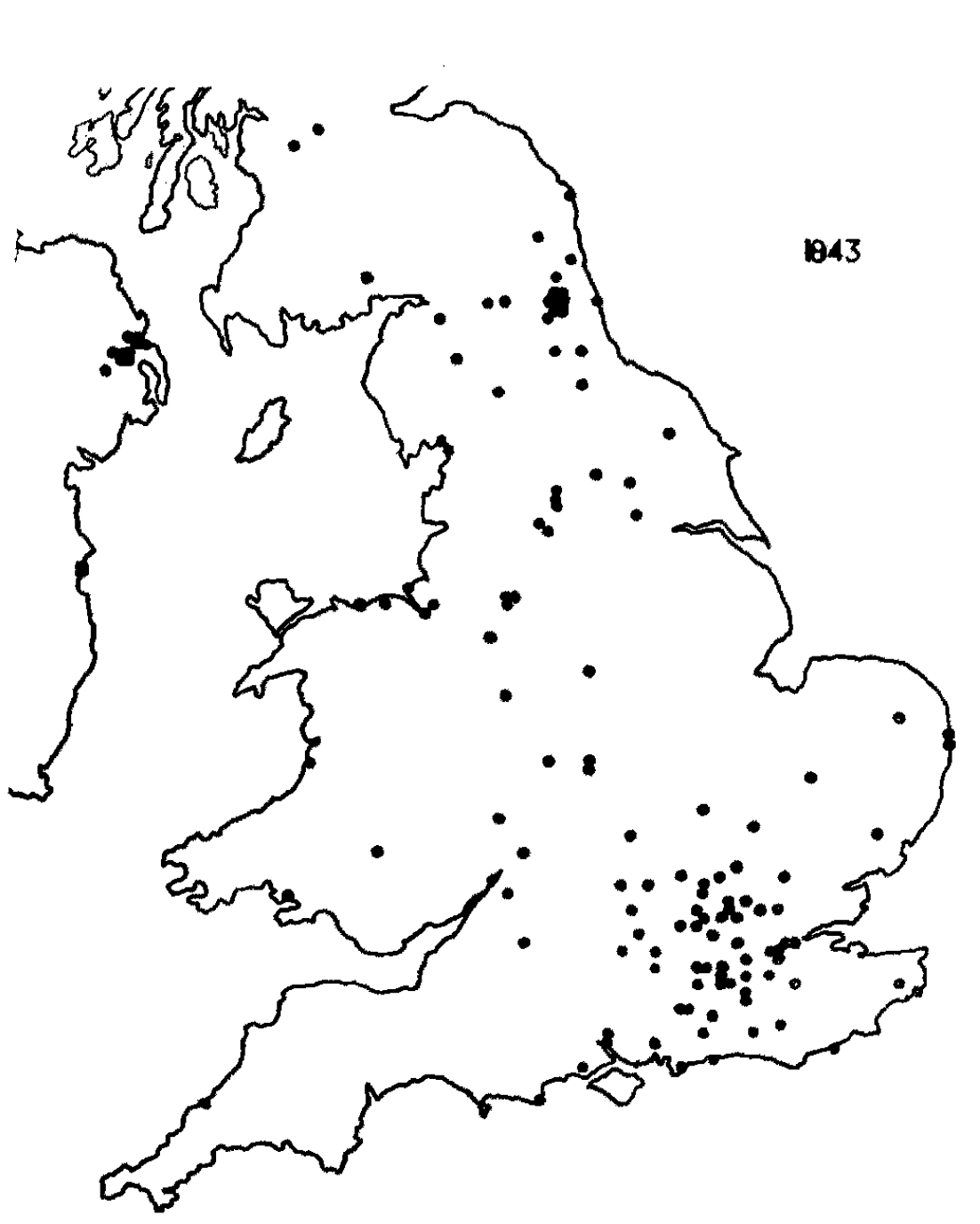 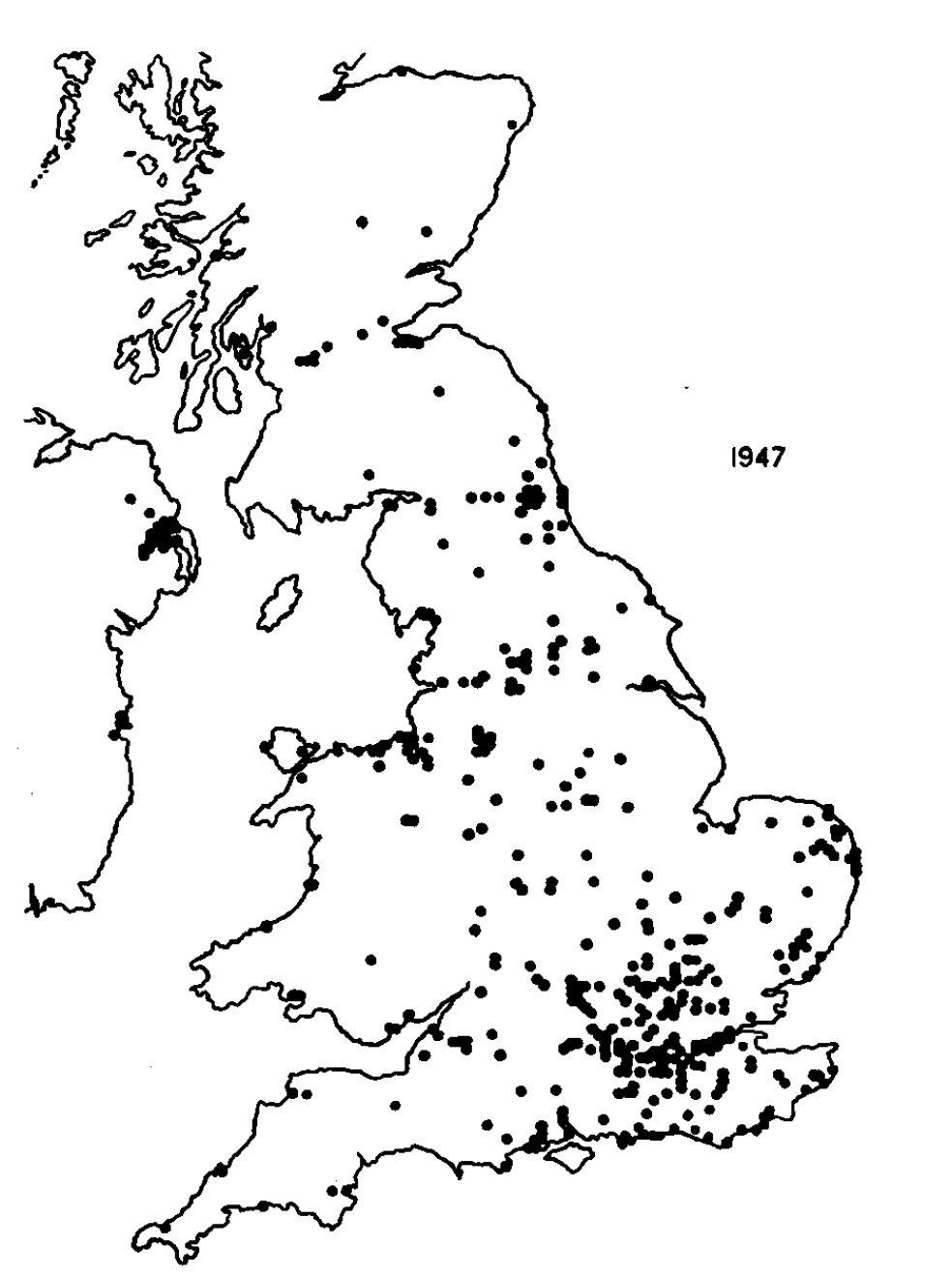 Here the authors made no mathematical models of the spread, but adduce two arguments that this is due to learning through observation. First, very few cases were reported in isolated areas, where individuals would learn it for themselves (tits don’t fly very far). Second, most observations made after 1930 are near the pre-1930 localities or occur in regions where isolated openings were first observed earlier. Further, the observations increased much more rapidly over time than expected if each bird was learning to open a bottle by itself. As the authors say, “This does seem to support the view that, when the habit has been acquired by one tit, it can then be spread through the population by some form of imitation or learning.”

Confirmation of the last view came in 2013 by Aplin et al. in a complicated experiment involving capturing wild birds, training some to open foil compartments containing waxworms (a favorite treat) and others to open compartments covered with cardboard, as some milk bottles are. They then exposed naive birds to the “demonstrators” by having the naive ones watch the acquisition of waxworms by a “demonstrator” in an adjacent cage.

The results were conclusive: not only did the naive birds learn to open the compartments much more quickly and efficiently than naive birds not watching the demonstrators, but they opened them the same way the demonstrators did: piercing the foil covers and flipping the cardboard ones. Here’s a photo of the apparatus from the paper. Bird (a) is being trained on foil, bird (b) on cardboard:

Clearly the wild-caught tits, at least in the lab (they were released after being tested) learn to pry open lids by watching other tits. This strongly implies that the spread of the trait described by Fisher and Hinde involves a considerable amount of “social learning.” Curiously, it was the female tits who were best at learning, and the subordinates more than the dominant birds—the opposite of the cockatoos.

The upshot: Birds are clearly capable of learning through imitation and spreading what they’ve learned to others, especially when the object is to get food. In the cockatoo paper there’s indirect evidence for social learning from a mathematical model, while in the tit experiment there is direct evidence for social learning from lab observations (but not, like the cockatoos, in “nature”). The cockatoo experiment also shows geographic variation in culture, while I don’t recall any mention of geographic variation of how tits open milk bottles, though that may well be present if in some areas the bottles tend to have cardboard lids while in others they use foil.

What bothers me most is the many reports about this in the press, reports that neglected cultural learning and spread not only in other species but in BIRDS—the tits, which is a remarkably similar study of learning by imitation to get human food in an urban environment. The lesson: science writers need to dig deeper into their stories or, preferably, have a degree in biology.

31 thoughts on “Cultural evolution in an Australian parrot (?)”