Keep those photos coming in, folks, and thanks to those several people who have answered my plea. But there’s always an aching need for more good photos!

Today we have another installment of the famous “Breakfast Crew” series from Doug Hayes of Richmond, Virginia. Doug’s captions are indented, and you can enlarge his photos by clicking on them.

Part 15 of the Breakfast Crew.  Folks who enjoy feeding birds have had a bit of a scare the past few weeks. Birds have been dying in great numbers West Virginia, Northern Virginia and several states along the east coast. No one is sure if it is a disease or the result of people spraying to control cicadas. Folks were asked to remove bird feeders and clean them and bird baths with a bleach solution until authorities get a handle on what is going on. We got the OK to resume feeding birds last week as no signs of the mystery illness has been seen in our area. All of the Breakfast Crew are healthy, in fact, we have a bumper crop of cardinals, grackles and starlings this year. There are at least six cardinal fledglings new to the yard (I don’t think they are all from the same brood) and more grackles than I can count.

A flock of house finches (Haemorhous mexicanus) mobbing the feeder. 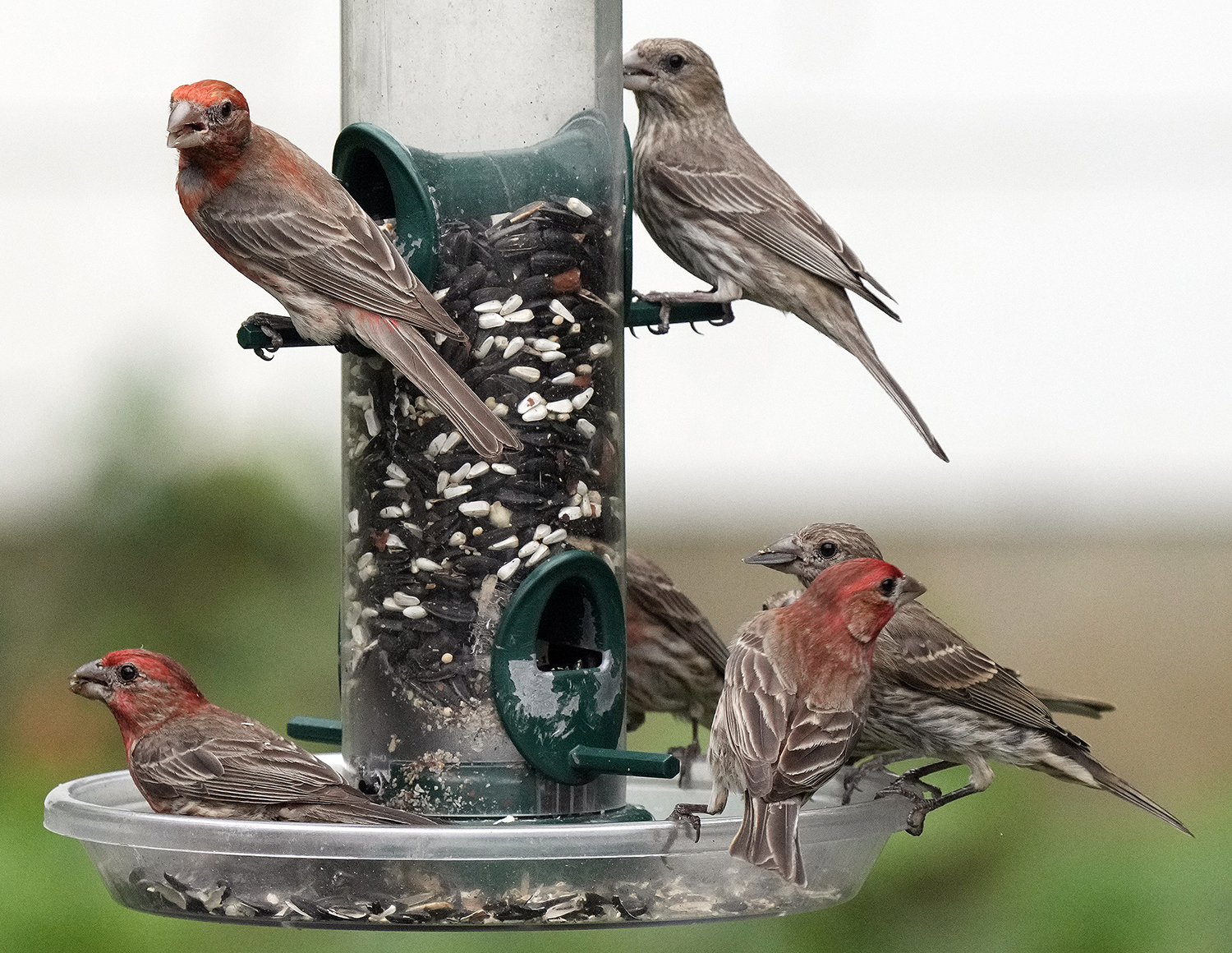 A female house finch not about to back down from this young cardinal. 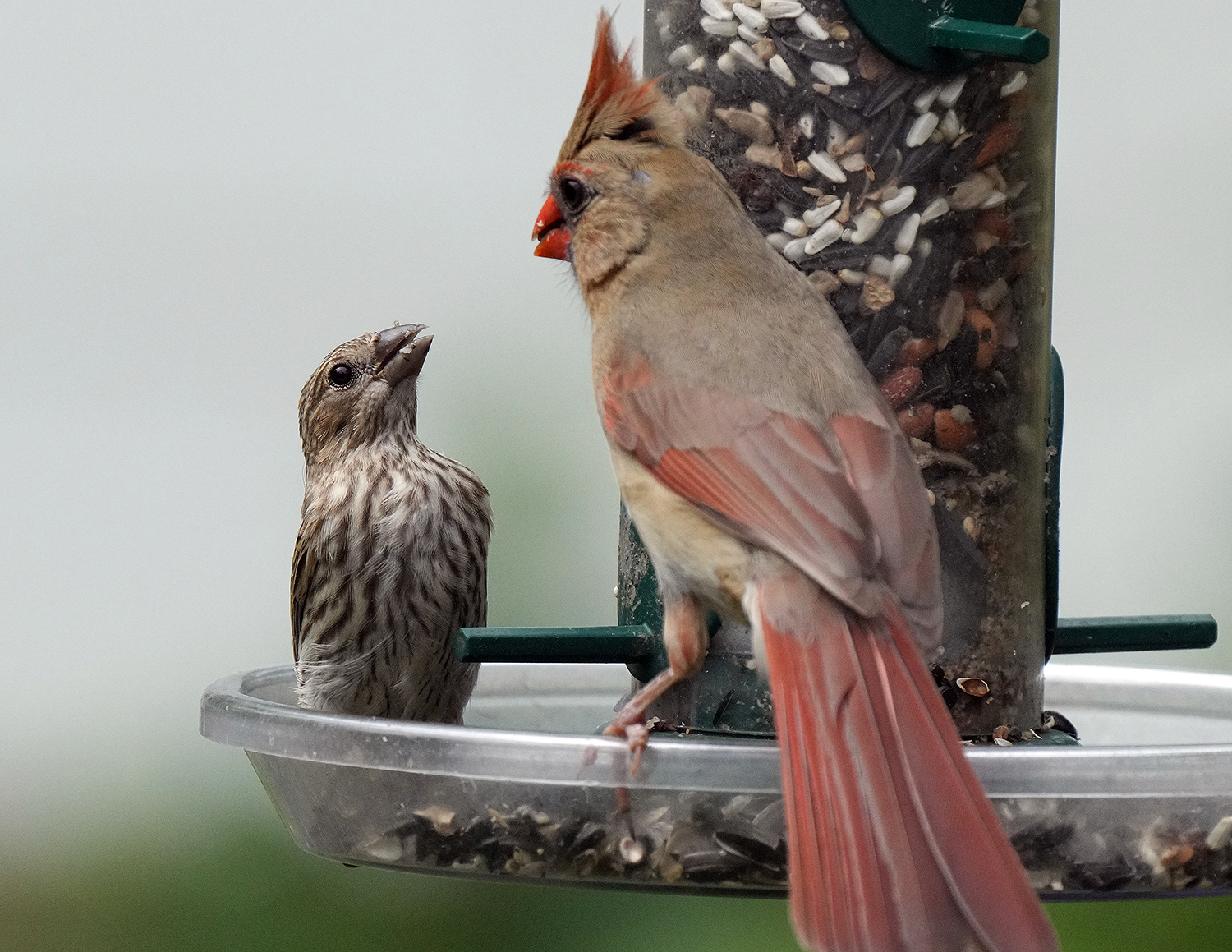 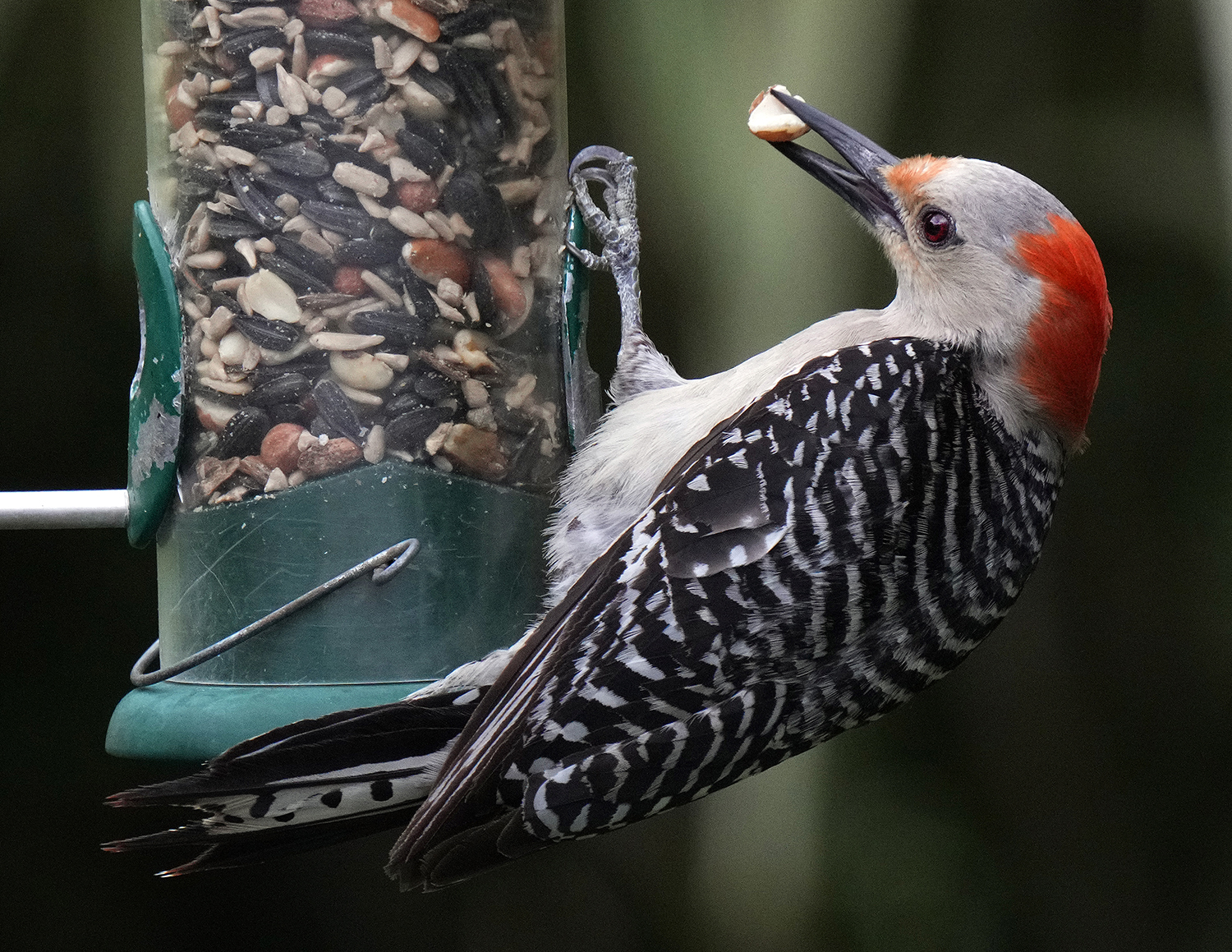 A common grackle (Quiscalus quiscula) giving me the evil eye. Most people consider them pests, but I enjoy watching them squabble among themselves over a place at the feeders, and their eyes are hypnotic! 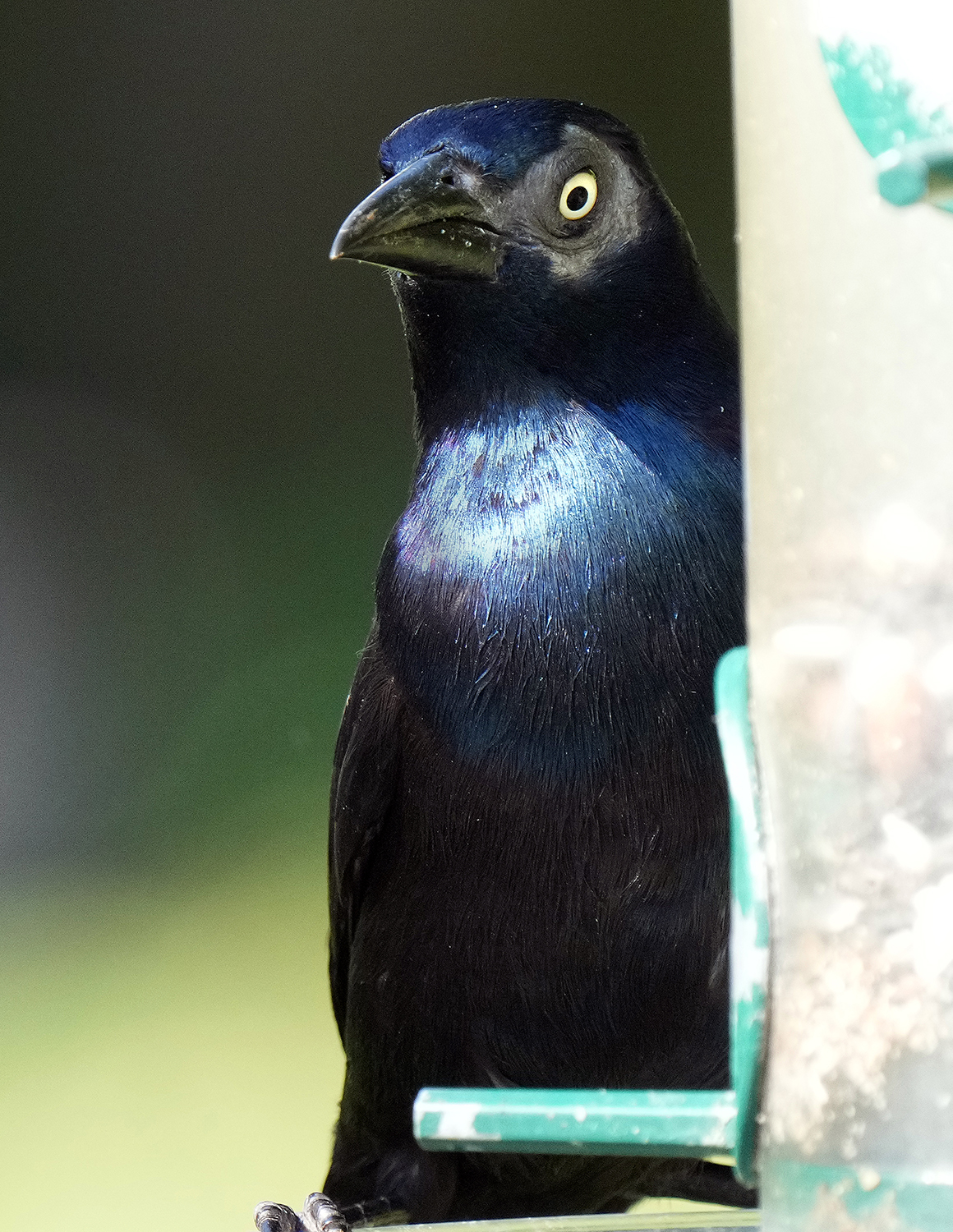 A male eastern towhee (Pipilo erythrophthalmus) scavenging for seeds with a cardinal fledgling. 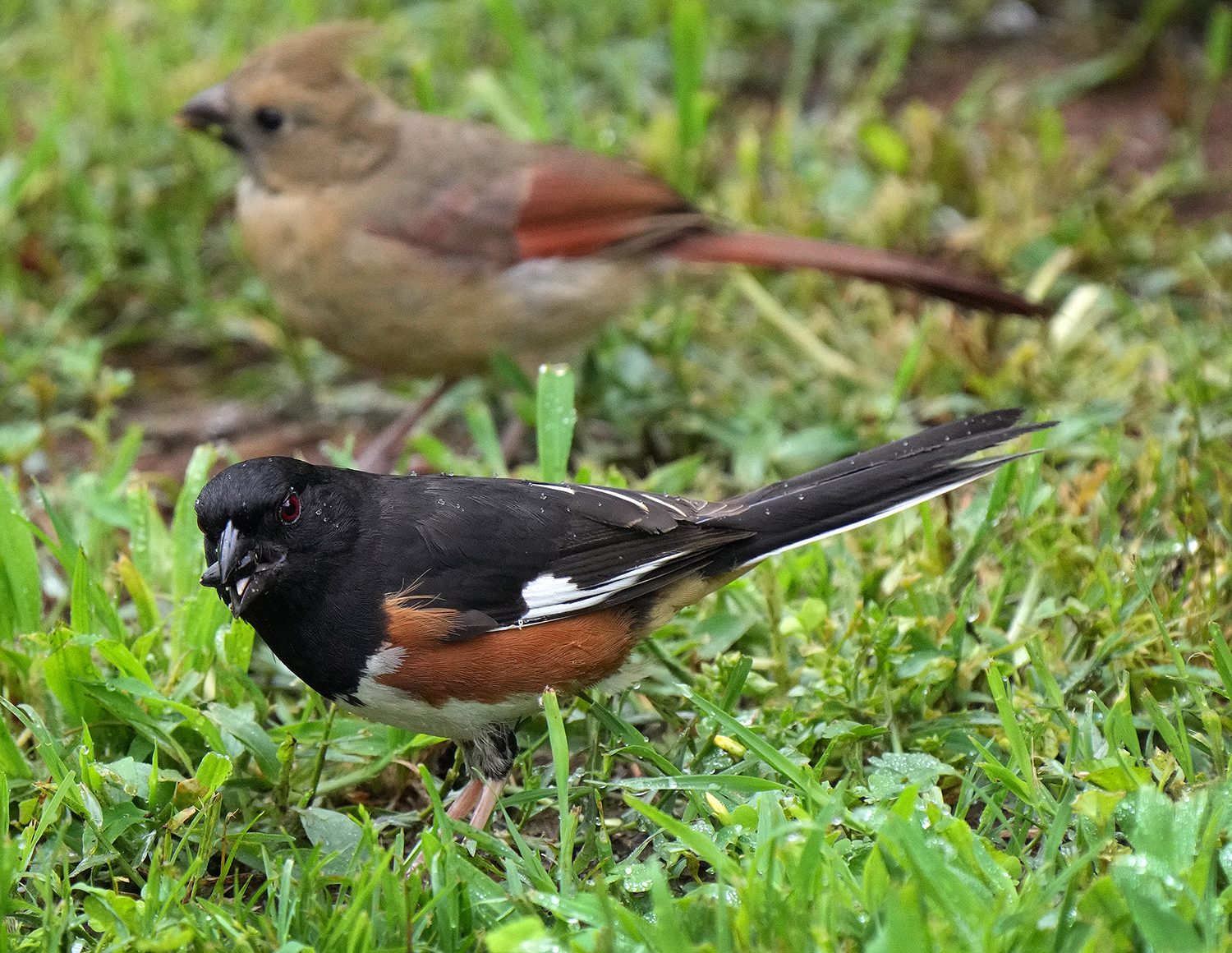 A female eastern towhee. She and the male are becoming regulars in the yard. Towhees usually prefer more heavily wooded areas. 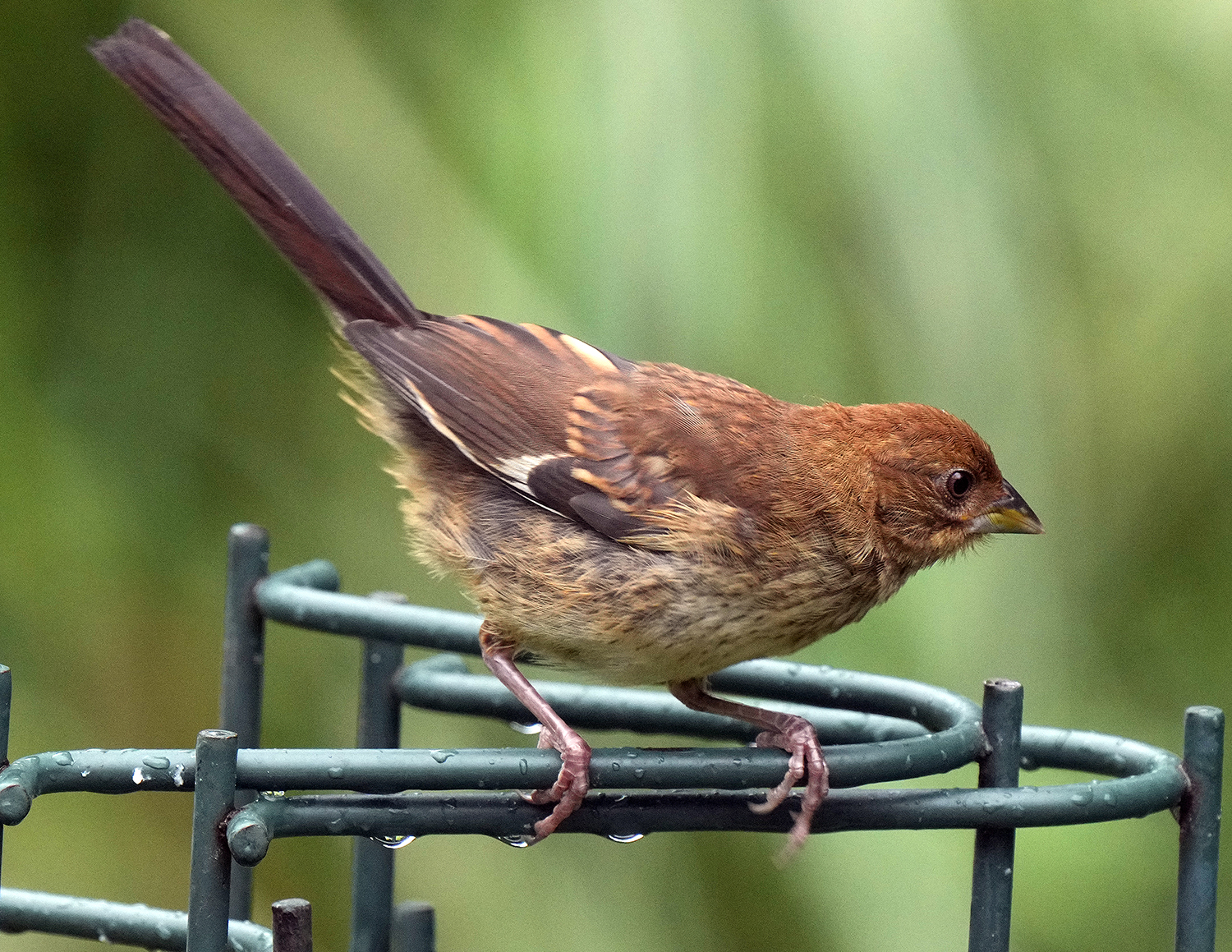 A mourning dove (Zenaida macroura) in the garden across from the feeders. The neighborhood is full of these birds, and you can hear them cooing all through the day. 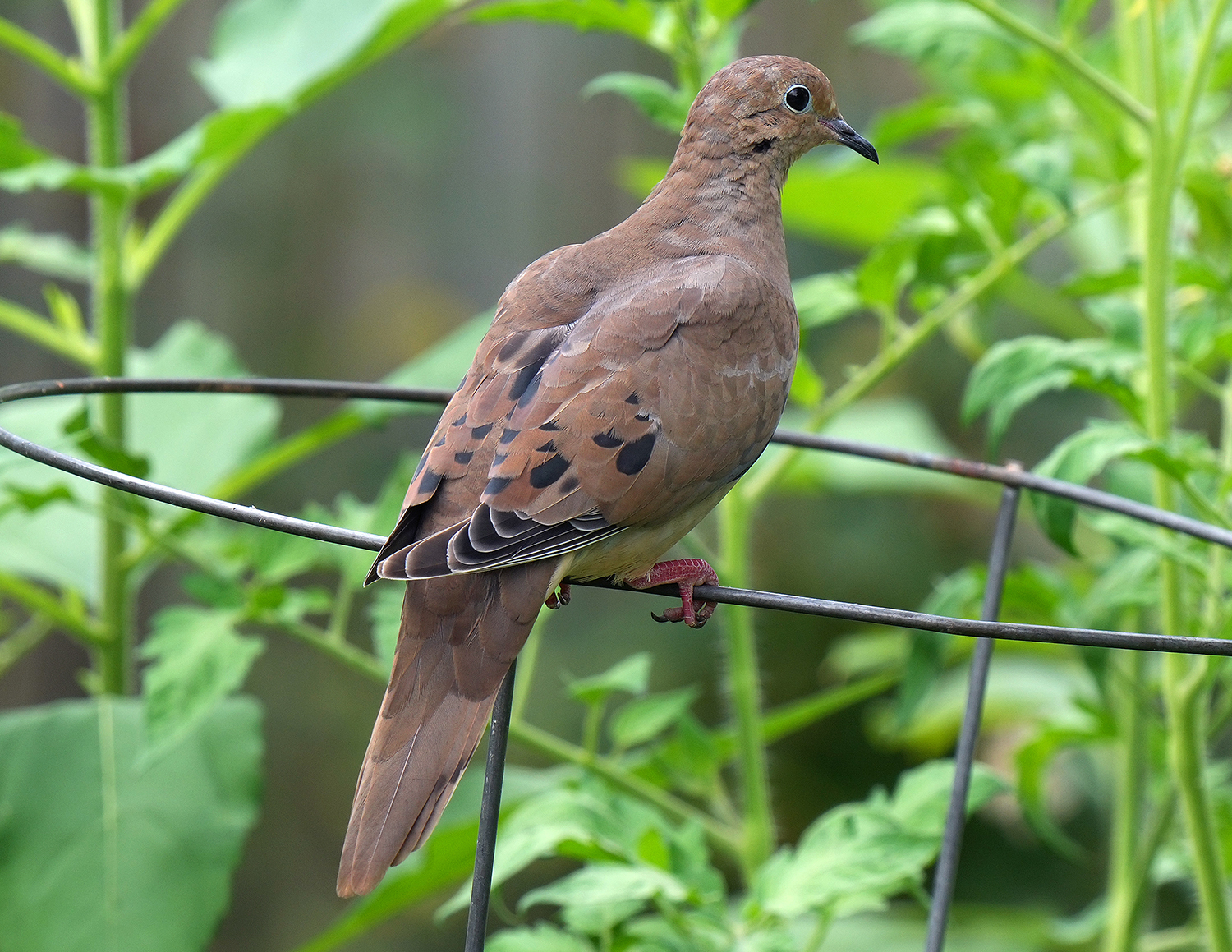 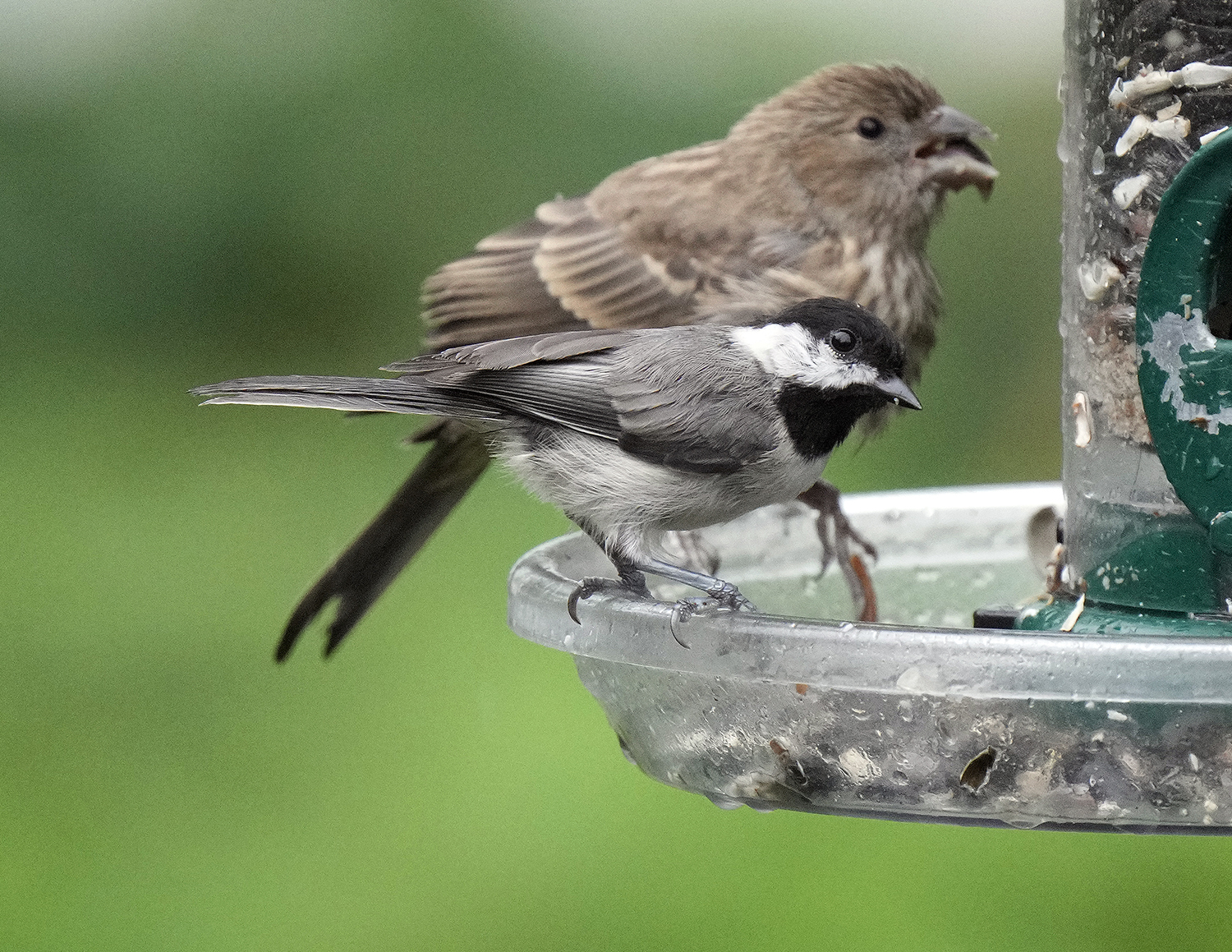 This female Northern Cardinal (Cardinalis cardinalis) is keeping an eye out for hawks. 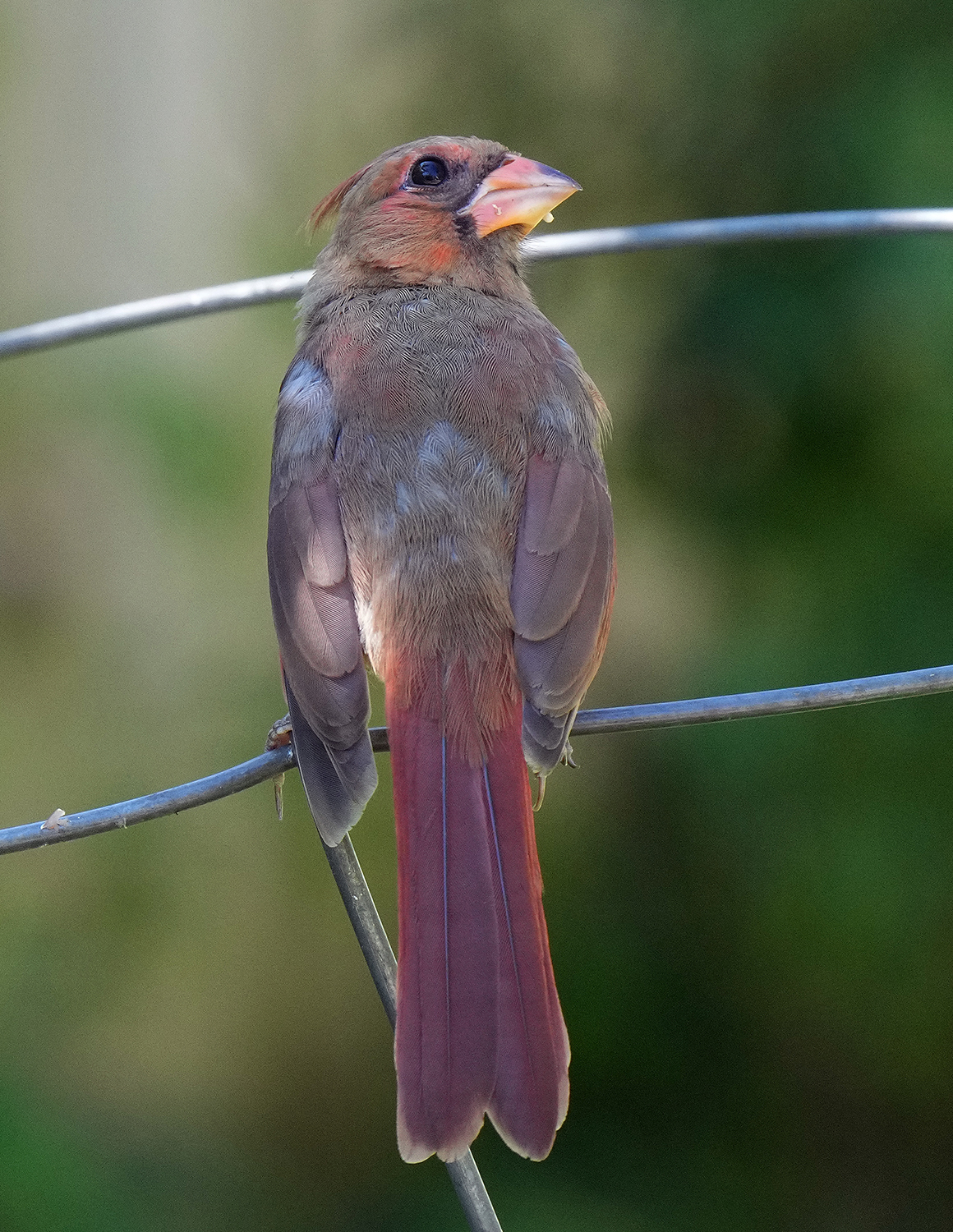 This northern mockingbird (Mimus polyglottos) really enjoyed the new bird bath. It was splashing around in the water and running along the rim of the bath for several minutes. 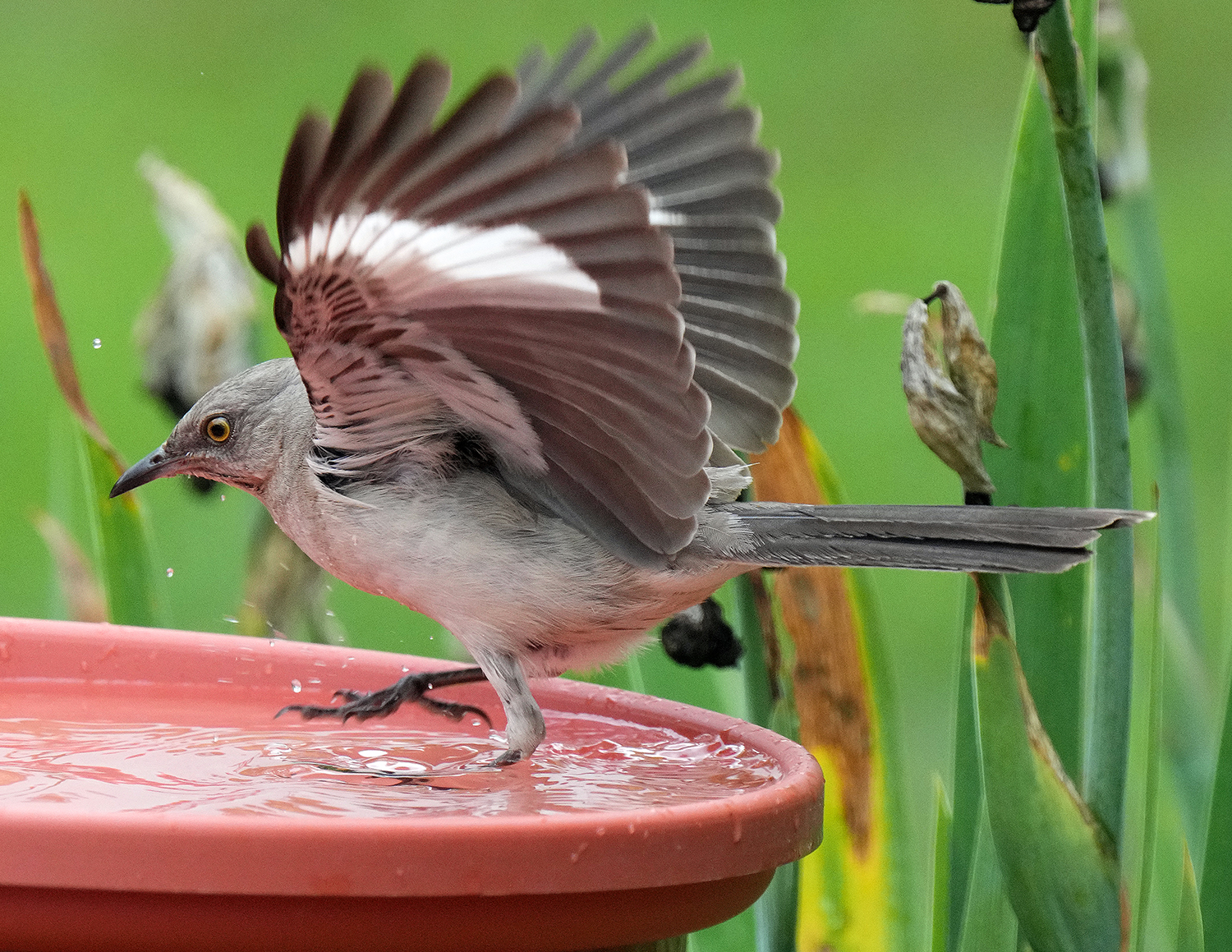 A house finch coming in for a landing 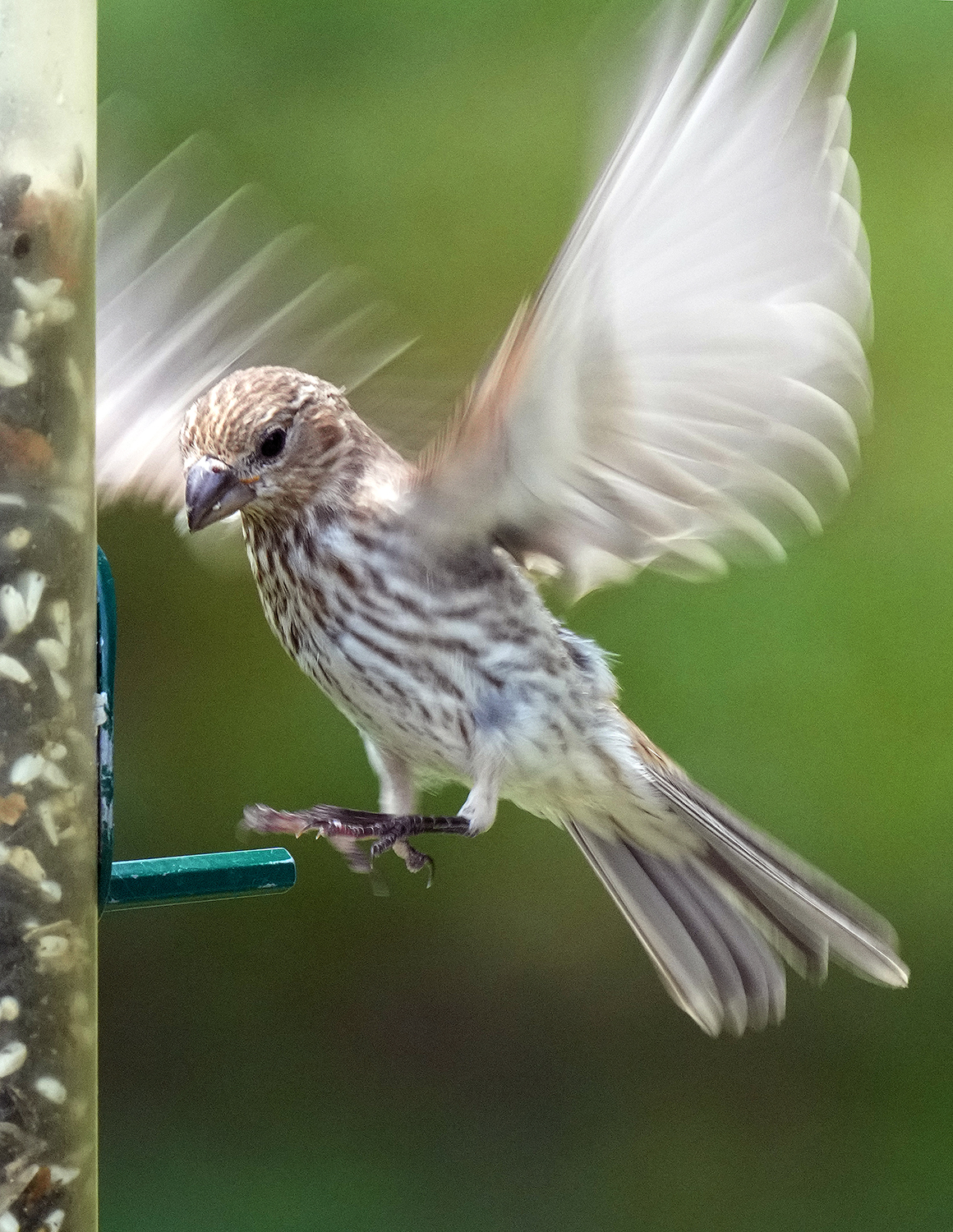 This barred owl (Strix varia) was hanging out in the trees at the end of the yard. There are several mated pairs in the neighborhood and at Pony Pasture Rapids, so they are a fairly common sight. If you are up and around near sunrise, you can see them returning to their roosts after a night’s hunting. Eventually a group of birds swarmed the owl and drove it off. 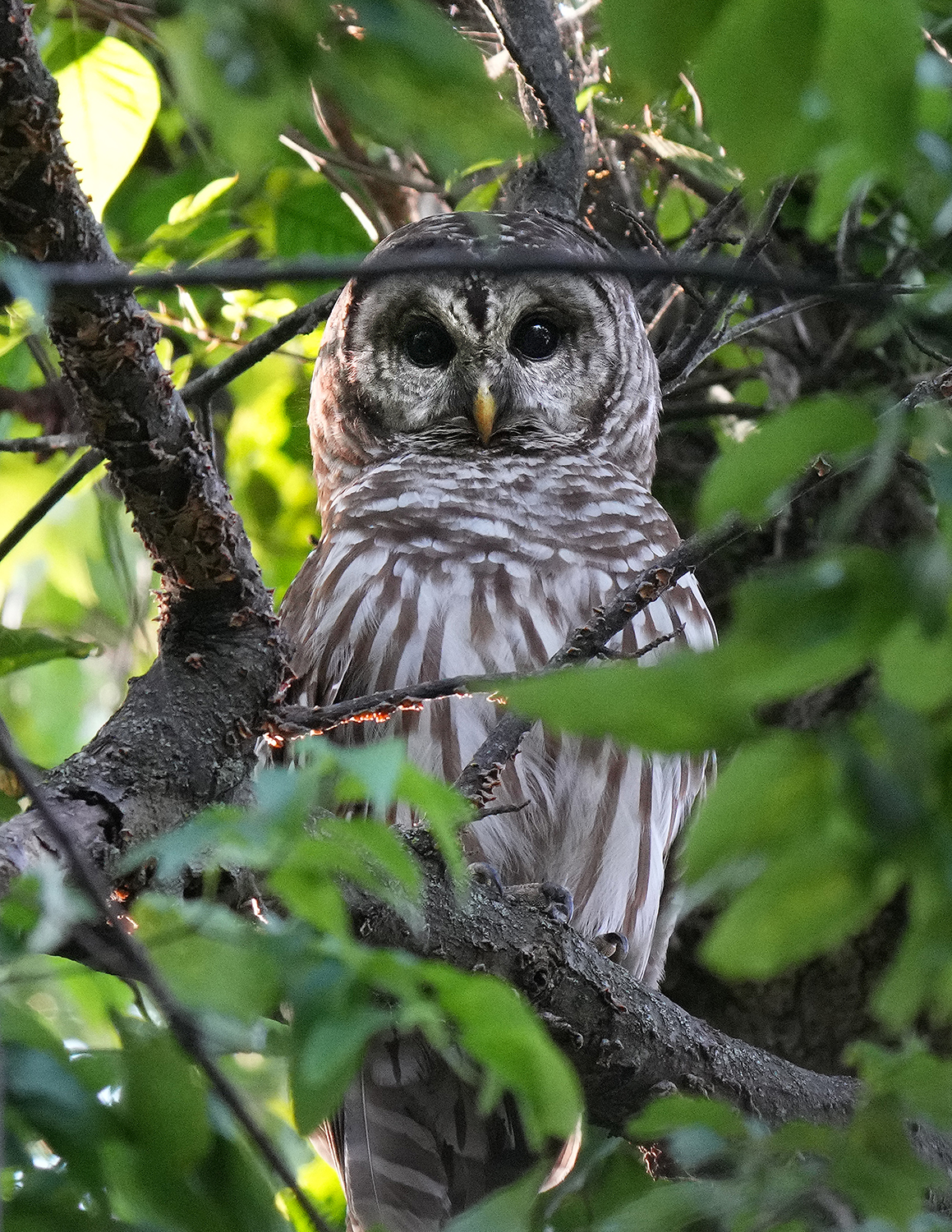 Chip Monk, the eastern chipmunk (Tamias striatus) hanging out under the fire pit. 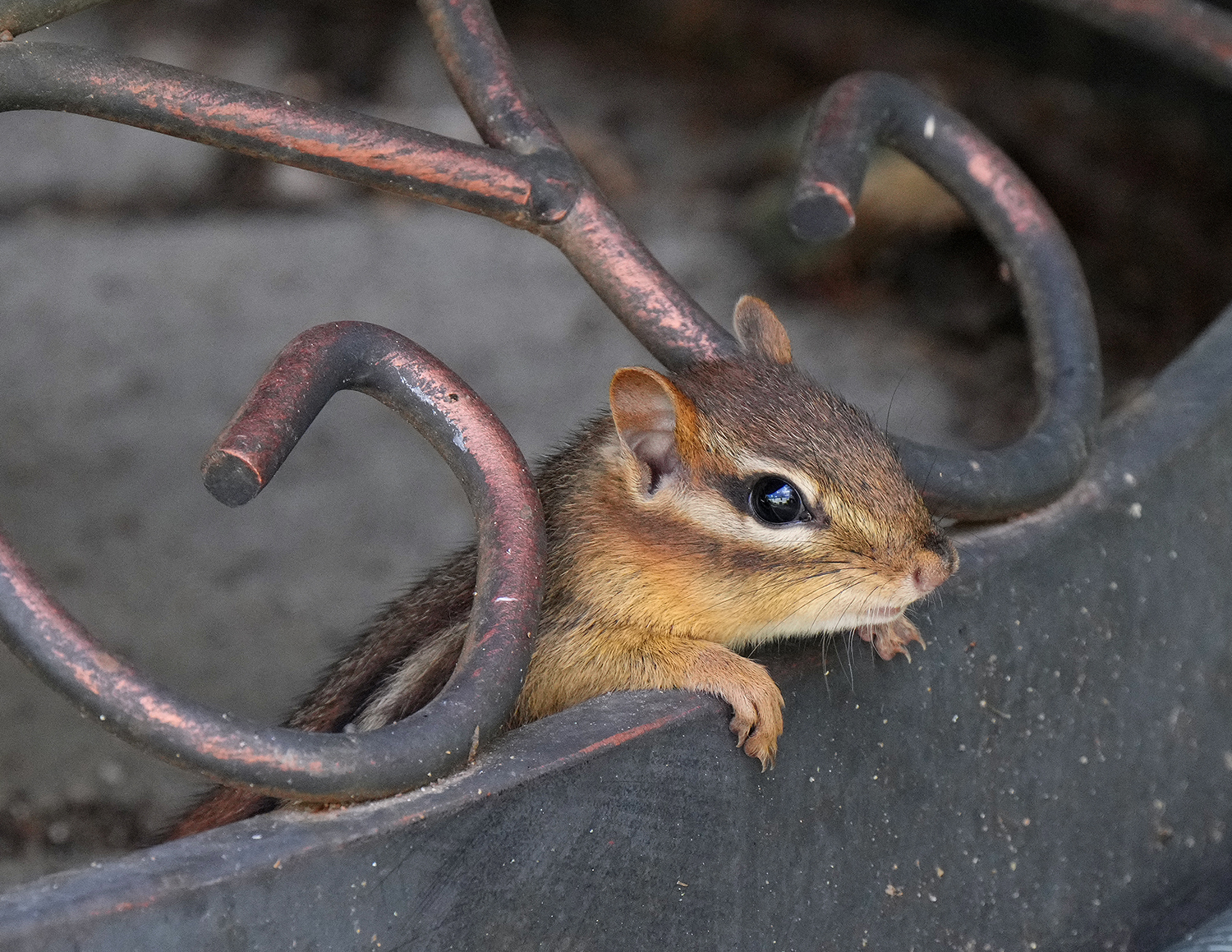