Today’s photos depict spiders, and were taken by regular Tony Eales from Australia. His IDs and captions are indented, and you can enlarge his photos by clicking on them.

First, I’ve mentioned before that my favourite spiders are the ones in the genus Arkys. These spiders are in a small family, Arkyidae, containing only two genera found in Australia, Indonesia, New Guinea and New Caledonia. Some are remarkably colourful, but most are cryptic, often mimicking a small piece of bird droppings.

Recently I found a new species of Arkys for me. I have been searching the literature and I suspect it may be a new species to science as well. This wouldn’t be surprising with such small cryptic spiders.

Here are few views of my find. The “bellows” butt is particularly interesting. I haven’t seen the like on any other spider. 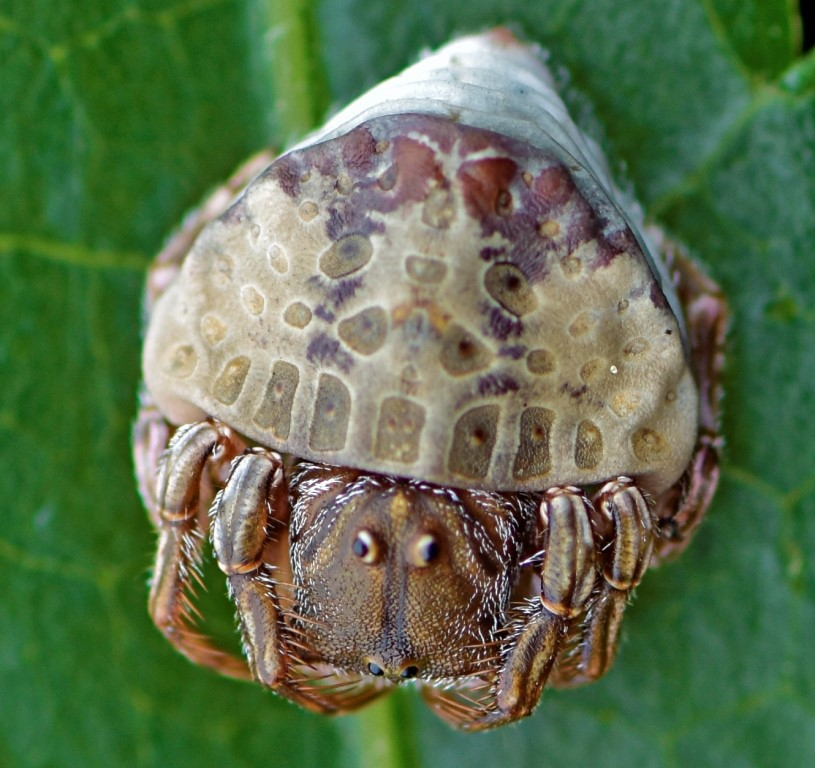 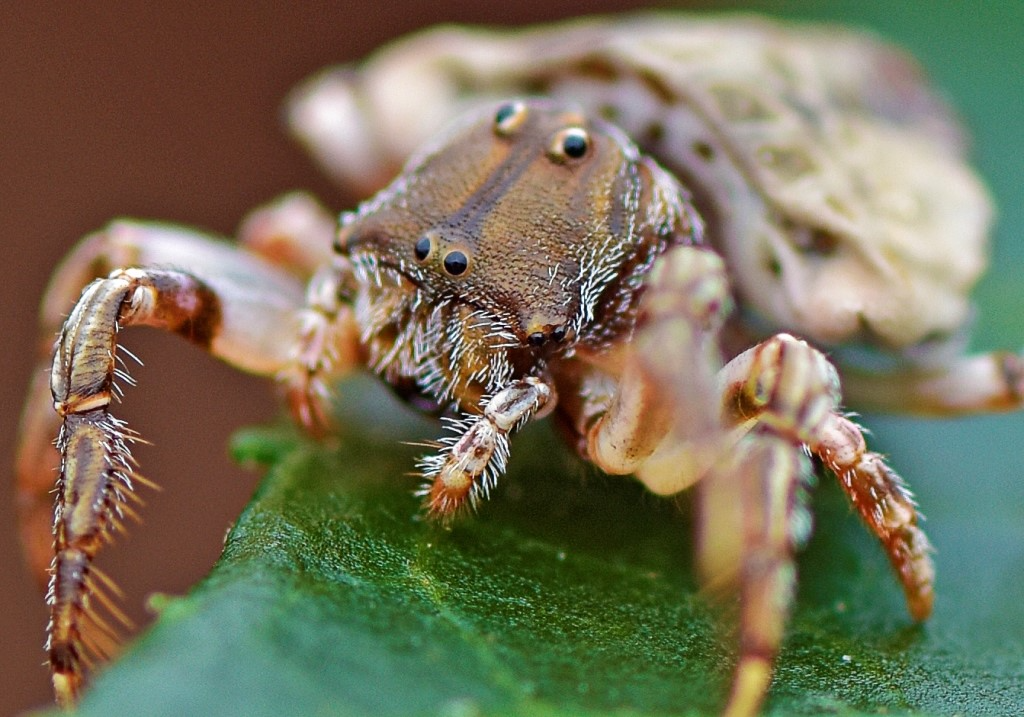 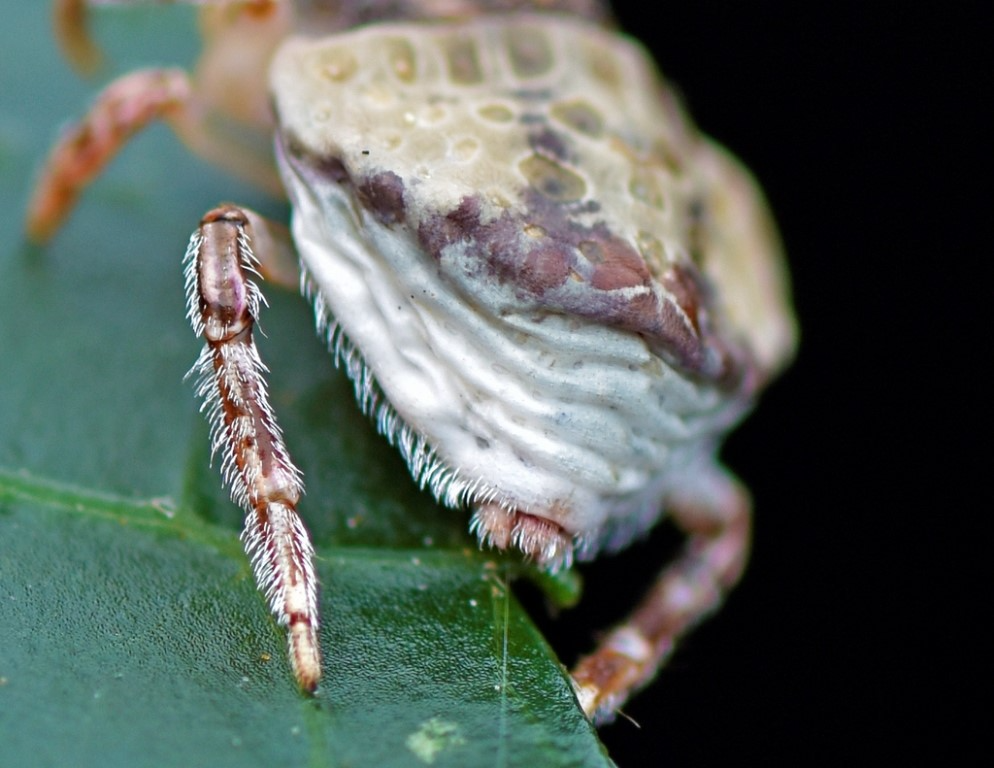 Another recent find is a specimen from the other genus in the Arkyidae family, Demadiana sp. Arkys aren’t generally big spiders, a 12-15mm specimen would be a whopper. Demadiana are generally far smaller still. They are in the 1.5-2.5mm range, and a large one might push 3.5 mm. 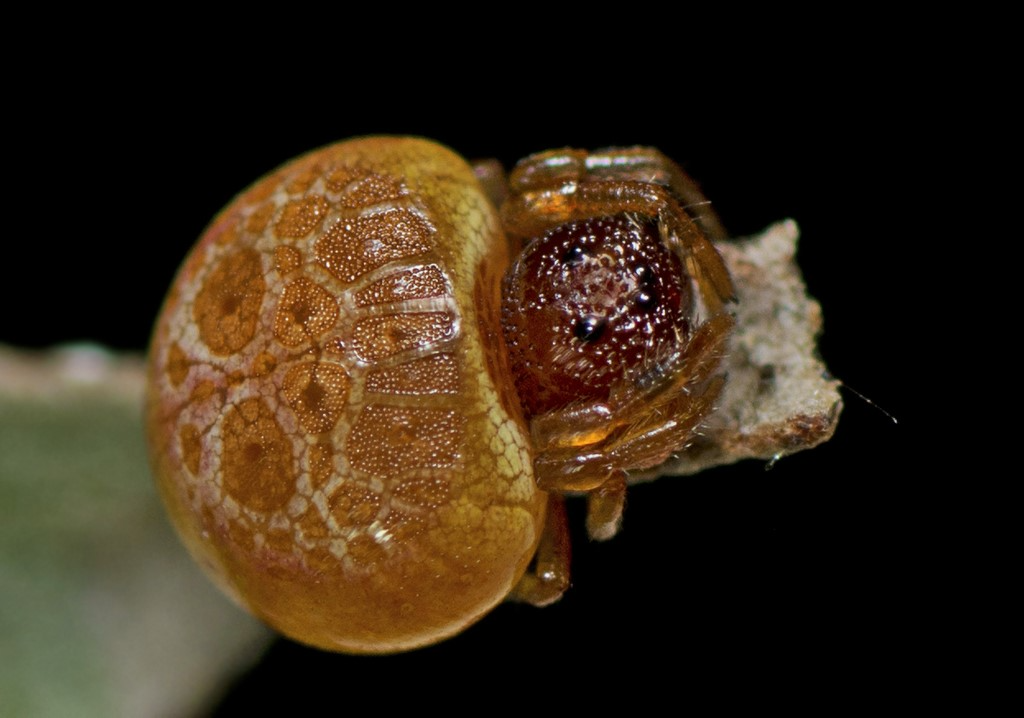 Some other reasonably recent finds I’ve made from this family is a juvenile Arkys tuberculatus. These have a distinctive cephalothorax (head) shape in which the tubercules upon which the eyes are placed are very exaggerated. Adults have a large almost ball-like abdomen, giving them their common name of “Blobby Arkys,” but this juvenile is if anything stranger looking. 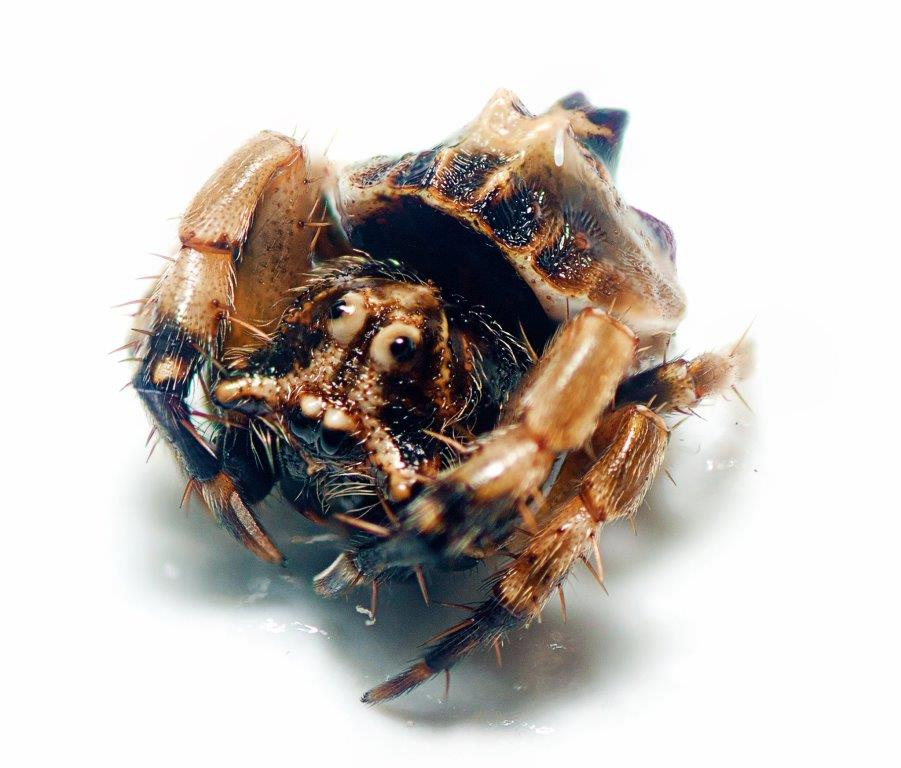 Another Arkys I found about a year ago is this male of what I think is Arkys alticephala [JAC: also called “high-headed Arkys], but I’m not as sure now and want to try to key it out. The distinctive feature of A. alticephala is the way it holds itself in repose and the single tubercule in the middle of the abdomen carapace. I have, however, recently learned that other, rarer Arkys also have a similar feature, which is why I want to revisit my original identification. 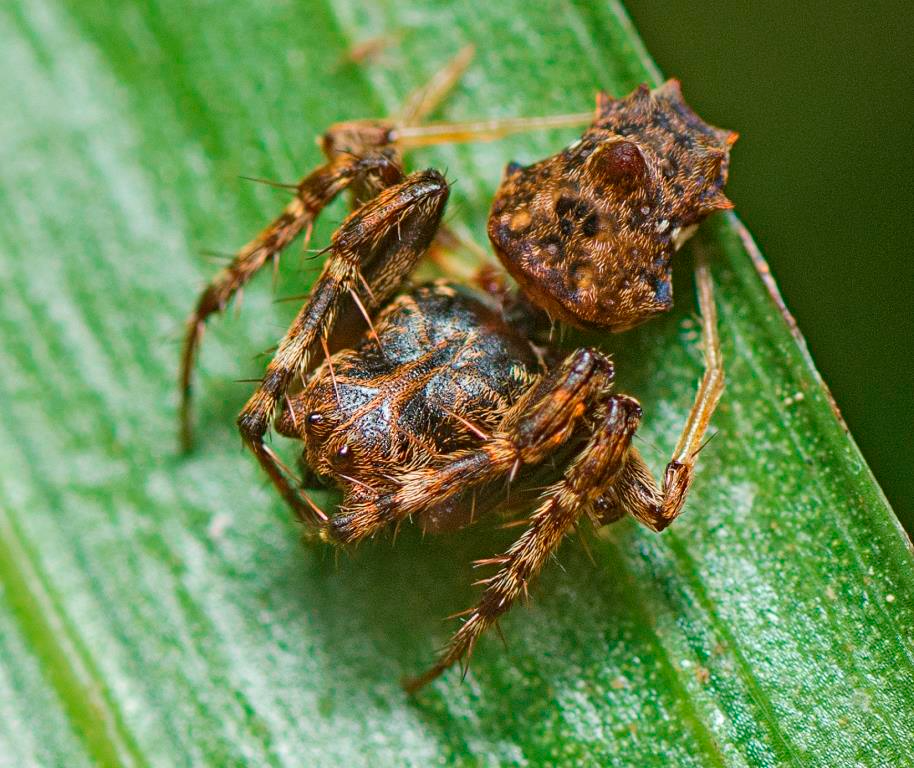 Last, this is one I’ve shown here before, Arkys furcatus [JAC: also called “Mascord’s Pretty Archemorus.”]  However, the first picture I showed was of a subadult who was coloured white. I have since found a juvenile and a full adult with its more typical rust and gold colour. 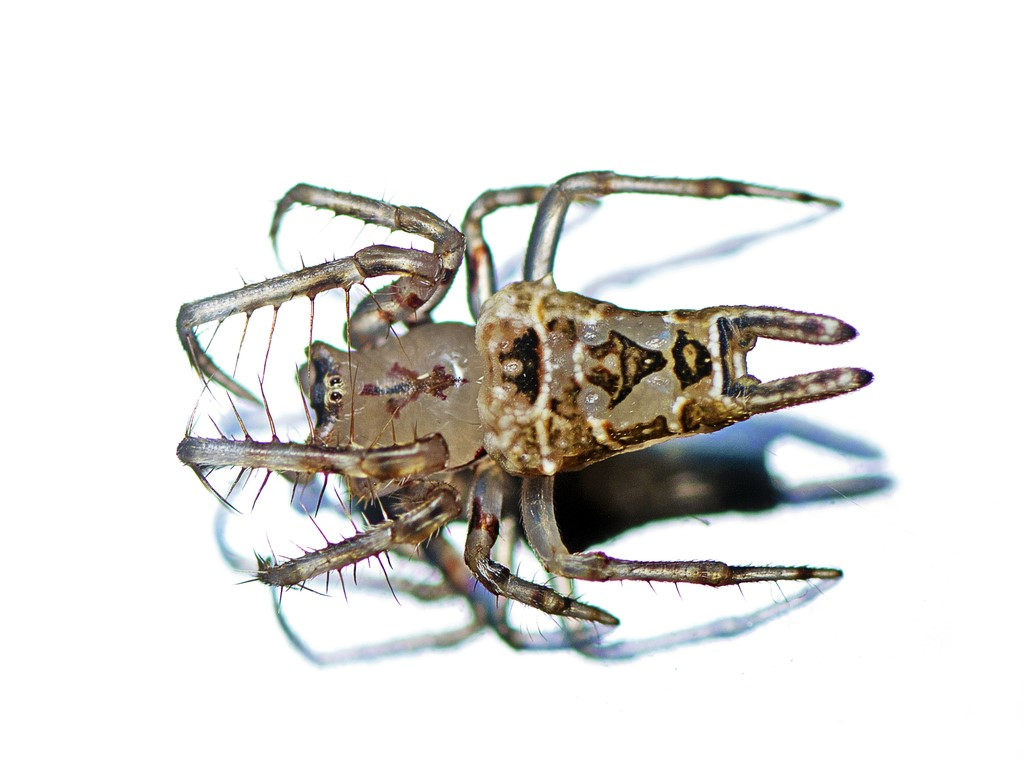 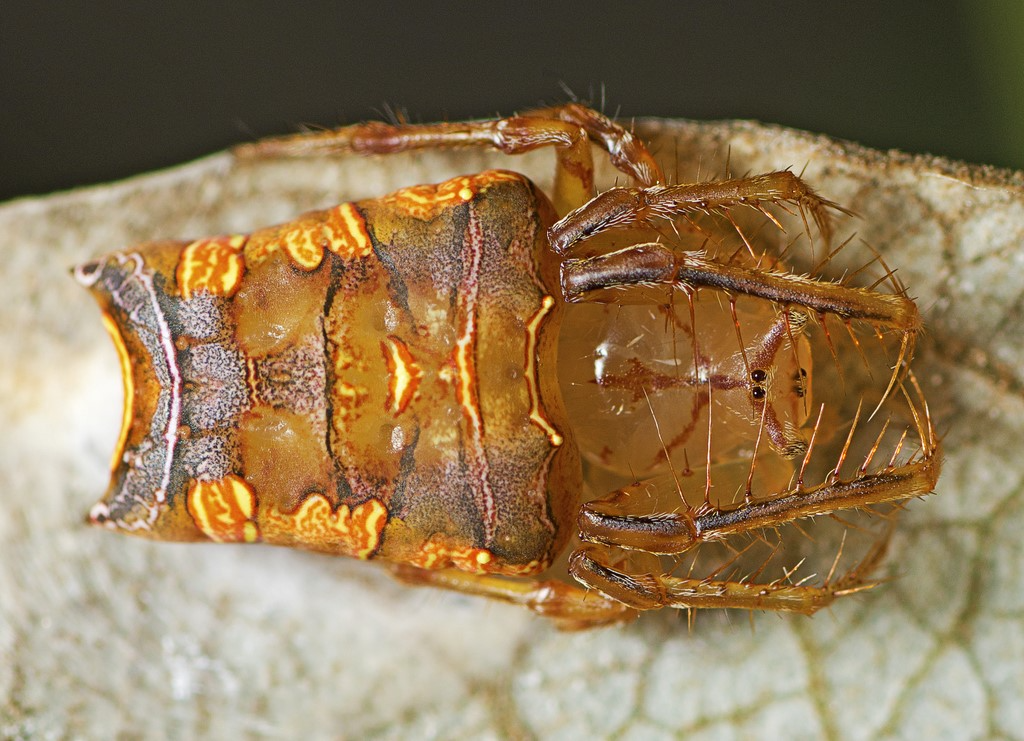