It’s Caturday, and instead of reading the Talmud you have three cat items to peruse.

This first one comes from The Independent (click on screenshot): 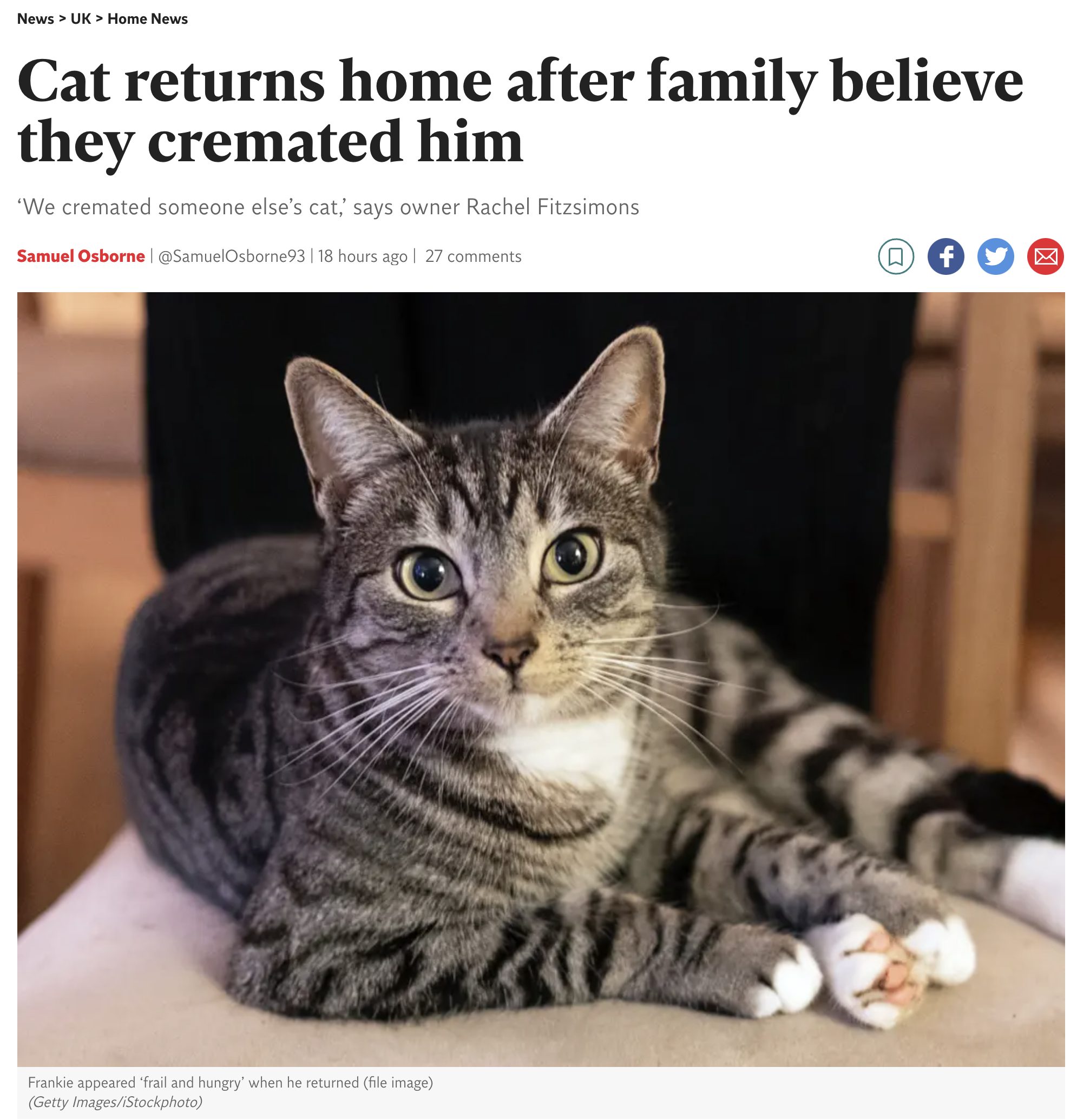 No, it wasn’t a zombie cat but a case of mistaken identity. As the paper recounts:

A family were shocked when the cat they believed they had cremated returned home as if nothing had happened.

Frankie, a 16-year-old tabby, failed to return home in Warrington, Cheshire, on 19 May.

His owners launched a search and spotted a dead cat on the M6 motorway that looked similar a few days later.

His owner, Rachel Fitzsimons, told the BBC: “Then he came back, frail and hungry but alive.

“So we cremated someone else’s cat.”

When Frankie reappeared, her son, Remy, seven, said: “It’s a miracle. We thought he had died.”

First of all, couldn’t they recognize their own cat? Second, they could have had him wear a collar or be chipped. Of course, a roadkill cat could have been squashed flatter than a pancake and unrecognizable, but still. . .

At any rate, Frankie should be renamed “Lazarus.”

You may remember Curtis Sliwa, founder of the Guardian Angels, a private group of volunteers with red berets who would patrol New York’s streets and subways looking for people in trouble and making citizens’ arrests of miscreants. The group has now spread to 130 cities and 13 countries, and Sliwa, now 67 is running for the mayor of New York City as a Republican candidate. (He will lose.)

The story below, however, is about Sliwa and his cats. He and his wife live in a small studio apartment on the upper West Side of NYC, and have 15—count them, 15—rescue cats. Click to read the story at the New York Post; 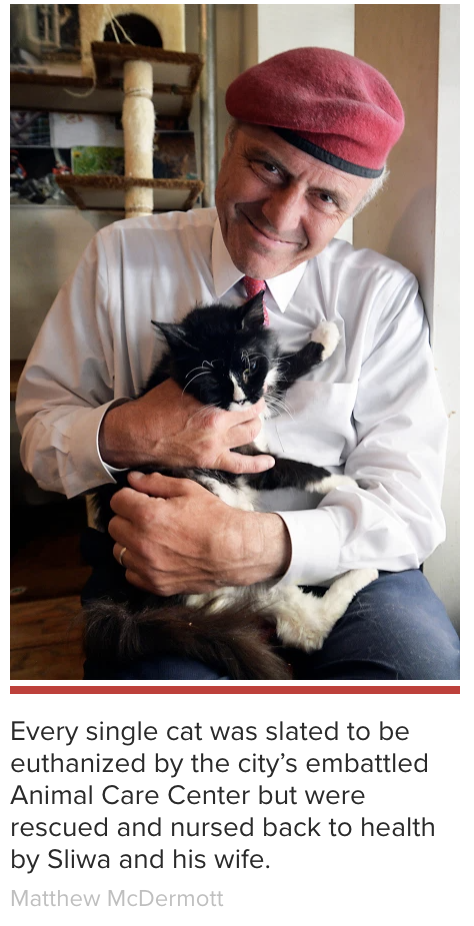 How can you keep 15 cats in a studio apartment (think of the litter boxes!). They manage, and keep those boxes quite clean:

There’s three windows that face the street that are perfectly set up for bird watching, or an afternoon snooze in the sunshine, that have been retrofitted with chicken wire so the cats can enjoy a makeshift outdoor space while basking on the sills.

Three towering cat condos cover the apartment’s main wall and in the kitchen, two private cat hotels are perched atop the cabinets that provide a birds eye view of the action below.

While there are a number of human decorations situated on shelves and tables across the apartment, a growing number of cat toys are stuffed alongside them, threatening to take up just about every free space left in the studio.

“I try to use electronic toys that they can chase because it’s hard to play with all of them all the time,” said Sliwa’s wife, Nancy Beth Sliwa, as she flung two toy wands around the room.

“We clean the litter boxes at least three times a day,” the cat mom said, which amounts to a monster 18 daily scoopings that allows the couple to maintain sanitary living conditions.

“I use vanilla candles and clean with alcohol, water and baking soda because the chemicals in those heavy duty cleaners can really get the cats sick.” 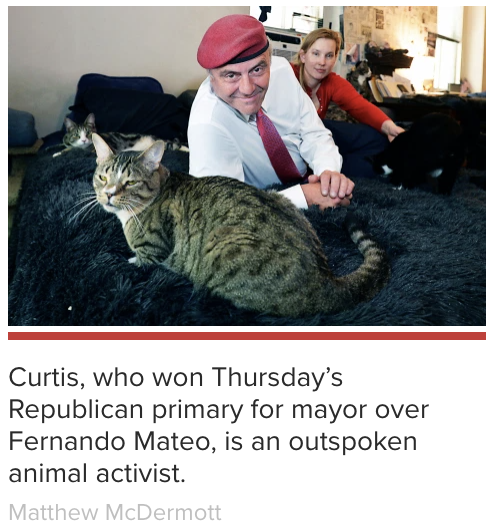 You have to hand it to the pair. They’re true animal lovers, and all their adopted cats were scheduled to be euthanized before they were rescued. And many of the cats are in transit, with Sliwa and his wife trying to find them forever homes.

The couple explained that they’re happy to open their home to the death row cats but they try to adopt as many of them out as they can.

“This year we’ve taken in 20 to 25 and adopted out 10. We’ve got four scheduled to be adopted out and when they go we’ll take in four more,” Curtis said, adding the older and less-healthy kitties will be lifetime residents.

Despite the work and the crowded conditions, the cat daddy said his furry roommates have been wondrous for his health.

“They actually cause tranquility. When I had high blood pressure after I had chronic Crohn’s disease, the cats would lay on my chest and bring my blood pressure down normally, naturally. That’s what cats could do.”

Well, they don’t do it because they want to. They are, after all, cats! 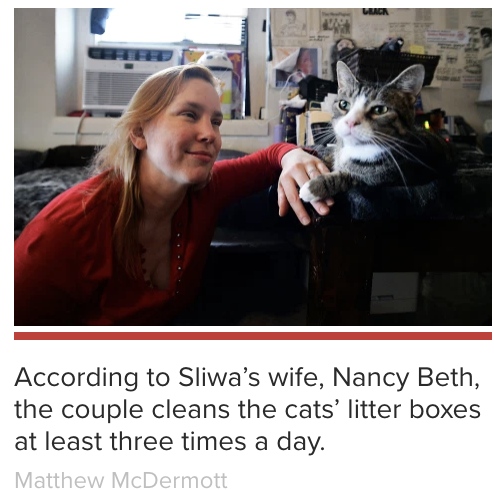