Send in your wildlife/travel/street photos. If you’re being indolent over the Fourth of July Holidays, it’s a good time to get a dozen or so photos ready to send to me. Thanks!

Today’s photos come from reader James McCormac of Ohio (he has a “massive photo website” here as well as a blog here). His notes and IDs are indented, and you can enlarge the photos by clicking on them.

Here are some interesting pennant dragonflies. These all come from a small pond in Jackson County, Ohio (home base of Ohio’s only four-term governor, James A. Rhodes), and were taken on June 29, 2021.

A male Calico Pennant (Celithemis elisa) tees up on an old rush stalk. The pure brown bokeh (background) is caused by the water/light reflectivity of the pond. The pennant is obelisking – pointing its abdomen directly at the sun. They do this as a means of minimizing heat absorption on very hot days, and it was hot. The temperature was in the low 90’s F by early afternoon, and it seemed like the humidity was 100%. Great for dragonfly action, not so great for humans. 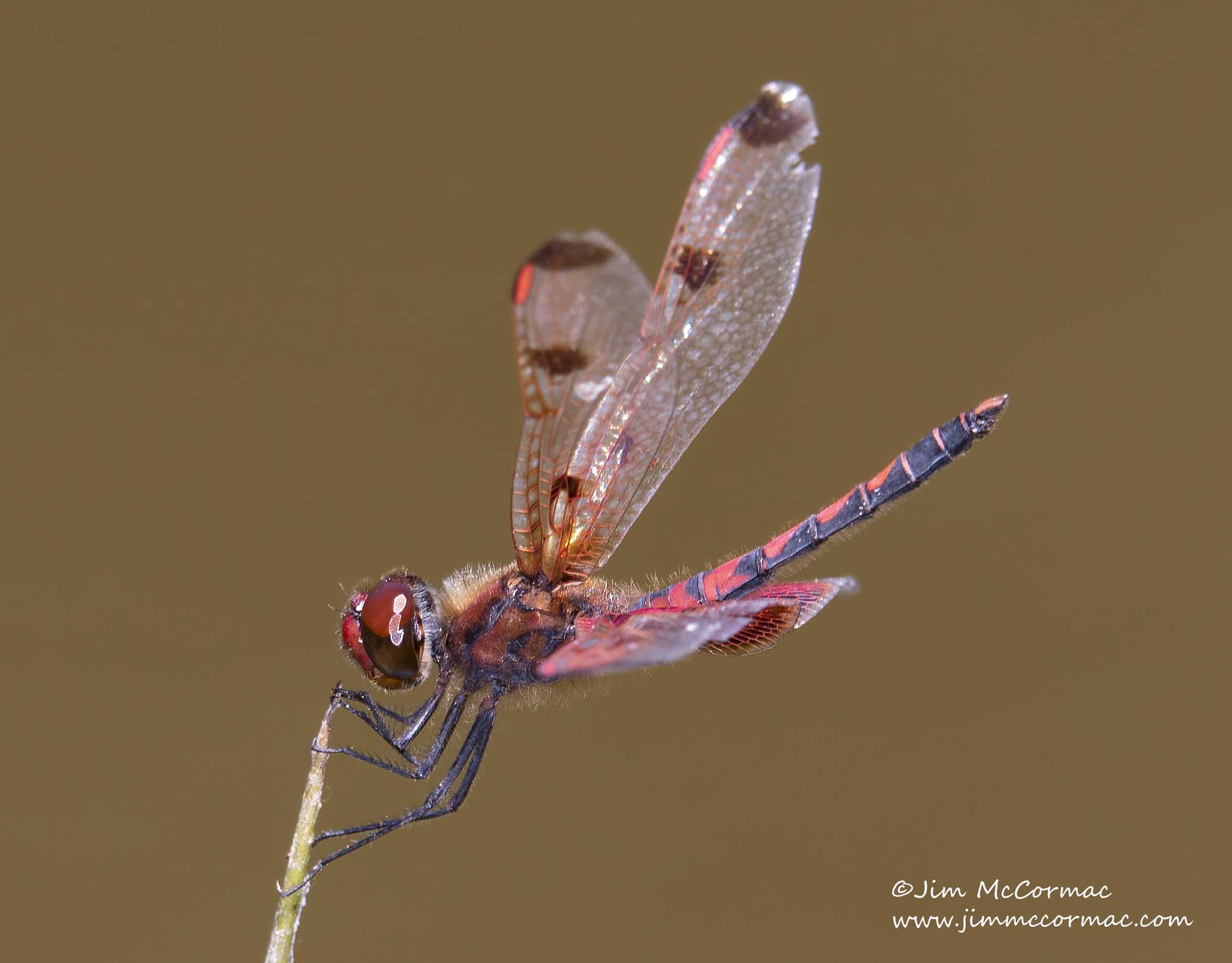 This pond supported numerous Banded Pennants (Celithemis fasciata). While Ohio’s other two common pennants – Calico and Halloween – are common statewide and probably in all 88 counties, the Banded Pennant is much more restricted in range. It is found in about 27 counties, mostly in southeastern Ohio. Pennants like to tee up on the tips of prominent perches as this one is doing. Securing images can be challenging, though, as there were so many pennants and other dragonflies that skirmishes were frequent. Often, as soon as I’d have acquired focus, another dragon would shoot by and my subject would light out after it. 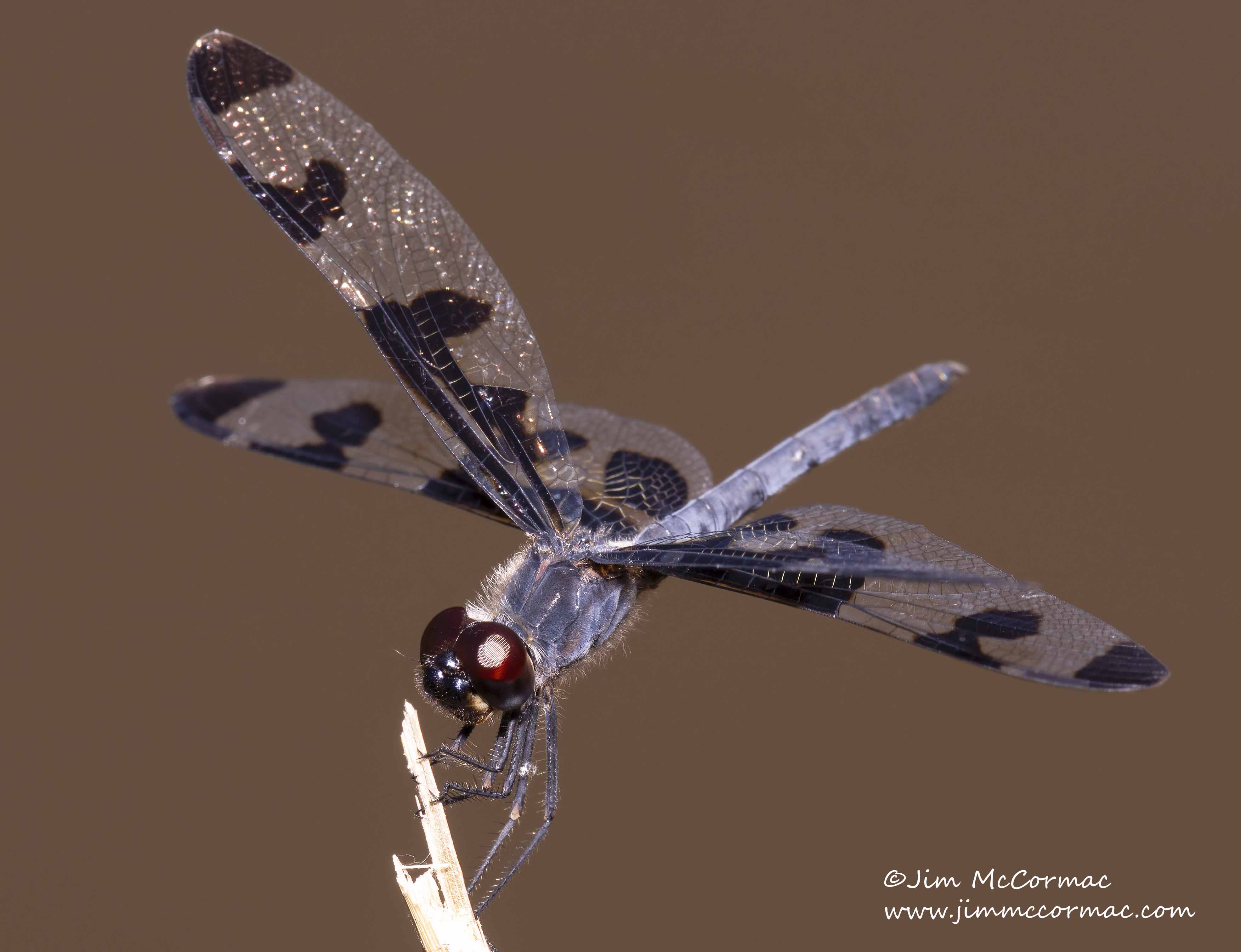 A pair of Banded Pennants locked in the mating wheel, making more of their kind. Dragonfly mating is rather rough, with the male grabbing and holding the female behind the head with specialized claspers. If it ain’t broke, don’t fix it, though – the Odonata have been around for over 300 million years, largely unchanged. 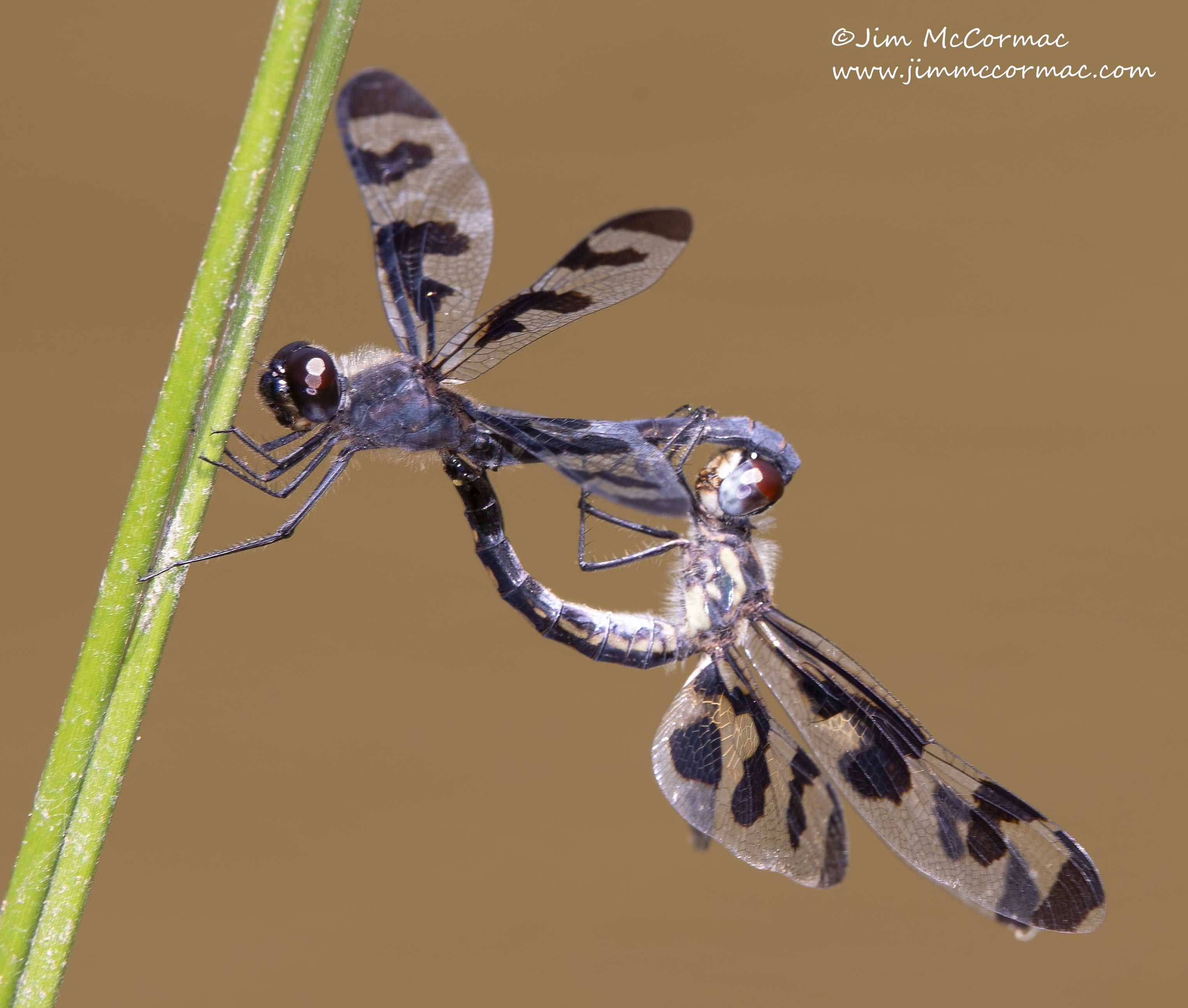 This unassuming little bluish-black fellow was the primary reason for my visit to this pond. It is a Double-ringed Pennant (Celithemis verna). This species was discovered at this site in 2019, the first record for Ohio. That year, I think about seven males were tallied. On this day we counted about 20 males, so their presence at this site isn’t a fluke involving a few wayward insects. The Double-ringed Pennant is a species of the southeastern U.S., apparently found mainly along coastal plains. The Ohio site might be the furthest north it is currently known in the interior, at least as an apparently established population. Double-ringed Pennants may be slowly shifting their range northward, as is apparently happening with a number of other dragonfly and damselfly species. 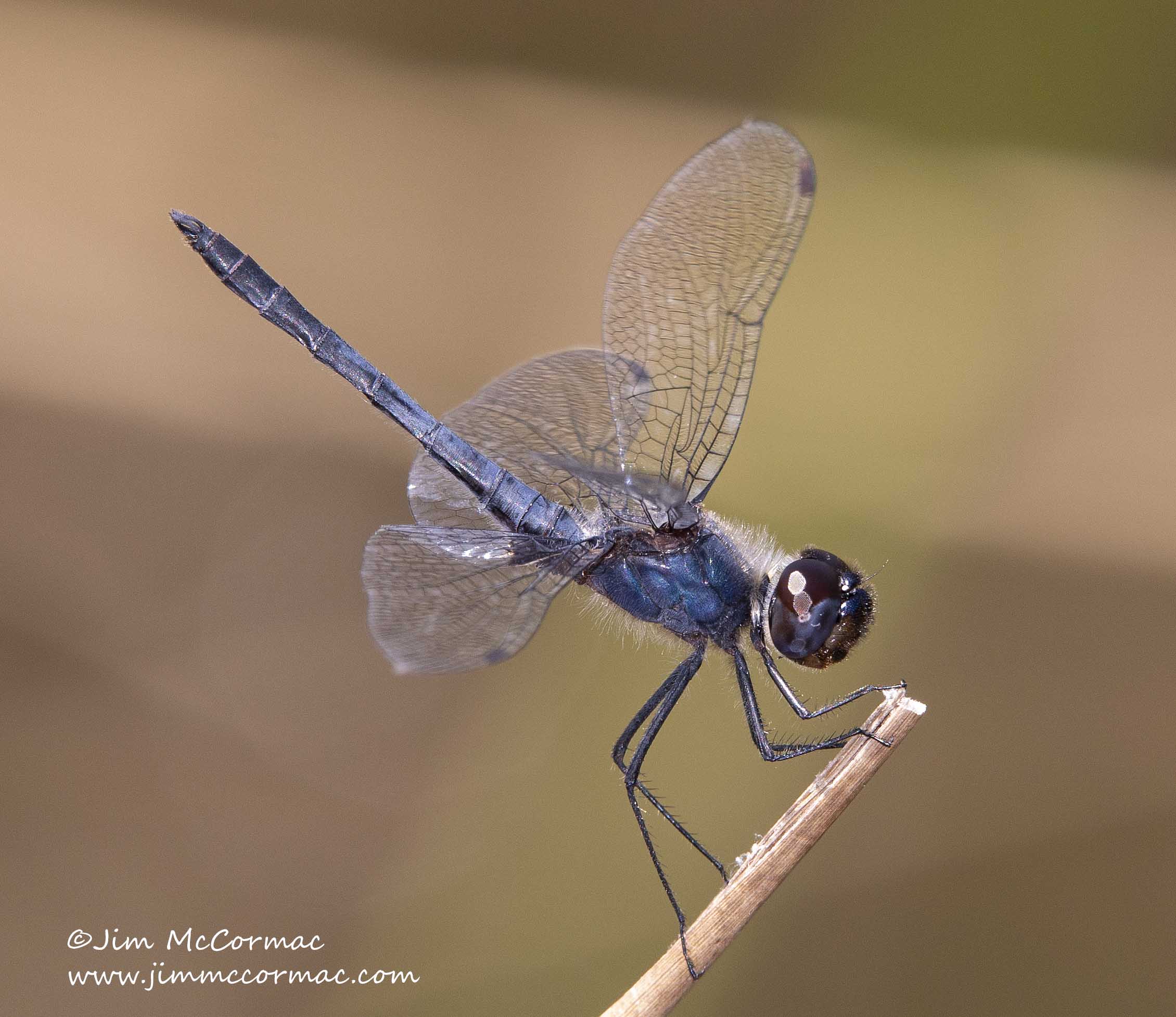 Finally, for the sake of completeness, I threw in this showy male Halloween Pennant (Celithemis eponina). I made this photo a few years ago, at another site. Surprisingly, I did not see this species anywhere on this day, but I imagine if I had hit other sites I could have drummed one up. It is the fourth of Ohio’s Celithemis pennant species. 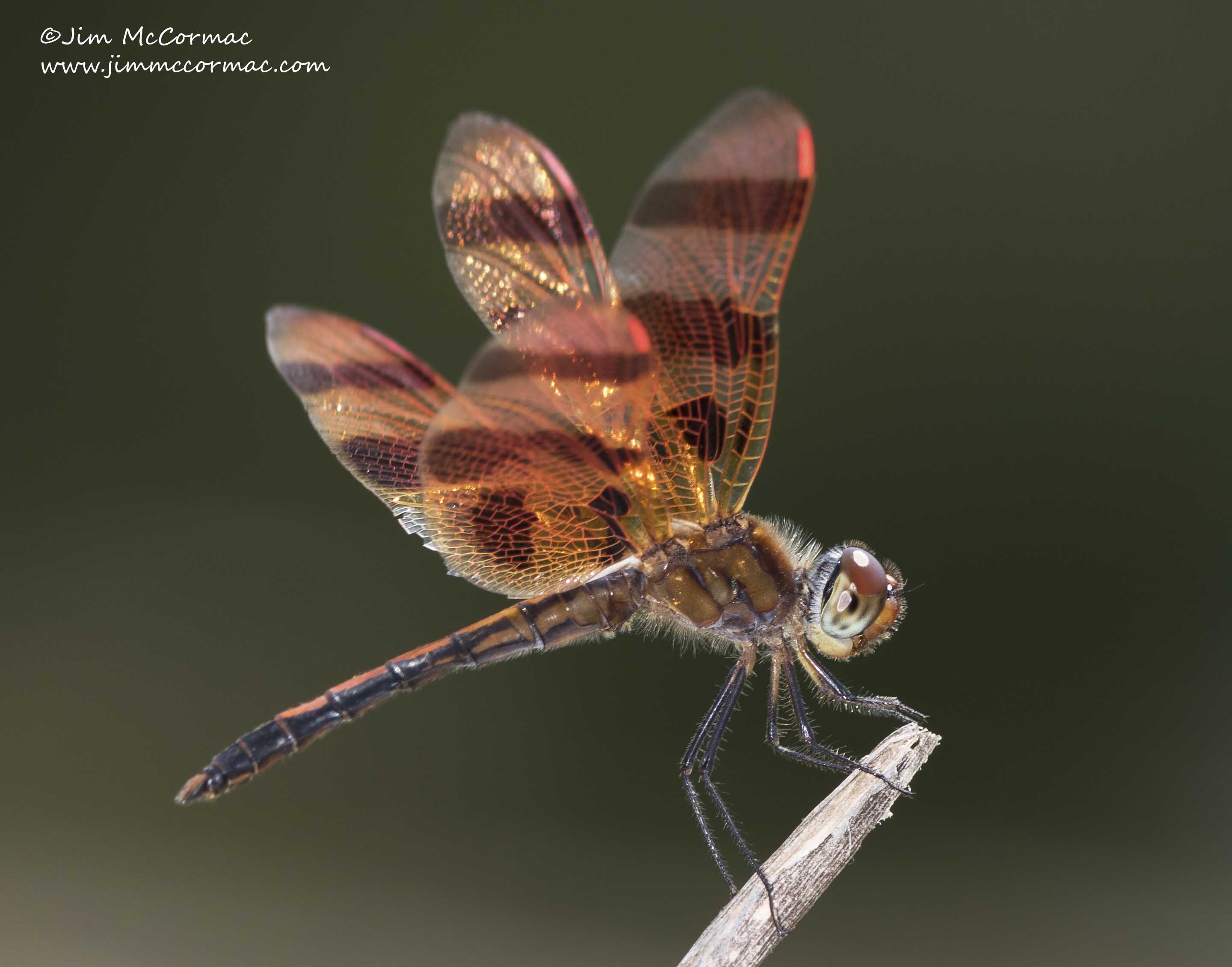