The evidence for the Norse having arrived in North America is less extensive than I thought. Some “settlements” with artifacts said to be from early Norse explorers have been shown to be misinterpreted, and most of the Norse “colonization” of North America involves settling in Greenland, which some people (like me) don’t consider part of North America.

Yet there is one indubitable bit of evidence—and it’s strong evidence—that the Norse founded a settlement on Newfoundland around 1000 AD. It’s the settlement of L’Anse aux Meadows on the island of Newfoundland, which surely counts as North America. Wikipedia gives a summary, including pictures of the remnants of the eight “sod longhouses” built by the Norse, and a reconstruction of what the settlement looked like. But this isn’t just a fantasy of Wikipedia editors. A Google Scholar search for “L’Anse aux Meadows” shows dozens of papers agreeing that this was indeed a Norse site. It was short-lived, to be sure, but certainly Norse.

Besides the remains of eight buildings, there were Norse artifacts:

Other things found at the site consisted of common everyday Norse items, including a stone oil lamp, a whetstone, a bronze fastening pin, a bone knitting needle and part of a spindle. Stone weights, which were found in building G, may have been part of a loom. The presence of the spindle and needle suggests that women as well as men inhabited the settlement.

Here are pictures of what was there and what remains (all captions from Wikipedia); this is now a UNESCO World Heritage Site.

This is clearly the earliest discovery of North America by Europeans that we know of, though of course Indigenous people populated the continent already, with their ancestors having crossed the Bering Strait about 15,000 when there was a land bridge. What we mean by “discover” is that the continent was discovered by people from other places.

But one scholar, a contrarian named Gordon Campbell,  just published this article in Time Magazine saying that the Norse settlement is bogus, and also that it’s a “problematic” myth. (Again, when you see the word “problematic,” run for the hills!). Click on the screenshot to read it. Campbell is described “as a Fellow in Renaissance Studies at the University of Leicester and a Fellow of the British Academy. His new book is Norse America: The Story of a Founding Myth.” He seems to be a respectable scholar, but he’s an English scholar studying the Renaissance, not an archaeologist. His book has but three reviews (and 2.5 out of 5 stars on Amazon), with two reviews citing the Newfoundland settlement.

Click on the screenshot to read the misguided, ideologically-soaked piece: 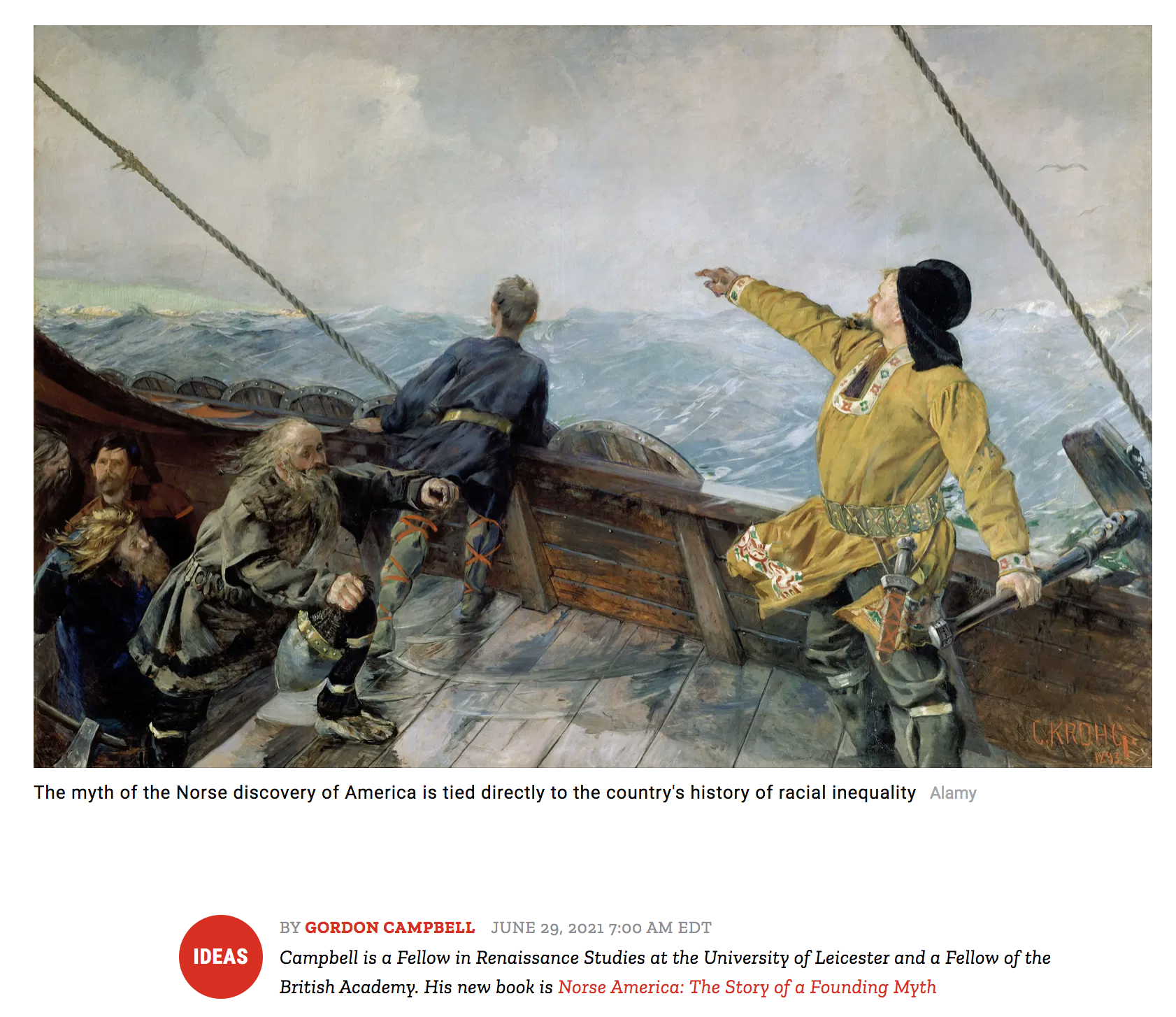 I don’t have much to say beyond Campbell’s motivations, which are apparently to either rewrite or ignore history because the Norse settlement in Newfoundland is ideologically repugnant to him. (He doesn’t mention L’Anse aux Meadows.) Why the distortion? I’ll let Campbell speak for himself:

Why do unfounded claims about the Norse in America matter, beyond the simple desire to make history truthful? One of the glories of America is the ambition to realize Thomas Jefferson’s contention that all men are created equal. Yet even today, racial and ethnic equality remains unrealized, and racial entitlement remains a potent force.

Some who have touted the idea of the Norse discovery are benignly proud of their ancestry, and curious about exploring it. But such sentiments can become sinister, leading to claims of ethnic superiority. At the extreme, Nazi sympathizers in the U.S., whose numbers included Charles Lindbergh and some other members of the America First Committee, found a link to the Aryan supremacy claimed by Hitler’s followers.

The origins of such entitlement can be traced to the colonial period, when English migrants felt entitled to conquer and occupy someone else’s homeland, to disinherit and force to the margins of society the people that they displaced, and to go on to enslave the peoples of another continent. It was this sense of ethnic superiority that allowed a spurious historiography whereby America was discovered by Vikings.

Yes, he has to drag race into it, and disses Scandinavian pride in the “discovery” throughout his piece. And he claims, without any references, that some of those sentiments were “sinister”, with the sweating professor even connecting them to Aryan supremacy and Hitler!

Well, facts trump Campbell’s feelings, and no matter what sentiments the Norse “discovery” provoked, they settled in Newfoundland nevertheless. They didn’t leave any genetic heritage, for we find no trace of Norse genes in Native Americans, so the Norse either packed up and left or died out without issue.

But that doesn’t matter. What we see here is a reputable magazine that didn’t do its fact checking, to the extent that it publishes deliberate distortions in the service of an “antiracist” ideology. I guess we should be getting used to this, but this is a particularly blatant example of distorted journalism in the service of ideology. Hitler—really?

Here’s a nice video about the settlement:

73 thoughts on “Scholar denies, in the face of strong evidence, that Norse “settled” in North America, but only because he doesn’t like the implications”