Apparently Amazon Studios has issued a new “inclusion policy and playbook”, which has some useful provisions about including people of color in their company, including actors and those with creative roles, though these look a lot like quotas. In fact they are, complete with percentages, but I don’t see how you can enact affirmative action without having at least an idea of what degree of relative representation you want.

Bari Weiss also read through the entire “inclusion playbook“, which I haven’t done, and she picked out some examples of new guidelines for woke language and what she calls “the woke numbers game”.  Some of the changes in language are just euphemistic, some familiar but still discombobulating (“womxn”), but others seem deliberately duplicitous, like hiding the most widely known construal of “jihad”. She’s put up a short piece on her Substack site. 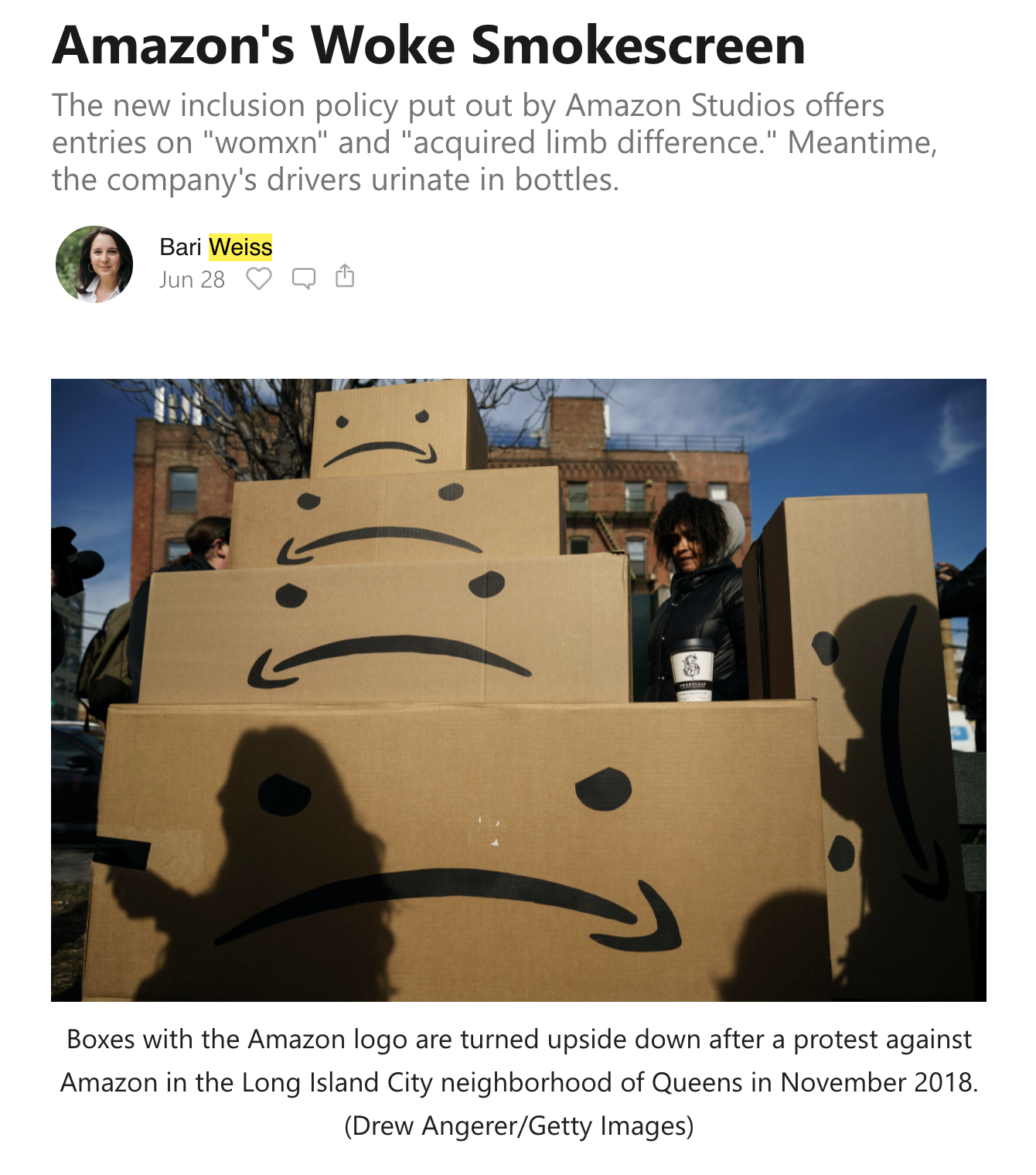 I’ll give just two quotes (there’s more to read), one of them long. There is apparently no limit to how far places like this can twist language to defang or alter it. “Orwellian” is not too strong an adjective.

Amazon is turning the making of TV and film into the same woke numbers game played at every other elite institution. (Exhibit A: Sixty-eight percent of the students admitted to Princeton’s class of 2025 self-identify as “people of color.”)

I decided to read through Amazon Studios’ Inclusion Playbook, designed “to help disrupt the biases that occur across the lifecycle of a series or movie, from the first inkling of a concept to viewers streaming the content on Prime Video.” The playbook directed me to a factsheet that promised to help improve my familiarity with all things diverse and inclusive.

There I encountered entries on things like: acquired limb difference (otherwise known as “amputation”). There’s an entry on mean girls, which, I learned, was a “stereotype of girls and young women characterizing them as socially aggressive and unkind” —characterizations that, apparently, not only “enforce the bad behavior” but “fail to address the larger social issues girls and women face like insecurity, lack of confidence, and pressure to fit the ‘feminine beauty ideal.’” Someone please relay that to Tina Fey.

There were entries on haka (I’ve been a fan for years), unnecessary intersex surgeries (bad), womxn (whatever happened to good old-fashioned womyn?) and the biological clock, which is explained as: “in relation to birthing people, the biological clock refers to the sense of pressure people feel to have children during their ‘peak’ reproductive years.” As a 37-year-old womxn/birthing person, I can assure you that those scare quotes around the word ‘peak,’ as though human reproduction is some kind of social construct, are superfluous.

Moving right along, the Inclusion Playbook taught me that the Arabic word jihad means to “strive and struggle for God,” and is a term that describes “personal betterment.” Sharia, we are told, literally means “the clear, well-trodden path to water.”

I also learned about the Yazidis, who are victims of the apparently non-violent jihad waged by the Arab League (also covered in this document!). Do I even need to tell you that there is no mention of Israel or of Jews?

Well, “sharia” says more than that: the definition from the factsheet, finished off with a comment to head off dissent, is this: “Sharia literally means “the clear, well-trodden path to water.” It’s a code of conduct for all aspects of Muslim life, derived from the Quran and Hadiths (Islamic text about the Prophet Mohammed’s life). Sharia is not a set of laws to infiltrate America.”

And the definition of “jihad” avoids one of the most obvious meanings entirely and deliberately—in fact, dissimulates about it. Amazon defines it this way: “Jihad/Jihadi: Jihad literally means ‘strive and struggle for God,’ which encompasses an internal struggle towards personal betterment. A jihadi is one who strives and struggles for God. Jihad is not an order to murder and doesn’t mean ‘terrorism.’

Umm. . . . . I looked up “Jihad” in the Oxford English Dictionary and here are the only two definitions, in order:

1. Islam. A religious war of Muslims against unbelievers, inculcated as a duty by the Qur’an and traditions. Cf. Islamic Jihad n. at Islamic adj. Compounds.

2. In extended use. A war or crusade for or against some doctrine, opinion, or principle; war to the death.

Sharia is defined this way: “The Islamic religious law, including the teachings of the Qur’an and the traditional sayings of Muhammad.” It does not say that sharia often mandates female oppression and genital mutilation.

It looks as if Amazon is deliberately playing up the amiable aspects of Islam. But we’re used to this kind of repurposing of language. The person who really gets to the nucleus of the problem isn’t Weiss, but Batya Ungar-Sargon, an opinion editor of Newsweek::

As Newsweek editor Batya Ungar-Sargon has noted: wokeness is, almost always, a smokescreen. By focusing the attention and energy of the rich and powerful on say, whether using the word Latinx is preferable to Hispanic, we let them off the hook for actually doing something about the fact that Latinos remain more than twice as likely to live below the poverty line as whites and Asians.

Batya put it to me this way: “‘Doing the work’ means hiring diversity specialists to call their children white supremacists in a prep school class they can put on their transcript to help their chances of getting into Harvard. It has absolutely nothing to do with asking those who could actually make a difference with regard to true inequality to sacrifice anything of themselves.”

It is an amazing thing to behold Amazon executives LARP as gender studies majors.