I got an email from a reader that intensified some of the worries I have about criticizing the excesses of the Left. As I’ve said repeatedly, I find it boring and unproductive to parrot the opinions of the mainstream media in criticizing the perfidies of the Republican Party, conservatives in general, and Trump. I’ve voted Democratic all my life and consider myself a liberal and on the Left. I voted for Bernie Sanders in the Democratic Presidential primary, and for Biden in the final election.

But what comes more naturally to me when I write for this site, and gives me more chance to express my own views, is to criticize the Left for its excesses, which sometimes reach ridiculous heights. Besides giving me a niche I can operate in, I am pretty sure that the excesses of the Left—including the implicit desire of many for open borders (this is disguised), as well as the “language police” craziness, the inspection of everything, including French cuisine, for racism, and the calls to defund or eliminate the police—are turning people towards Trump and the Republicans. And I’m not the first person to suggest that. To many, the failure of the “blue wave” to materialize in last November’s elections was explained by this kind of Left-wing excess.

Lately I’ve been posting a fair bit about transgender rights, always trying to make clear that I’m pretty much in line with what the mainstream Left thinks, but do think there are aspects worth examining of claims like “a transgender woman is identical to a biological women.” Those include sports, rape counseling, etc. (I don’t give a hoot about who uses what bathrooms; we have multi-gender bathrooms in my department and they’re fine.) But any such discussion is often seen as taboo, and asking reasonable questions can brand you as a “transphobe”. The article below, which appeared in Right Wing Watch, warns how the Right is weaponizing the transgender issue against the Left. Click to read: 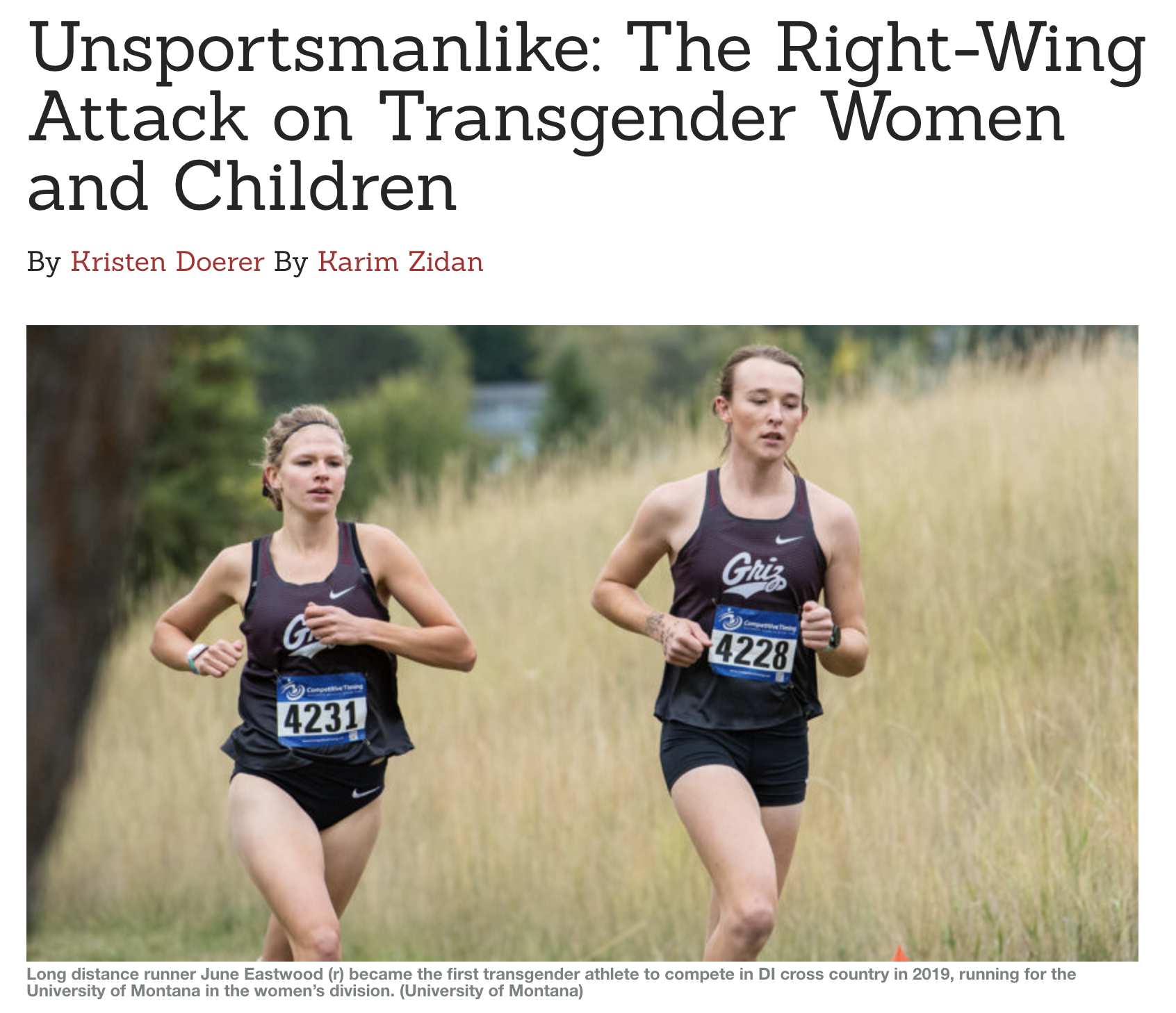 The article, which is pretty good, notes the rise in anti-transgender legislation throughout the U.S., which has been steep, and analyzes the reasons for it. They’re familiar, of course: the mindset of the Christian Right that fears their daughters will be exposed to male genitals, a suspicion of those who don’t conform to “male” or “female” stereotypes, and a desire to weaponize the pro-transgender position of the Democrats to defeat them. Nearly all this legislation springs from Republicans.

And so I worry—often—whether I’m empowering the Right by criticizing some aspects of the pro-transgender wing of the Left (I’ve dealt mostly with sports). I won’t repeat my views here, but suffice it to say that despite my nearly 100% support of transgender rights, I’ve still been called a transphobe and am regularly lectured on email and in nasty website comments (not posted) about my supposed bigotry. These fears were just activated again by the email from my reader, who included these thoughts (I have permission to quote):

I’ve been a supporter of PFAW [People for the American Way] for decades, but….

Sorry I didn’t get this into the recent discussion. [This refers to discussion of transgender issues.] Troubling to me in multiple ways, mostly because it gives the Right multiple reasons for attacking all progressive positions, including LGBTQ equity in other areas:  Guilt by association: If the Right opposes it, it must be good, Renee Richards was outed by Tucker Carlson’s father, therefore bad, it’s equivalent to racist attacks on Black athletes, etc.  None of that speaks to the issues at hand and the same ad hominem and guilt-by-association reasoning could be used against other causes PFAW (and Left in general) favors.

As far as I can see, this reader agrees with me, but, unlike me, the reader doesn’t want to speak up or get involved. And that’s fine—I don’t demand that everyone go public with their views. But I do know this: if some of us with strong opinions—or with doubts about some dogmas of the Left—keep silent because we’re afraid of being ridiculed or called a bigot, we’re surely lost. For if the Left has any principle to which I do adhere, it’s that we should have as much freedom of speech as is consistent with the courts’ interpretation of the First Amendment.  While Mill may have been wrong in feeling that a clash of diverging opinions will always lead us to the truth, or to a rational decision, keeping our mouths shut when we have an arguable and rational case to make will never advance us a bit. Every bit of social and moral progress we’ve clawed out of humanity over the last two hundred years has been the result of free and open argument.

As for me, I’ll keep saying what I think, and reading counterarguments in the hope that my mind is at least partly open. But I have to say that the pushback is getting stronger, and I worry about altering what I say just so I don’t offend people. I’m not nearly as concerned about playing into the hands of the Right, even if we agree on some issues—but for different reasons.

I’m not even sure why I’m writing this except that the email from the reader above activated these concerns, and made me wonder how many others on the Left keep their mouths shut to avoid offending those who are even more on the Left. And how many Leftists also silence themselves because they see they’re agreeing with the Right on some points, feel bad about that, and worry that speaking up may somehow buttress their political enemies?

83 thoughts on “Are we playing into the hands of the Right by criticizing the excesses of the Left?”