I’m told by reader Ken that a number of important Supreme Court rulings are coming out today, and this appears to be the first. By an 8-1 vote, with Clarence Thomas dissenting (see full opinion below), the court showed near unanimity in ruling that Brandi Levy, a Pennsylvania high school student, had not violated the First Amendment by sending out a Snapchat message when she was off school grounds. Click to read the NYT story: 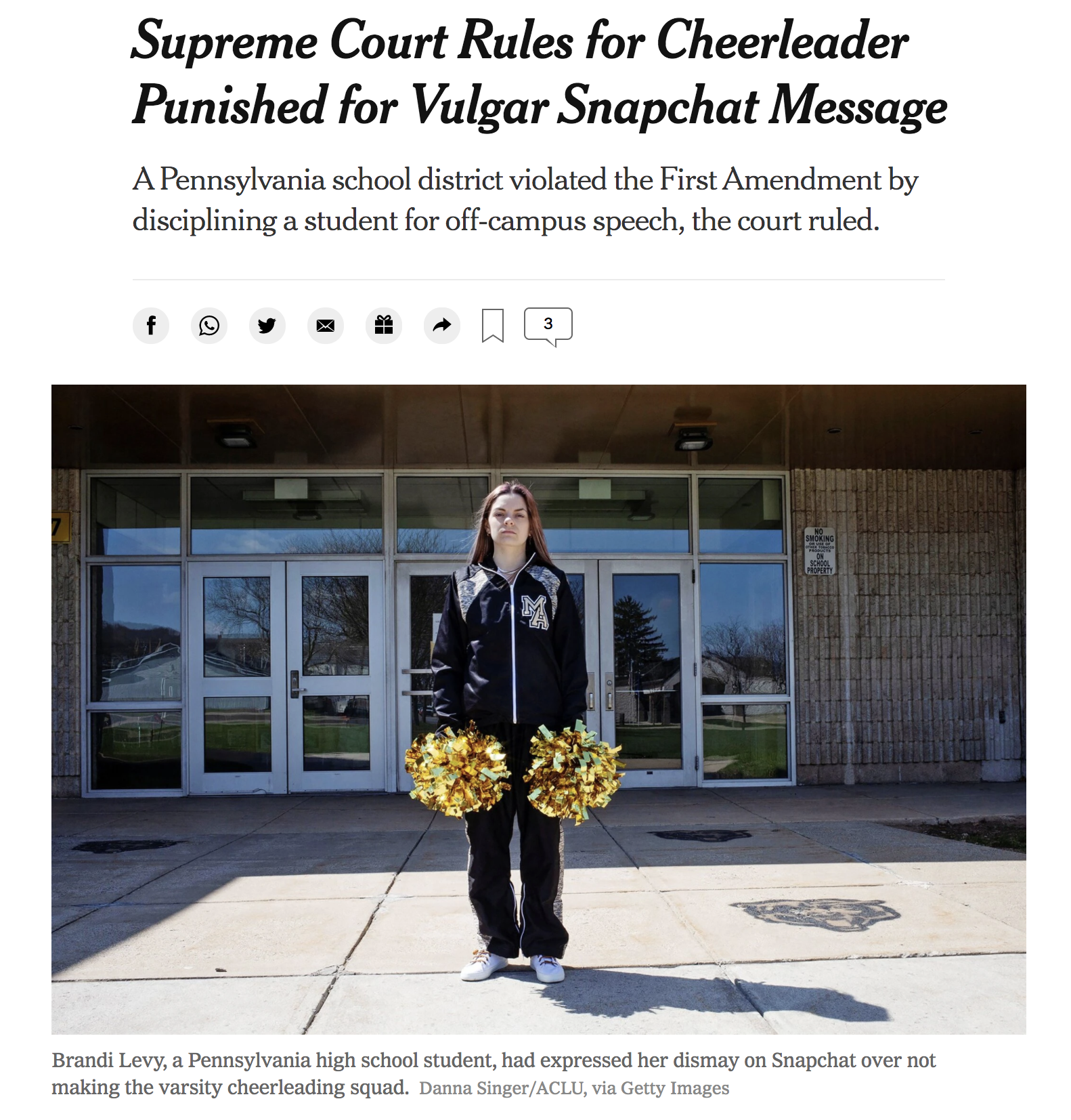 Ninth grader Levy, upset that she didn’t make the varsity cheerleading squad, put out a short Snapchat message with her middle finger upraised, saying, “Fuck school;” “Fuck softball;” Fuck cheer”; and “Fuck everything.”  Although, like all Snapchat messages, it disappeared on its own, someone took a screenshot and called it to the school’s attention. The school suspended Levy from cheerleading for a year, arguing that her speech caused “chaos” and disrupted the “teamlike environment.”

Levy sued and won in a federal appeals court on the grounds that her speech was made off school grounds and was therefore protected by the First Amendment. (The Court previously ruled that students could be punished if their speech was on school grounds and caused “material and substantial disruption” of school functions.) According to the NYT article, though, there was divergence among the judges about why her speech remained protected:

Though the Third Circuit was united in ruling for Ms. Levy, the judges disagreed about the rationale. The majority announced a categorical rule barring discipline for off-campus speech that seemed to limit the ability of public schools to address many kinds of disturbing communications by students on social media, including racist threats and cyberbullying.

In a concurring opinion, Judge Thomas L. Ambro wrote that he would have ruled for Ms. Levy on narrower grounds. It would have been enough, he said, to say that her speech was protected by the First Amendment because it did not disrupt school activities. The majority was wrong, he said, to protect all off-campus speech.

The Supreme Court has limited students’ First Amendment rights since the Tinker decision in 1969. In the court’s last major decision on students’ free speech, in 2007, for instance, the court sided with a principal who had suspended a student for displaying a banner that said “Bong Hits 4 Jesus.”

In general, though, I count this as a victory for the First Amendment. There was clearly no violation of free speech by Ms. Levy saying “Fuck softball/school/cheer/everything”.  I’m not sure about whether the Court’s new ruling really would protect off-campus speech that could include “racist threats” and “cyberbullying”, for some examples of those behaviors could constitute harassment in the work(school)place.

Her speech, though, was clearly off campus, and disruptive though some may have seen it, is not subject to the school’s authority.

I wonder if she’ll go back to cheerleading, or will make the varsity squad.

Here’s the 8-1 opinion, with only Clarence Thomas dissenting on the grounds that whether this speech was really “off campus” is unclear. You can download the pdf by clicking on the arrow to the right.