To me the answer to the question above is a no-brainer: “Of course.” If someone who did a crime is on the loose, then anything that might help apprehend him (most criminals are men) could be useful. That includes height, weight, presence of glasses, facial hair, clothing, and ethnicity. In fact, of all of these identifiers, ethnicity is the hardest to change if you’re fleeing the cops.

And yet the media often (as in this case) quails at specifying the ethnicity of perps, as if somehow that would lead to stereotyping. But I don’t see how it could, unless it simply reinforces those bigots who would say, “See, another X did a crime.” But bigots don’t become more bigoted that way, and it seems to me that the advantage of helping police apprehend a criminal outweighs any considerations of reinforcing racism.

In fact, in this case the newspaper at issue refused to report any identifying information (though clearly race was the hot button) even though the cops already had. And they explained that they left out the information because it might “reinforce stereotypes.” Right then and there you know the criminal is black or Hisptanic.

The incident was the mass shooting in Austin Texas on Friday night, a shooting that injured 30 people, two critically. Here’s the first report (now archived) of two suspects on the loose from the Austin American-Statesman (click on screenshot)

Notice that this was published Saturday morning.  At the bottom of the article, however, is this “editor’s note”:

But in fact the description isn’t too vague to help cops apprehend the suspect, or the public to identify him.  Below is the bulletin issued yesterday morning by the Austin Police Department with the “vague description of the suspected shooter” (click on screenshot). It’s not that vague, and says that one suspect is “described as a black male, with dread locks [sic], wearing a black shirt and a skinny build.”  Surely this is of value in helping apprehend somebody. If someone is caught but doesn’t have dreadlocks, it would be easy to find out if he had them right before the shooting.

The paper clearly saw the police report, which came out the same day as the article above, and I strongly suspect that the paper didn’t describe the one suspect (not yet apprehended when the article came out) not because of vagueness, but because the suspect was an African-American. In fact, I know this is the reason because the newspaper says so: publication of the description “could be harmful in perpetuating stereotypes.”  As I said, this is a strong clue that the suspect is either black or Hispanic, so the disclaimer above is doubly ludicrous. 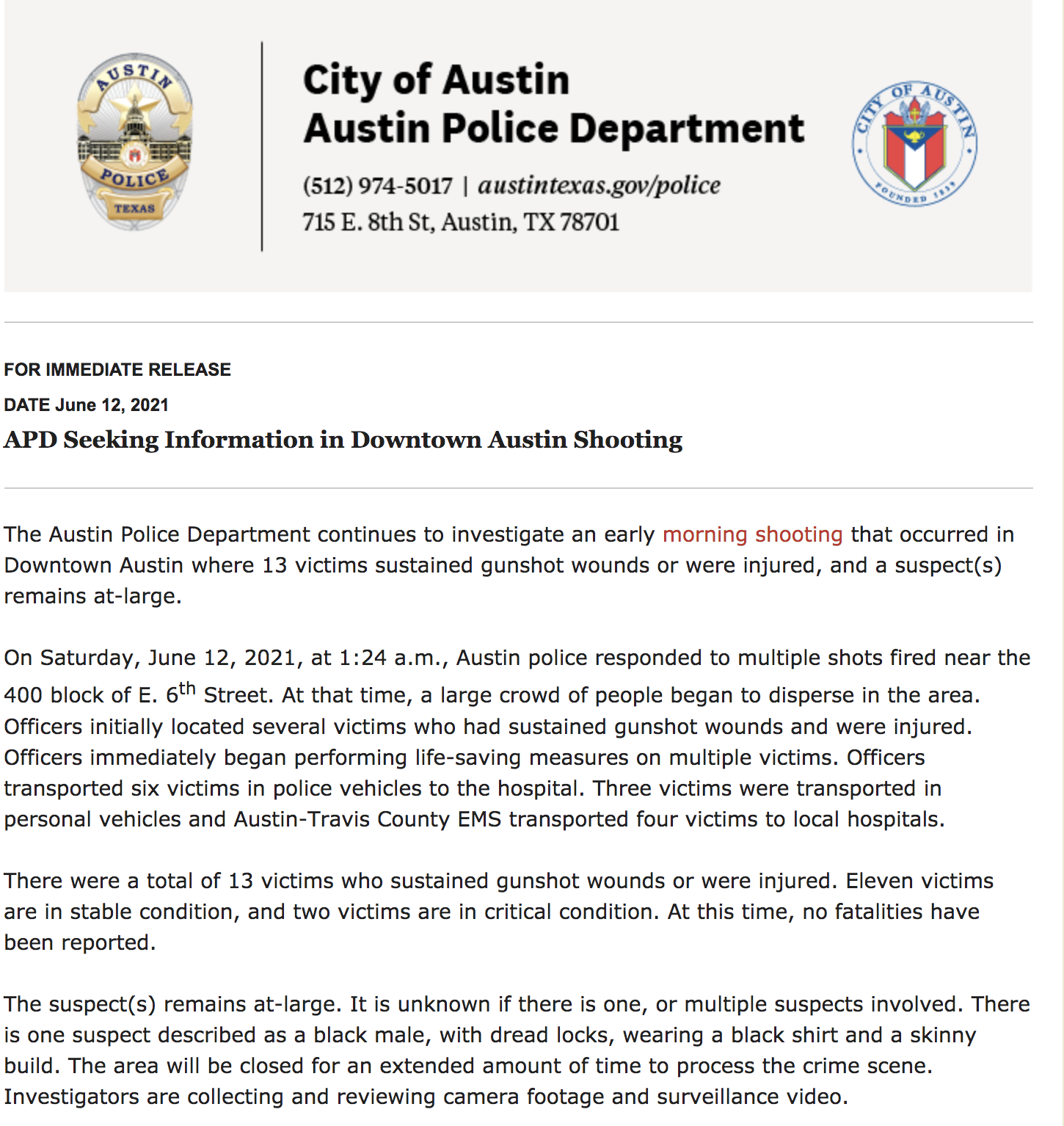 When the suspect was arrested, a later report in the paper (curiously, with the same time of filing) still does not give details of who the suspect is (which is now less relevant except for those who keep track of race). But it has exactly the same disclaimer at the bottom! That makes even less sense.

And their claim that “We will update our reporting” goes up there with “the check is in the mail” as One Big Lie. Remember, we’re talking about a mass shooter here, not a shoplifter or petty burglar.

I’ve seen the unwillingness to identify the ethnicity of unapprehended suspects in other media reports, but that often involves simply omitting identifying details rather than making an explicit statement about why they’re doing it.

We’ve come to a pretty pass when the fear of being called “racist” is so strong that it keeps journalists from giving information that might reduce crime. But sometimes criminal justice must outweigh social justice, particularly when the latter is—as it is here—misguided.

21 thoughts on “Should police and the media release the ethnicity of unapprehended criminal suspects?”