We haven’t had a poll in a while, and of course polls on this site aren’t scientific, because readers are hardly a cross section of America. But they are a cross section of readers—unless, of course, those prone to give answers have some biases. Actually, I do this for myself, just to see how readers feel.

This poll was inspired by an article sent by reader Barry and posted by Ben Cohen on his Substack site, The Banter. You’ll have to subscribe to read it (click below), but some of Cohen’s posts are free, so subscribe if you like them. 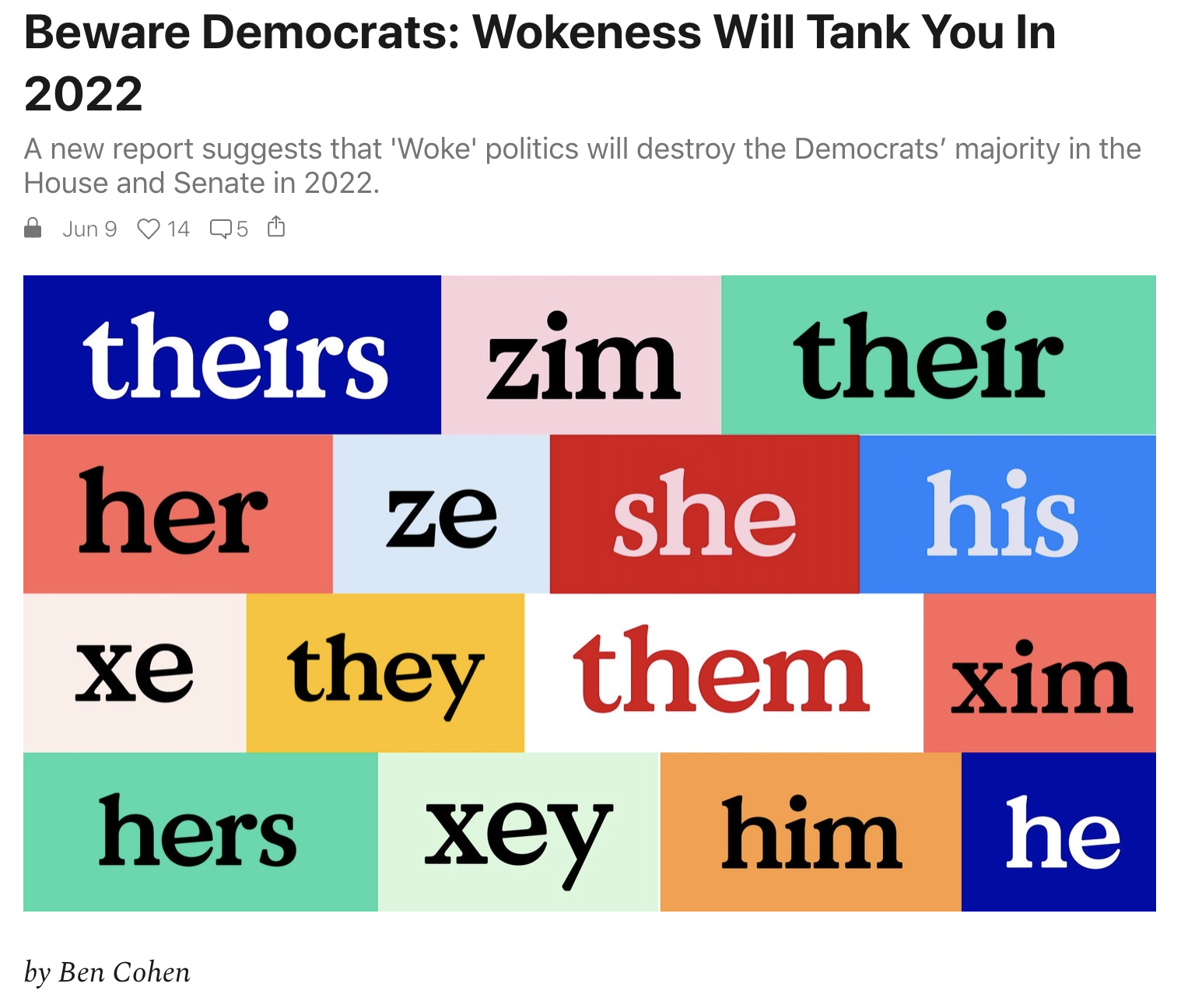 Cohen was inspired by this recent article in the NYT showing that “the party is at risk of losing ground with Black, Hispanic and Asian American voters unless it does a better job presenting an economic agenda and countering Republican efforts to spread misinformation and tie all Democratic candidates to the far left.” (You can read the original report by three groups here.)

But how can a party at war with itself, like the Democrats are now, “rebut Republican misinformation”? Every squabble between the center and “progressive” Left (I have to find a new adjective there) weakens party unanimity and causes Republicans on the sidelines to chuckle.

It turns out that, as many of us knew, identity politics and Wokeism are largely endeavors of white people on the progressive Left. Issues like “defunding the police” or drastically opening up the border don’t go down so well with voters of color, who are concerned largely with economic issues (who isn’t?)  Here are two quotes from Cohen’s piece:

The major issue with the identity politics movement is not necessarily the ideology itself. If you ignore the more militant aspects of it, there are many necessary, noble and good ideas embedded in it. From understanding structural racism to the complex issues faced by the LGBTQ community, identity politics can offer an interesting lens through which to examine them. The biggest problem though, is the right’s ability to magnify the extremist elements of the movement and unfairly tie the Democratic Party to it.

I don’t spend a huge amount of time talking about the identity politics left because it isn’t a dangerous movement like the far right is, and although influential, it is still relatively small. But if you follow the right wing media, you would be forgiven for thinking that Black Lives Matter was an offshoot of Al Qaeda, and Nancy Pelosi was ordering militant lesbian doctors to abort the fetuses of good Christian women around the country. The more mainstream identity politics gets, the more Republicans are able to use it as a rallying cry for their bigoted policies and distract voters from the good the Democrats are doing in office. Furthermore, it is helping Republican efforts to drive more conservative minorities away from the Democrats.

Cohen adds that of course the Democrats’ biggest problem isn’t the Woke among us, but Trumpism, which—despite my efforts to ignore it—appears to be waiting nearby in the wings, and still dominates the GOP. But the ruling political party tends to lose in the midterms, and our Democratic margin is already damn thin.

When Biden won, I worried that his administration would be too woke, and that that position would hurt the Dems down the line. It turns out that Biden isn’t that woke, and has been doing some pretty good stuff, but he’s always being pressured by the   Authoritarian Left, and I wonder about his ability to withstand that pressure. (Pelosi’s presence helps.) We don’t want to lose the House and—Ceiling Cat forbid—the Senate in next year’s midterms.

Do you think the wokeness of the “progressive” wing of Democrats might turn the tide for the GOP? I have no definite opinion, but I worry.  So give your answer to the poll below and your explanation in the comments, please.

And yes, I know that Trump is a bigger danger than, say, “the squad,” so I needn’t be apprised of that.

38 thoughts on “A poll: Will wokeism hurt the Democrats in the midterms and in 2024?”