When I first saw the paper below, which is still on the pages of the Journal of the American Psychoanalytic Association—a journal I expected to be peer-reviewed journal and have a modicum of rigor even if it is about psychoanalysis—I thought it was a joke: a hoax “grievance” paper à la Pluckrose, Lindsay, and Boghossian.  But I don’t think it is. Instead, it’s a horrid, racist gemisch of obscurantist chest-beating in the guise of antiracism. Click on the screenshot to read it, or download the pdf here. (The full reference is at the bottom of the page.) 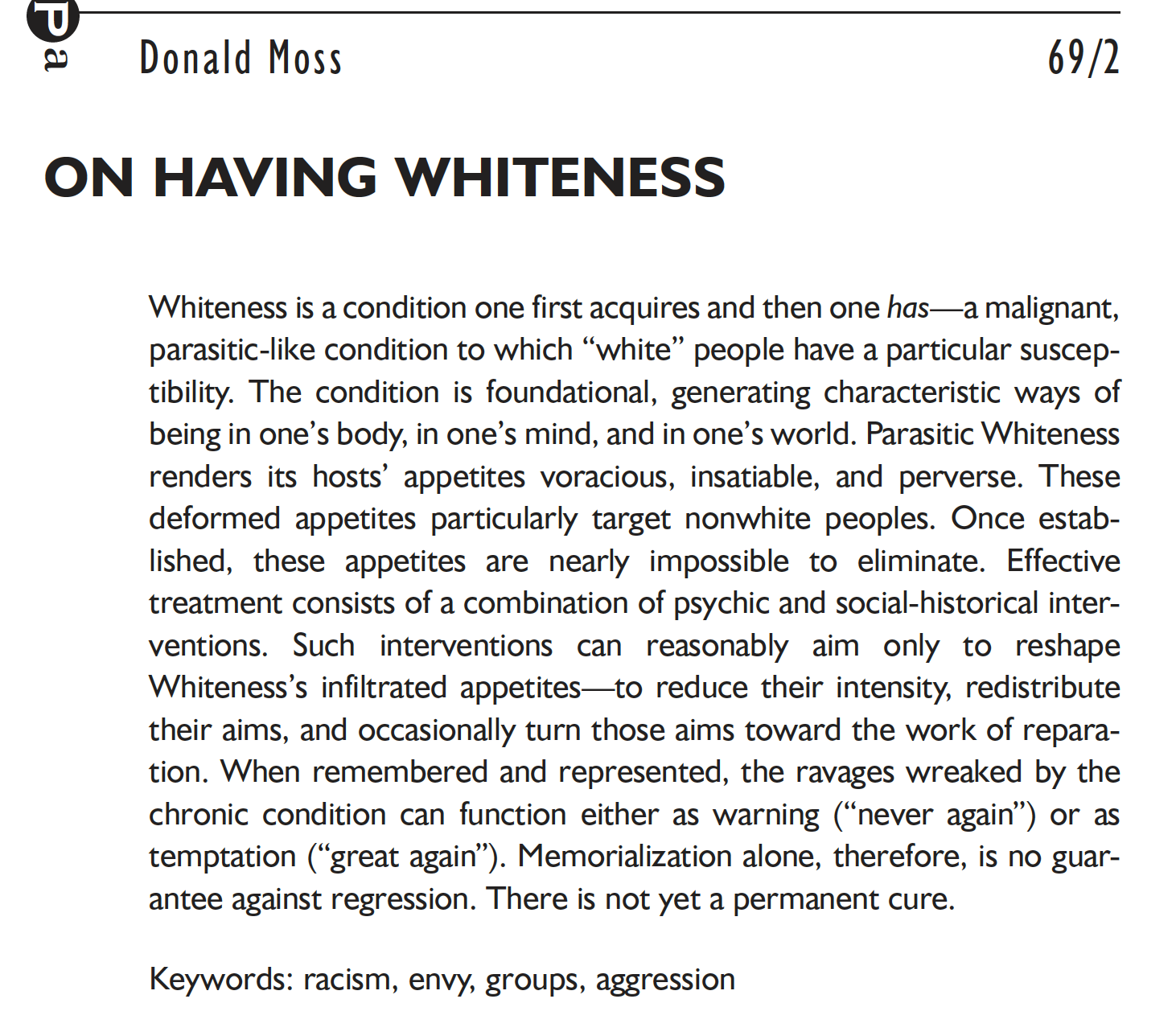 Just three quotes, besides the abstract above, give the tenor of the paper:

Parasitic Whiteness infiltrates our drives early on. The infiltrated drive binds id-ego-superego into a singular entity, empowered to dismiss and override all forms of resistance. The drive apparatus of Whiteness divides the object world into two distinct zones. In one, the Whiteness-infiltrated drive works in familiar ways—inhibited, checked, distorted, transformed—susceptible, that is, to standard neurotic deformations. In the other, however, none of this holds true. There the liberated drive goes rogue, unchecked and unlimited, inhibited by neither the protests of its objects nor the counterforces of its internal structures.

. . .Parasitic Whiteness generates a state of constantly erotized excitement, a drift toward frenzy.1 Fix, control, and arouse; want, hate, and terrorize. Whiteness resides at this always volatile edge, in a state of permanent skirmish, always taking on the never obliterated resistances of its nonwhite objects. Opaque to itself and hyperconscious of those objects, Whiteness pursues the impossible, a stable synthesis, an end point. It can therefore never rest. Blindly, then, it continues forward, unendingly bent on conquering. There seems no backward path, no mode of retreat. It faces an interminable forward march. If only it could totally and permanently transform these objects, turn the once feared and unknown into the now reduced and measured; turn the once unique and overwhelming into the now fungible and owned.

Whiteness originates not in innocence but in entitlement.

. . . Psychoanalytic work, then, need not properly target Whiteness itself here. Instead, it can effectively target the psychic receptor sites that provide Whiteness the interior vertical mapping on which it depends. The vertical map disrupts the identificatory bond that might once have bound subject to object. The bond persists, though, reshaped and hardened now into a vertical format. Identification morphs into disidentification, similarity into difference, affectionate care into sadistic cruelty. Diminish the spread and influence of these interior vertical receptor sites and, indirectly, the parasite of Whiteness is dislodged, loosed, itself becoming susceptible to exposure, as a differentiated and alien presence. Psychoanalytic work, in its most radical, fundamental, and, finally neutral forms, targets any and all of the effects of vertical mapping. Where verticality was, there horizontality will be.

Ah, the termites are dining well!  Imagine if this paper used any ethnicity other than “whiteness”. It would not have been publishable, and the author would have been damned and demonized forever for racism. Indeed, I’m baffled why the editor of this journal even published the screed. It appears to say nothing beyond whiteness being a parasitic infection of the mind that needs to be cured by psychoanalysis (of course).

Is this a joke or a hoax? I don’t think so. The author has written quite a few articles for the journal and is identified at the article’s end this way:

Here’s a photo of Moss from the NY Post: 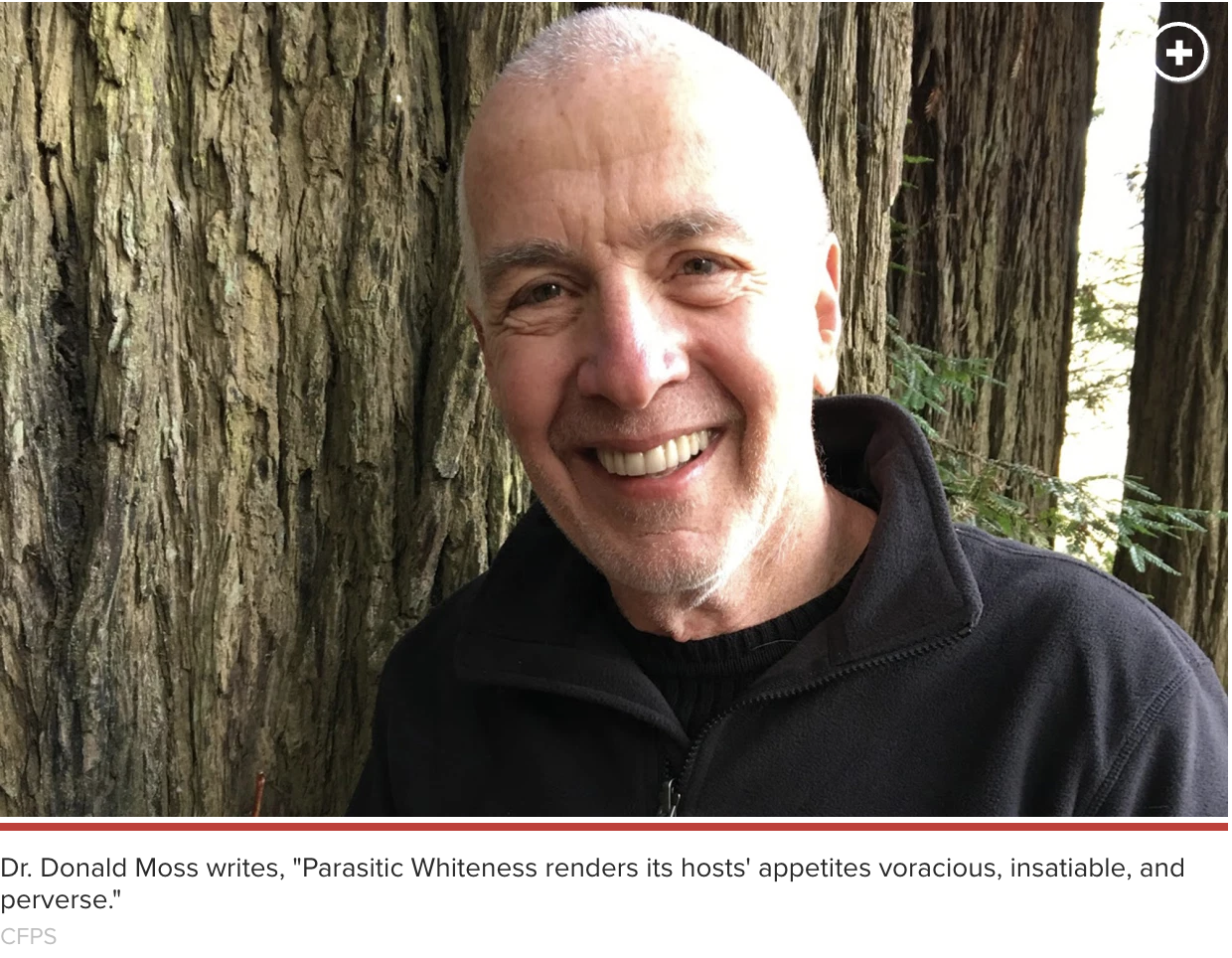 Now there’s a different Donald Moss, another physician, who hastened to tweet that he wasn’t the guy who wrote this execrable paper. I don’t see the “correction and apology” on the website, though.

My name was misidentified as author of an article in Journal of the American Psychoanalytic Association about the “malignant, parasitic-like” condition of “Whiteness.” I did not author this article and am pleased to see that the publication has issued a correction and an apology.

Lee Jussim, a psychologist at Rutgers, points out the similarities between Nazi racism and Moss racism:

"Judaism is Ruin, Destruction, Downfall&Murder!"
"The Jew is such a parasite!"
Quote from Nazi speech, 1944:https://t.co/UWUWDlq3uP

I don’t want to delve further into this steaming pile of psychoanalytic scat, as you can read the paper for yourself, and perhaps delve further into the writings of Dr. Moss. But you can conclude two things. First, this Donald Moss is off the rails, perhaps in need of treatment himself (but not psychoanalysis!). Second, the Journal of the American Psychoanalytic Association has no credibility and, apparently, no standards.

I wonder what his colleagues at the NYPI are thinking. . .

43 thoughts on “A new paper by a psychoanalyst looks like a hoax, but isn’t”