The two screenshots below are to the same op-ed at the New York Times by Michelle Goldberg, but the title obviously got changed somewhere along the way.  And no surprise, either, for the subject of the article, well summarized by the article’s first title below, is an admonition so horribly bigoted and unempathic that I couldn’t believe it. The editors obviously changed the title to make it look less horrible. (Goldberg describes herself as both a “progressive” and a “secular Jew”.)

I read this article four or five times, trying to convince myself that it didn’t say what it seemed to say, but I couldn’t dissuade myself, and now others have agreed with me. This is what her message seems to be:

People should stop physically assaulting Jews in America for being Jewish, because that makes it harder for us to criticize Israel and its “apartheid” government.

In other words, what should help deter physical attacks on American Jews is not just empathy for other people, or a resistance to religious-based bigotry, but also the notion that the sympathy engendered by the anti-Semitic attacks in America make it less likely for people to criticize Israel for its clear “apartheid” and “anti-Palestinian” policies. How craven can somebody be?

To be fair, Goldberg does at least admit that the anti-Jewish attacks in America are horrible (by Gad! She’d better!)

In the article with the new title, I’ll give some quotes below defending my interpretation of what she says: 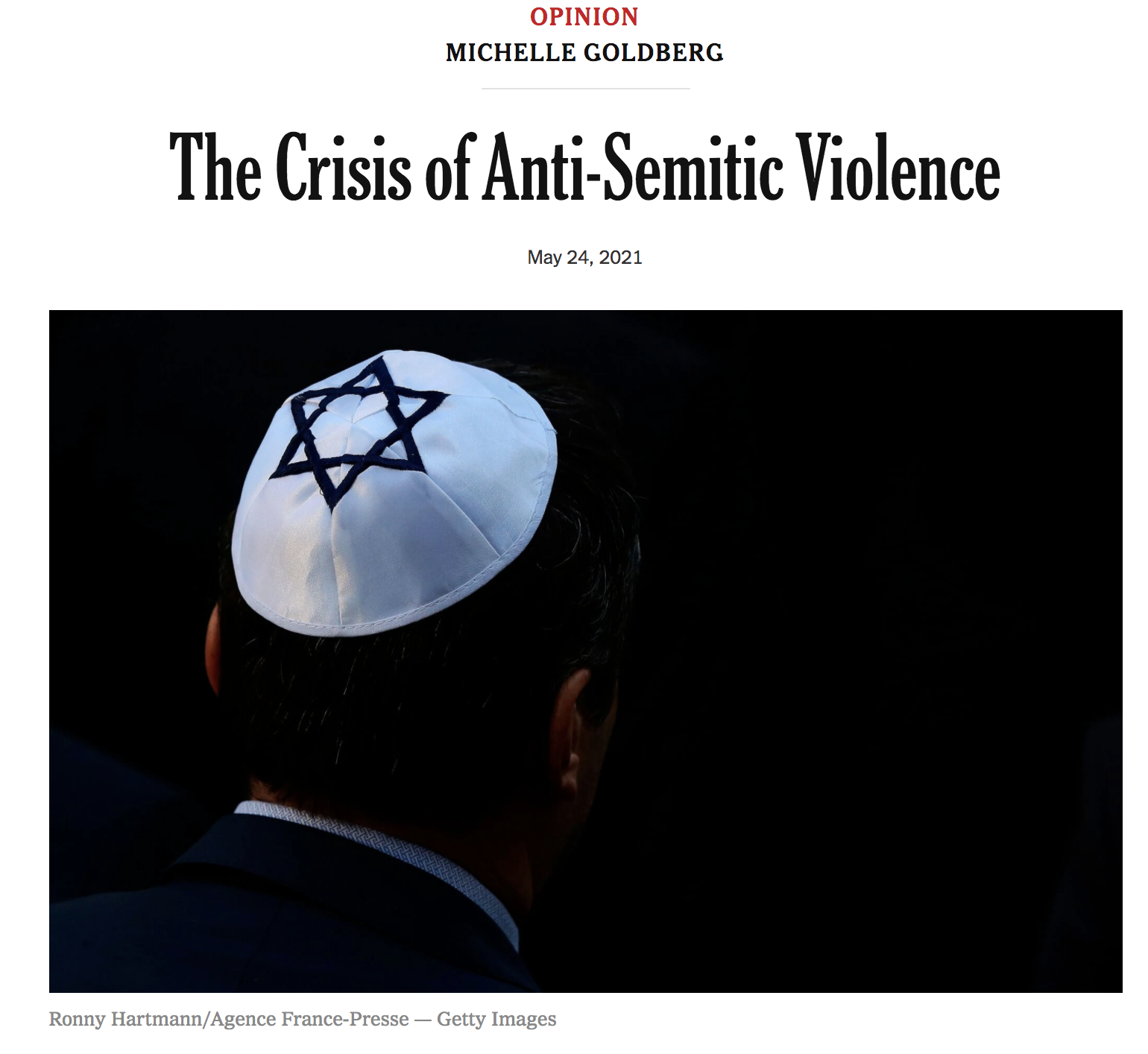 Quotes from this article:

But this [American anti-Semitic] violence also threatens to undermine progress that’s been made in getting American politicians to take Palestinian rights more seriously. Right-wing Zionists and anti-Semitic anti-Zionists have something fundamental in common: Both conflate the Jewish people with the Israeli state. Israel’s government and its American allies benefit when they can shut down criticism of the country as anti-Semitic.

Many progressives, particularly progressive Jews, have worked hard to break this automatic identification and to open up space in the Democratic Party to denounce Israel’s entrenched occupation and human rights abuses. This wave of anti-Semitic violence will increase the difficulty of that work. The Zionist right claims that to assail Israel is to assail all Jews. Those who terrorize Jews out of rage at Israel seem to make their point for them.

Goldberg then segues into the familiar (but, to my mind, largely unfounded) claims that Israel is an oppressor state and is rife with institutionalized apartheid. One would expect that someone like Goldberg might point out that of all the states in the the Middle East, including the Palestinian Territories, Israel is the state least likely to be accused of apartheid, and those repeated accusations ignore not only the reality of Arab participation as citizens in Israeli life, but the fact that in Israel there is far more equality for gays, women, apostates, and non-majority religionists (like Muslims) than there is in Palestine, Saudi Arabia, and similar places. Were Goldberg to given a choice to live her life as a woman in Gaza versus Israel, wouldn’t she flee to Israel ASAP? The repeated declarations of Israeli apartheid, like the one from Human Rights Watch below, are, in my view, simple manifestations of anti-Semitism. What other reasons are there for singling out Israel for demonization and palpably ignoring the far worse treatment of its citizens by Palestine? It can’t be “whataboutism” because Palestine is never singled out by the Western press.

Nor does Goldberg mention the rockets fired into Israel by Hamas in an attempt to kill Israeli civilians, while the IDF attempts to avoid killing civilians. Is that willy-nilly targeting of civilians not a war crime? Isn’t Palestinians’ refusal to allow gays to be openly gay, for women to be fully free, and for Jews to even live in Palestine a better example of apartheid? If not, why not? Explain to me, please, how Israel is more of an “apartheid” state than is Palestine.

But then comes the familiar litany, which is wrong given that Israelis desire peace with Palestine, and have offered them peace multiple times, only to be rejected. Hamas will not be satisfied until Israel is wiped off the map, and “Palestine is free, from the river to the sea.” Goldberg:

Israel’s treatment of the Palestinians is often so shocking that just describing it neutrally seems defamatory; when Human Rights Watch decided, last month, to accuse Israel of the crime of apartheid, it was because the facts on the ground left it little choice. As Eric Goldstein, acting executive director of H.R.W.’s Middle East and North Africa division, wrote in The Forward last month, it’s not just that Palestinians live under relentless Israeli oppression.

“What’s gone is the possibility of saying, with a straight face, that it is temporary,” he wrote. “Israeli authorities today clearly intend to maintain this system of severe discrimination into the future — an intent that constitutes the third prong of the crime of apartheid.”

And once again, Goldberg emphasizes that attacks on Jews in the U.S., who are not Israeli citizens, make it harder to criticize Israeli apartheid:

It’s awful irony, but anti-Semitic violence helps shore up this system by strengthening the taboo against calling it what it is. I get the sense that some people on the left find talking about violence by Palestinian sympathizers embarrassing; it certainly doesn’t receive the same sort of attention as white nationalist attacks. But it should be treated as a crisis, both as a matter of basic human solidarity and because it’s a political danger.

And, at the end, Goldberg again pays lip service by decrying American assaults on Jews, which doesn’t take much courage. But as far as I can see, the “political danger” she mentions above is that this violence mutes the voices of those who would criticize Israel. It shouldn’t, though, for Israelis are a querulous lot and not loath to criticize their own government. But every bit of evidence shows that it is Israel, far more than Palestine or Hamas, which wants peace. To ignore this is to show a willful ignorance of history in the service of a misguided and woke ideology.

At any rate, to write a column arguing that attacking American Jews is bad in part because it makes it harder for the world to criticize Israel represents to me the height of woke hypocrisy—coupled with a reprehensible lack of empathy. You shouldn’t attack Jews in America, or any place else, simply because they’re Jews and that’s simply bigoted violence. War is a different issue, but it’s hard to call Hamas’s deliberate firing of rockets at civilians anything but a war crime. The IDF tries to avoid killing civilians, but that’s hard because Hamas places rockets near civilians, as if they want civilian casualties.  Hamas deliberately tries to kill civilians, which of course is what suicide bombing is about.

Lest you think my interpretation of Goldberg’s piece is wonky, at least one other person agrees with me: Jonathan Tobin writing at the Jewish News Syndicate. (An article like his, of course, could never be printed in the NYT, which, except for some columns by Bret Stephens, specializes in anti-Semitism these days.) Click on the screenshot to read:

One quote from Tobin:

In a gobsmackingly tone-deaf column that was published in print with one of the most egregious Times headlines in recent memory—“Attacks on Jews Are a Gift to the Right”—Goldberg did write that she didn’t approve of Jews being attacked in the streets. Her main complaint, though, was that those who victimized Jews in the name of “free Palestine” were giving a bad name to the anti-Zionist cause of which she is one of the most prominent Jewish advocates.

Goldberg, who has a large following on Twitter under her @Michelleinbklyn handle, has used her prominent perch on the Times’ opinion pages to promote the idea that denying the right of Jews to a state in their ancient homeland is the sort of idea that fashionable Brooklyn “progressives,” including Jews, should embrace.

. . .If there is violence against Jews either here or in Europe, Goldberg prefers to blame it on supporters of Israel who, not unnaturally, consider it their duty to speak up for the embattled Jewish state. She thinks they share common ground with anti-Semites because they “conflate the Jewish people with the Israeli state.” But while Jews elsewhere shouldn’t be blamed for what Israelis do, her linking of those who rightly understand that Israel is integral to Jewish identity and peoplehood to hatemongers is itself a crude calumny. Progressives like herself, who want to eliminate Israel, actually have far more in common with anti-Semites who share that objective.

Criticism of Israel isn’t the issue. Israel isn’t perfect, but people like Omar and other supporters of the anti-Semitic BDS movement don’t attack Israel for what it does, but for what it is. More to the point, if you think the only country in the world that needs to be eliminated is the sole Jewish state on the planet, then clearly you do have a problem with Jews.

That last paragraph pretty much summarizes the “progressive” Left’s actions and beliefs about Israel. I have little doubt that people like Omar, Tlaib, and Ocasio-Cortez favor the elimination of Israel, even if it be by the untenable “one state solution” that would mean genocide for the Jews.

21 thoughts on “An unbelievably invidious op-ed in the NYT: Americans shouldn’t physically attack Jews because it inhibits our ability to criticize Israel”