In today’s trifecta, we first see how a mother leopard teaches her cubs to cross the road. Note how she looks back to urge them on and how one gets a bit wary in mid-road before it’s scruffed. Listen to their cute little “roars”!

From Popsugar we have the most awesome science fair project ever that answers the burning question, “Does your cat’s butthole really touch all the surfaces in your home?”

Well, not only are you not alone, but you’ve also got some answers, thanks to an industrious sixth-grader named Kaeden Griffin. For his homeschool science fair project, Kaeden tackled one of the most perplexing questions stumping pet owners: “Does your cat’s butthole really touch all the surfaces in your home?”

Kaeden, like many others out there, assumed that if his cat sits on a surface, then their “butthole will also touch said surface,” and to test his hypothesis, he and his mom, Kerry, applied nontoxic lipstick (bright red lipstick, in fact!) to the buttholes of their two well-behaved cats. The cats were then given a series of commands — including sit, wait, lie down, and jump up — and were compensated with praise and treats. The lipstick was removed with a baby wipe once they collected the necessary data, which took place in less than 10 minutes.

Still, she said that “chances are favorable that your cat’s butthole has not and will to touch all the things and surfaces in your home.”

I love the idea of putting lipstick on a cat’s butt as a way of testing this hypothesis; it’s very clever.

When I was in Paris I came across this framed drawing on a napkin, hung on the wall of the formerly great restaurant “L’Ami Jean”.  Matthew told me it was a famous Belgian cartoon character, “Le Chat” (“the cat”), drawn by artist Philippe Geluck and published in Le Soir for thirty years. 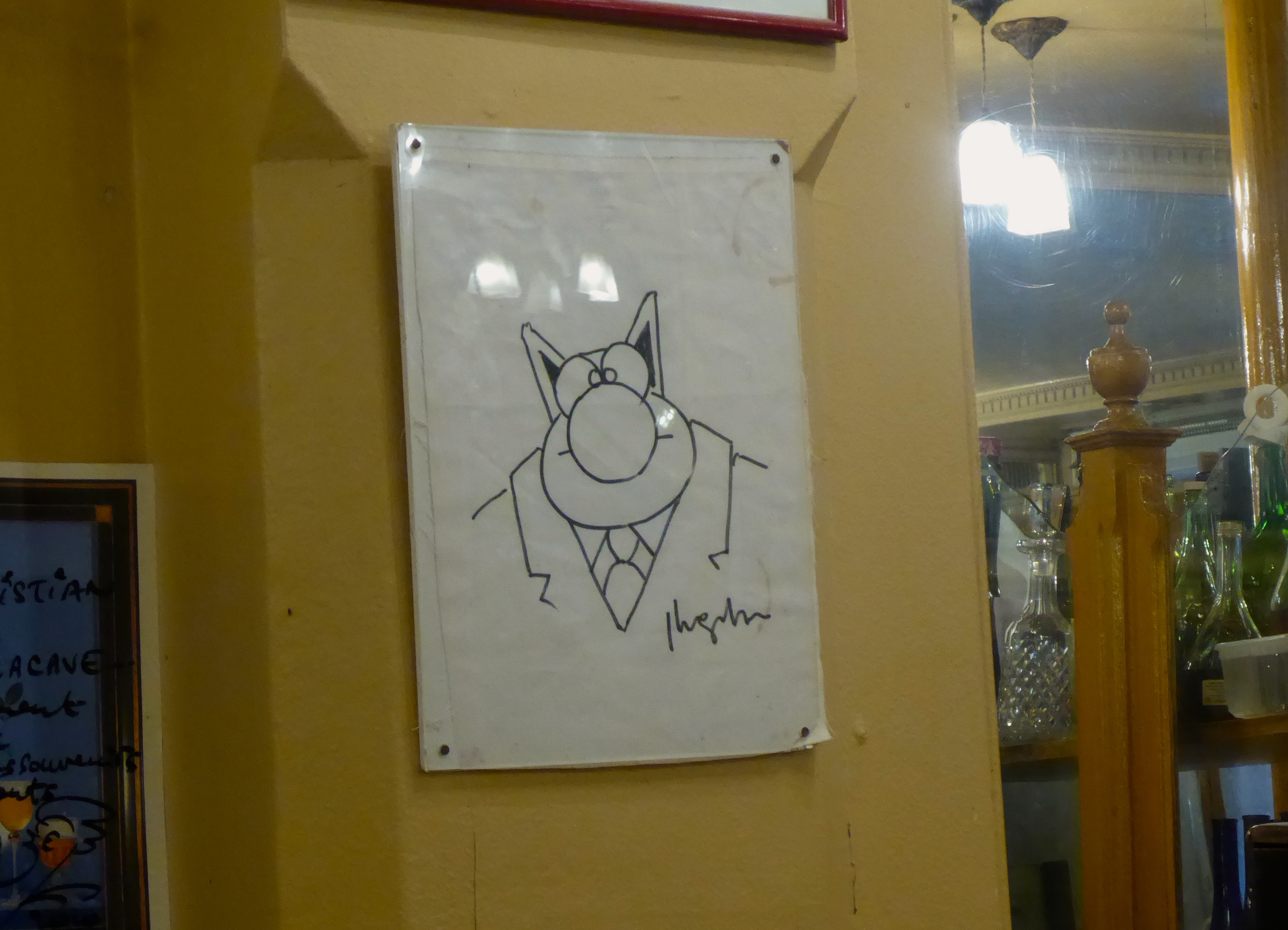 Now, according to The Guardian (click on screenshot below), Brussels has approved the construction of a Musée du Chat near “the location of some of the country’s most respected cultural institutions”. It’s to be partly financed with public money, and artists are upset that a cartoon cat is getting its own Museum. 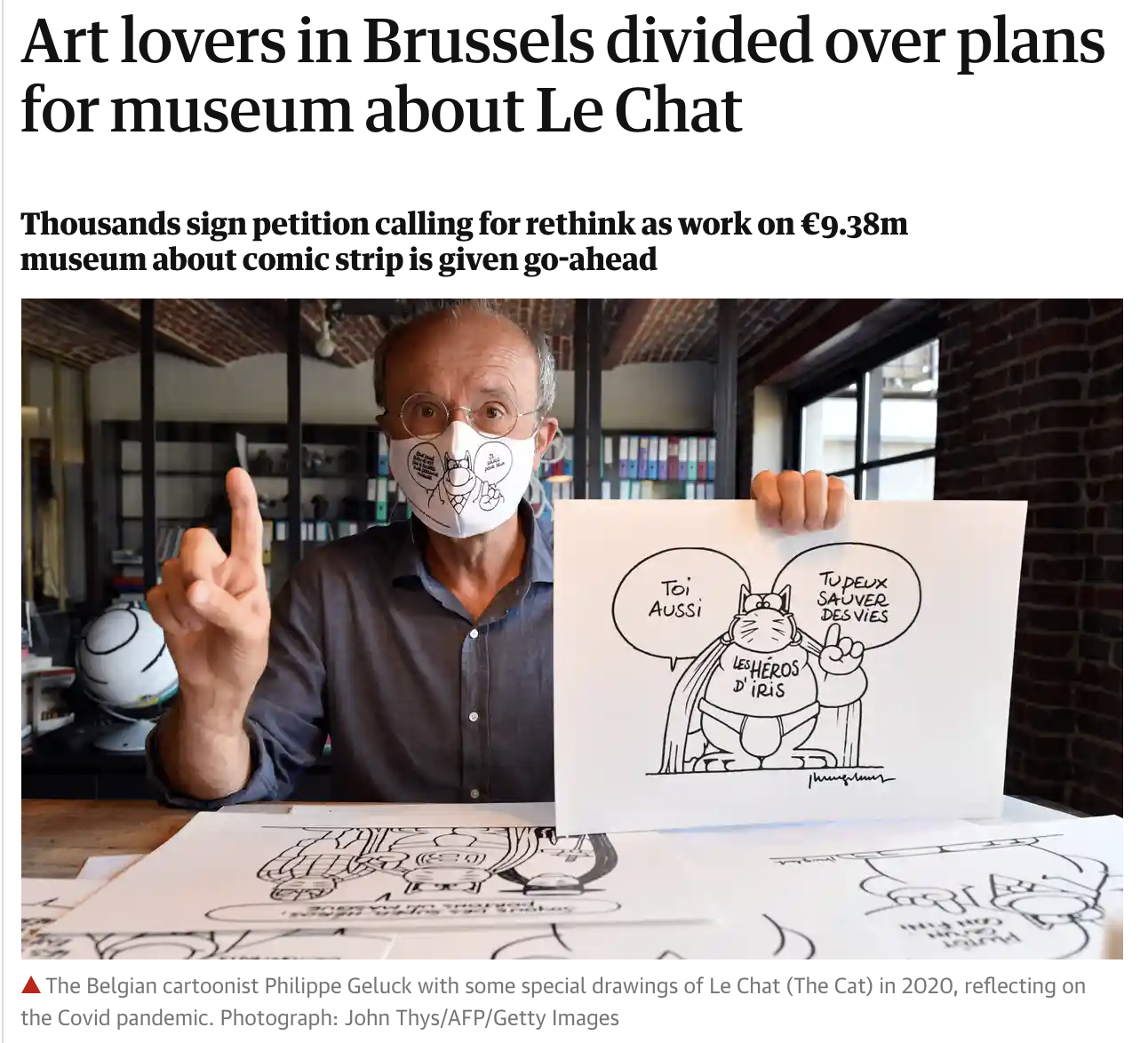 The decision by the Brussels-Capital Region to give building approval for the Musée du Chat on Rue Royale, the location of some of the country’s most respected cultural institutions, has prompted what artists Denis De Rudder and Sandrine Morgante have described as “feelings of incomprehension and concern, even consternation and revolt” in a letter and petition addressed to Rudi Vervoort, minister-president of the Brussels-Capital Region.

Le Chat, a comic strip in which readers are invited to enjoy the absurd reasonings of an expressionless human-sized cat in a suit, appeared in Le Soir, an evening paper, by the Belgian humorist Philippe Geluck from 1983 until 2013, becoming something of an iconic figure among the French-speaking Walloon community in Belgium. A statue of Le Chat, depicting the character holding an umbrella that rains water down from inside, was erected in the centre of the Belgian town of Hotton in 2008.

On Thursday, the Société d’Aménagement Urbain (SAU), the body responsible for building public infrastructure in Brussels, was issued with a planning permit allowing it to start construction works on the new museum’s seven floors and 4,000 sq metres of floorspace.

The internal works are being paid for by Geluck but the public financing of some of the building’s €9.38m price tag has been described as a “provocation” by those concerned that the country’s celebrated Museum of Modern Art, located on the same road in the historic centre of Brussels, close to the Musée Magritte Museum featuring the works of Belgium’s most famous surrealist artist, has been closed since 2011 awaiting a promised renovation.

It looks as if the Musée du Chat will nevertheless be going forward: the Guardian reports a scheduled opening in 2024. In the meantime, here’s that statue of Le Chat in Hotton: 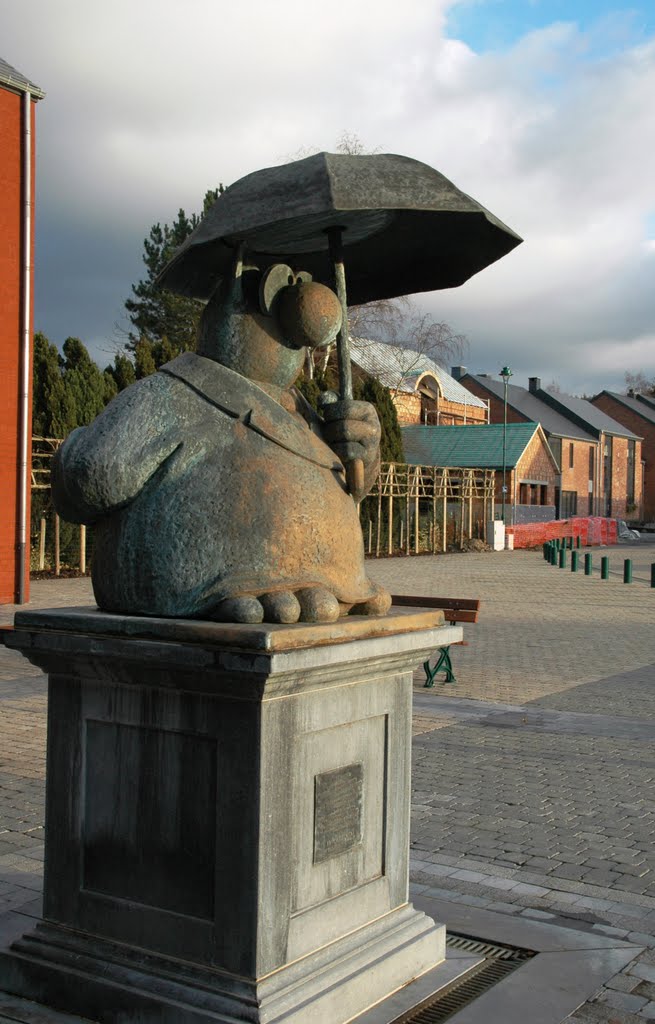 And a Le Chat cartoon. My translation: “I have invented this watch with two dials. The first tells you what time it is. The second tells us what time it will be in one hour.” 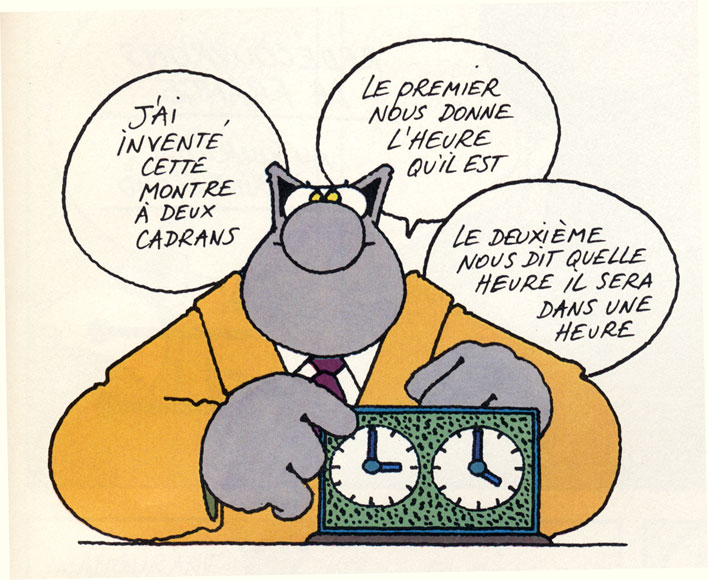 Langniappe: Here’s an etsy shop that sells handmade brass cat and mouse door knockers. I’ll show a few; note that they aren’t cheap! (This one is $1,350.) The rat is the knocker, and I can’t say that I would want one of these, as they’re a bit gruesome, but they’re also clever and pretty: 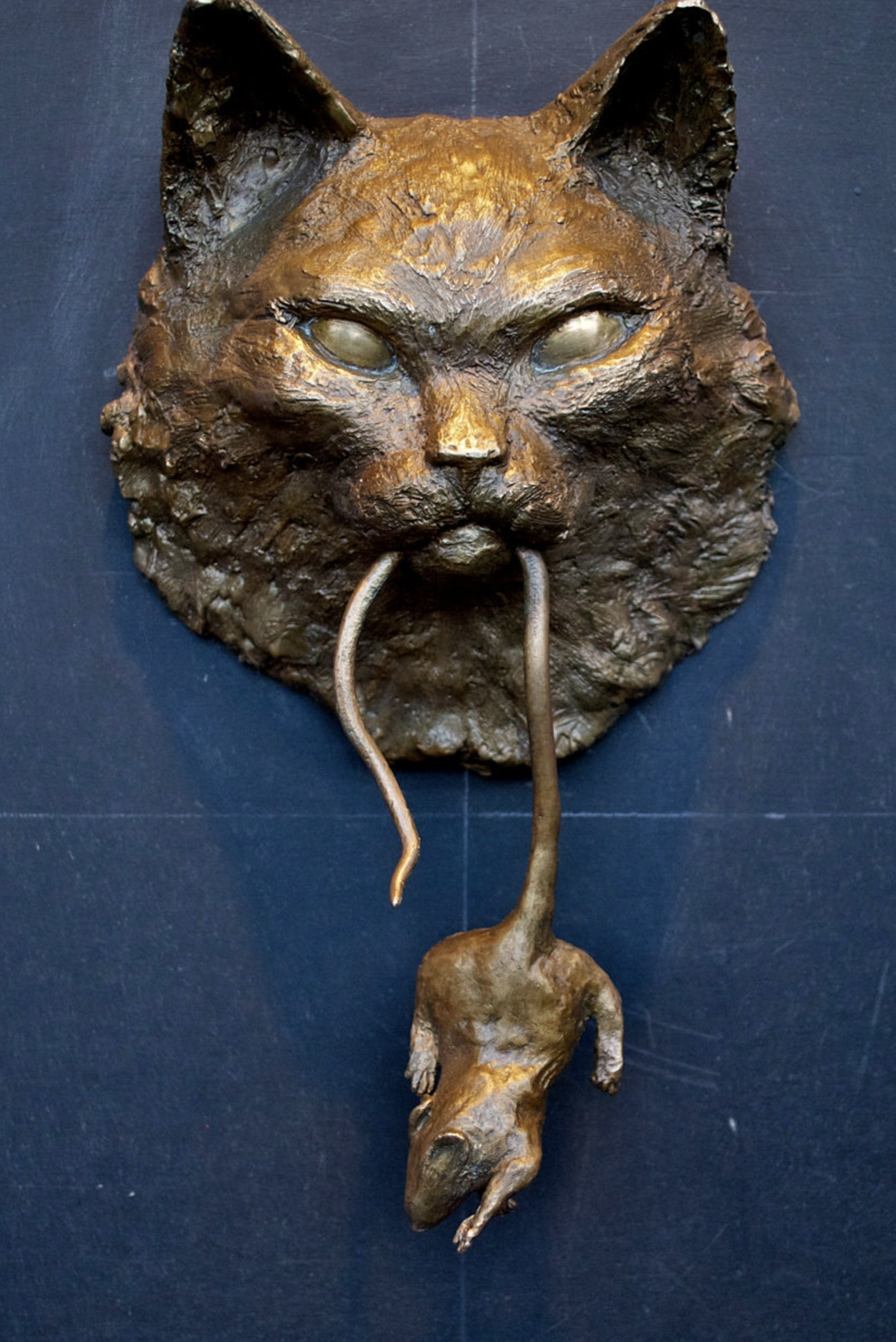 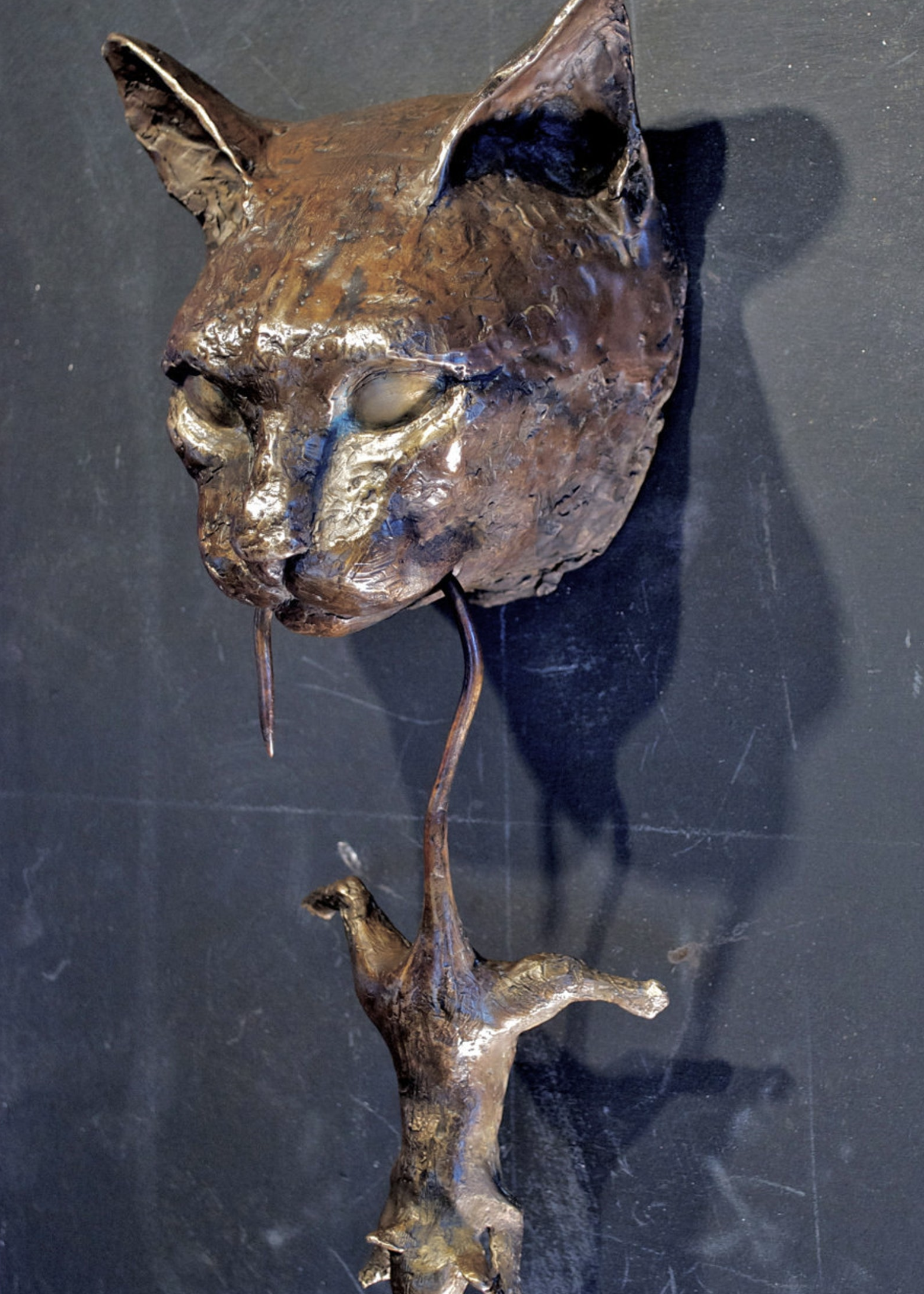 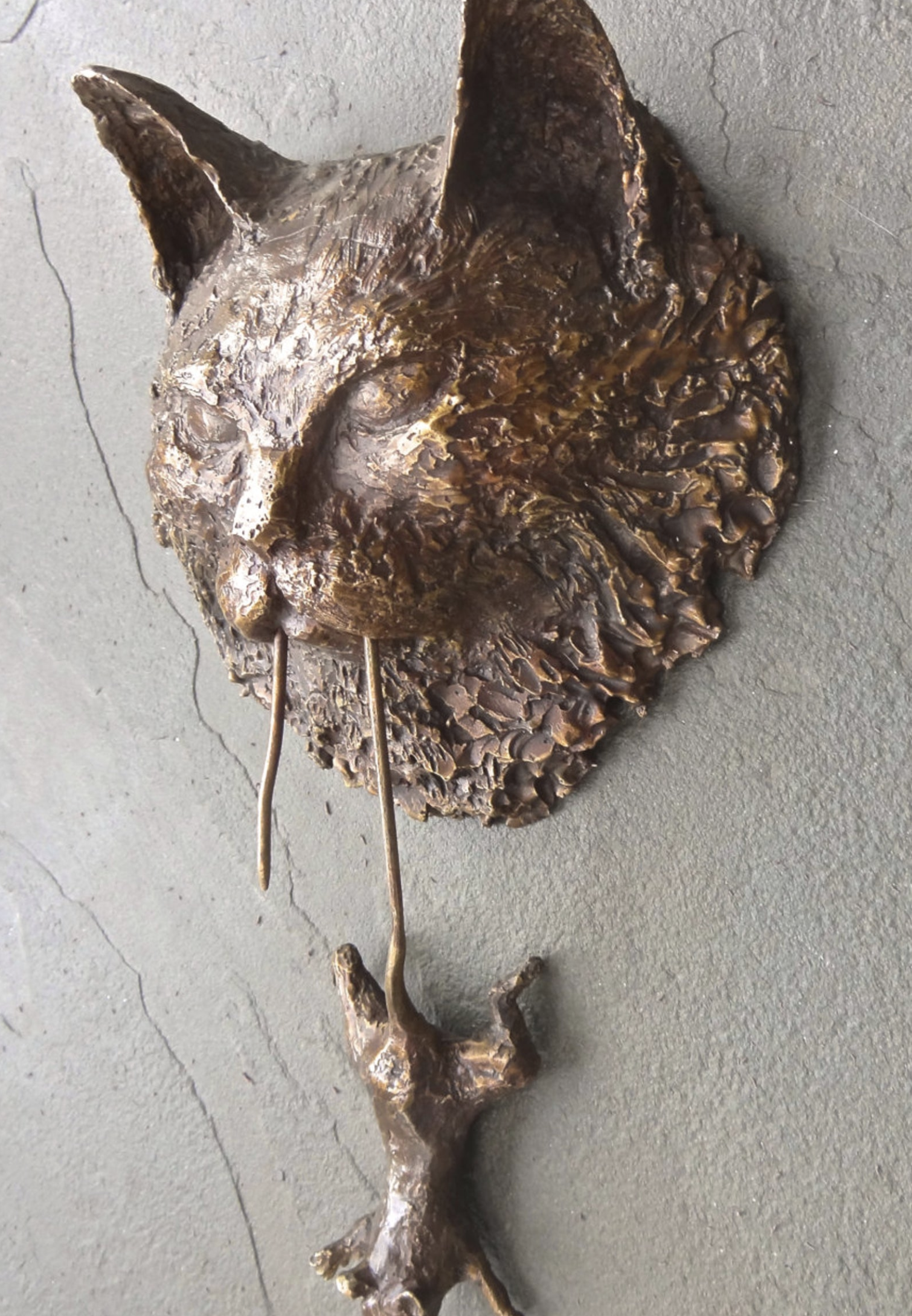 The artist, whose store is called “casadelgatto”: 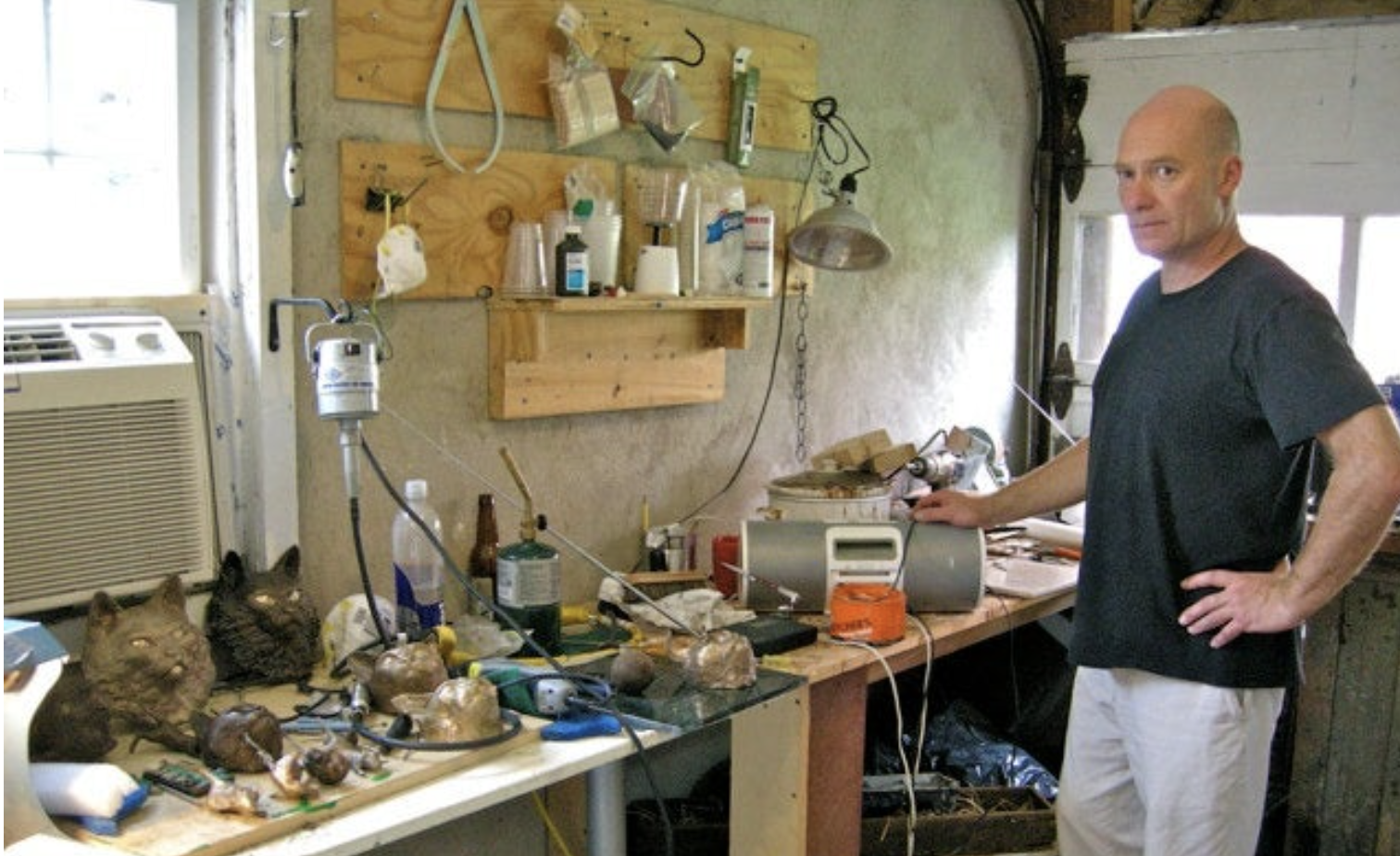 11 thoughts on “Caturday felid trifecta: Why did the leopard cross the road?; do cats rub their butts on everything?; controversy about “Le Chat” museum; and lagniappe”