Today’s photos come from reader Tony Eales in Queensland. His captions are indented, and you can enlarge the photos by clicking on them.

I recently went on a citizen science weekend called the Cooloola Bioblitz. This consisted of guided survey and collecting, IDing and cataloguing of life within the Cooloola Section of the Great Sandy National Park. There were many teams with different foci and interests. I was with the spider group for the weekend but we were encouraged to photograph and/or collect anything that caught our eye and the results are being uploaded into iNaturalist.

While there’s something to be said for just getting out into nature by yourself =, which I do as often as I can, it’s amazing what many eyes all searching a given area can turn up. I thought I’d share some of my favourite observations.

First is a small species, Araneus transversus, which I have been looking for for some time. They weave a small orb web across the surface fold of a large leaf and sit on the underside of this horizontal web. I gently encouraged it out of the web to take a photo of the hockey-mask looking abdomen. 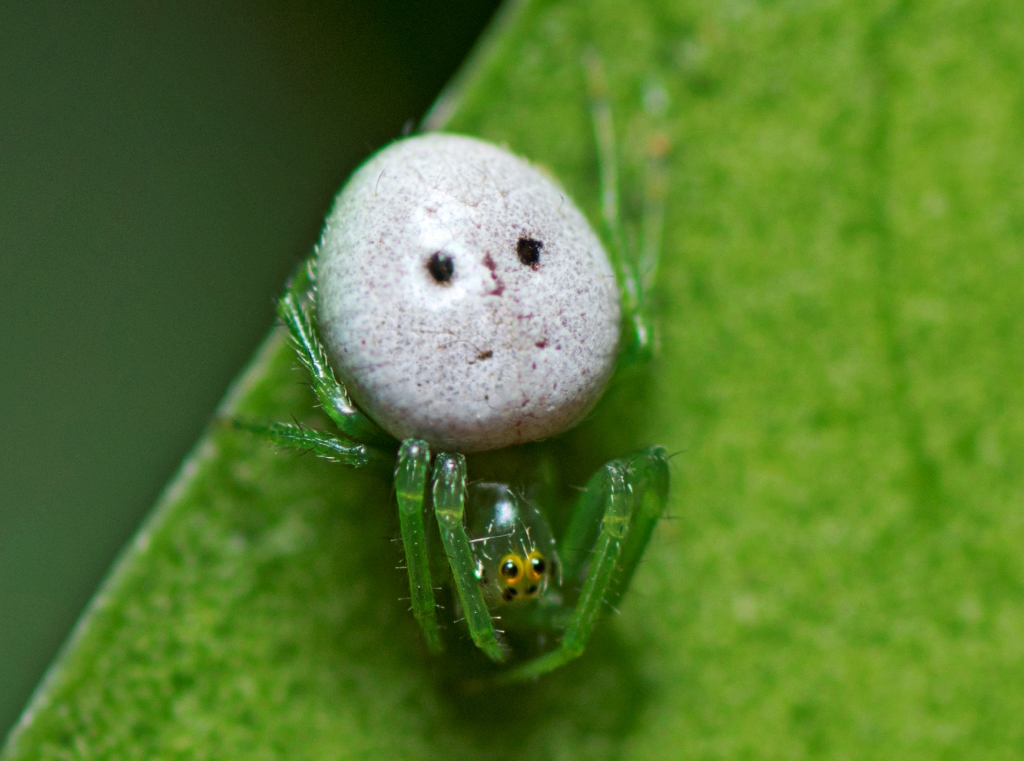 Next is from my favourite family of spiders, the Australiasian endemic Arkydidae family. Arkys dilatatus, here shown happily consuming a small fly. 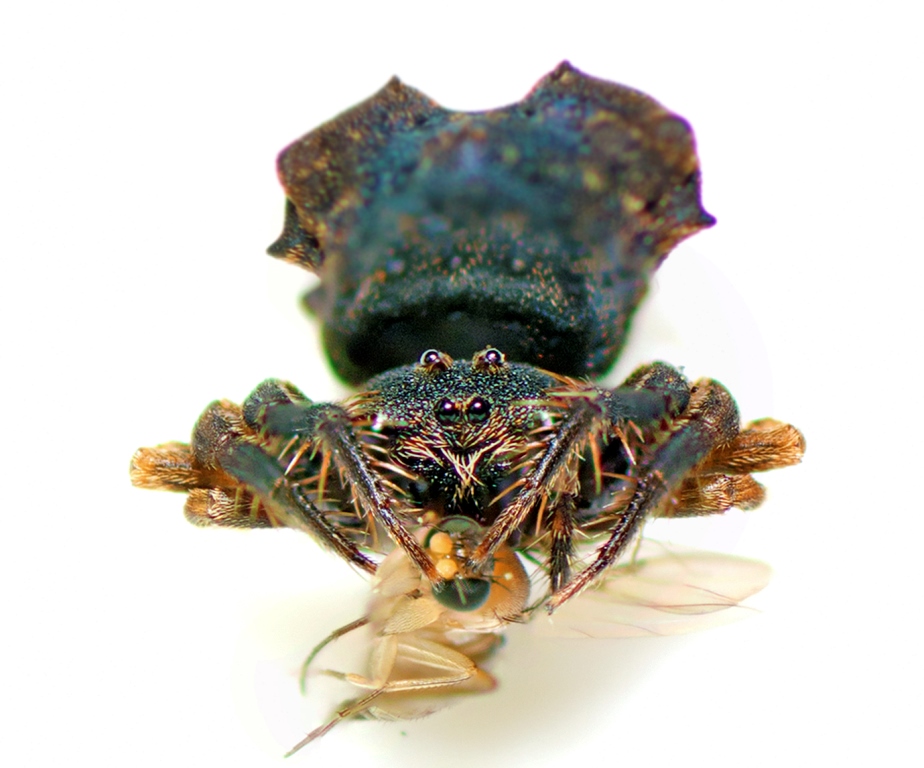 Hands down the find of the weekend for me was this undescribed Crab Spider, Phrynarachne sp. While it is well known that this genus is in Australia, so far there are no described species from this location. My son found this specimen which he thought was some bird droppings on a leaf until it, in his words, “suddenly grew legs and started walking”. Not only does this spider look remarkably like bird poo, it also smells really sour and bad, something we never tired of demonstrating to people by opening the vial it was in and inviting them to take a whiff. 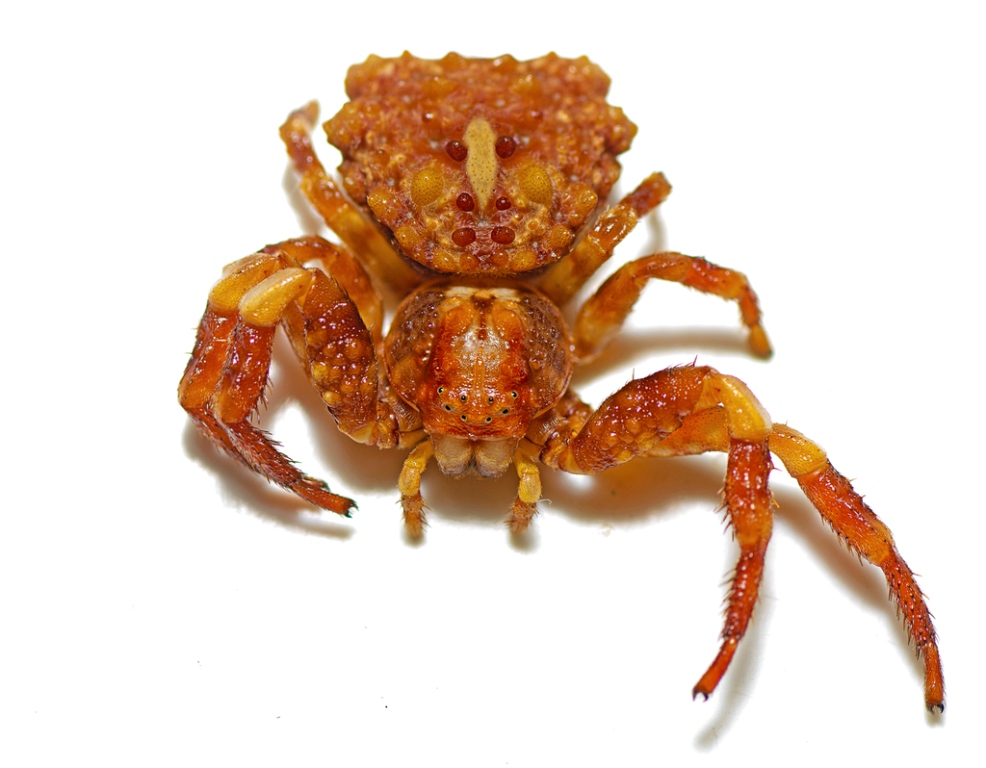 We found many of the strange Gasteracantha quadrispinosa. If I have a second favourite group of spiders it is these Gasteracanths. They’re colourful, shiny and spiny. 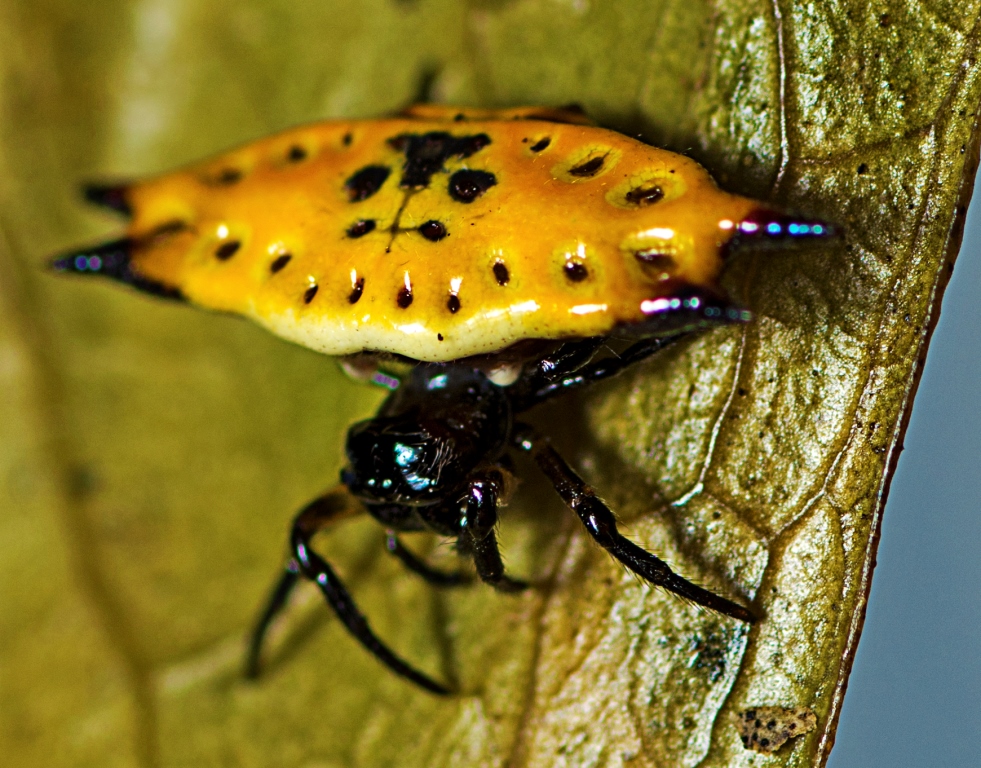 We spent the better part of half a day searching the grass for a peacock jumping spider species that had been reported here a year ago, well outside of its usual range. Alas, to no avail. But we did go to the sand dunes to look at the Maratus anomalus peacock jumping spiders we knew were there. 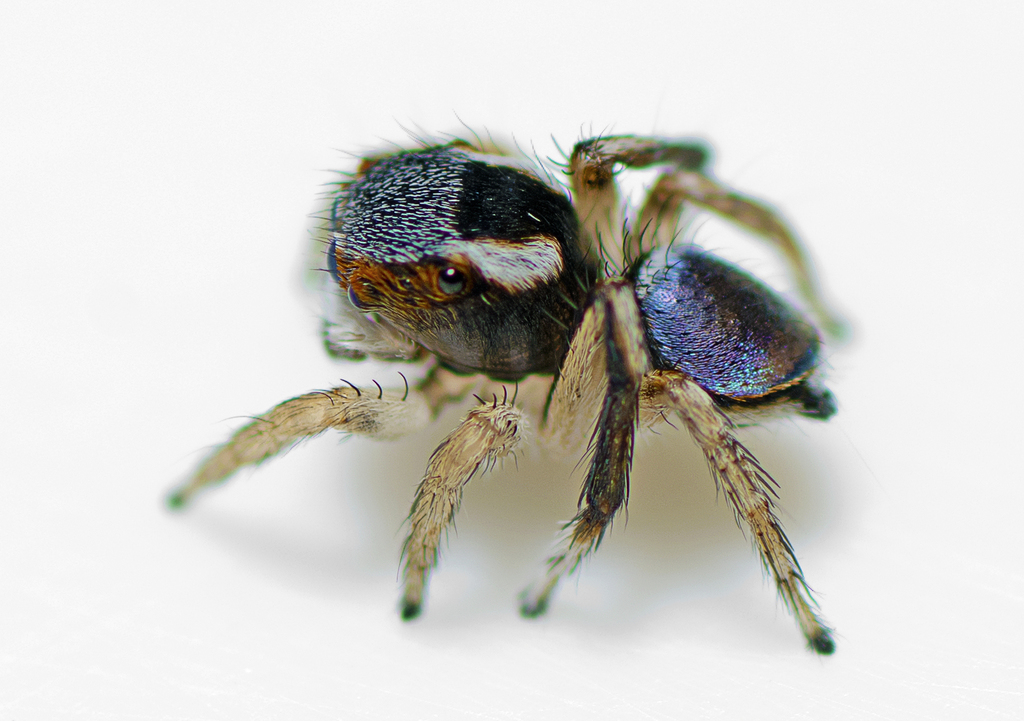 The rainforest section was full of these net casting spiders, Menneus sp. The common net casters are also known as ogre-faced spiders for their gigantic forward-facing eyes. Menneus on the other hand have small pin-prick eyes that still seem to do the job, allowing the spiders to drop their net on any passing beetle or other prey item walking past. The net is made of a different type of silk that does not have the sticky globules but is instead woolly. It tangles up all the claws and spines and legs and wings of the prey, holding it fast for wrapping and consumption. 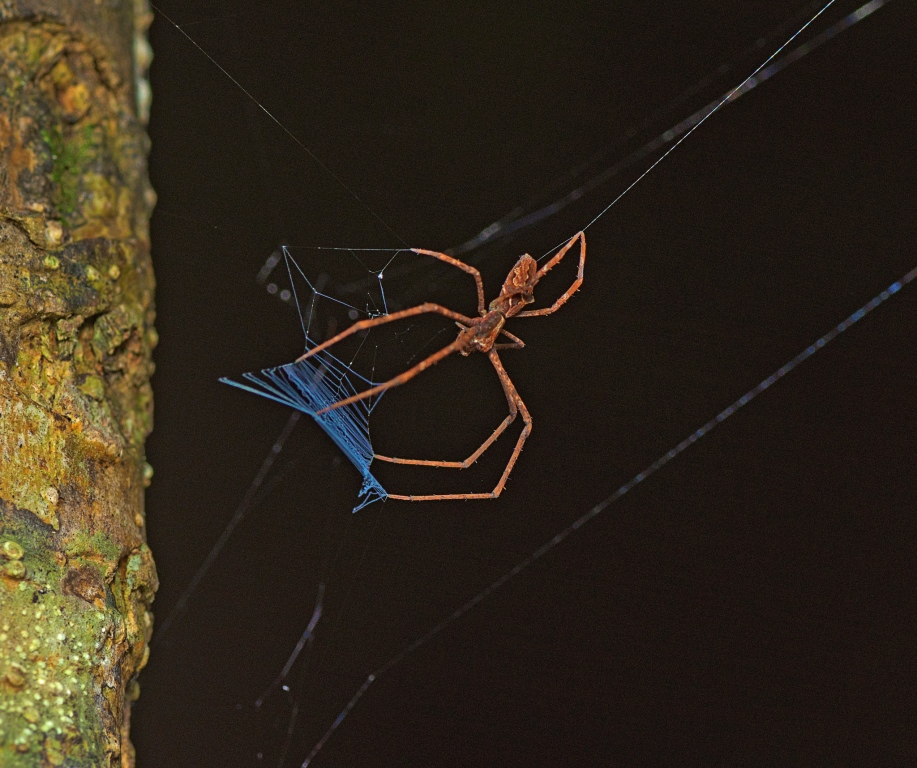 We also came across a few oddballs one doesn’t normally encounter. A strange mite in the family Erythraeidae was uncovered while sifting through leaf litter. 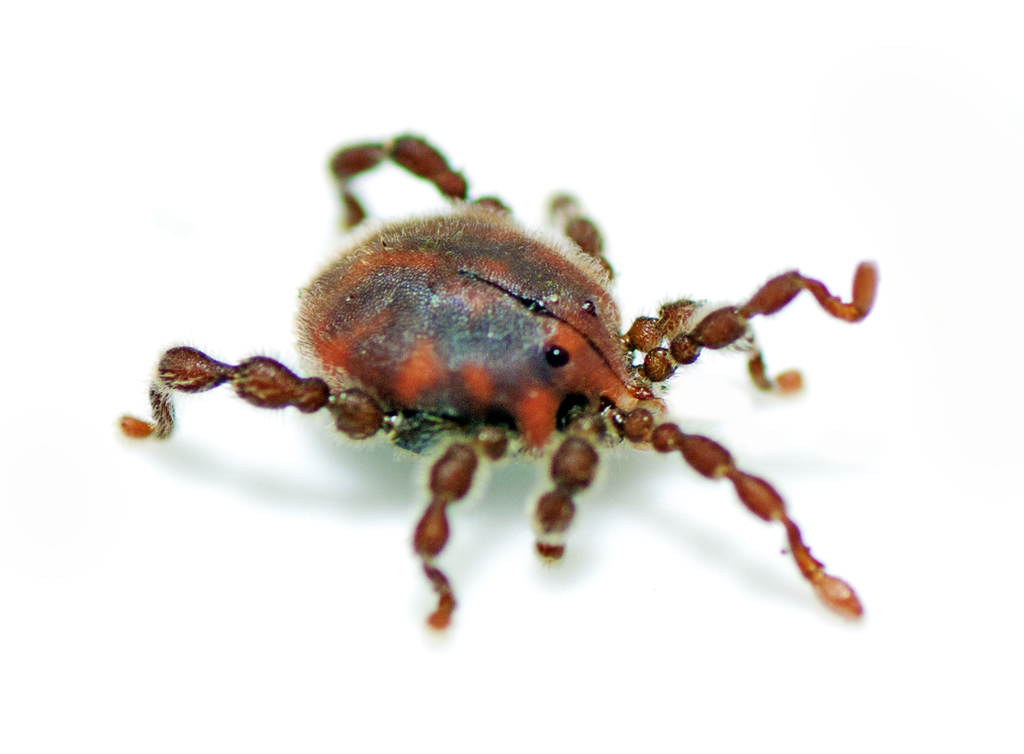 In the rainforest section at night were members of the insect order Archaeognatha or Jumping Bristletails, in the family Meinertellidae. They sat on the trunks of palm trees grazing on lichens under the cover of darkness. 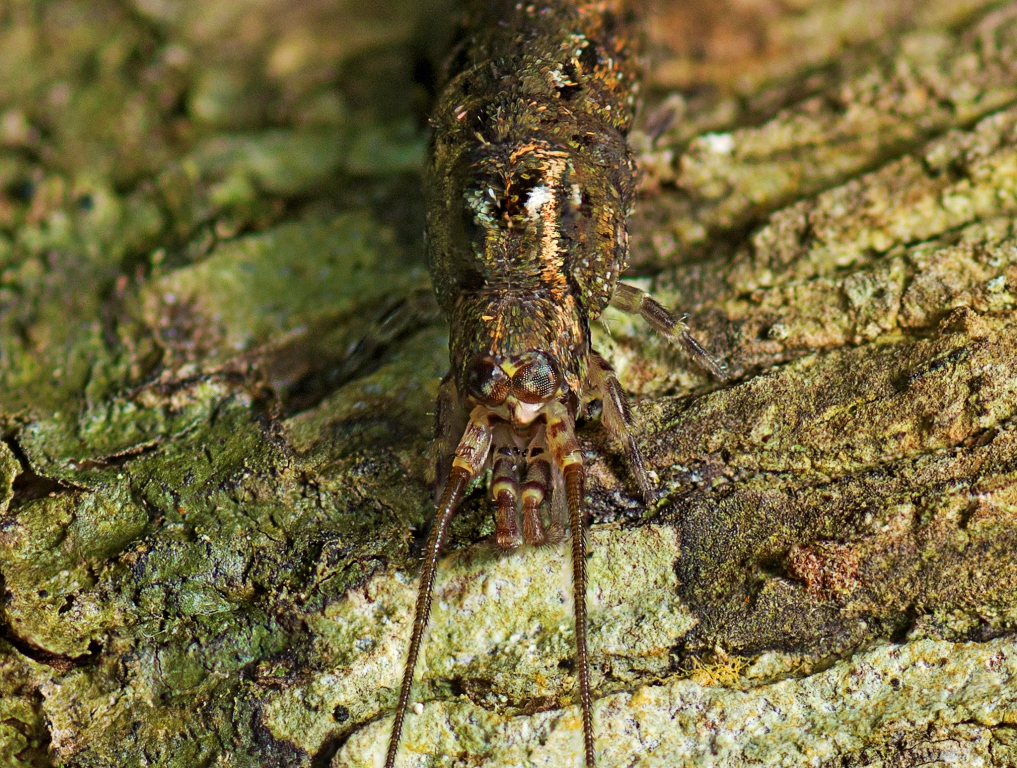 Phlyctaenodes pustulata was sitting on a leaf during my nightwalk in the rainforest. I don’t know too much about these beetles. The warty elytra is unusual for this family and the huge eyes are presumably for night vision. 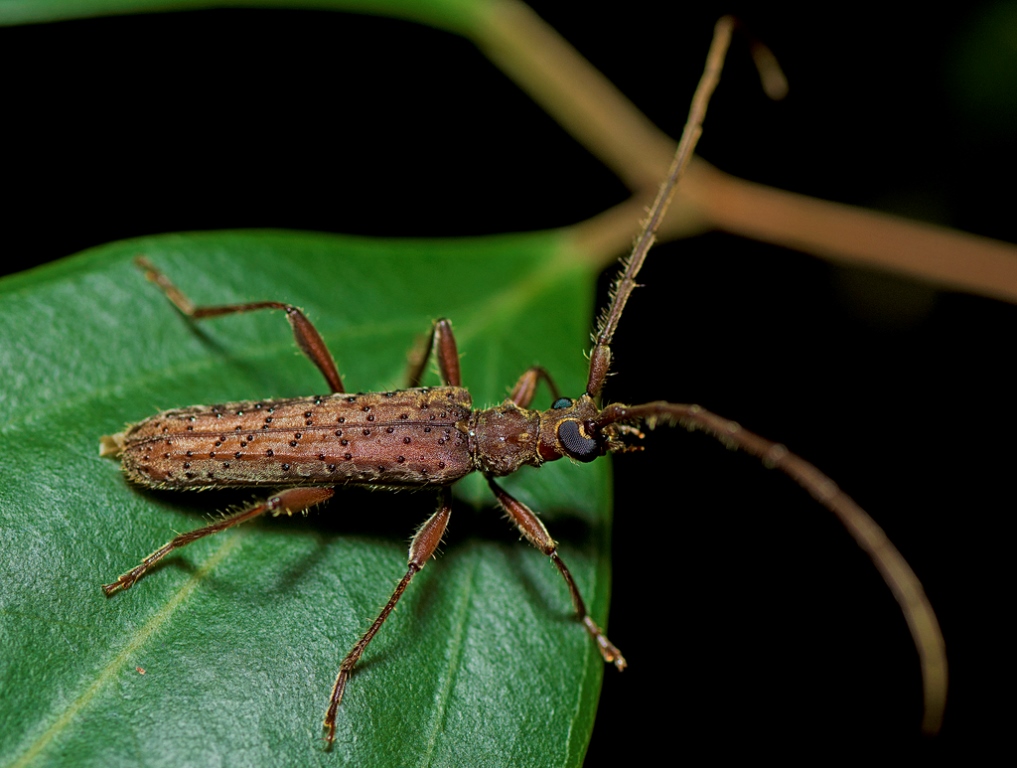 The other cerambycid was Uracanthus triangularis. This one I found in the kitchen back at the accommodation. I think it had attached itself to my camera bag when I was out in the field. 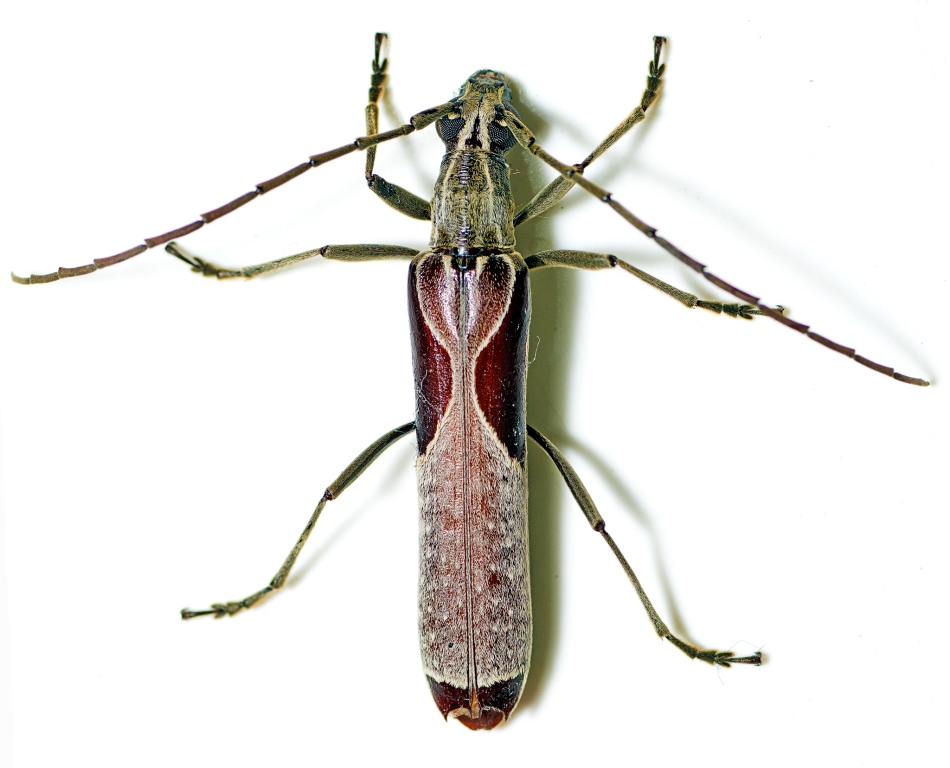