Every month the, Foundation for Individual Rights in Education (FIRE), an excellent organization, names one college’s speech code as standing out for being especially egregious. And this month it’s particularly bad, for the speech code singled out is that of the University of Wisconsin at Oshkosh (UWO), a public university. State universities, of course, must abide by the First Amendment because they’re considered organs of the government.

As always, when a college simultaneously tries to promote “mutual respect” and “free speech”, it gets into trouble. Here’s how the trouble emerges at the UWO website (click on screenshot)

The widest possible range of free inquiry and expression.

Contrast this with another “shared principle”:

An environment that is free of harassment and free of insulting and demeaning comments and epithets based on race, ethnicity, gender, religion, sexual orientation, age, disability, military status, socioeconomic status, family status or political views; and consistently enforces federal, state and university protections against discriminatory treatment yet is free from any official speech codes.

Now the issue of personal harassment and discrimination has already been settled by First Amendment law: you cannot persistently harass an individual in the workplace, nor create a threatening or unpleasant atmosphere for them.But you don’t violate the law by “insulting” someone, and that stricture is therefore unconstitutional.

And then, after averring that UWO has no “official speech code”, it proceeds to set out one, prohibiting “insulting and demeaning comments and epithets based on race, ethnicity, gender, religion, sexual orientation, age, disability.  . . and so on. Even “political views” are protected. Does that mean you can’t say that “Your Republican views suck big time”?

Further, university members are themselves enlisted in an effort to enforce the (nonexistent) speech code, and to “allow for a diversity of rights, opinions, and cultural characteristics”. It’s not even clear what that means.

But what this does mean is that UWO’s speech code palpably violates the Constitution, and I suspect it will have to be modified. Here’s a brief video FIRE made about the issues at play. What she says is absolutely accurate according to the law.

At the FIRE rating page, UWO gets an overall free speech rating of “red”, which is the worst .  Here’s what that means:

A “red light” institution has at least one policy that both clearly and substantially restricts freedom of speech. A “clear” restriction is one that unambiguously infringes on what is or should be protected expression. In other words, the threat to free speech at a red light institution is obvious on the face of the policy and does not depend on how the policy is applied.

And yet UWO says it’s adopted “the Chicago Statement of Free Speech.” Well, no, it hasn’t—not by a long shot.

If you click on the link below, you can quickly send your own message to UWO’s Chancellor asking the school to do the right thing. (To read more about their violation, go here.) You don’t even have to say anything, as there’s a built-in message to Chancellor, Andrew J. Leavitt:

I’m writing to you to discuss University of Wisconsin – Oshkosh’s speech codes. While a commitment to free speech is almost universally embraced in concept, many schools have official policies that restrict speech in practice. Although these policies may be written with the best of intentions, such restrictions violate students’ free speech rights and prevent higher education from achieving its full potential.

I’ve sent in mine, and you can send in yours in less than a minute. Strike a blow for freedom of speech. 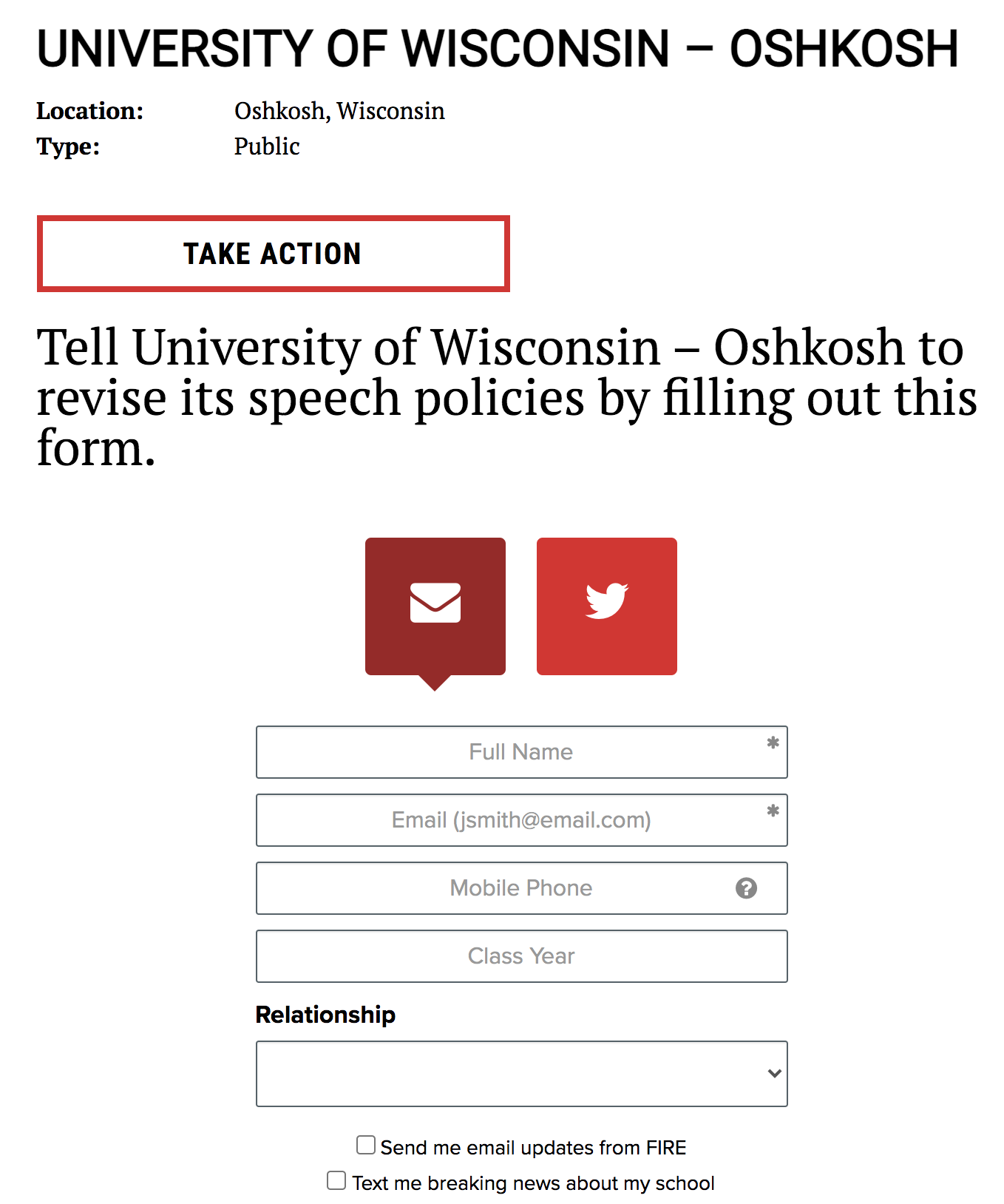 9 thoughts on “FIRE’s (bad) speech code of the month: The University of Wisconsin at Oshkosh”