Today we have a set from James Blilie, or rather a set of photos taken by his father in East Asia. James’s captions and introduction are indented, and you can enlarge the photos by clicking on them.

Here’s another batch of my Dad’s photos from Japan, for your consideration. You previously posted his photos here and here.

These are more street photos my Dad (James L. Blilie, 1923-2010) took in Japan in 1952 and 1953.  All are scans of his B&W negatives.  These are mainly shot on Kodak Super-XX film.  I spent many evenings in February and March this winter scanning in all his negatives from this tour of duty in Japan (several hundred).  (Thousands more to go from elsewhere!)

When he was not on duty, he wandered the areas around the air bases.  These photos are ones that he took around Tachikawa, Japan.

I have scanned his negatives, cropped the images, adjusted exposure and contrast, occasionally spotted out a distracting element, and spotted out the dust (some of my dust-spotting is sub-optimal).  My Dad’s equipment:  A Rolleiflex (twin-lens reflex camera, Schneider lenses), a Leica IIIf, and a compatible Canon III rangefinder.  I think these were among the first 35mm cameras to use interchangeable lenses and were the high-tech cameras of the time.  My copies of his cameras (the Rolleiflex is actually his original camera, he gave it to me in the 1980s) can be seen here.  (L to R:  Rolleiflex, Argus C-3, Leica iiif, Canon iii)

As my Dad noted:  “Japan has changed greatly since 1952-53.  These photographs represent an era that has passed, as I have been told by various people from Japan. I think this makes the pictures more interesting and valuable.”

Stevedores unloading bulky cargo at the docks in Tokyo: 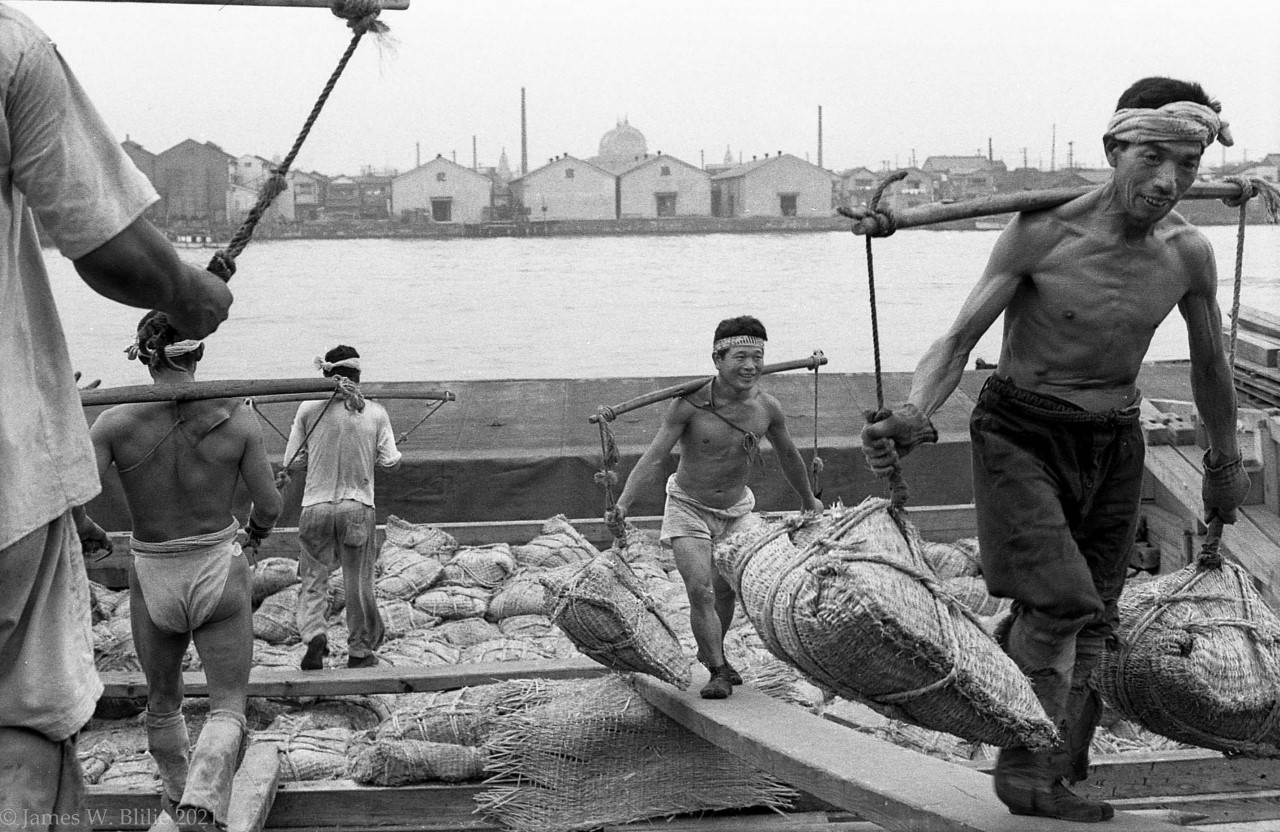 Woman at Nikko, following a trail lined by funeral markers: 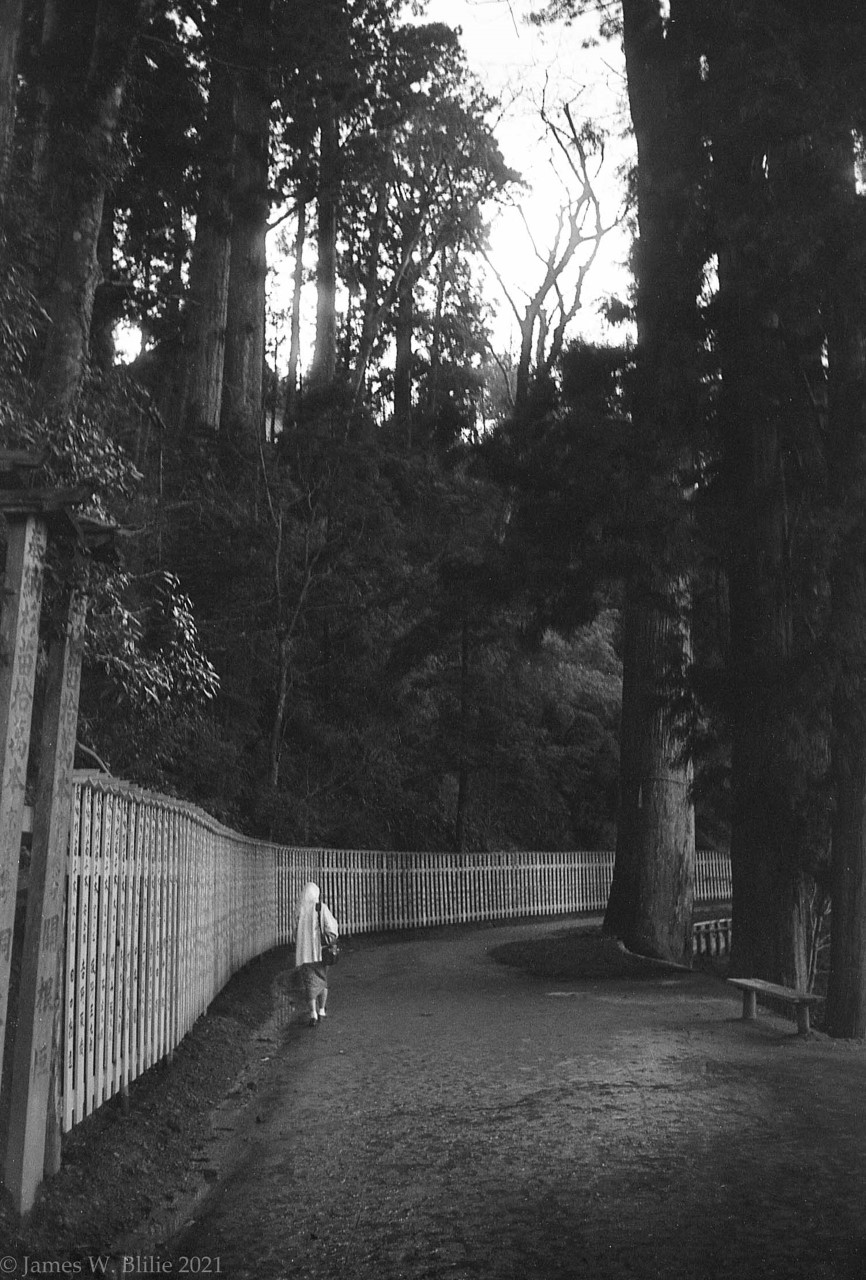 View from the window of a guest house where my Dad stayed in Kawaguchi-Ko.  I love the details of the shutters (if that’s what they are, maybe just decorative framing).  You can see my Dad reflected in the glass at the left. 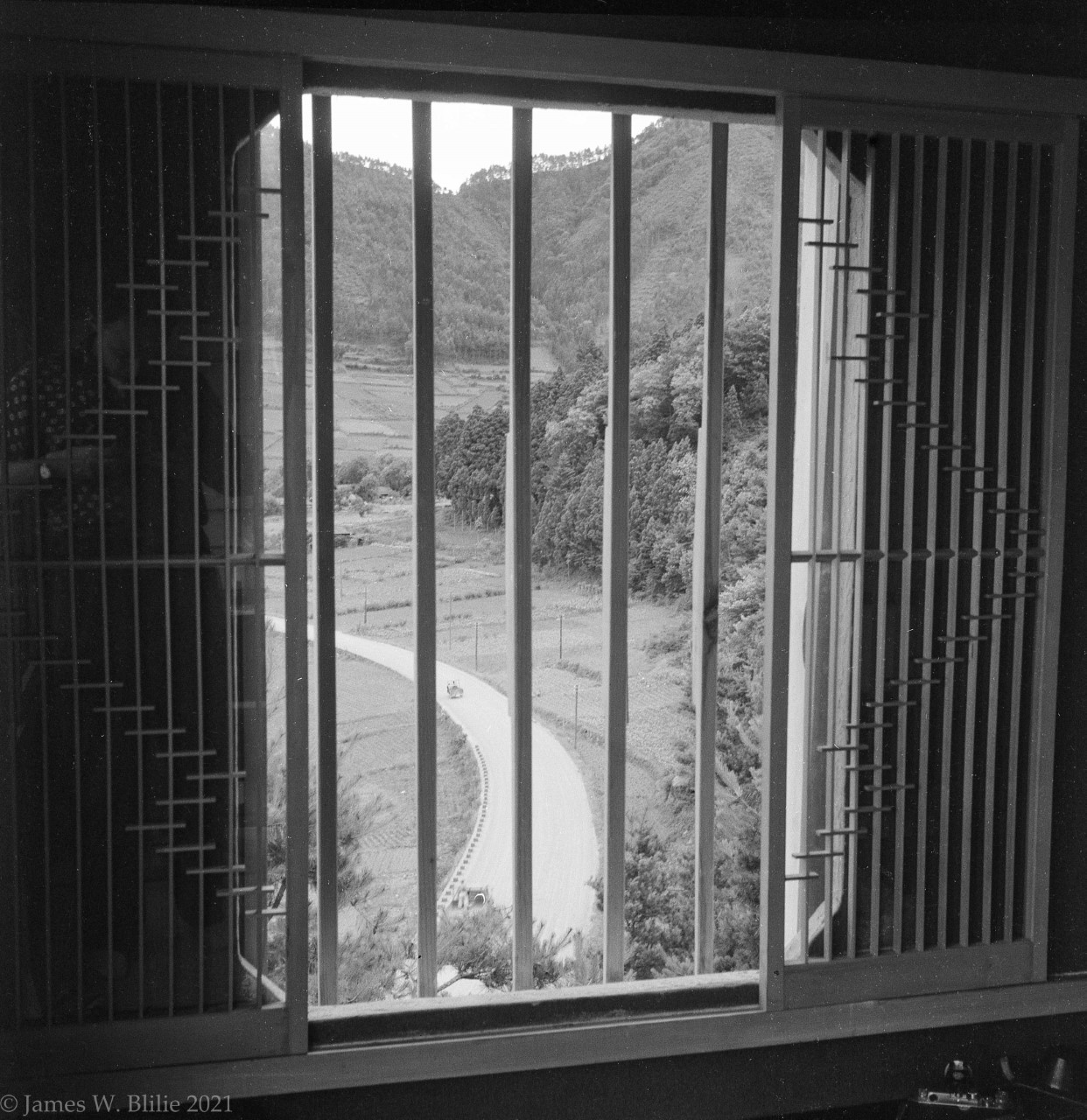 Portrait of a young man (I wish my Dad had written his name down!; I can find nothing) holding the wooden model C-54 airplane he was building for my Dad.  He built 3 airplane models for my Dad: the C-54, a C-97, and a B-24.  My Dad flew these types often (the B-24 during WWII).  We still have these models.  They are beautiful. 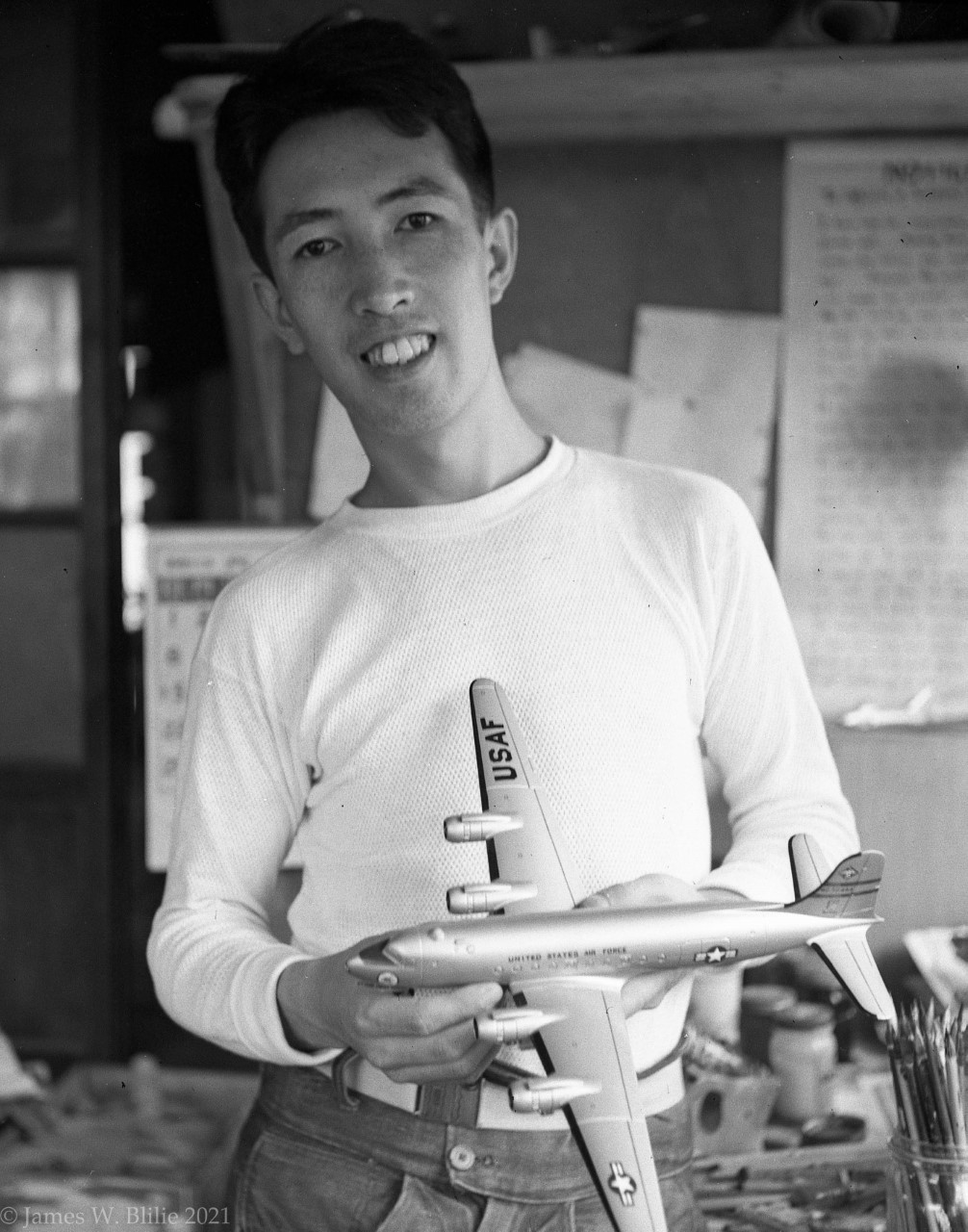 The remainder are shots of people from around Tachikawa City, Japan.  No further details are provided in his notes. 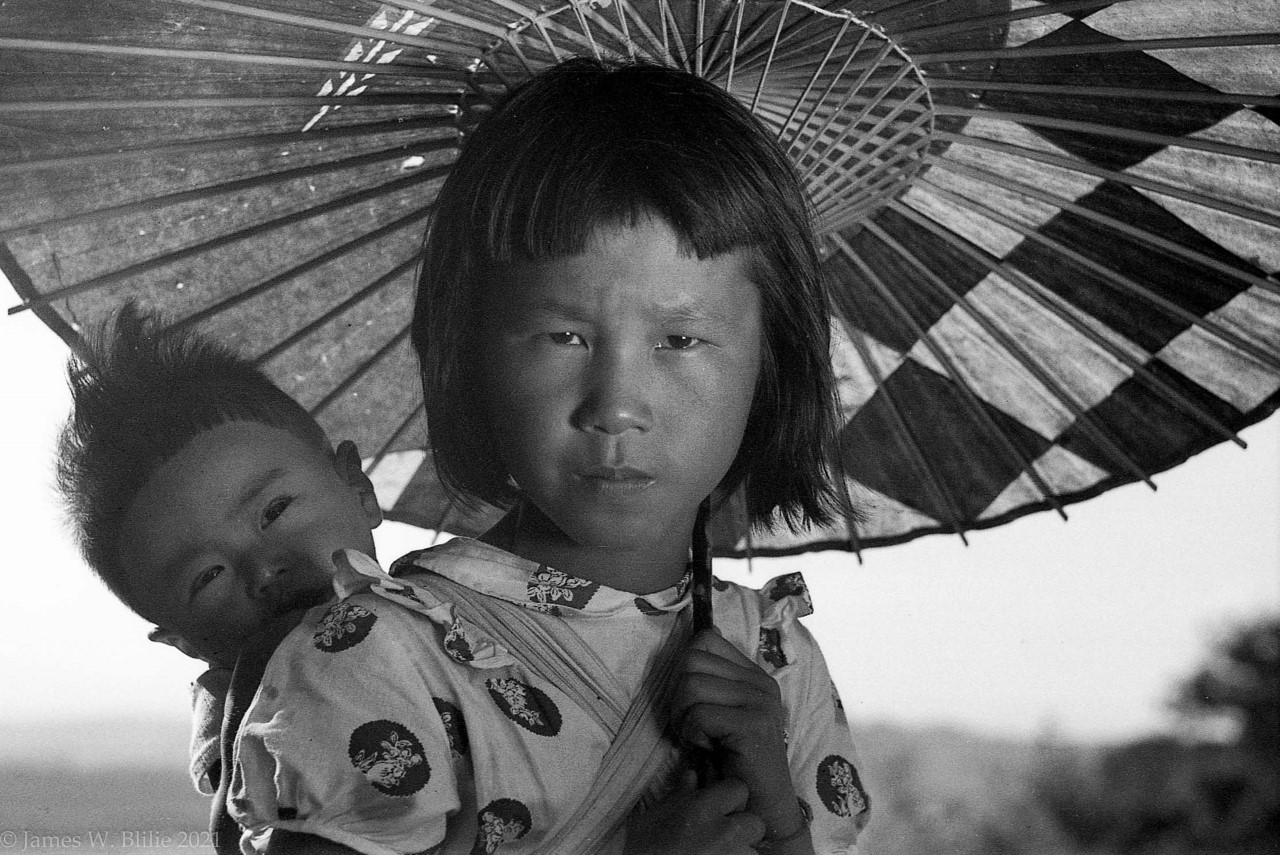 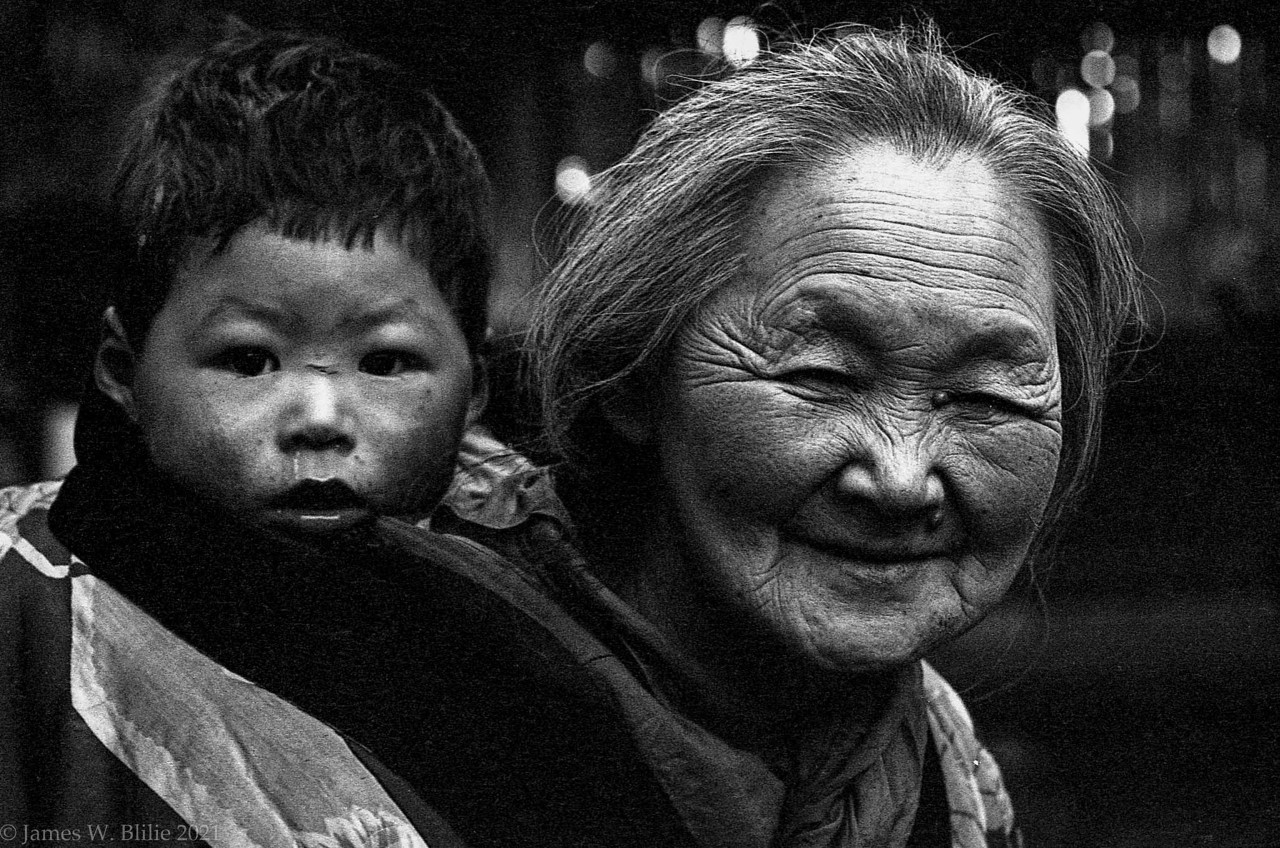 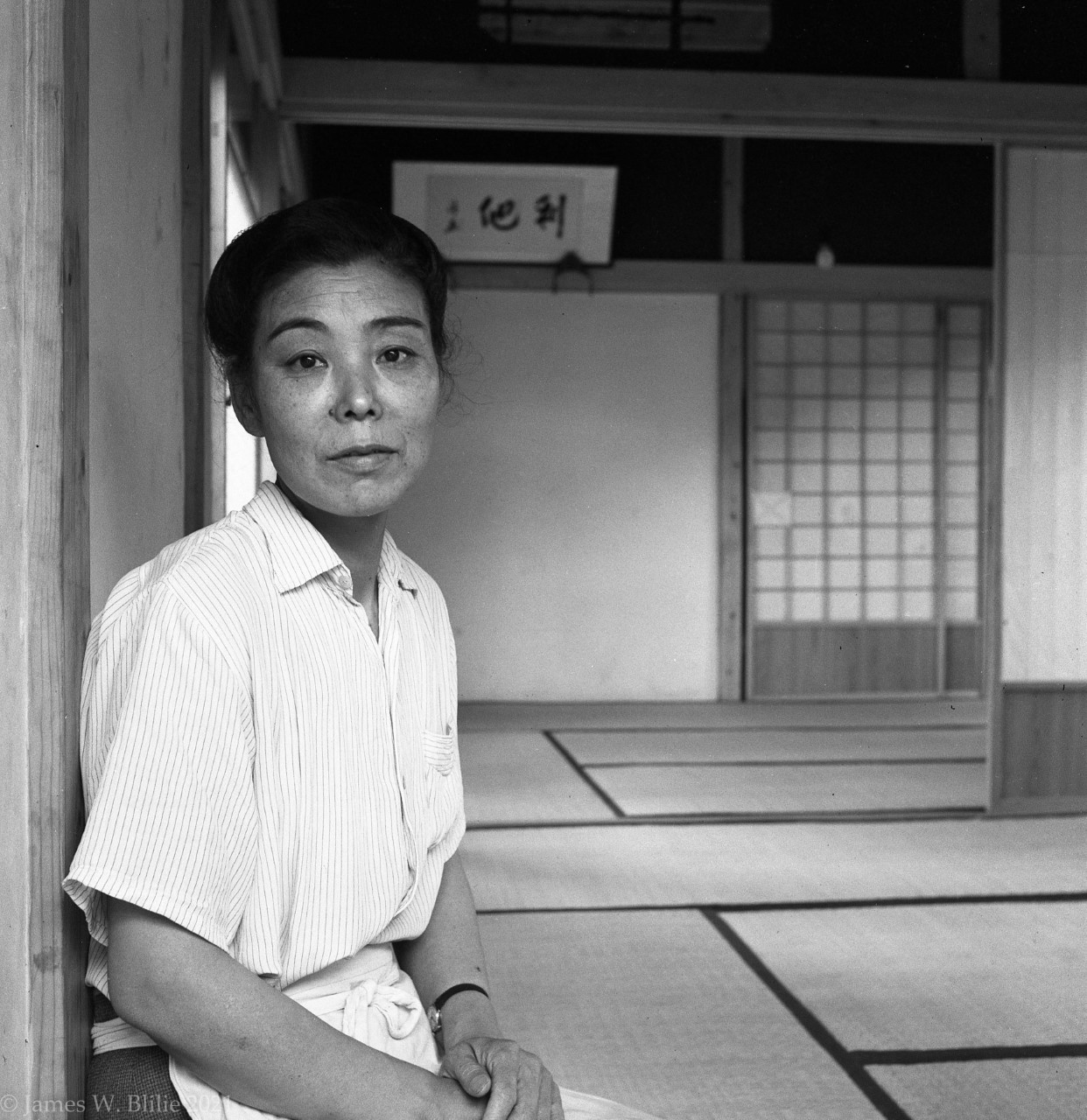 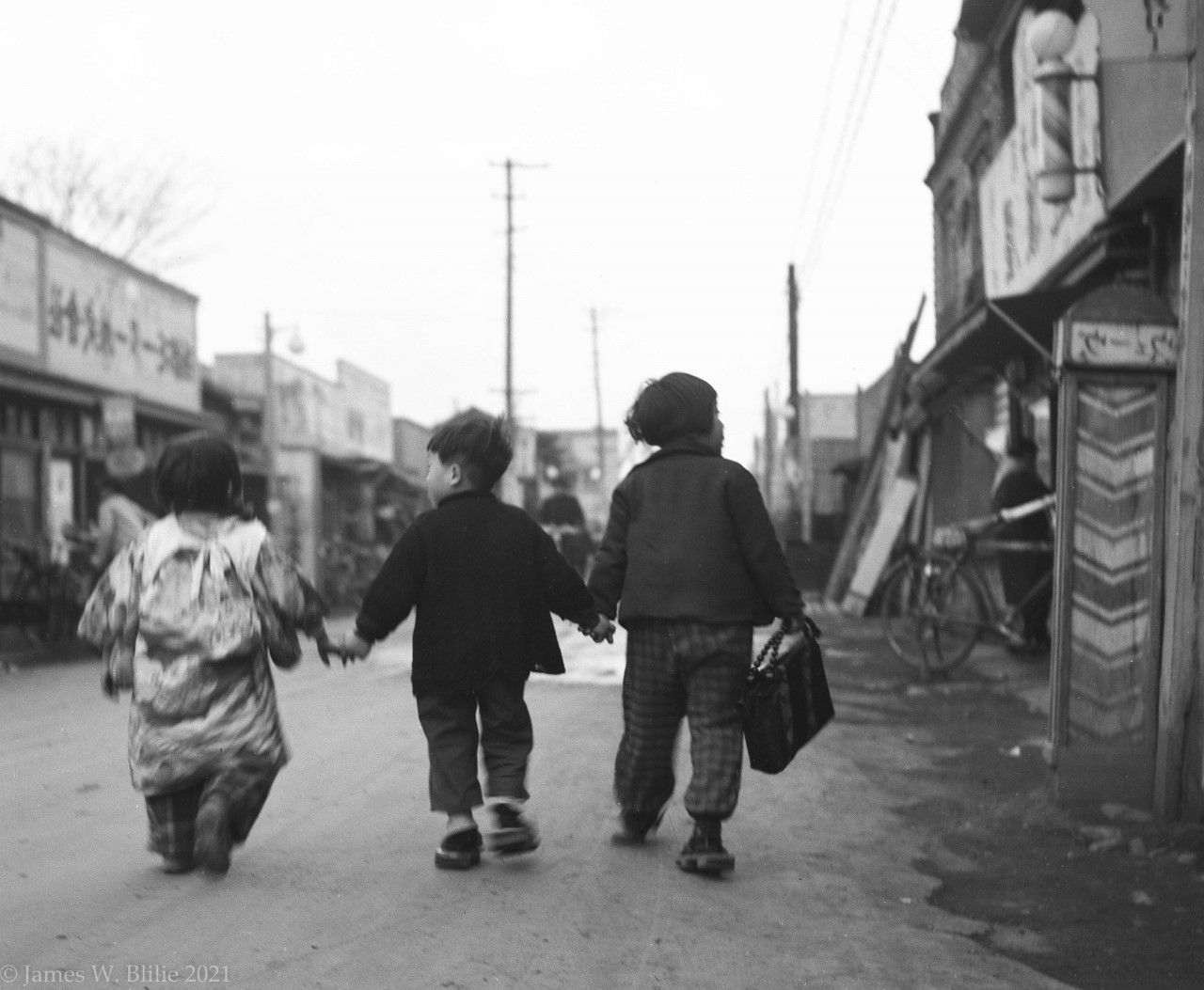 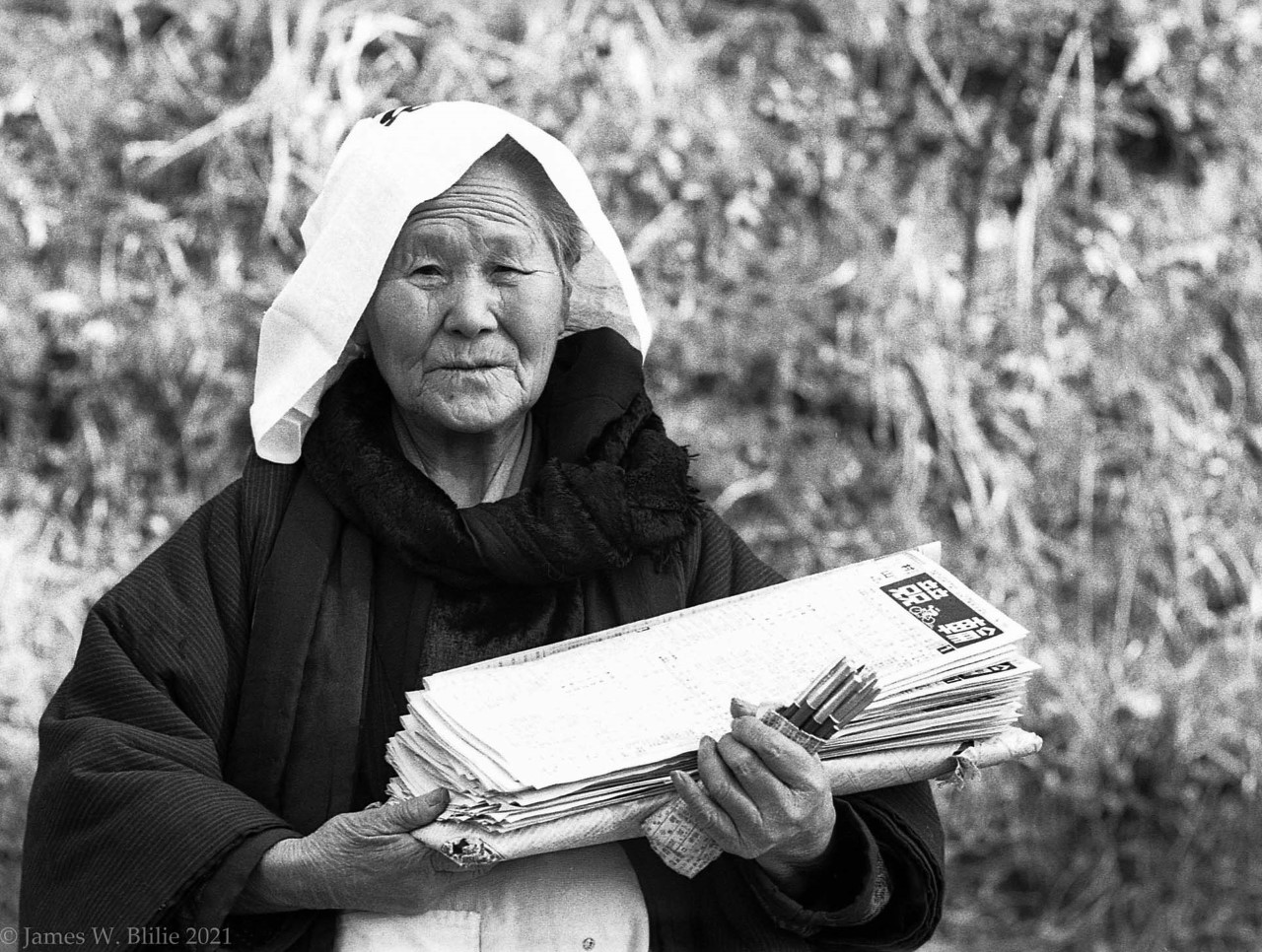 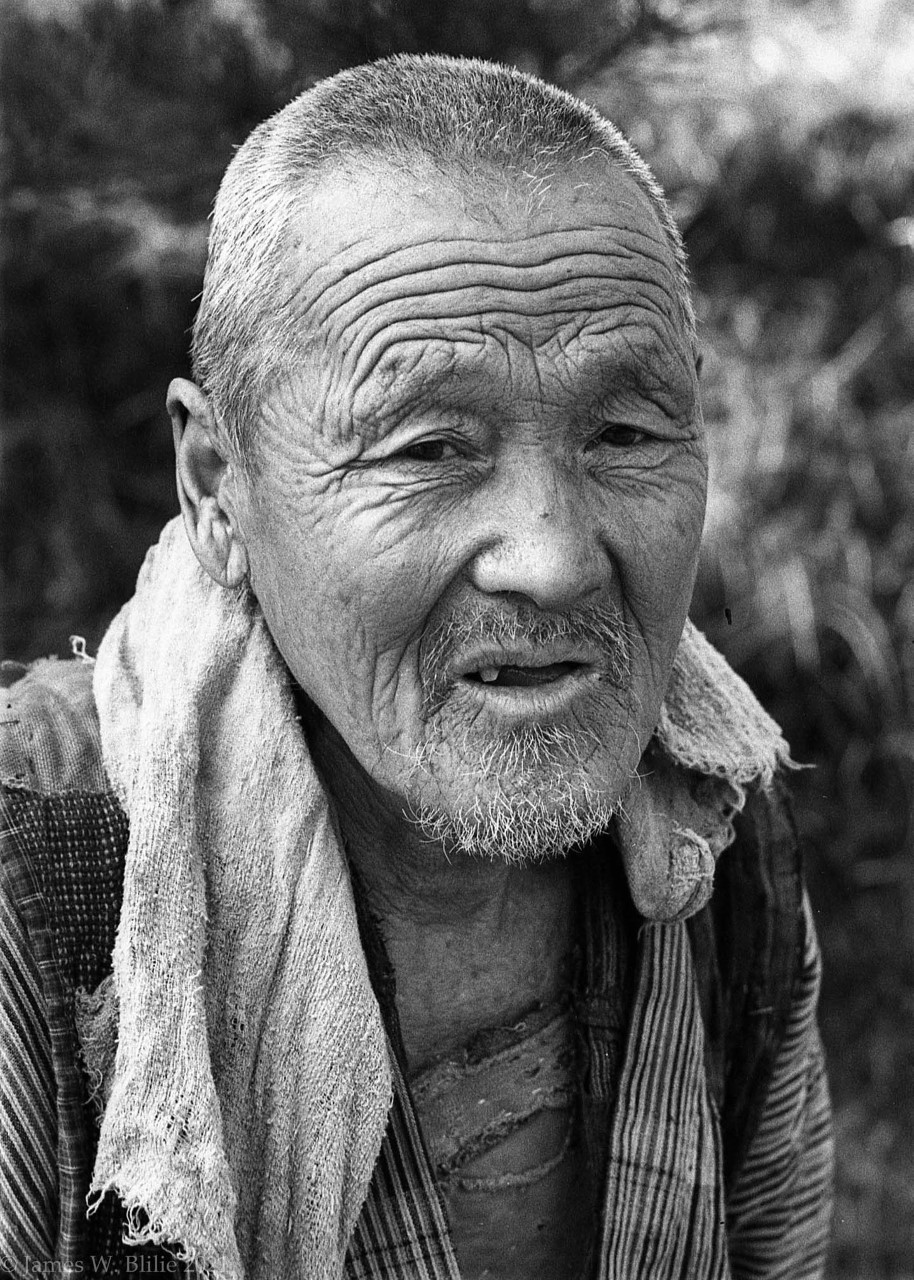 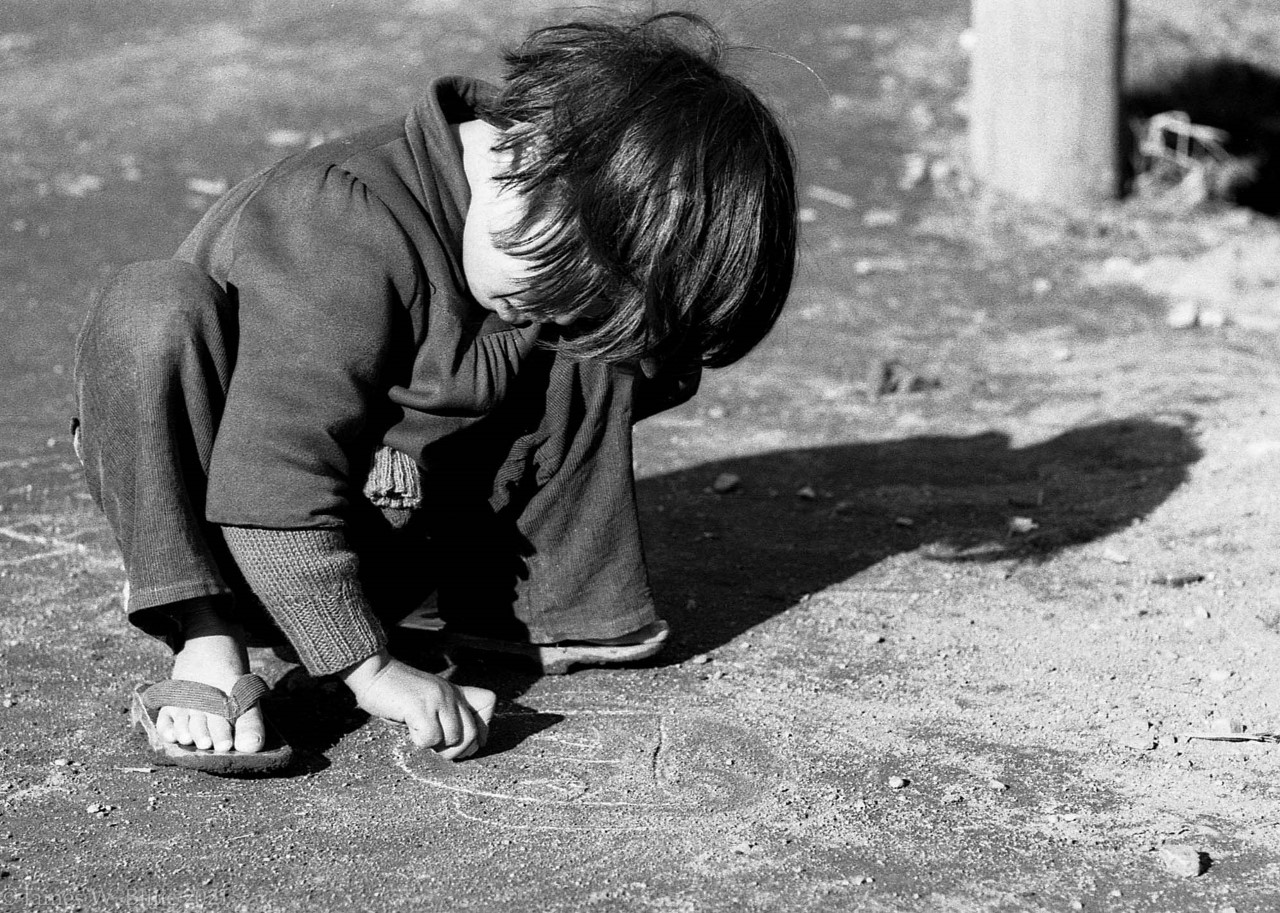 Finally, another photo of the guy who took these photos.  My Dad, at Taegu, Korea. 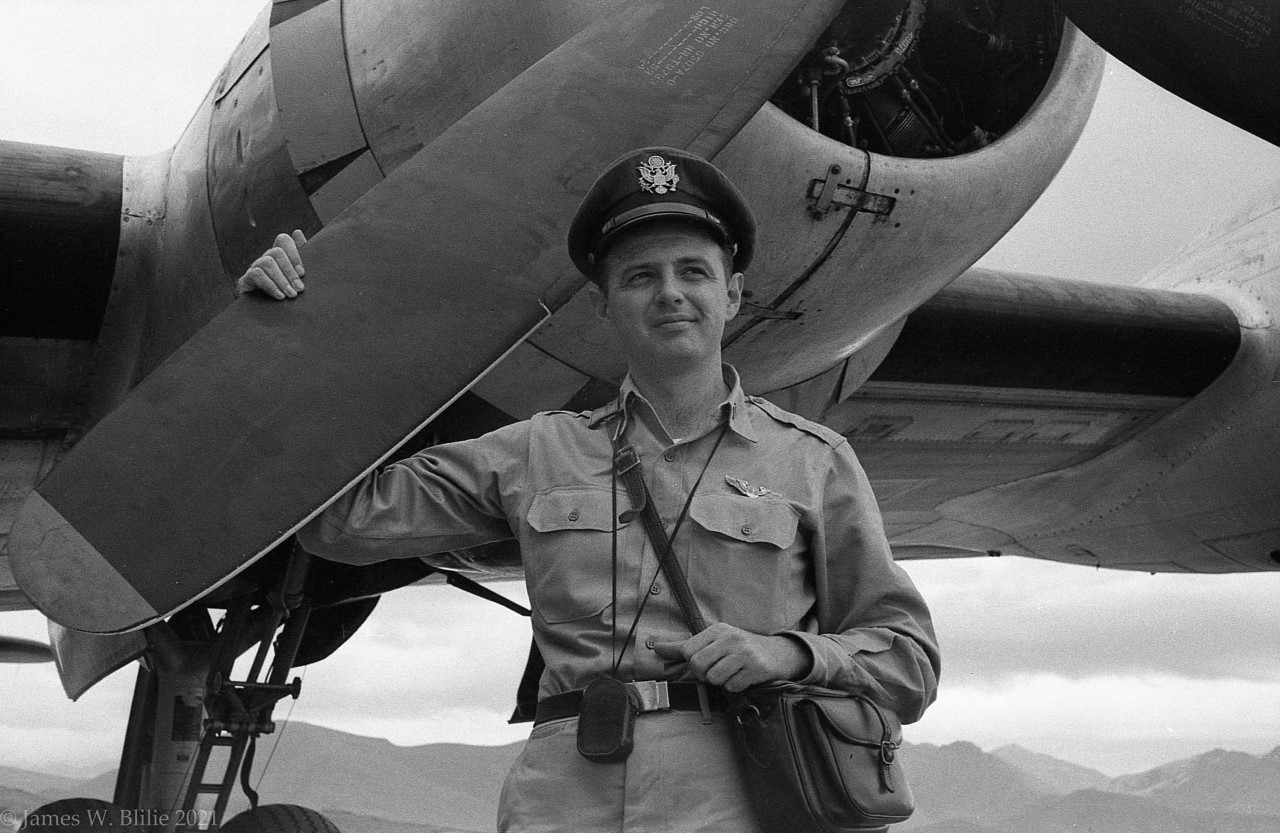