The Guardian has a “long read” piece by Arundhati Roy, a famous writer who lives in Delhi (you may have read her Booker-Prize-winning book The God of Small Things). If you have any interest in India (or let’s just say “humanity”), it is well worth reading.  Click on the screenshot to do so. 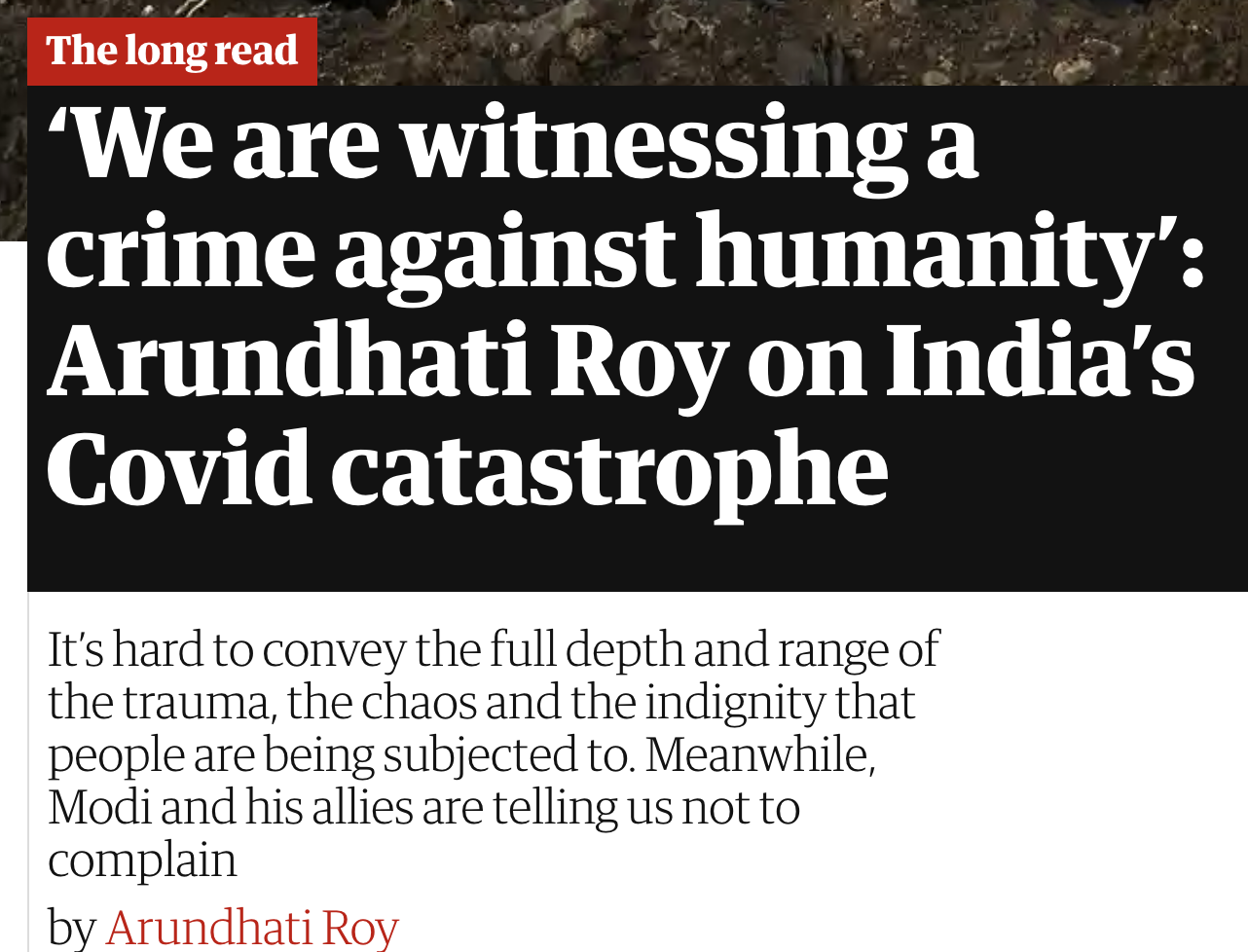 Roy deals with two connected topics, the pandemic that’s now ravaging India (the infection rate may soon rise to half a million per day), and the diffidence of the Modi government, which is corrupt, anti-Muslim and Hindu-centric, and absolutely without empathy. 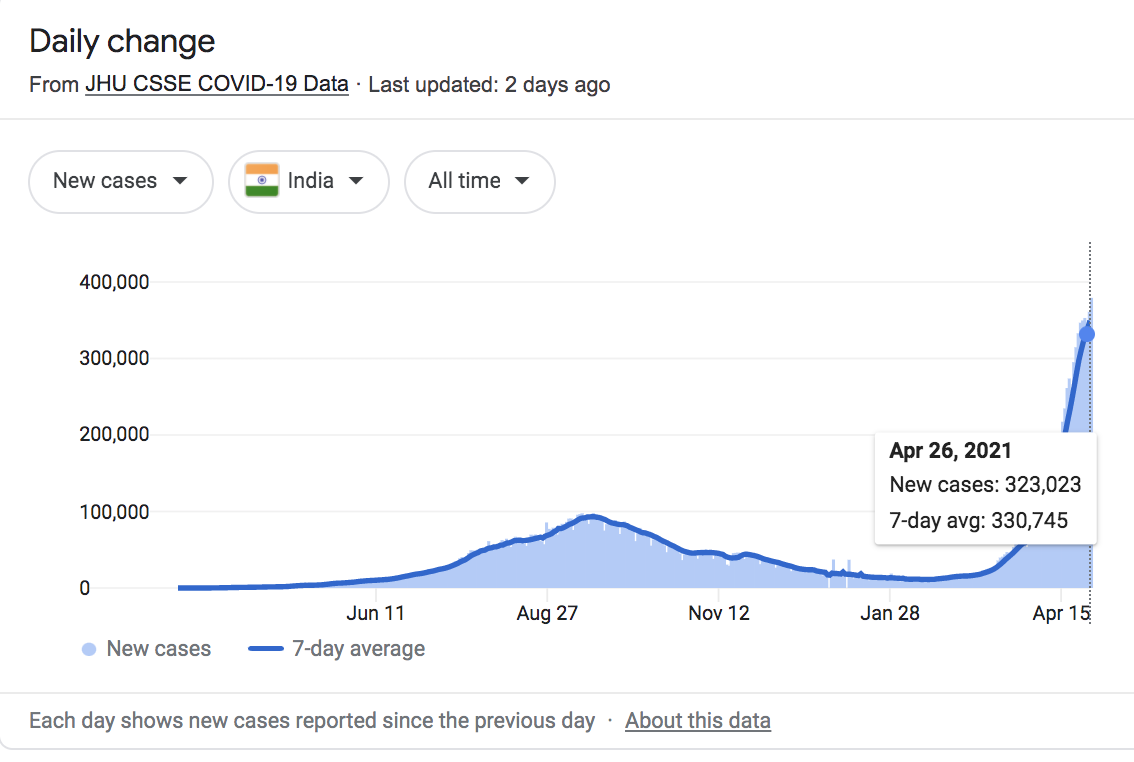 I’ve written about both these things before, but Roy, being “on the ground” in Delhi, has a horrific account of what it’s like to live in the center of the maelstrom. She notes that deaths and infections are likely to be grossly underreported given the largely rural population of India, and that 78% of healthcare in urban areas and 71% in rural areas is handled by the private sector, which means that the poor are simply unable to afford healthcare, much less vaccinations or oxygen. The black market that has sprung up around these things, while typical of India in a desperate situation, is further hitting the poor, and, as you may have seen from photographs, the poor are being refused hospital admission (or asked to bring their own oxygen tanks), or are left to die on the sidewalks. There are so many bodies that there’s a shortage of wood to cremate them.

The Modi government under the Bharatiya Janata Party (BJP) isn’t positioned to help, either materially or psychologically. The fact is that Narendra Modi is basically an evil man—the kind of man who encourages or allows Hindus to kill Muslims. I consider him even worse than Trump, since he doesn’t even pretend to care about the plight that’s destroying India. Yet he’s still too popular to be deposed.  And while earlier he assured the world that India, the world’s second most populous country, had the virus under control, that proved to be untrue.  It’s clear that, like me, Roy is a bitter opponent of Modi and his minions, but you can read about that in the article. I’ll give just one quote:

As this epic catastrophe plays out on our Modi-aligned Indian television channels, you’ll notice how they all speak in one tutored voice. The “system” has collapsed, they say, again and again. The virus has overwhelmed India’s health care “system”.

The system has not collapsed. The “system” barely existed. The government – this one, as well as the Congress government that preceded it – deliberately dismantled what little medical infrastructure there was. This is what happens when a pandemic hits a country with an almost nonexistent public healthcare system. India spends about 1.25% of its gross domestic product on health, far lower than most countries in the world, even the poorest ones. Even that figure is thought to be inflated, because things that are important but do not strictly qualify as healthcare have been slipped into it. So the real figure is estimated to be more like 0.34%. The tragedy is that in this devastatingly poor country, as a 2016 Lancet study shows, 78% of the healthcare in urban areas and 71% in rural areas is now handled by the private sector. The resources that remain in the public sector are systematically siphoned into the private sector by a nexus of corrupt administrators and medical practitioners, corrupt referrals and insurance rackets.

Healthcare is a fundamental right. The private sector will not cater to starving, sick, dying people who don’t have money. This massive privatisation of India’s healthcare is a crime.

The system hasn’t collapsed. The government has failed. Perhaps “failed” is an inaccurate word, because what we are witnessing is not criminal negligence, but an outright crime against humanity. Virologists predict that the number of cases in India will grow exponentially to more than 500,000 a day. They predict the death of many hundreds of thousands in the coming months, perhaps more. My friends and I have agreed to call each other every day just to mark ourselves present, like roll call in our school classrooms. We speak to those we love in tears, and with trepidation, not knowing if we will ever see each other again. We write, we work, not knowing if we will live to finish what we started. Not knowing what horror and humiliation awaits us. The indignity of it all. That is what breaks us. 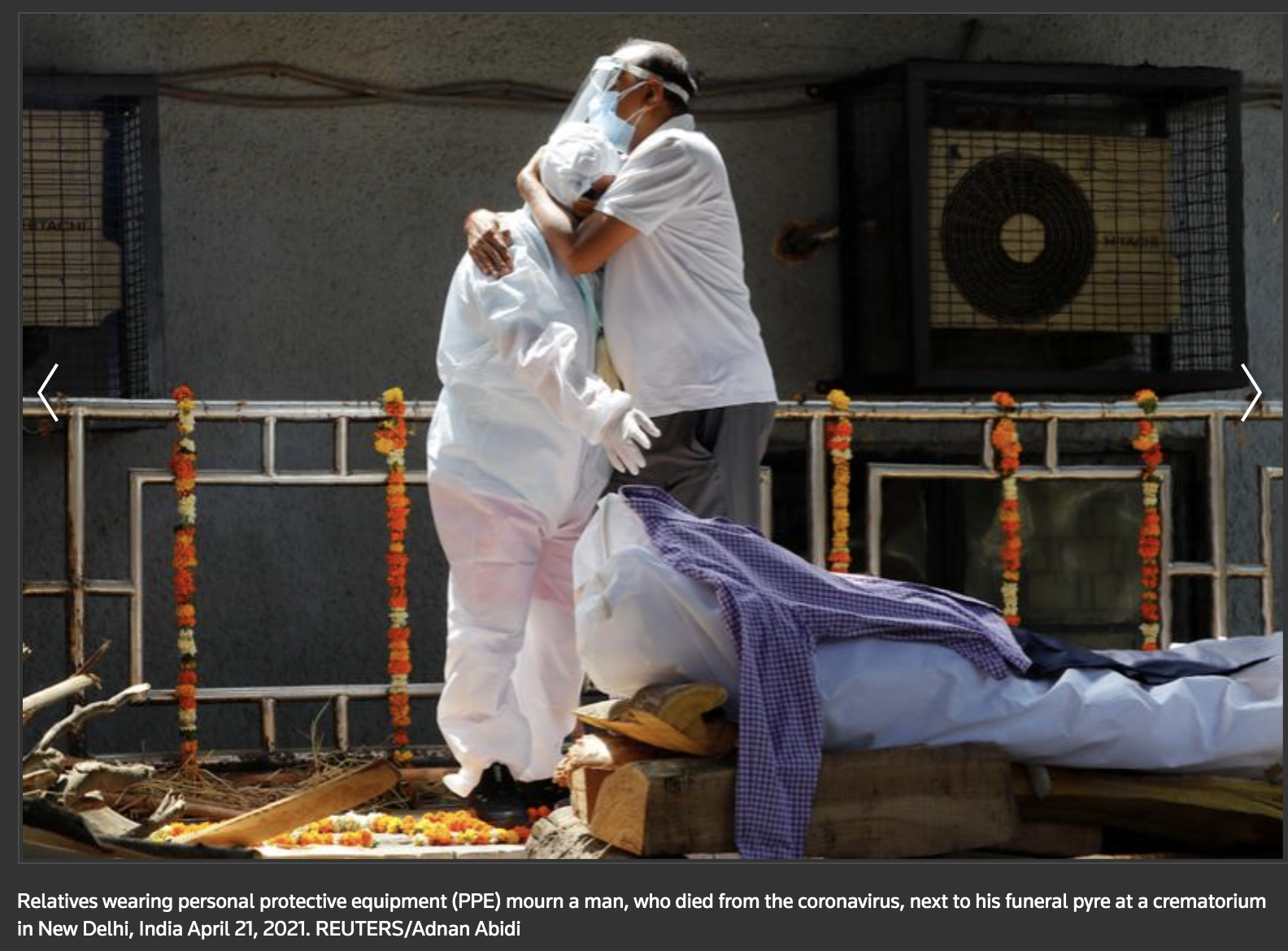 The crisis-generating machine that we call our government is incapable of leading us out of this disaster. Not least because one man makes all the decisions in this government, and that man is dangerous – and not very bright. This virus is an international problem. To deal with it, decision-making, at least on the control and administration of the pandemic, will need to pass into the hands of some sort of non-partisan body consisting of members of the ruling party, members of the opposition, and health and public policy experts.

As for Modi, is resigning from your crimes a feasible proposition? Perhaps he could just take a break from them – a break from all his hard work. There’s that $564m Boeing 777, Air India One, customised for VVIP travel – for him, actually – that’s been sitting idle on the runway for a while now. He and his men could just leave. The rest of us will do all we can to clean up their mess.

No, India cannot be isolated. We need help.

And here’s how to help: consult these articles, which give many links about how and where to give:

37 thoughts on “The hell that India has become”