In his latest piece on Substack (click on screenshot, though you may have to be a subscriber), Andrew Sullivan, who is HIV positive, compares condom use by gay men to prevent HIV viral transmission with masks worn by people to prevent transmission of a different virus: Covid 19. 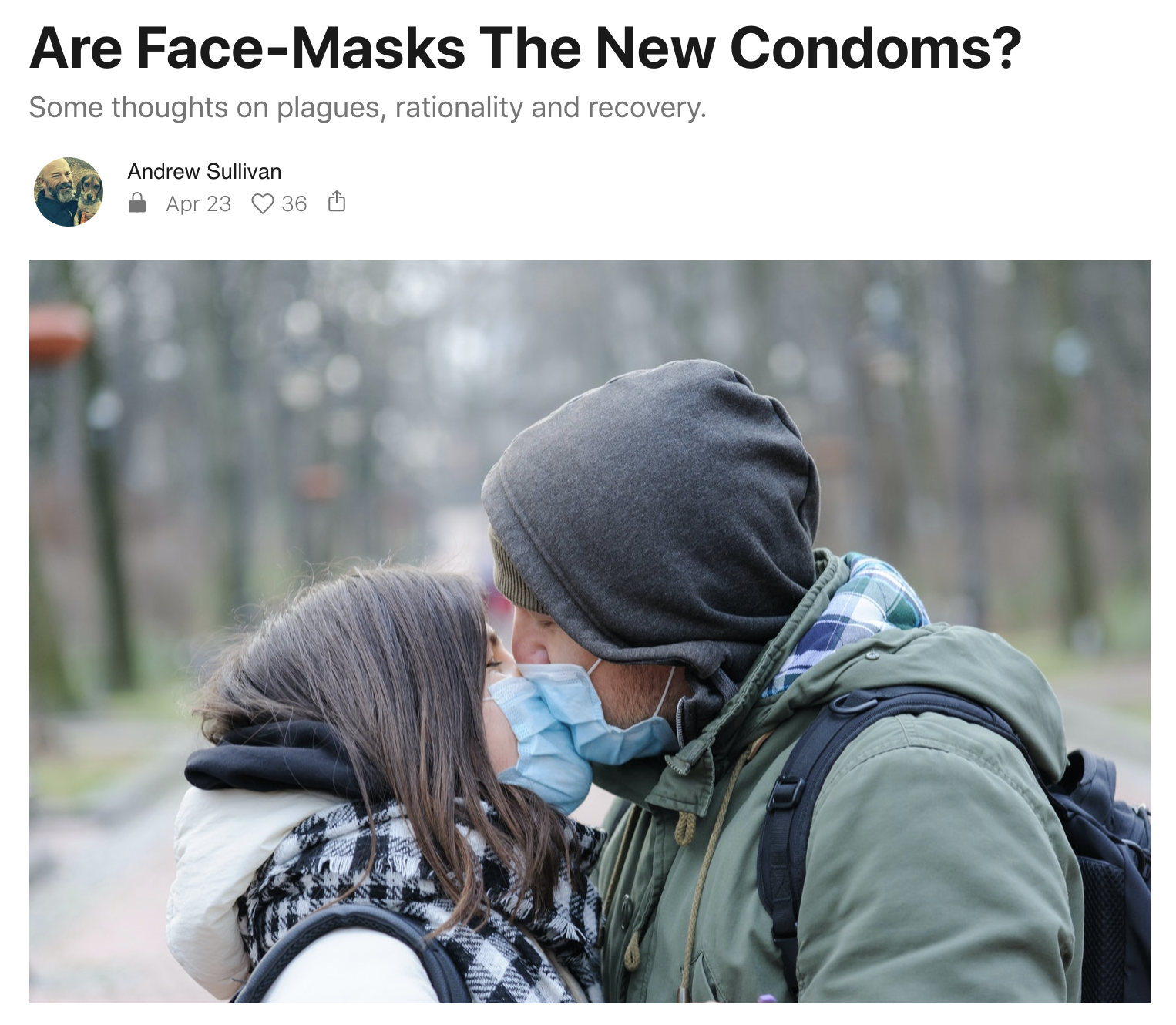 Sullivan, who’s been taking the HIV drug cocktail for years, and says his viral load is undetectable, has also been vaccinated against Covid.  In his view, mask-wearing around similarly vaccinated people is now optional. He maintains that the chance of getting the virus while wearing a mask, or of spreading it to others, is virtually nil. And this, he says, is also true for HIV: if your viral load is sufficiently low because you’re taking anti-retroviral drugs, condom-less sex with a similarly low-HIV partner taking the cocktail is virtually risk free. Therefore, just as gay men feel that they can have sex “bareback”, as Sullivan calls it, so we should be able to go maskless around people if both we and they are vaccinated.

In this way, gay men became as attached to condoms during AIDS as many of us have to masks during Covid. They remained a reflexive totem of responsibility, a sign of continued vigilance, a virtue-signal to oneself and your partner — long after they made no sense as a way to avoid HIV if you and your partner were already being treated. From those of us with zero viral loads at the start to those today taking the newer “prep” pill that prevents HIV infection, bit by bit, the condom rule has disappeared.

And yet not using a condom for sex — though the overwhelming norm for humans in history — felt weird and scary for a while in the late 1990s, like going into a restaurant without a mask now. Walking my dog in the park mask-free last weekend, I felt the same jitters as when I first stopped using condoms. I felt naked, and a bit daring. But I really had nothing to worry about in either case. I almost certainly couldn’t transmit either HIV or Covid and if I ever somehow got Covid again, it wouldn’t kill me. Just as there is nothing to fear if a few fully vaccinated friends come over for a cozy smoke sesh and chill in 2021, there was nothing rationally to fear in 1997 if two men, fully treated for HIV, had sex without a condom. The moral panic long outlasted its viral reason.

. . .we are in a similar phase in which reasonable people are being irrationally demonized for going back to normal and going mask-free. It makes no sense, but the truth is we get attached to rituals of safety, even after they have become redundant. Look at airport TSA screening, twenty years after 9/11. We so identify with safety protocols that it can feel dangerous simply to follow reason when circumstances change. The fear of Covid somehow gets internalized and perpetuated, just as HIV was. Even today, for example, a diagnosis of HIV feels far more terrifying than, say, diabetes. But diabetes is much, much more problematic now than AIDS, over a lifetime. Covid now seems much scarier than the flu. But if you’ve been vaccinated, that’s exactly how we should think of it. Nasty, but not fatal. So live!

It is true that Covid is not over; that we should not totally relax; that many who refuse vaccines could be a problem; that mutations matter. For what it’s worth I have nothing personal against masks. I wore them from early February of last year and was punctilious about them. But the situation has changed, and as more and more get vaccinated, and the human “herd” of the vaccinated grows larger, the odds of infection will decline. Bottom line: this viral motherfucker is on the ropes and we do not need to be in a state of permanent terror.

Sullivan hastens to add that he’ll probably continue to wear a mask on planes and trains forever, and he has no problem with bars and restaurants demanding proof of vaccination for entry. But he adds that the argument for wearing masks to be a “role model” also has a cost: “if people see no-one being liberated by the vaccine, they’ll be less likely to get one. And if leaving masks behind is the fruit of vaccination, the more people in the party the more will want to join.”

But is not wearing a mask easily interpreted as a sign of being “liberated by the vaccine”? I don’t think so.  Most maskless people, I suspect, are simply those who object to masks and have not been vaccinated. Remember, only half of Americans have now received at least one shot.

So get vaccinated. Then use reason. The point is to get back to normal life, not to perpetuate the damaging patterns of plague life. So take off your masks, if you want. Plan parties for vaccinated friends. Get your vacation plans ready. And stop the constant judging and moralizing of people with masks and those without. Summer is coming. Let’s celebrate it.

But there’s a difference between masks and condoms that Sullivan doesn’t mention—or at least a possible difference. We still do not know if you can infect someone else if you’ve been vaccinated against Covid—as an asymptomatic carrier. We already know that you can get infected if you’ve been vaccinated; after all, the protection afforded by even the most efficacious vaccines is 95%, which means that there’s still a chance you could get Covid if you’ve had the jab(s). Granted, it’s a much reduced chance, and the vaccinations reduce the chance to about zero of your being hospitalized or dying, but getting infected still means that you might be able to spread the virus even if you’ve been vaccinated.

The only question I have is whether, if you get infected post-vaccination, you would be an asymptomatic carrier, not knowing you could carry the virus. And we also don’t know whether, even if you’re an asymptomatic carrier, you could carry enough virus to infect others. If all this is in fact the case, then there could be a large number of vaccinated people who should wear masks because they could spread the virus. If they were asymptomatic, we wouldn’t know who they were unless they got a Covid test, and even then you could get infected after the test.

Here’s the difference between condoms with HIV and masks with a vaccination. Those you could infect if you’re vaccinated are not your sex partners who are aware of any risks. They are clueless people you come in contact with. That’s not the same as having HIV, possessing a very low virus titer, and not using condoms when having sex with a similar person. In that case the two informed adults make a judgment. For someone vaccinated against Covid who doesn’t wear a mask, that person alone makes the judgment, putting other non-consenting people at risk.

Surprisingly, though, we still don’t know if vaccinated people can be asymptomatic carriers. According to NBC News Boston (my emphasis):

Dr. Kimi Kobayashi, the chief quality officer at UMass Memorial, said it is important for everyone to wait the full two weeks after the second shot for the body to build up immunity. However, he also said everyone needs to keep taking precautions until more of the population is vaccinated.

“We’re in a complicated stage where some are vaccinated and some aren’t,” Kobayashi said. “It is really important to remember – even as vaccines become available – it doesn’t mean everyone is vaccinated. We still have to wait for a large number of population to be vaccinated.”

Kobayashi noted that experts still don’t know if someone who is vaccinated can transmit the virus or not.

Now how this translates into the big question—should you still wear a mask if vaccinated?—is more or less a judgment call. Personally, I still wear a mask when I’m around others. It’s still required at my university, in planes and on public transportation, and in stores in Chicago, so there’s no dilemma. The only time I don’t wear a mask is when I’m at home, in my office when nobody’s around, and when I’m exercising outside and far from other people. In these cases there is no chance that I could infect anybody.

Now I may be kvetching for no reason, as Sullivan doesn’t say that we should go maskless around people who may be unvaccinated. And he does say “use reason”. But he also says that we should “get back to normal life”.

Until we know whether vaccinated people can be asymptomatic carriers, I don’t see a reason to stop wearing masks. I suspect that the answer will be “no”, but I’ll wait for the science before I start debating whether I discard my mask—when it’s legal to do so.

And remember that in some places in East Asia, people always wear masks in public. There’s an argument for this, as it protects you against various respiratory ailments. I notice that since the pandemic hit over a year ago, I have had neither a cold nor the flu. I’m sure that my compulsive hand-washing and mask-wearing (and my flu shots) explain the lack of illness. But I’m not sure that I want to continue wearing a mask when the danger of Covid has largely passed. I am going to keep washing my hands more often, and I’ve learned how to do that properly.

What is your feeling on mask wearing? When will you stop, if ever?