“CRT”, of course, is Critical Race Theory, which rests on a number of assumptions and assertions that are sometimes dubious (e.g., inequality of representation purely reflects current racism). When Biden got elected, I worried—and, I think, predicted—that he would be too woke for my taste. (I may not remember correctly.) And, sure enough, that’s exactly what is happening on a number of fronts. I hasten to add that Biden and Harris are infinitely better than Trump and Pence.  I support much of what he’s done, and I don’t much care if Biden hasn’t become the “unifier of Congress” that he promised. Given Republican intransigence, that would be impossible.

But the Biden administration isn’t perfect, and I’ll criticize it when I see fit—like now.

This article appeared in the conservative venue The National Review, and I was sent it by reader Bill who suspected, correctly, that it is “not one of my preferred news sources.” Indeed! But who else would publish something like this: a notice that the Biden administration has set out a proposal to get schools to teach Critical Race Theory in one of its more objectionable forms? Click on the screenshot to read the National Review piece, but be warned that a lot of it is right-wing kvetching:

The upshot of the report, leaving aside the kvetching about CRT and the criticism of Biden, is that his Department of Education has just put out a proposal for grants to secondary schools in the area of American History and Civics Education. You can see the pdf of the government proposal here, or click on the screenshot below: 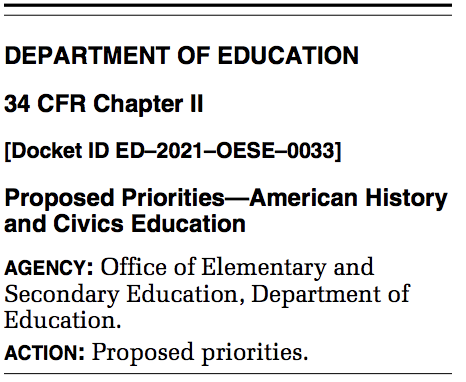 The aims of these proposals are these, set out in the government document:

The purpose of the National Activities program is to promote new and existing evidence-based strategies to encourage innovative American history, civics and government, and geography instruction, learning strategies, and professional development activities and programs for teachers, principals, or other school leaders, particularly such instruction, strategies, activities, and programs that benefit low-income students and underserved populations.

Note the “evidence-based” slant. I have no quarrel with the aims, nor with the second area of funding that I won’t discuss (“Promoting Information Literacy Skills”). But the first part, “Projects That Incorporate Racially, Ethnically, Culturally, and Linguistically Diverse Perspectives into Teaching and Learning”, is objectionable and invidious.  I’ll let you read for yourself from these screenshots:

Note the exemplar module: the New York Times‘s “1619 Project”, which has been severely criticized for both ideological zealotry and historical inaccuracy. But this is exactly what the New York Times wanted—not journal, but an injection of the paper’s own ideology as propaganda in the public schools. Notice also the approbation for Kendi’s dubious claim that any racial inequities in any area, say in evolutionary biology, are the result of “racist policies.”  While that may be true of policies in the past, Kendi means it to reflect current racism. And he’s not always right about that; but this is what our kids are going to learn.

Again, I emphasize that some redress is needed in teaching American history for the decades of teaching that more or less erased the fates of oppressed minorities in this country. I have no problem with such redress. I do have a problem with redress via the methods of The 1619 Project and the views of Ibram X. Kendi.

When a school or school system writes a proposal to be funded under this aegis, this is what it must do: 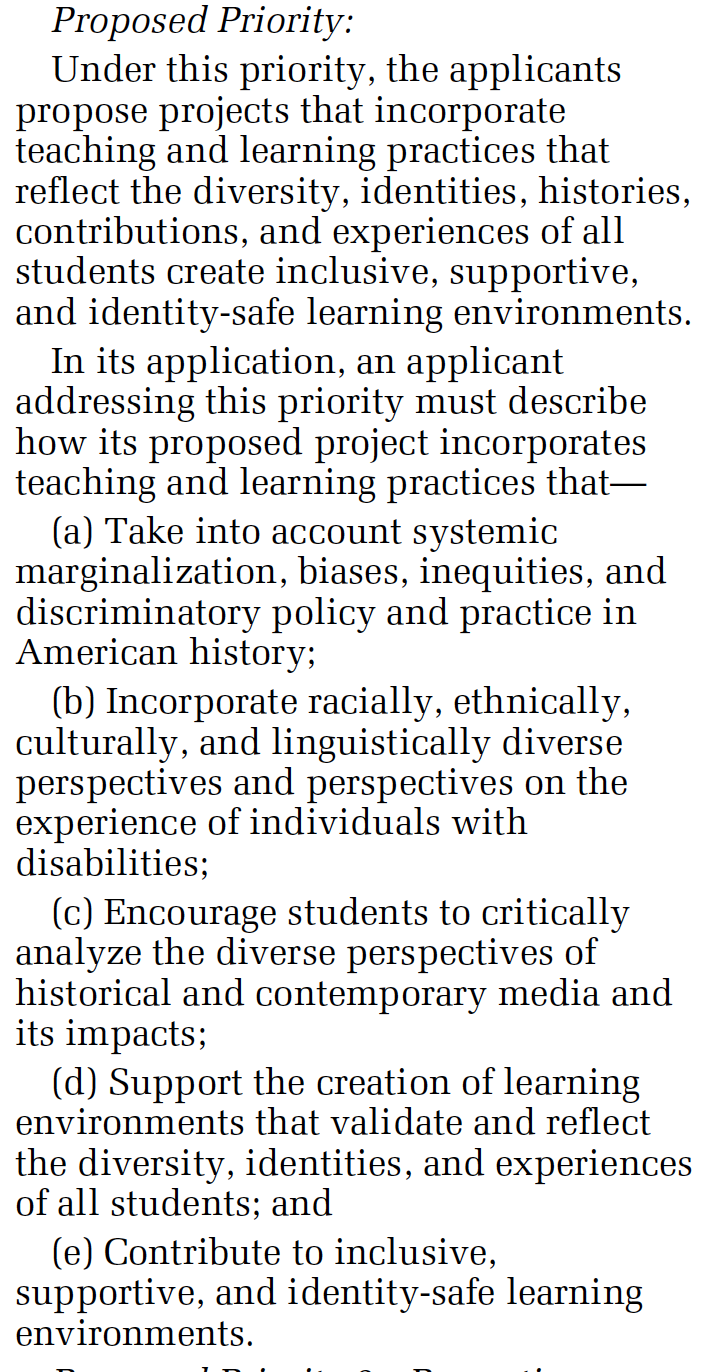 I don’t have to dwell on the problem with this program: its divisiveness, its one-sidedness, its questionable claims about systemic marginalization (that is, marginalization built into form structures of governments, schools, and other organizations), and the laughable bit about “critical analysis”, for you know that no criticism of the program will be tolerated once it’s in the classroom. That is, this is an ideology to be foisted on students, and perhaps a violation of the First Amendment.

Now I don’t agree with state laws that have been enacted (Trump also ordered one) prohibiting the teaching of CRT in the classroom. The government should not be in the business of saying what students shouldn’t learn beyond forbidding violations of the First Amendment (e.g., you can’t teach creationism or Intelligent Design because they’re forms or religion) or the purveying of arrant lies, which should be handled by schools themselves.

But by giving money to schools in this one specific area, the Biden administration is ensuring that cash-strapped schools are going to board the CRT train. And once they do, that’s it. As Ignatius of Loyola might have said, “Give me the children until they are ten and I will give you the future, including politics, universities, and the liberal media.”

According to author Kurtz, this is only the beginning. I have no knowledge of this area, so I just present his claim:

The programs immediately targeted by Biden’s new priority criteria for American history and civics grants are small. Once in place, however, those criteria will undoubtedly influence the much larger and vastly more dangerous “Civics Secures Democracy Act.” That bill would appropriate $1 billion a year, for six years, for history and civic education. Support for leftist “action civics” is already written into the priority criteria of the bill itself. I have argued that additional anodyne-sounding priority criteria in the Civics Secures Democracy Act — criteria favoring grants targeted to “underserved” populations and the mitigation of various racial, ethnic, and linguistic achievement gaps — would be interpreted by the Biden administration as a green light to fund Critical Race Theory in the schools. The new draft federal rule for grant priority in American history and civics education makes it clear that this is indeed the Biden administration’s intent.

And Kurtz may well be right.

I’m not sure how Uncle Joe let his agenda be hijacked by the Woke, as it wasn’t clear that this would happen, but I can assume only that he has loud voices yelling in his ear to get this stuff done. We already know that the Woke are louder than the Rational. It’s up to us to fix that disparity.