Because the “progressive” Left brooks no criticism, if you’re against the pernicious form of anti-racism promulgated by the people John McWhorter calls “the elect,” or are worried about the divisiveness and hatred that, ironically, is promulgated by Critical Race Theory, then you wind up finding yourself in bed with some unsavory people—as if you had a drunken assignation with someone who, by daylight, is repugnant. And by that I mean some of the more extreme conservatives.

So it’s a bit of a relief to find an ally in someone with impeccable liberal credentials, who’s advocated for free speech, women’s rights, and who was a board member of the American Civil Liberties Union for years. I’m speaking of lawyer and author Wendy Kaminer, who is only two days older than I am. I’ve read several of her books and always found her not only liberal, but levelheaded and clear in her thinking. And her article in a recent Tablet, on the invidious nature of compulsory race and bias training (a piece that would never, of course, appear in the New York Times), should be read as the views of a left-centrist.

Click on the screenshot to see the article (scroll down after clicking): 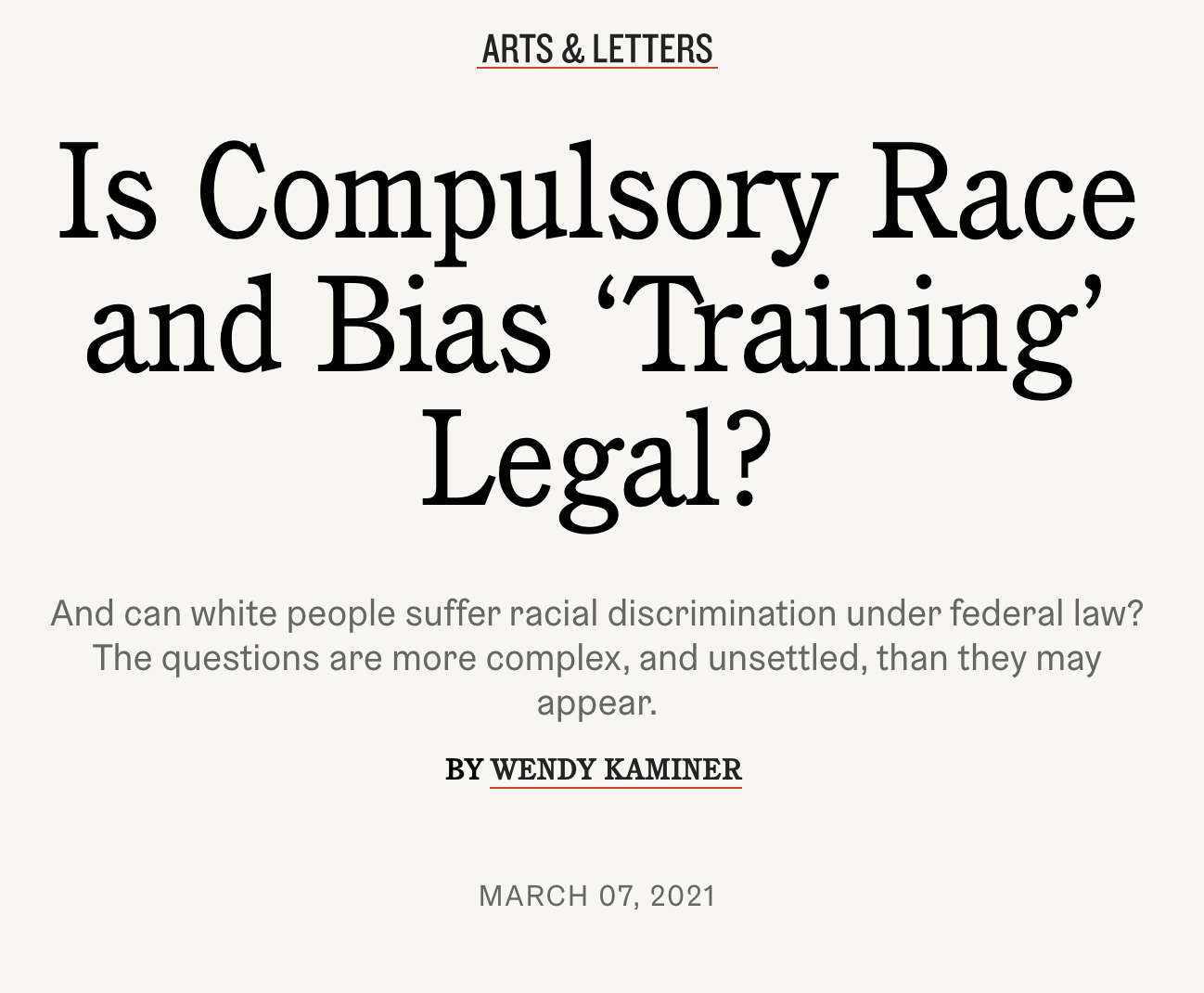 The answer to Kaminer’s question is “probably not,” for, as she argues, even left-wing judges would be loath to deny to whites the same kind of protections against racially based opprobrium that they would give to blacks. Just as one cannot force black people to get training to overcome any bias against whites, and be criticized in a group because of their skin color, so the reverse must hold as well, regardless of one’s admirable intentions. Nor can the government, at least in public institutions, “prescribe what shall be orthodox in politics, nationalism, religion, or other matters of opinion, or force citizens to confess by word or act their faith therein.” (This is a quote by Supreme Court Justice Robert H. Jackson in a case which prohibited schools from forcing students to salute the American flag.)

Yet such forced profession is precisely what bias training, as described by Jodi Shaw, intends to do: compel its consumers to admit to their biases and racism, even if they don’t feel they’re bigots. Kaminer describes the case of Jodi Shaw, which we already know about. Although her complaint is against a private school (Smith “College”), Shaw’s upcoming lawsuit could be based on “state and federal workplace discrimination.”

Kaminer also details a case brought by a Nevada student against his charter school, and I haven’t described this. Here’s Kaminer’s summary:

High school senior William Clark and his mother, Gabrielle, are suing Democracy Prep, a Nevada charter school, for punishing William, subjecting him to a hostile educational environment, and threatening to deny him a diploma for refusing to participate in mandatory social justice training. The curriculum, titled “sociology of change,” declared that “reverse racism doesn’t exist,” and required students to “make professions about their gender, sex, religious and racial identities”; it then “subjected those professions to interrogation, scrutiny, and derogatory labeling,” Clark’s complaint alleges. William, a light-skinned, mixed-race student, is the only apparent white student in his class, and his various identities, including his Christianity, categorized him as an oppressor: According to the curriculum, he had an “inherent belief in the inferiority” of others and was instructed to “unlearn” the principles instilled in him by his mother, a conservative Christian.

The Clarks are seeking an injunction in federal court allowing William to graduate, deleting his failing grade for the course, and demanding monetary damages. They invoke his rights under federal equal education guarantees (Title VI and Title IX) and his First Amendment right against compelled speech. . .

Given the intransigence of CRT advocates, it will take lawsuits like these to force them to stop the indoctrinations. And it’s helpful for those of us who hold views that could get us tarred with phony “racism” epithets to nevertheless make our cases, rationally. As Kaminer notes in the video below, many students indoctrinated in this stuff simply haven’t learned how to argue rationally, and just hurl names or yell instead.

While Kaminer, who says she’s an “old fashioned liberal,” is a bit worried by having to associate by groups that are on the extreme right, she nevertheless lays out her views, to wit:

We don’t always enjoy the legal right to act on our convictions, but we should enjoy an inalienable freedom to harbor and express them. Anti-racism programs that aim to compel students and employees to “unlearn” their beliefs, and internalize new, ideologically mandated self-images, violate fundamental freedoms of speech and conscience. The likelihood that they’ll succeed mainly in promoting self-censorship and insincere self-flagellations doesn’t mitigate their intolerance of dissent and intrusive authoritarianism.

Does structural racism exist? I believe so. But sending white people to mandatory thought reform camps seems more likely to impede than advance efforts to redress it. Do many, maybe most of us, harbor unconscious biases? Probably. But they’re not the business of our teachers or employers, much less our legislators.

Social justice/anti-racism trainers who disagree and consider me a racist are free to evangelize, and those white people eager to prove their allyship are free to submit voluntarily to their preaching. Others should be free to debate and reject it, in schools and workplaces, without suffering retaliation. It doesn’t matter if the cause of anti-racism trainers is just, when freedom of conscience is at stake: “Struggles to coerce uniformity of sentiment in support of some end thought essential to their time and country have been waged by many good as well as by evil men,” Justice Jackson wisely wrote in Barnette. “Those who begin coercive elimination of dissent soon find themselves exterminating dissenters.” Of course anti-racism training refuseniks don’t risk extermination, but they do risk the loss of educational opportunities and employment on account of their race—as the cases of Jodi Shaw and William Clark make clear.

Can white people suffer race discrimination? Apparently. Discrimination is the resort of people in power, as social justice warriors correctly assert, and they hold power in compulsory anti-racism trainings and the structures that support them. As mere human beings, they’re not above abusing it.

Here’s a six-minute video from FIRE (the Foundation for Individual Rights in Education) giving Kaminer’s views of free speech, offensiveness, and bullying (the social-media form). You may have heard these views already, but it’s good to hear them reinforced.

Another reason for opposing this mandatory (as opposed to optional) training, is that it doesn’t seem to work, with any changes quickly disappearing with time. The article below (surprisingly, from The Guardian) suggests that there are better and more permanent ways to improve race relations in and out of the workplace, including voluntary training, training developed locally rather than sourced from the outside, and focusing on positive rather than negative consequences (e.g., lawsuits).  And there are more mechanistic changes that seem to work:

Once that information is found, tried and tested methods can create change. Having a system where managers train people to move up through the ranks, rather than relying on an ad-hoc promotion system works well, particularly for women. Putting in “special recruitment structures” – which basically means you no longer recruit exclusively at historically white colleges, but also approach historically Black universities, or engineering programs with lots of women in them, also works well.

Mentorship programs that are open to everybody – so that women and people of color get mentors even if they’re at the lowest levels of a firm – are also a good way to ensure talent can rise.

“We know what kinds of systemic changes promote diversity. Pointing the finger of blame at managers, and trying to adjust their individual bias, they just don’t work. So, to me, it’s just, it’s crazy that companies are still doing these things,” explains Dobbin.

So is diversity training just a money-maker, I ask Kalev?

“Most diversity training doesn’t work. Most of it is not for free. So you can do the 1+1,” she says. 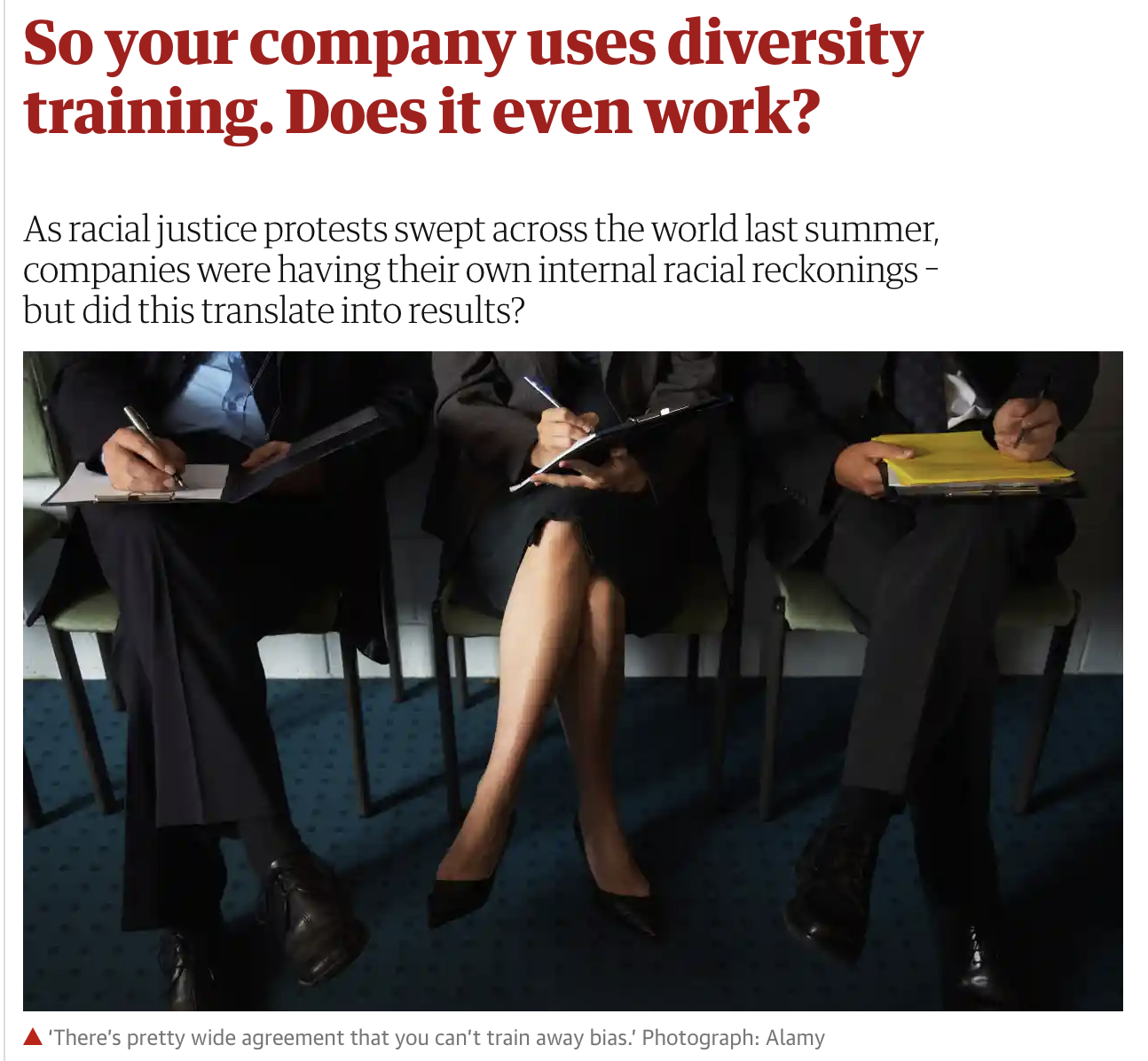 26 thoughts on “Wendy Kaminer on free speech, compulsory race and bias training, and why they’re related”