The people who run the “Letters’ section of Conversation, where Adam Gopnik and I are debating “ways of knowing”, are trying to set up debates between proponents and opponents of Critical Race Theory (CRT). The problem is that the proponents are happy to give public lectures, but not so happy to debate. As far as I’m aware—and I may be wrong—neither Ibram X. Kendi nor Robin DiAngelo, who have written the two most influential popular books on CRT, have been willing to debate their views.

Conversation is trying to set up such a debate, preferring to do it as a video rather than an exchange of letters, and has reached out to both DiAngelo and Ayaan Hirsi Ali. They have just started a Crowdfunding site where you can pledge money to underwrite the debate, and all the funds are earmarked for charities, not for the speakers.

Moreover, if the debate doesn’t take place, you can get your donation back, or have it go straight to the charity:

Click on the screenshot below to go to the site (and to pledge if you wish): 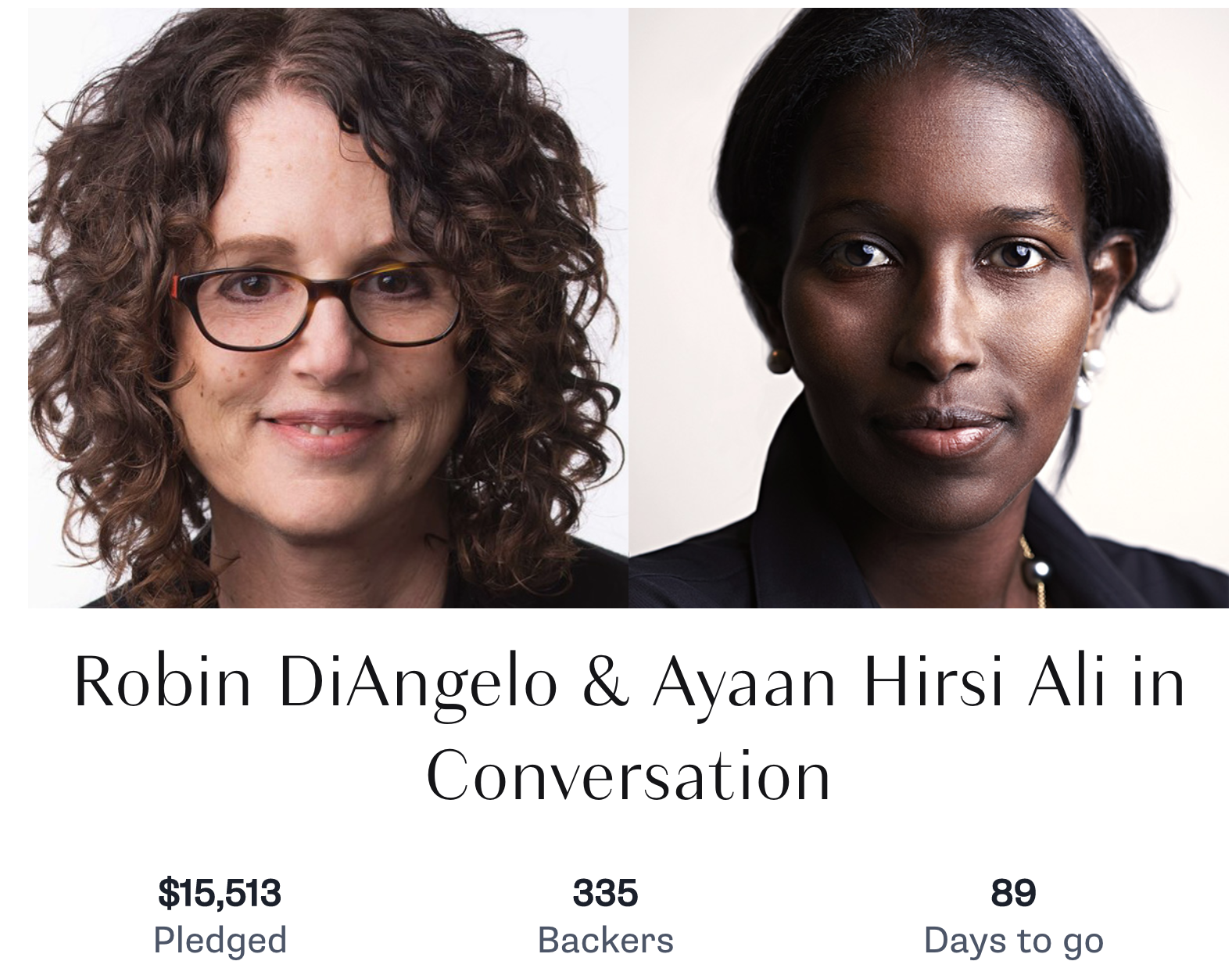 The topic will clearly involve identity politics and/or CRT; here are the campaign’s biographies:

Robin DiAngelo’s 2018 book, White Fragility: Why It’s So Hard For White People To Talk About Racism, debuted on the New York Times bestseller list where it remained for 85 weeks.

Ayaan Hirsi Ali is a best-selling author and human rights activist. As a proponent of individualism, she has expressed concerns about identity politics and its capacity to erode our sense of common humanity.

Ayaan Hirsi Ali has already accepted, but DiAngelo has not—at least not yet.

I would be happy to have a conversation with Robin DiAngelo, and I’m delighted to help raise funds for Starehe, a fantastic school very close to my heart.

I suppose the philosophy is that the more money that’s pledged, the more willing people would be to participate in such a debate, because, after all, the money is to go to educate poor kids in Kenya. There are 90 days left in the pledge drive, which started less than two days ago, and if the debate doesn’t take place, well, you have nothing to lose by underwriting it.

The likely correlation between pledges and the probability of a debate comes from realizing that it’s hard to resist doing a bit of talking to garner a big donation for the education of poor African kids. Both DiAngelo and Hirsi Ali would surely have an interest in that education.  It’s also “bad optics” if you refuse to debate when there’s a sizable donation to a worthy charity at stake.

But some cynics don’t think it will take place: 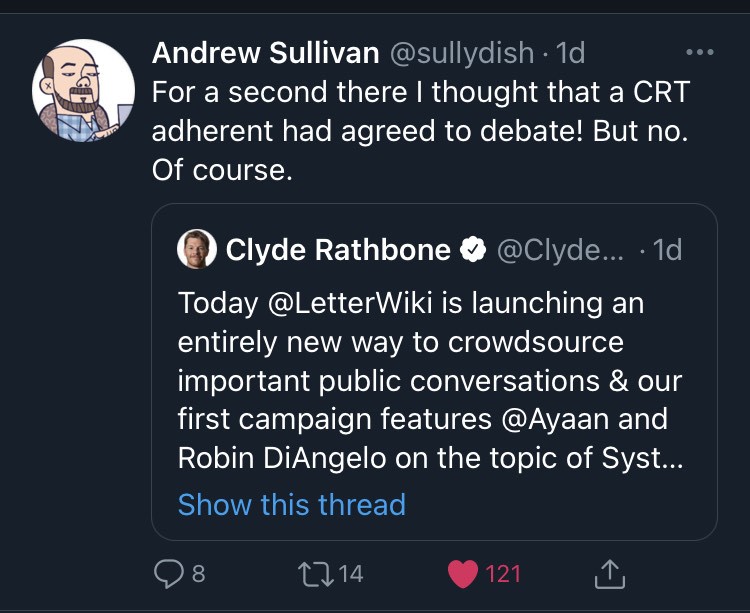 I don’t know if they reached out to Kendi yet; I suggested that they try to set up a debate between him and McWhorter.  I know that McWhorter has agreed to such a debate a while back, but Kendi refused, despite having said that he’s willing to debate his ideas with anybody who’s a genuine university professor (weird, eh?), and certainly McWhorter fills the bill. 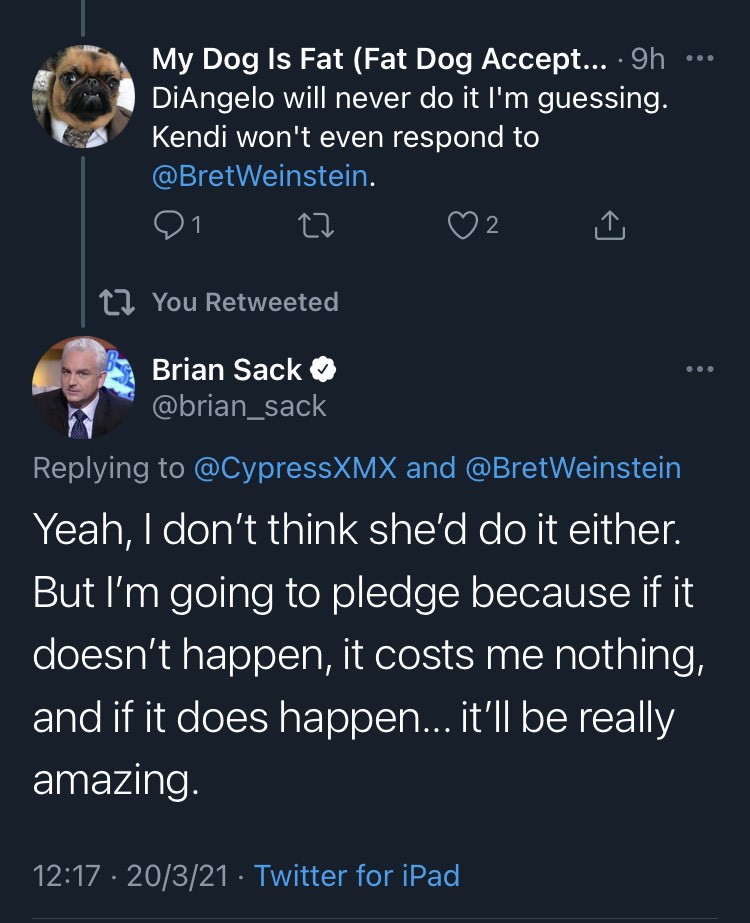 It would be fun to see a back and forth between these folks (and between Kendi and McWhorter), so if you want to underwrite the debate, click on the screenshot above—or here. There’s a FAQ section with questions about funding and the like.

Feel free to weigh in below as to whether DiAngelo will accept. I’m not holding my breath.