As I’ve noted here before, many colleges have either made the submission of standardized tests (SATs and ACTs) optional for applications because of the pandemic, or are contemplating forbidding the submission of test results. The situation arose because of the pandemic, for you have to take the tests in big halls crowded with people. Nevertheless, many students were able to take the tests anyway.

Many colleges are also contemplating making the optionality permanent, so that students no longer have to take the Big Two standardized tests at all. My own view is that the tests will eventually no longer even be used, the reason being that their use has highlighted racial disparities in outcomes, and, as Ibram Kendi maintains (and many believe), these disparities are the result not just of racism, but continuing structural racism.

The Wall Street Journal article below is the first I’ve seen that discusses the results of making tests optional. Click on the screen shot to read it, though it may be paywalled.  This seems to be from the paper’s “news” section, which I’m told is not slanted rightward at the WSJ, though editorials are. (But of course the NYT is slanted left.) I say this only because some readers judge an article by its source, not its contents.

The authors of this piece are Melissa Korn and Douglas Belkin, and at the link you can also listen to the article.

The clearest result is that the test-optional system has hugely increased the number of applicants, but mainly at “prestige” schools. The only reason I can give why that happened is that students think they stand a higher chance of getting in without test results. That tells you something, I suspect, but what?

Excerpts from the article are indented. First, the glut:

Harvard University received more than 57,000 freshman applications for next fall’s entering class, a 42% year-over-year jump. Yale, Columbia and Stanford universities were so overwhelmed they also pushed back the date to announce admission decisions. The University of Southern California’s applications pool beat the prior record by 7%. And New York University topped 100,000 applications, up 17% from last year.

This increase, documented for “highly selective schools” in the first figure below, is not because universities have expanded their class sizes. 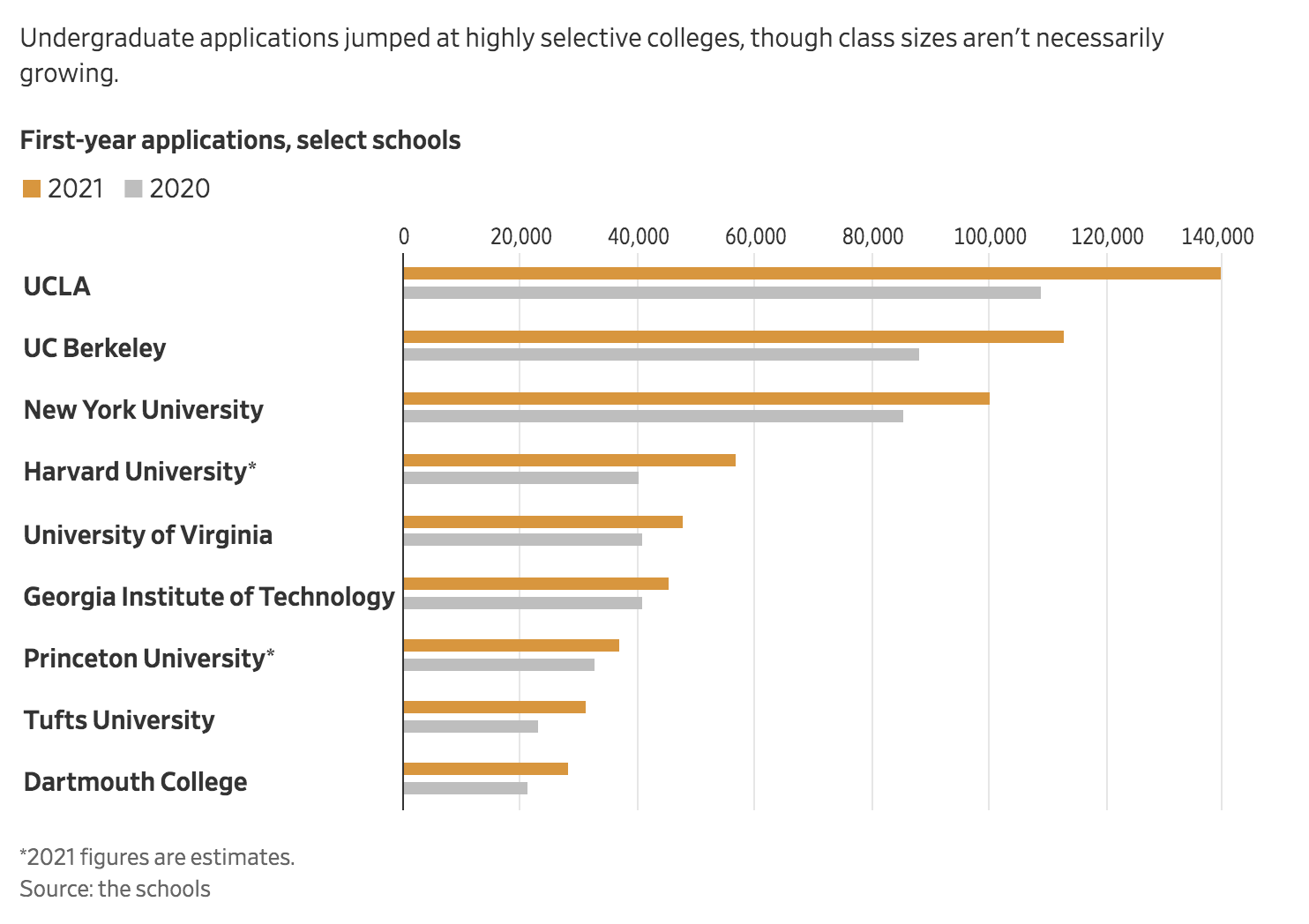 The uptick in applications is correlated with the prestige and selectivity of the university—qualities that are themselves correlated. 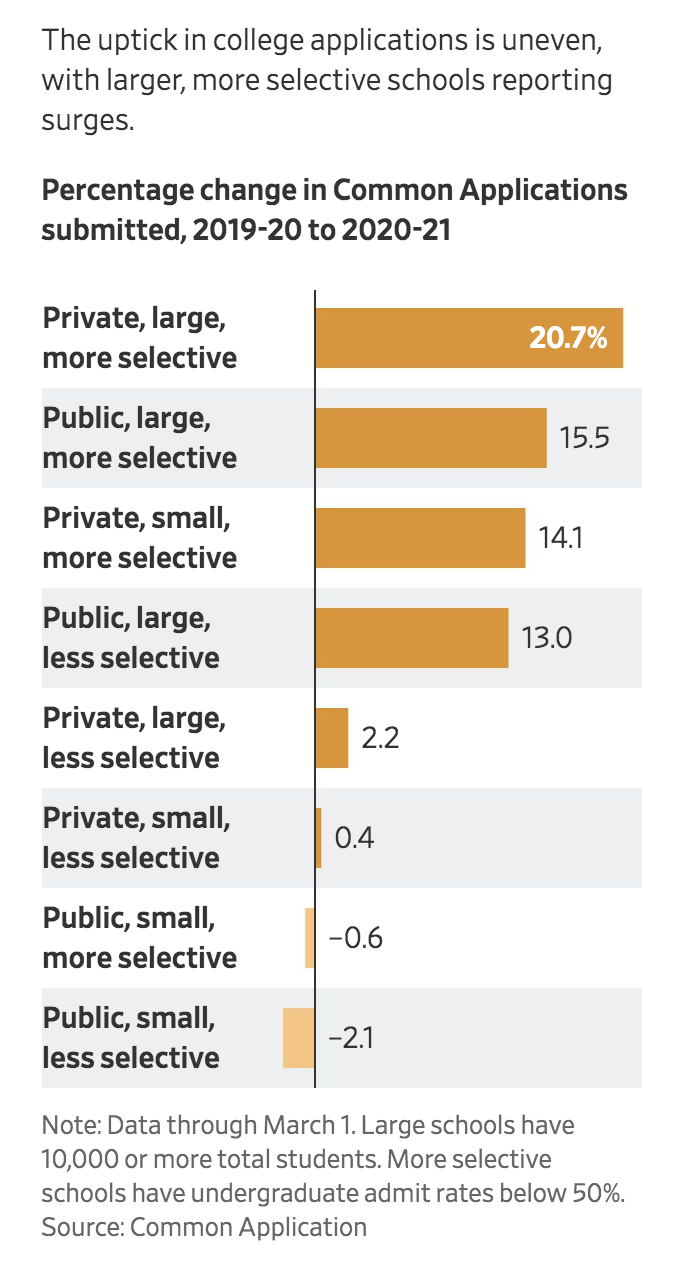 Some readers have applauded the demise of required SATs and ACTs, saying that they measure only family wealth (money spent on quality education and test tutorials) and not accomplishment or learning, but that’s not completely true. And at least the test results correlate strongly with success in college and afterward (this being America, “success” is measured by income).

This problem brings up a second one: how can colleges deal with this increase in applications, especially because one criterion that was important—standardized tests—are now gone? And, to my surprise, most of the admissions people seem to regret the absence of these tests. A few quotes:

“Kids are sending out more applications out of nervousness, out of anxiety, just saying, ‘Let’s see what happens,’ ” said Cynthia Rivera, who oversees counseling at New Canaan High School in Connecticut. Seniors there applied to an average of 10 schools this year, up from eight last year.

Greg Roberts, dean of undergraduate admissions at the University of Virginia, is concerned about whether the soaring numbers affect his team’s ability to stay focused while reviewing applications. Applications there rose by nearly 17% this year; 43% didn’t include standardized test scores.

“The fear is that your team gets exhausted and beaten up reading so many applications all hours of the day for six months, and the end goal is a number and not a person,” Mr. Roberts said. “Can colleges and universities continue to read in a way that allows them to make the best, most thoughtful decisions when they’re dealing with such a high volume? I don’t know the answer to that.”

The pandemic “is calling on us to walk the talk,” when it comes to thinking more broadly about assessing applicants, said Lee Coffin, vice provost for enrollment and dean of admissions and financial aid at Dartmouth College. Dartmouth saw a 33% rise in applications after it waived standardized test scores this year.

Mr. Coffin says he is conflicted about going test-optional. Before the pandemic Dartmouth considered standardized test scores to be among the most important information alongside grade point average, essays and class rank. Seeing strong scores helps his team feel more confident that admitted students could cut it at the Ivy League institution. “It becomes a moral question,” he said. “I don’t want to admit someone who is going to struggle.”

Some veterans in the field are skeptical that waiving standardized tests alone will have a big impact. Sam Bigelow, director of college counseling at Middlesex School in Concord, Mass., said some underrepresented students may get a boost without borderline test scores holding them back.

“But I don’t think it’s tipping the scale on access and equity,” he said. “More than anything else it’s just making these applicant pools disturbingly big. It’s by and large just making more kids for them to reject.”

Grade point averages (GPAs), which are another critical number, aren’t that useful this year when many high schools have gone to a pass-fail system. This makes a shambles of “holistic evaluations” which are intended to give a “whole person” assessment, but are highly subjective, especially without GPAs or test scores:

Admissions officers at top-ranked colleges and universities have long boasted of conducting a holistic review of applicants, putting academic qualifications into context. Did a teen take the hardest courses offered at her high school, or pull straight-A’s with less-challenging classes? Did a candidate maintain a 3.9 GPA with few distractions, or while working part time at the drive-through, taking care of an ailing parent and playing varsity soccer?

And who deserves priority for a coveted spot: the one who thrived on an easier path, or the one who did all right despite having a more hardscrabble background?

The result of this glut is that students are submitting test scores only to less selective schools, presumably because they don’t think their scores would help them. Again, what does this mean?

An academic high achiever, Ms. Sayed is enrolled in a prestigious STEM program that draws top students from the city’s three public high schools. She said she has a 4.2 GPA and ranks in the top 2% of her class. But her SAT test, which she finally took in October after two cancellations, was a disappointment. She said she scored below her target of 1400, which itself would have placed her below the 25th percentile for the current first-year class at Stanford University, one of her targets.

So she pivoted, submitting her SAT score only to safety schools where she would measure up well, and omitting it for the others. Her final list included local options like Wayne State University and the University of Michigan—to which she has already been admitted—as well as Harvard, Yale, the University of Chicago and the Massachusetts Institute of Technology.

“It was a lot easier to apply to some of those higher-reach schools” without the score, said Ms. Sayed. “It didn’t feel like I was at a disadvantage. Why not just shoot my shot?”

Were I Ms. Sayed, I wouldn’t have gone public with this in the pages of the Wall Street Journal!

I still think the test scores give admissions officers useful information about the applicant. You can say that they’re not correlated with smarts or with learning, and that they simply index familial wealth, but presumably admissions officers would be cognizant of that were it true. And there’s no denying that the test scores are highly correlated with how well students do in college.  As the Dean of Admissions at Dartmouth said “I don’t want to admit someone who’s going to struggle.”