The article below, from Quillette, is by Eric Kaufmann, a professor of Politics at Birkbeck College of the University of London, who works with the Center for the Study of Partisanship and Ideology (CSPI).  Kaufmann’s paper reports on a study of attitudes towards free expression in the U.K. and U.S. His U.K. work led to  a CSPI report that apparently became the basis of an official UK government policy paper on Academic Freedom and Free Speech that will likely become U.K. law.

You can click on the screenshot to read the piece for free; below I’ll just list Kaurfmann’s major findings and then his conclusions, which involve government intervention to ensure the freedoms he wants preserved. Note that the sample size was not large. 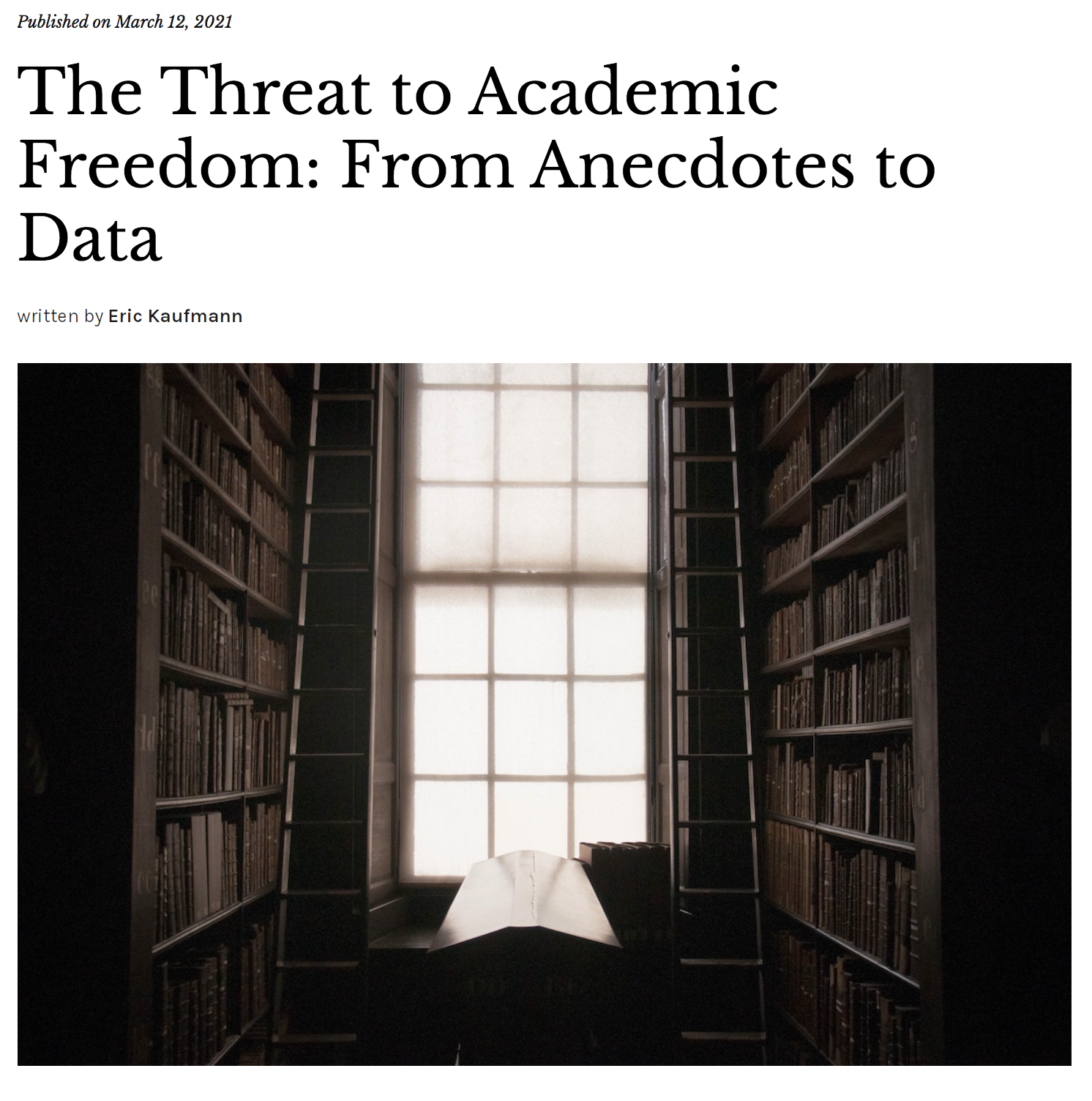 a.)  Few academics have been subject to threats or disciplinary actions over their speech, but it’s been far more frequent in the U.S. than in the UK.

b.) Right-wing academics, especially if they are Ph.D. students, experience threats and disciplinary actions far more often than do left-wing academics.

c.) While most academics would not support campaigns to oust other academics who take unpopular possessions (Kaufmann gives a list of five hypotheticals, of which I put two below), a substantial proportion (around 40%) would remain neutral, not opposing campaigns to fire professors. This is a “silent moiety” that, says Kauffmann, are enablers of those who censor others.

Here are two of his five examples of unpopular positions that were used to query his subjects; these are based on real episodes on campuses:

d). Roughly half of academics, and a large majority of Ph.D. students, support “diversity quotas” for reading lists.

e). Support for dismissing academics who hold unpopular positions decreases significantly with age (5 classes from 35 to 65 years old). It’s the young folk who are the authoritarians.

f). Self-reporting by academics on whether they find themselves in a hostile climate for their beliefs was much higher for right-wing academics than for far-left, fairly-left, or centrist academics. This is true in both the U.S. and U.K.

Not much of this surprised me—with the exception of high support for diversity quotas on reading lists.

Because Kaufmann’s UK research actually translated into government action, he sees using the government as a way to ensure academic freedom. I’m not completely convinced of using that route, though. Here are what he recommended for the UK, with the first what the government is apparently going to do:

Importantly, most of our recommendations were adopted in the government’s new Academic Freedom white paper, which is likely to become law later this year. Foremost among these is the creation of the new position of Academic Freedom Champion on the Office for Students (OfS), the sector regulator. This individual will be tasked with proactively auditing universities for compliance with their free speech duty to not only defend, but promote, academic freedom. In addition, this office will act as an ombudsman to hear cases from individuals whose rights have been abridged by their universities. The new bill gives the regulator teeth to fine universities, which is vital. Only if the cost is high will administrators be able to face down activists and tell them that they cannot restrict the freedom of dissenting academics, no matter how much they wish to do so.

. . . our recommendations also include an explicit mention of political discrimination as grounds for bringing a complaint against a university. I recommend that university officers, when speaking in an official administrative capacity, be governed by a duty to remain politically neutral on any issue not directly concerned with the university’s narrow sectoral self-interest.

This is all contingent, of course, on the first recommendation: that there be a government body to ensure academic freedom, headed by one individual (a Big Brother?). That seems dangerous, for that individual has enormous power to shape academia via fining universities. There’s a danger that that individual, rather than being neutral, might help bend academic discourse towards what’s acceptable to the current government. As Hitchens used to say, “Who would you entrust to do that job?” I prefer the alternative of private-sector pressuring, as is done by the Foundation for Individual Rights in Education and similar organizations like the AFA, which has the power to bring lawsuits against universities.

As for the second, I’m heartily in favor of it, for it is the embodiment of the University of Chicago’s Kalven Principle that the University take no official ideological, moral, or political positions—with a few rare exceptions.

As for the third, I’m not sure. While viewpoint diversity is desirable as well as ethnic diversity, there’s a rationale for promoting ethnic diversity that doesn’t hold for other forms. And that rationale is to increase ethnic diversity as a form of reparations for bigotry in the past. That is affirmative action, and I’m in favor of a limited form of it.

24 thoughts on “How to ensure academic freedom”