It’s gotten to the point that I can’t bear to keep describing the wokeness metastasizing through the body of American’s public and private schools, and I’m not even referring to colleges. Since I’ve described this in extenso, I’ll just point you to this free article by Bari Weiss, who interviewed over two dozen parents, students, and teachers at private prep schools—schools that charge up to $50,000 a year in tuition, which is Ivy League money. Click on the screenshot to read her piece, which was first published in the City Journal:

Why worry about this? Because these affluent and well-educated students, once dosed up with propaganda, will of course go on to become America’s leaders.

“I am in a cult. Well, that’s not exactly right. It’s that the cult is all around me and I am trying to save kids from becoming members.” He sounds like a Scientology defector, but he is a math teacher at one of the most elite high schools in New York City. He is not politically conservative. “I studied critical theory; I saw Derrida speak when I was in college,” he says, “so when this ideology arrived at our school over the past few years, I recognized the language and I knew what it was. But it was in a mutated form.”

This teacher is talking with me because he is alarmed by the toll this ideology is taking on his students. “I started seeing what was happening to the kids. And that’s what I couldn’t take. They are being educated in resentment and fear. It’s extremely dangerous.”

The science program at Fieldston would make any parent swoon. The electives for 11th- and 12th-graders, according to the school’s website, include immunology, astronomy, neuroscience, and pharmacology.

But physics looks different these days. “We don’t call them Newton’s laws anymore,” an upperclassman at the school informs me. “We call them the three fundamental laws of physics. They say we need to ‘decenter whiteness,’ and we need to acknowledge that there’s more than just Newton in physics.”

One of her classmates says that he tries to take “the fact classes, not the identity classes.” But it’s gotten harder to distinguish between the two. “I took U.S. history and I figured when you learn about U.S. history maybe you structure it by time period or what happened under each presidency. We traced different marginalized groups. That was how it was structured. I only heard a handful of the presidents’ names in class.”

It goes on, and it’s pretty depressing.

Now, like Andrew Sullivan, Weiss is publishing her readers’ reactions to her column. This one, which just came out, has both positive and negative views of the situation. Click on the screenshot: 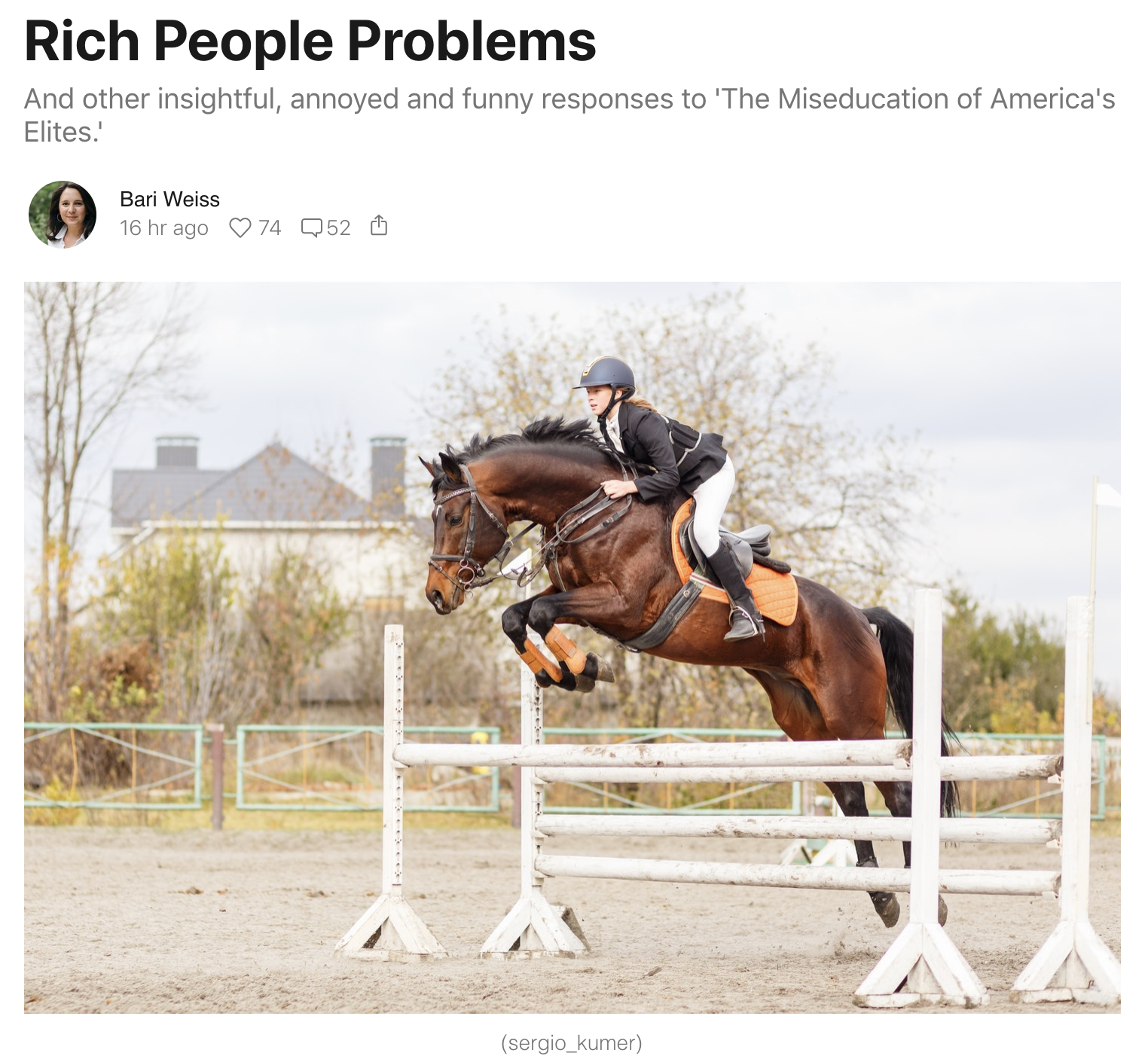 One objection, as you can gather from the title, is this:  why should we bother with how these fancy private schools operate? I gave one response above. Weiss gives another: public schools (Los Angeles is a good example) are going the exact same route.

Another query was why these rich and powerful parents don’t put their foot down about their children’s education. There’s no clear answer, but I suspect that it’s easier to get along if you go along, and these schools are often gateways for admission to America’s best colleges.  Some readers thought Weiss exaggerated the problem, others worried about how biracial children would fare in such schools, and one raised the issue that it’s hard to judge a school’s wokeness before you enroll you child.

If you want an example of how one ritzy school has melted down, check out my post on The Dalton School in Manhattan (tuition: $54,000 per year).